British man, 20, is killed in a moped accident in the Philippines

The family of a British holidaymaker who was killed in a moped accident in the Philippines suffered further anguish when they were told to pay for the damaged scooter.

Jack Whitelaw died on the island of Siargao last Monday when he crashed on a dark road and ploughed into a tree with nails sticking out of it.

His father Paul said the 20-year-old had been allowed to hire a motorcycle from a hostel despite not having a licence – accusing the hostel of breaking the law.

To make matters worse, the 57-year-old father then received a text from the hostel asking him and his wife Suzy to pay for repairs to the crashed scooter.

‘My thoughts right now are that anger has turned to rage,’ he said.

‘The company want me to pay for the motorcycle that he broke. Well my son has paid with his life, so I am fighting for justice for Jack.’

Jack Whitelaw, pictured with his sister Molly, died on the island of Siargao last Monday when he crashed on a dark road and ploughed into a tree with nails sticking out of it 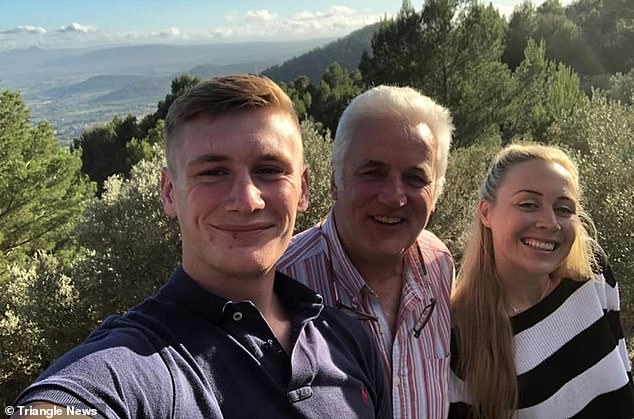 Jack, pictured with his father Paul (centre) and sister Molly (right), had hired a moped from the Lukay Resort hostel in the Philippines 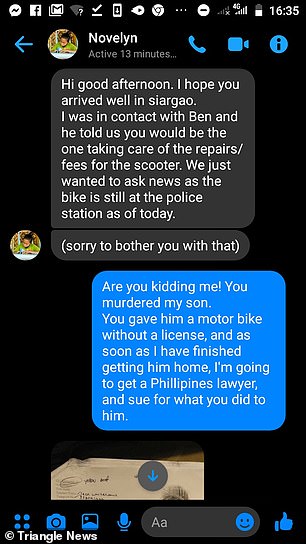 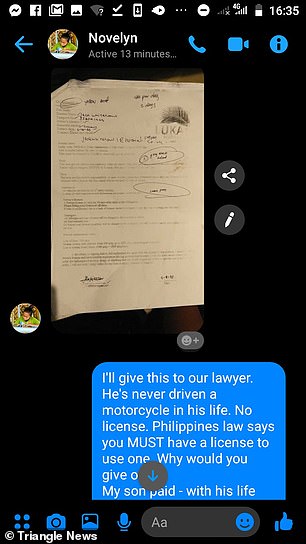 Paul Whitelaw received these texts from a staff member at the Philippine hostel, asking about ‘repairs/fees’ for the crashed scooter

Jack’s father received the message from the Lukay Resort hostel when he arrived in the Philippines to repatriate his son’s body yesterday.

A staff member called Novelyn made contact after speaking to Jack’s work friend Ben Sinclair, with whom he was travelling.

The message read: ‘Hi good afternoon. I hope you arrived well in Siargao.

‘I was in contact with Ben and he told us you would be one taking care of the repairs/fees for the scooter.

‘We just wanted to ask news as the bike is still at the police station as of today. Sorry to bother you with that.’

An outraged Mr Whitelaw replied: ‘Are you kidding me! You murdered my son.

‘You gave him a motorbike without a license and as soon as I have finished getting him home, I’m going to get a Philippines lawyer and sue for what you did to him.’

Undeterred, the hostel worker then sent Mr Whitelaw a copy of the form Jack filled in when he hired the bike.

Mr Whitelaw replied: ‘I’ll give this to our lawyer. He’s never driven a motorcycle in his life. No license.

‘Philippine law says you MUST have a licence to use one. Why would you give one? My son paid with his life.’ 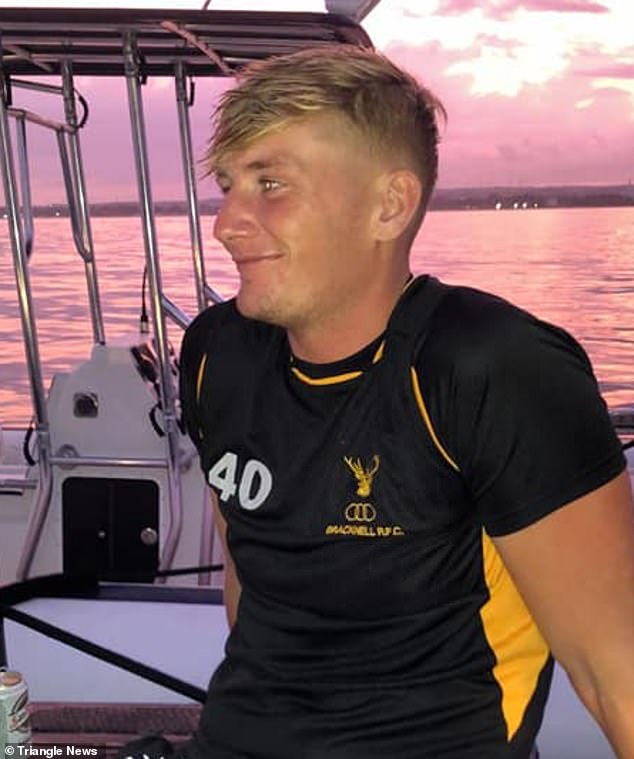 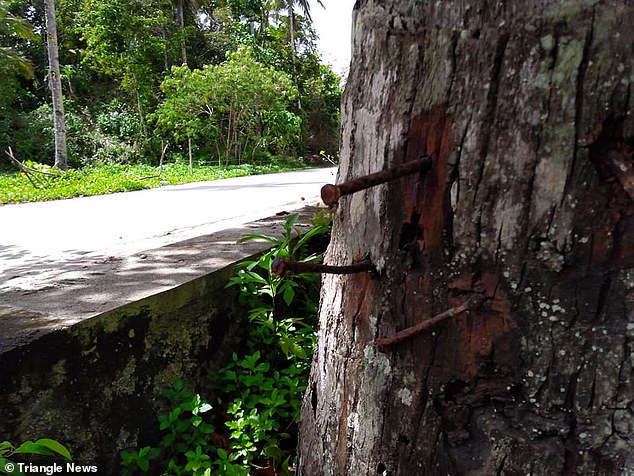 Jack, of Bracknell, Berkshire, was hailed by his sister Molly as a ‘best friend’ who ‘lived life until the absolute fullest and made every moment count’.

‘There are no words to describe how much my heart hurts and how much I miss you already,’ she said.

‘You made every single person in every room laugh until their cheeks hurt.

‘I told you everyday, but you’ll never fully understand how much I really love you. I feel so lucky that I got to be your big sister.

‘You inspired me everyday with your positivity, loyalty and commitment to life.

‘Gosh I loved every minute of being your sister. I love you so so so so so much.

‘You made me so proud. I’m already counting down the days until I get to see that big cheesy grin on your face with open arms for the best cuddle ever.

Jack’s father said: ‘Jack will forever remain in our memories as the boy who will never grow up, our very own Peter Pan.

‘Free living, generous, kindhearted soul who saw good in everyone, lived each and every day making other people smile.’ 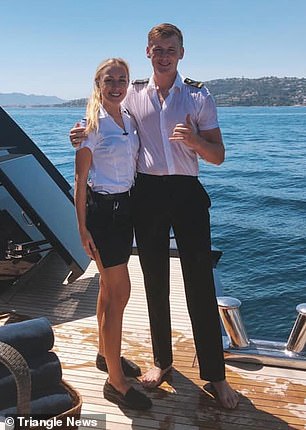 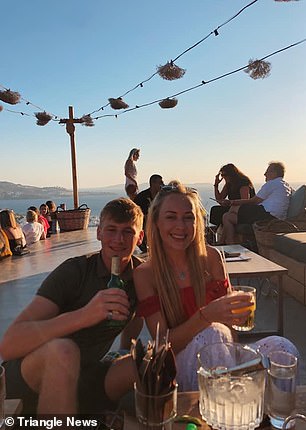 Mr Whitelaw, the director of a musical company, added: ‘What happened to Jack was avoidable.

‘In the Philippines, and I hope, anywhere in the world, you have to have a license to ride a moped.

‘Jack had no license, he could drive a car, he hated tests of any kind, and so, had never passed his driving test.

‘He had no experience in riding in a pothole ridden island at night during the rainy season in the tropics.

‘They added an “illegal” waiver, saying he’d be responsible in case of an accident. Jack, being a lad, signed it, and lived for a day.’

The hostel later sent Paul another message in which they retracted the request for payment but said they had not done anything illegal.

It read: ‘Is very hard to live with it even though we did not do anything illegal but I feel responsible.

‘Unfortunately in Siargao every week and sometimes everyday there is a fatal accident. The roads are dark and people are drinking.

‘I do apologise for asking you to pay for the damage but as I mentioned to you the police told me I should contact you.

‘Sir I will not ask you anything, as I know it is really hard situation to handle for you. I am sorry if there was any misunderstanding. We will never forget your Son. Novelyn.’