British man, 30, fell from French Riviera apartment after the balcony COLLAPSED ‘during sex’

British man, 30, fell from French Riviera apartment after the balcony COLLAPSED ‘during sex session’ with his Canadian partner – leaving him fighting for life

A British man left in critical condition after plunging from a holiday apartment in France fell when the balcony collapsed during a sex session, investigators believe.

The 30-year-old, who has not been named, was left with life-threatening injuries after falling head-first on to concrete from an apartment in Le Cannet, near Cannes, on Saturday.

After speaking with his partner, who is 28 and Canadian, police now believe the fall was caused by the apartment balcony collapsing, and are considering prosecuting the owners.

A 30-year-old British man who plunged from this apartment in southern France on Saturday fell when the balcony collapsed as he had sex with his partner, investigators believe

The partner suffered minor injuries and has been speaking to investigators.

‘There was a balcony collapse during the love making,’ said an investigating source. ‘Large fragments of the stone balcony surrounded the couple after the fall.

‘The couple were making love in open view, and then the balcony gave way, meaning they dropped around 3.5 meters [11.48 feet].

‘It was a very heavy fall, but the woman may have been cushioned by the man, who landed head first.’

Neighbours meanwhile reported ‘pool parties’ and ‘lots of fun and laughter’ before the tragedy in the holiday rental. 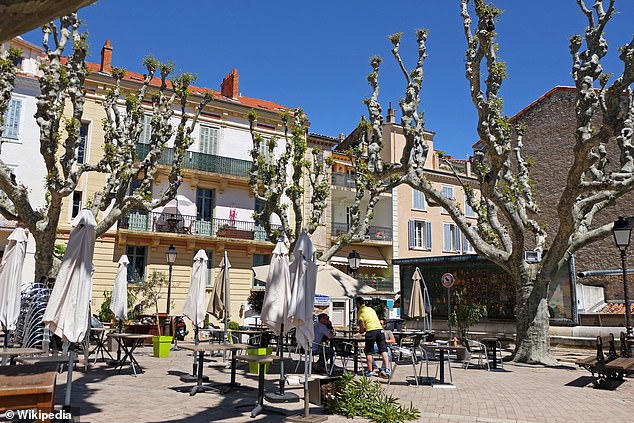 Police are probing whether alcohol or drugs were involved with the fall, but are considering charging the apartment’s owners with negligence (pictured, the nearby town of Le Cannet)

‘They were having a great time, all day and all night,’ said one. ‘This was absolutely fine because they were enjoying themselves on holiday, but nobody expected anything like this.’

The man was on Monday in an intensive care unit at the Pasteur Hospital in Nice, where family and friends were gathering.

Prosecutors have opened an investigation to try and work out whether alcohol or drugs may have been involved in the accident, and now the enquiry has switched to the building itself being unsafe.