British man, 36, dies after plunging from roof terrace of seventh-floor apartment block in Ibiza after ‘fight with flatmate’

By Danyal Hussain and Rita Sobot For Mailonline

A 36-year-old man, thought to be British, has died after plunging from the roof terrace of an apartment block in Sant Antoni, Ibiza.

Local media reports claim that the man fell from the seventh floor and into an inner courtyard this morning.

Emergency services rushed to the scene at 2am and two ambulances, the Civil Guard and local police found the dead man lying on the floor.

It was claimed that, before his death, the British man had argued with a flatmate at the block and a fight had broken out, leaving one of them with a head injury.

The British man, 36, fell to his death from the seventh floor of an apartment block in Sant Antoni, Ibiza 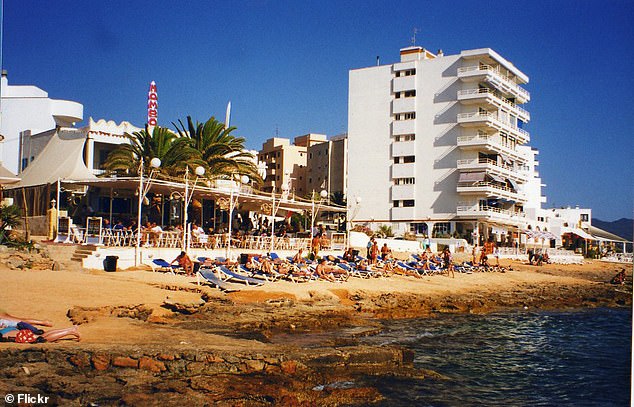 However, it is not thought anybody was with the man when he plunged to his death.

Medics said there was nothing they could do to save his life because of the severe injuries he had suffered in the fall.

At this stage, no details have been given about the circumstances or whether the dead man was on holiday or living in Ibiza.

The Civil Guard has taken charge of the investigation.

The man fell from a building known as Torre de San Rafael on Vara de Rey street in the town of San Antoni, a popular resort on the western coast of the Spanish island of Ibiza, one of the Spanish Balearic Islands.

A spokesman of the Spanish Civil Guard confirmed that the British man, whose initials are ‘CJN’, fell and said: ‘It is unknown if he was with friends or anything else as the case is being investigated.’

Pictures of the building seem to suggest it is a residential block of flats rather than holiday accommodation.

The apartments are topped with a roof terrace surrounded by railings.