British man languishing in Yemen prison where inmates and beaten, shackled and threatened with rape

The family of Luke Symons, a 27-year-old British Muslim arrested by Iran-backed Houthi militants in Yemen, have blasted the British government’s failure to secure his release after an Abu Dhabi-based newspaper reported that a senior Houthi official ordered his release last year.

Mr Symons, who was in Yemen working as a teacher while studying Islam, was attempting to flee the war-torn country in April 2017 with his Yemini wife and their son when he was arrested by Houthi militants at a security checkpoint in Yemen’s capital Sana’a on suspicion of spying.

According to his family, Mr Symons, who has Yemeni family members and moved to Yemen in 2012 shortly after converting to Islam, was arrested because he was carrying a British passport.

Luke Symons, 27, from Cardiff on his wedding day in Yemen in 2014. Mr Symons has been detained by Houthi militants since April 2017 after he tried to flee the war-torn country with his Yemeni wife and child

‘Kindly order the release of the British prisoner Luke Anthony Symons, who served two years in jail, as there’s no evidence at all against him,’ the document said.

Mr Symons British-based family claim he has been subjected to torture in prison, including being beaten and denied food.

New York-based human rights organisation Human Rights Watch have reported that Houthi militants were exploiting their powers to ‘turn a profit through detention, torture and murder.’ 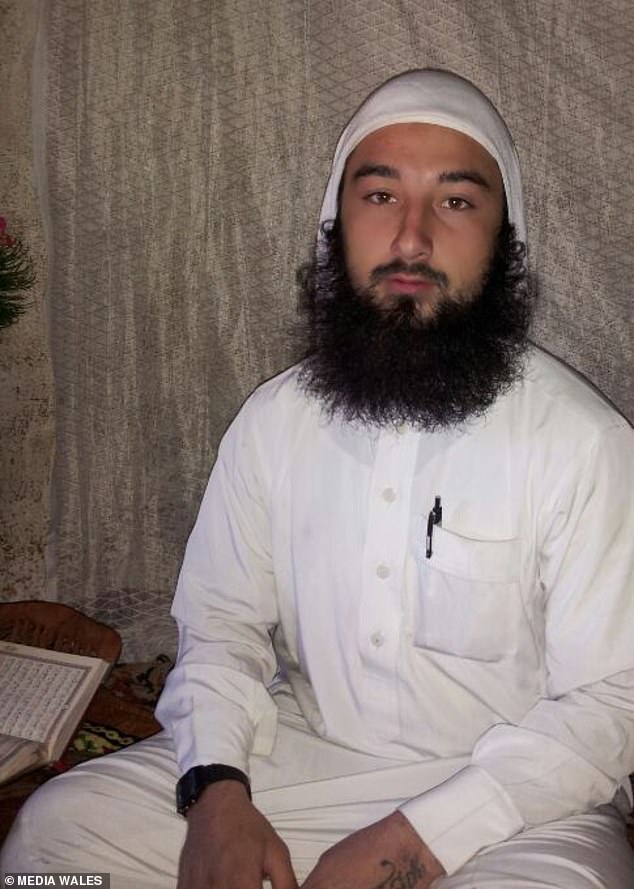 Mr Symons’ grandfather Robert Cummings said Luke, who has Yemeni family members, had converted to Islam in 2012 and moved to Yemen shortly after to study the religion

Speaking to MailOnline, Mr Symons grandfather Robert Cummings slammed the British government’s response to his grandson’s imprisonment, calling it ‘a disgrace’ and said that nobody has done anything with the release order his family had worked to obtain in Yemen.

Mr Cummings said that he had been to London three times to visit government ministers, but that no progress had been made.

‘The only reason we have this release document at all is that [Luke’s] brother-in-law appealed to Houthi courts,’ he said.

Mr Cummings blasted Theresa May’s handling of the situation, saying ‘when Theresa May was in charge, she was so tied up with the Saudis that she was no help whatsoever.’

‘The first six months Luke was held in prison this government would not even believe he was being held in prison, despite being told of his capture in the first week.’ 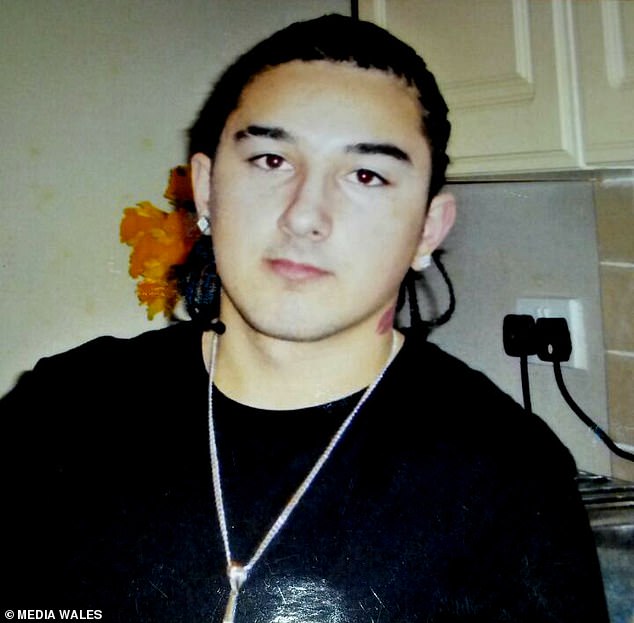 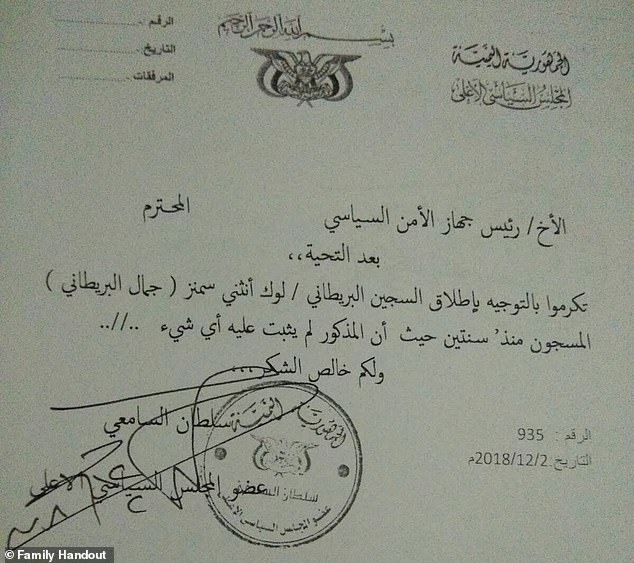 A document obtained by Mr Symons family, purported to be signed by a Houthi official, granting the release of Mr Symons and his exoneration from spying charges

‘Every bit of information this government has on Luke they have been given by us, we told them exactly what prison he was in,’ said Mr Cummings, ‘they have never done a damn thing.’

‘The only reason Luke is in prison is because he has got a British passport, and the government should admit to that,’ he said.

‘They know why he’s been detained, Luke has had his release paper for 12 months. Why hasn’t he been released? Has anyone put that paper to [the Houthis]?’

Mr Cummings said that he had spoken to Mr Symons just three times over the past year, and that his mental health was deteriorating.

The chairman of the South Wales Islamic Centre, Daoud Ali Salaman, a local Muslim organisation that has been assisting the family also criticised the government’s response, stating that the government only started paying attention thanks to the help of their local Labour MP Kevin Brennan.

Mr Salaman also condemned the Houthi militants who arrested Mr Symons, ‘they’re a bad lot, they just capture anybody that they catch in their path, including local Yemenis.’

Mr Salaman appealed to the British government to do more to help the family.

‘We hope that he is released and that he can return with his wife and son so he can live in peace, but he’s not getting much help from the British government here.’

‘He has been really doggedly fighting for his grandson, who is an unfortunate person caught up in the civil war in Yemen,’ he said.

‘Sadly, I don’t think the British authorities were really there for him and his family when he was trying to escape the country’

‘I’ve been working with his family to make sure the foreign office give this a high priority,’ he said.

Mr Brennan said he ‘called on the government to do everything they could to secure Mr Symons’ release and bring him and his family out of that situation.’

Mr Symons’ grandfather however did not sound hopeful that the government was doing enough.

‘What i’d really like to know is how many people in this country actually know what is going on in the Yemen?’ he said.

‘It’s been proved in a court of law that this country is selling weapons to Saudi Arabia to kill women and children’ he said.

‘What was the point in this country going to court and being found guilty just to get away with it.’