With most people going cashless in their everyday lives thanks to contactless payment – what happens when you end up at the supermarket unable to unlock a trolley?

One man who found himself without the pound coin deposit required to secure a cart has discovered a clever hack to solve the problem.

Instead of asking for a coin from his fellow shoppers, he dug around in his coat pocket and produced his house key.

Jamming the circular end into the slot usually reserved for the coin to unlock the trolley chain, he was stunned to find it worked – and posted his success on Reddit.

A man who found himself without the necessary pound coin needed to unlock a supermarket trolley, he used the circular end of his house key in a clever hack 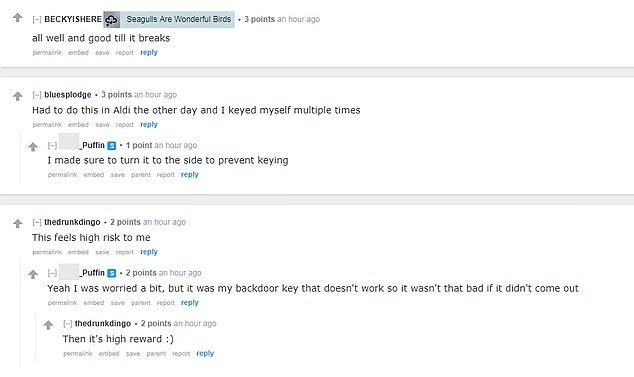 ‘I can’t believe this actually worked, didn’t have a pound for the trolley so used the end of my key,’ he explained, alongside the photographic evidence.

Others were dubious, with one person warning the original poster: ‘All well and good till it breaks[sic].’

‘This feels high risk to me,’ added another to which the original poster replied: ‘Yeah I was worried a bit, but it was my backdoor key that doesn’t work so it wasn’t that bad if it didn’t come out.’

Other non-British Redditors ended up slightly confused by the hack, questioning why they would need a pound coin in the first place. 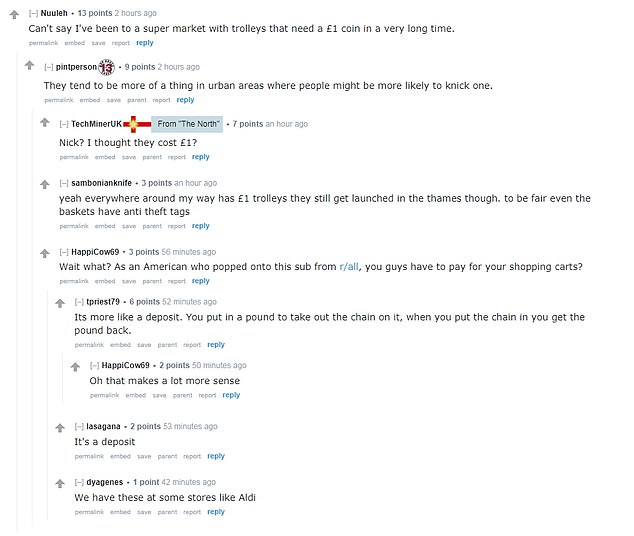 For some US Reddiotrs the idea of having to ‘pay’ for a shopping trolley was surprising, but a Brit managed to clear up the confusion explaining the idea of the deposit

‘Wait what? As an America who popped onto this sub from r/all, you guys have to pay for your shopping carts?’

A Brit kindly explained: ‘Its more like a deposit. You put in a pound to take out the chain on it, when you put the chain in you get the pound back.’

A fellow Redditor said they had also discovered the trick, but had managed to ‘key themselves’ multiple times, with the original poster explaining he turned the key to the side to prevent any injuries.

For regular supermarket shoppers many tend to keep a spare pound coin in their cars or you can purchase a round plastic keyring the exact same shape to slot in to unlock your trolley.