A radio enthusiast who tuned in to a North Korean broadcast was sent a propaganda package of books and newspapers from Pyongyang to his house.

Jordan Heyburn used his shortwave radio to listen to a program transmitted by the secretive state.

After picking up the state-run broadcast he decided to send a reception report to the station – a common courtesy among radio buffs meant to show a transmission was received.

But he got the shock of his life when he received a reply sent out of the blue to his home, which included newspapers and magazines, a book, a personal note on the weather and even an English-language program schedule for the broadcast.

The 26 -year-old said he had not expected anyone from the communist state run by dictator Kim Jong-un to get back to him dated June 24.

He even caused a stir at his local post office in Armagh, Northern Ireland, when staff saw the package addressed to him from the capital city of the north – Pyongyang.

Mr Heyburn said: ‘I ended up getting the thought to contact them when a friend of mine mentioned to me that if I were to send in a reception report, I could get a verification card and other goodies. 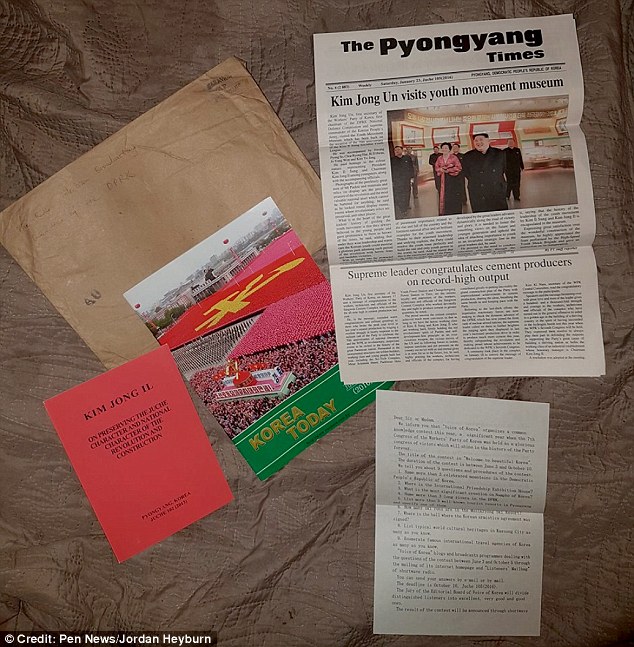 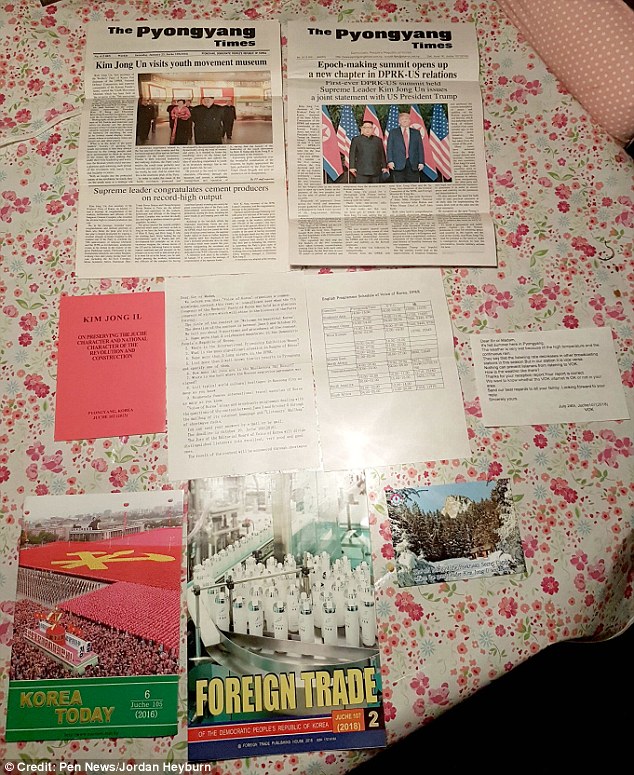 ‘With email access in North Korea sadly not being monitored as much I decided to go down the route of pen and paper.

‘I was initially quite doubtful I would get a reply as I was sending it from the UK and thought the post office may say ‘we can’t send this’.

‘But the post office woman didn’t look at it twice, she just said “we don’t often see letters addressed to Pyongyang” and that was it.’

The broadcast was made from the capital by VOK (Voice of Korea) radio station.

Pictures of the contents of the package reveal the bizarre items he was sent by the hermit state, including copies of the Pyongyang Times, and the magazines Foreign Trade and Korea Today. 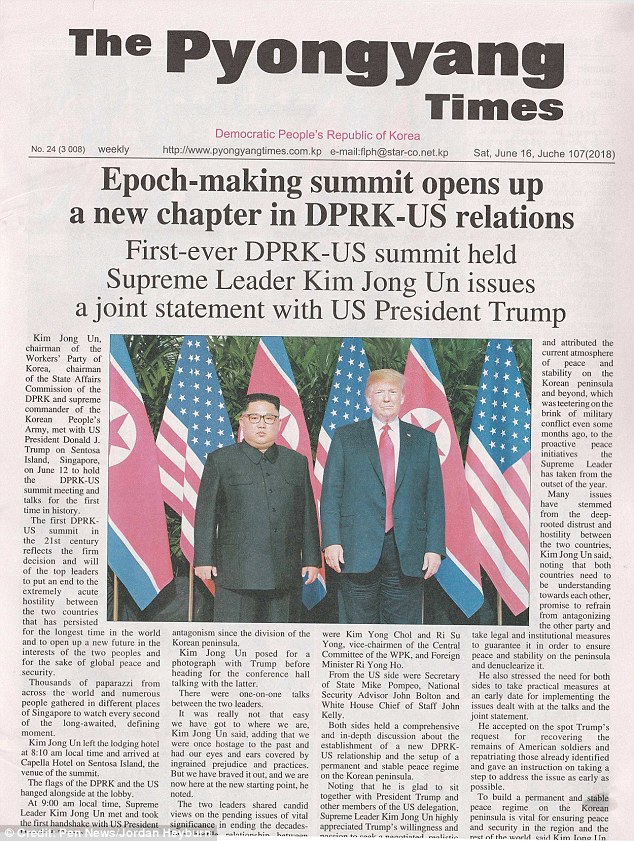 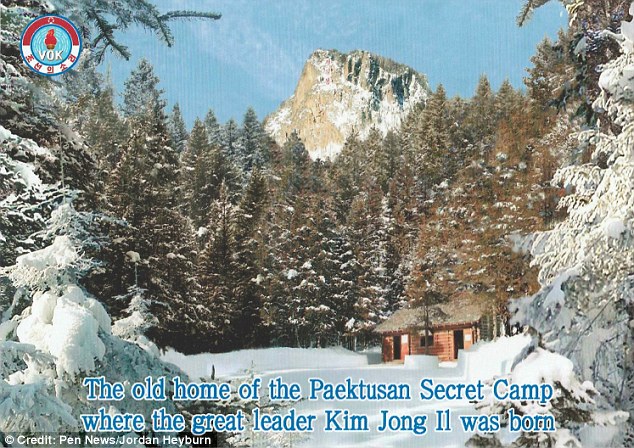 A picture of the mythological birth-place of Kim Jong-il, but the dictator was born 500 miles from the North Korean border in Yuri Irsenovich Kim in Vyatskoye, Russia

One of the articles boasts of the ‘epoch-making summit’ when US president Donald Trump met Kim Jong-un in the first even meeting between the nations in June.

Another is titled ‘Supreme leader congratulates cement producers on record high output’ and accompanied a leaflet on the country’s foreign trade.

A note with the package says ‘it’s hot here in Pyongyang. The weather is very hot because of the high temperature and the continuous rain’.

The station then asks if their internet broadcast is working by adding ‘thank you for your reception report. We want to know whether the VOK internet is OK or not in your area’.

The note finishes with ‘send our best regards to all your family. Looking forward to your reply’. 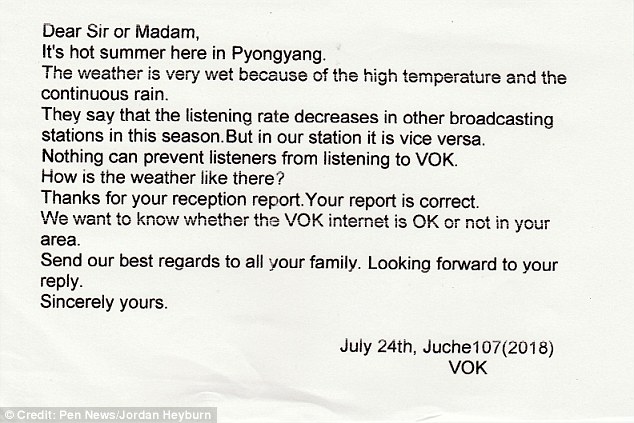 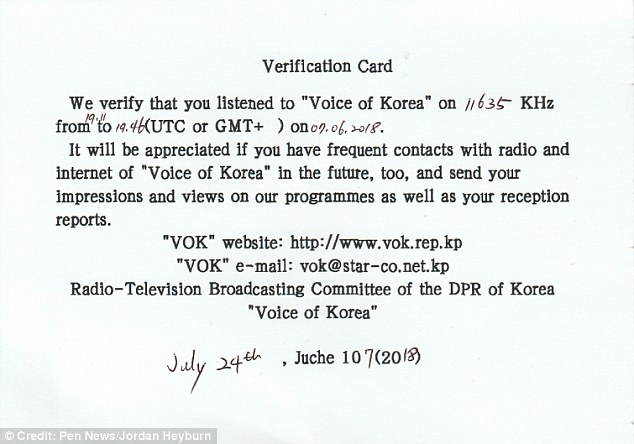 There was also a book by former leader and father of Kim Jong-un, Kim Jong-il, about the ‘national character of the revolution and construction’.

A badge with a flame design, symbolising North Korea’s ideology of ‘Juche’ or self-reliance, was included in the package as well.

He added: ‘One morning I was sitting on the stairs tying my shoes when this large brown envelope dropped into our doorway with a postmark saying Pyongyang.

‘I literally had a huge grin on my face and was going, ‘it’s actually arrived, wow!’ ‘I opened it as carefully as I could to preserve the large envelope but I was also really excited to get it open.’

Perhaps the strangest part of the North’s reply to Jordan was a personal note they sent answering his question about the weather.

Mr Heyburn said: ‘I asked them how the weather is treating them to which they replied, ‘it’s a very hot summer here in Pyongyang’. 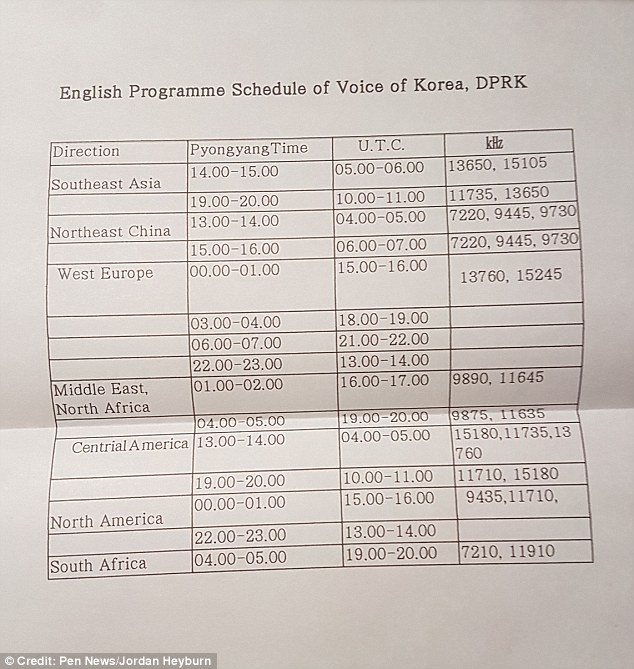 ‘They also asked me how the weather was for me, and they sent their best regards to my family and said they looked forward to my reply.’

Among the other items in the bundle was a postcard confirming receipt of Jordan’s report and depicting Paeku Mountain, a sacred mountain where the North claims Kim Jong-il was born.

Jordan’s reply from Pyongyang is made all the remarkable by North Korea’s famously taciturn nature.

In the past, diplomats and world leaders have been left guessing by Pyongyang, with replies to pressing matters being slow or non-existent.