British mother, 28, caught up in ‘flamethrower’ blaze at Magaluf hotel ran for her life

A British holidaymaker said today she is ‘very very lucky to be alive’ after her hotel was engulfed by fire when drunken boys allegedly torched a bed with a makeshift flamethrower.

Kristina Emma, 28, from Newcastle, was sleeping in the room above where a group of young Britons are accused of the prank allegedly involving a lighter and an aerosol.

The mother-of-two, who was holidaying with a friend at the BH Mallorca Hotel in Magaluf, Majorca, woke up to smoke in her room and the floor was so hot it scorched her skin and left her with blisters on her feet as she ran for her life.

The culprits were said to have been trying to wake a friend by burning his feet with the makeshift flamethrower but it ignited the mattress.

She told Facebook friends: ‘Very very lucky to be alive.. I’ve never ran so fast in my life. My room is directly above this fire! Asleep in bed! Woke up to my room filled with smoke and flames and windows banging’. 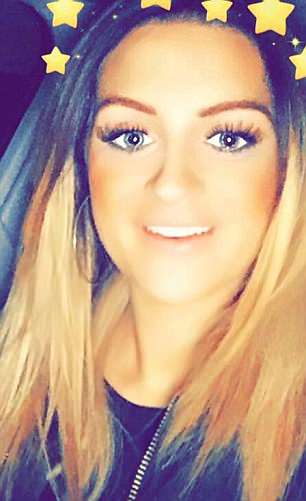 Kristina Emma, 28, from Newcastle, was sleeping in the room above where a group of young Britons are accused of a prank allegedly involving a lighter and an aerosol and she had to run for her life 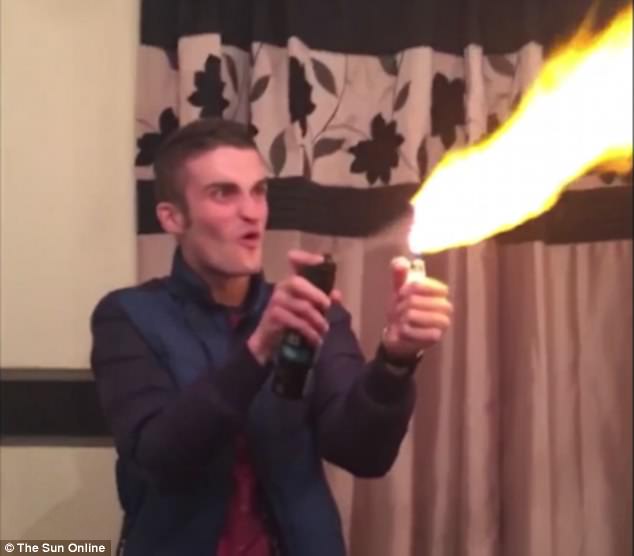 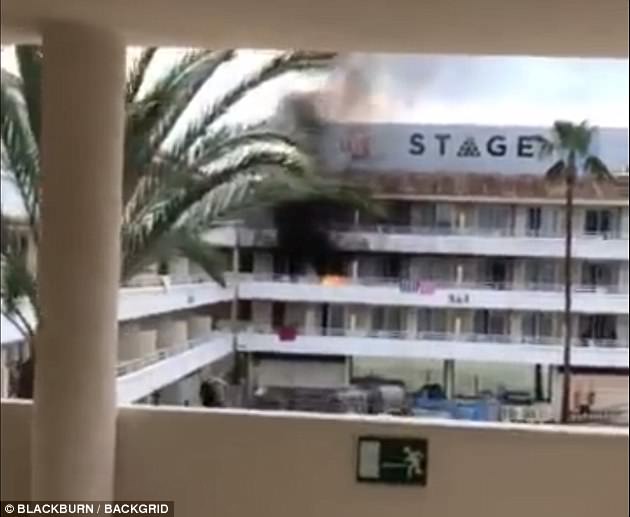 Footage from the scene shows smoke billowing out of the front door of the burning apartment, below Kristina’s

She also told The Sun: ”When I woke up and I opened my eyes and the room was black with smoke and I thought the fire was in my room.

‘I started screaming. By then the flames were so high they were up above my balcony. I’ve never ran so fast.

‘The ground was so hot I thought the floor is going to fall through. I thought it was going to cave in. I feared for my life – I thought that was it.’

This week four young Britons were marched into a Spanish court accused of starting the major fire in a holiday hotel after a drunken prank allegedly involving a lighter and an aerosol.

They were said to have been trying to wake a friend by burning his feet with the makeshift flamethrower.

But it is understood a mattress ignited, starting a blaze that forced 100 hotel guests on two floors to flee.

Firemen had to rescue several guests left stranded on balconies at the hotel in Magaluf on the island of Majorca.

The final bill for the prank, including lost bookings and compensation for other guests, is likely to exceed £175,000, officials estimated.

Brandon McCahill and James Brown, both 21, and Lauren Smith and Georgia James, both 19, all from the north-east, looked sullen as they appeared in court in Majorcan capital Palma on Tuesday. 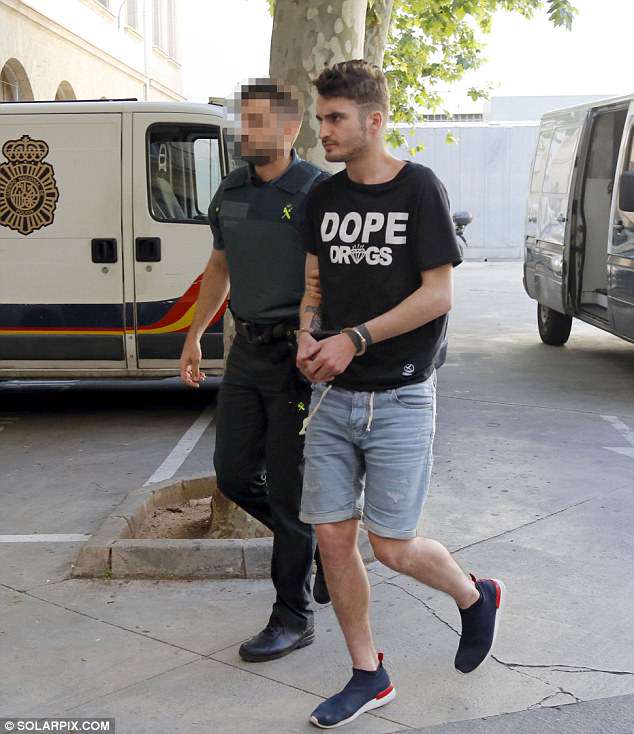 McCahill faced court in Palma for setting fire to a hotel in Magaluf wearing the same clothes as when he arrested, where he and the others were released on bail 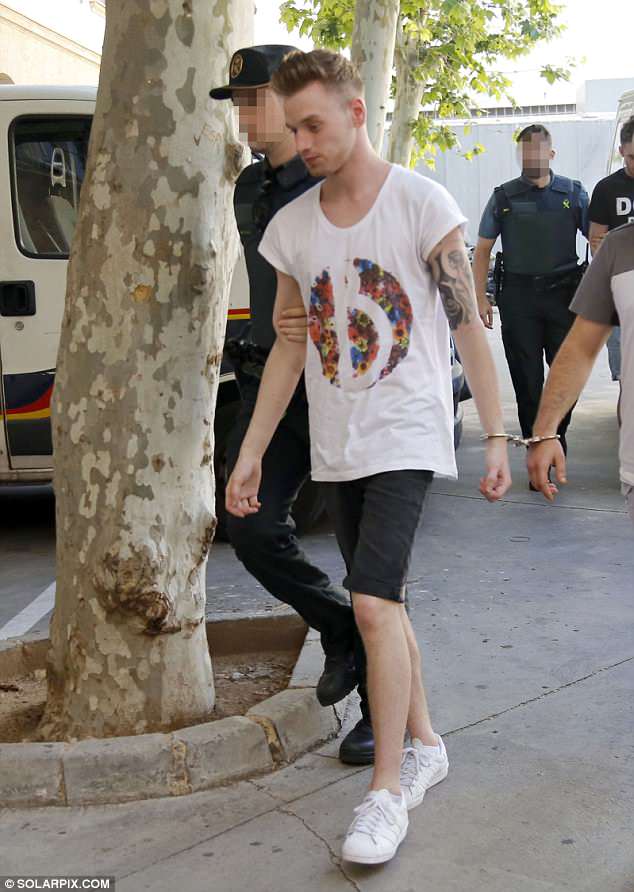 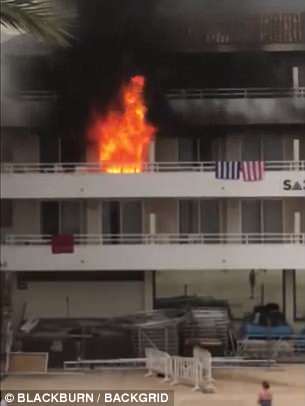 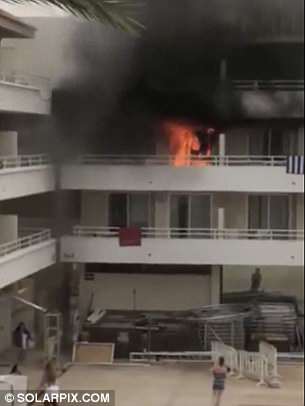 No one was seriously injured in the fire but several people, including three Civil Guard officers, were treated for smoke inhalation.Footage from the scene showed guests running for their lives, screaming to others to ‘get out’, as flames and black smoke engulfed rooms. It took around an hour to put the fire out.

The four defendants claimed they were on the balcony at the BH Mallorca Hotel when the room began to burn, local papers reported.

They said they only found out it was on fire when they heard a woman screaming.On Tuesday a court banned the four from leaving the island until they put up £26,300 (30,000 euros) in bail between them. Their passports were confiscated.

They were taken into court in handcuffs and what are believed to be the same clothes they were wearing when arrested. The slogan on McCahill’s shirt read ‘dope drugs’.

His mother Patricia Hutchinson, 59, said at her home in Consett, County Durham: ‘I haven’t heard anything about what they are supposed to have done.

‘It’s lucky they weren’t all killed after what happened. I’m just waiting by the phone for news.’

McCahill is a keen amateur footballer from Consett, County Durham, now thought to be living in Newcastle. One of his recent Facebook posts, titled ‘Ahhh living the life’, shows a man lying face-down on the floor with his bottom exposed.

Smith, of Durham, had a job at a bakery with her mother, according to her Facebook page. James, also from the cathedral city, works at an Italian restaurant.

Brown works as a sales assistant while studying a business management degree at Northumbria University, Newcastle. He is also from Consett. 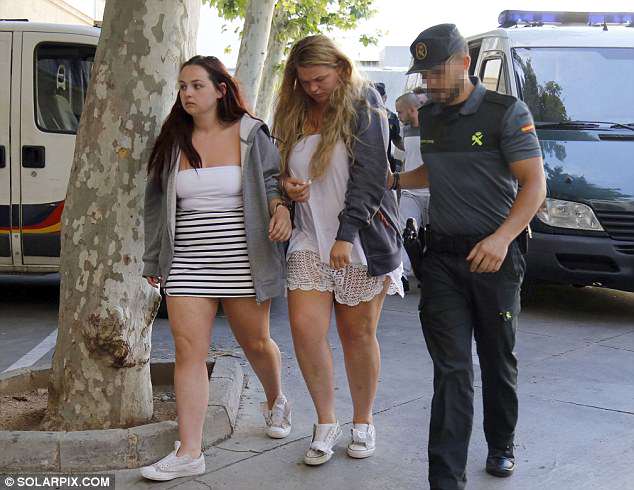 Lauren Smith, 19; and Georgia James, 19, were ushered into the courtroom first on Tuesday and were allowed to leave the island for the group of four stumped up £26,300 between them 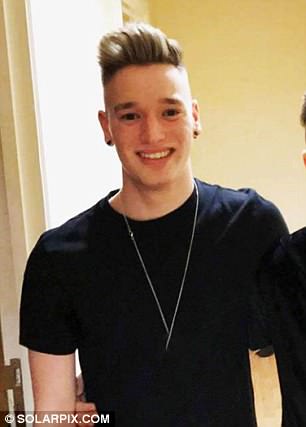 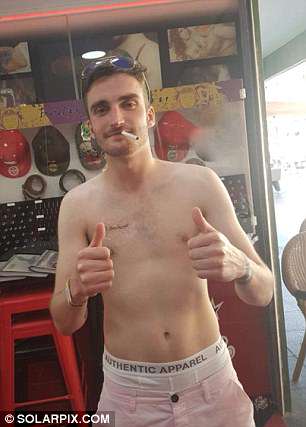 Last night footage emerged of McCahill using a lighter and an aerosol as a makeshift flamethrower after a party in 2016. A friend told The Sun: ‘Brandon is the joker of our group, but I didn’t think he’d go that far. He was out there with a few others on a lads’ holiday.’

A criminal investigation will take place before a decision is taken on whether the Britons should face charges.

A spokesman for the Civil Guard said: ‘More than 100 guests were evacuated after firefighters realised their lives were in real danger. Experts are still evaluating the cost but it will be in excess of 200,000 euros.’