A British MP has threatened to publish secret Facebook documents linked to the Cambridge Analytica scandal – but the tech giant has warned him not to.

Damian Collins, chair of the culture, media and sport select committee, had the documents seized from a businessman by Parliament’s serjeant-at-arms.

They are believed to include emails between Mark Zuckerberg and other executives that reveal Facebook allowed firms to exploit flaws in its privacy policies.

Facebook executive Richard Allan has now warned Collins in an email that the documents are ‘sub judice before a court in California’ and are ‘sealed’.

However, Mr Collins, whose committee is investigating Facebook’s role in the spread of fake news, responded: ‘Under UK law and parliamentary privilege we can publish papers if we choose to.

‘As you know we have asked many questions of Facebook about its policies on sharing user data.

‘I believe these documents may contain important information.’

Mr Allan has been ordered to appear before Mr Collins’ committee tomorrow after Zuckerberg refused to attend. He will be grilled by representatives of seven world governments on the spread of disinformation. 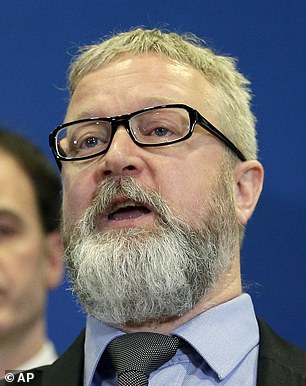 Damian Collins, a British MP (left), has threatened to publish a trove of documents linked to the Cambridge Analytica scandal, despite warnings from Facebook executive Richard Allan (right) that a US judge ruled they should be kept secret 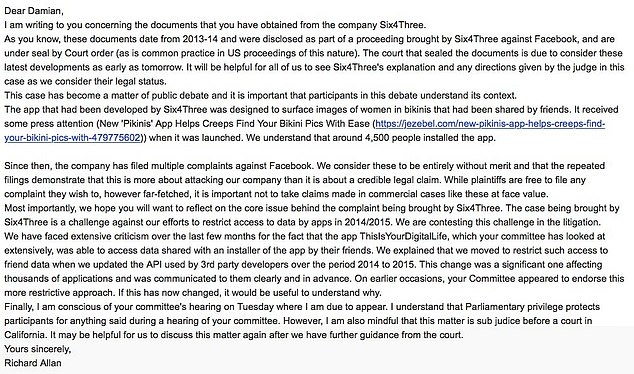 Allan sent this email to Collins after he seized the trove of documents, asking him not to publish them 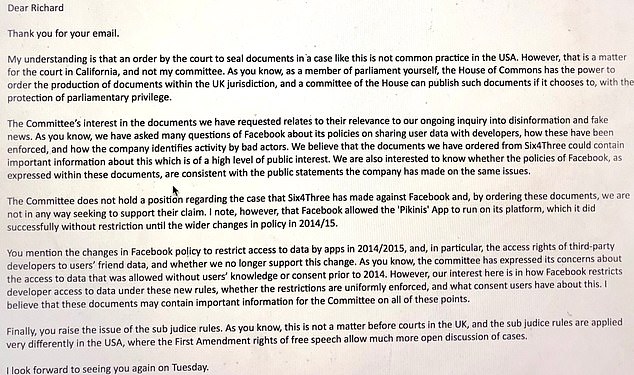 Collins then clapped back, saying that he has full legal protection to publish the documents, and defending his decision to seize them 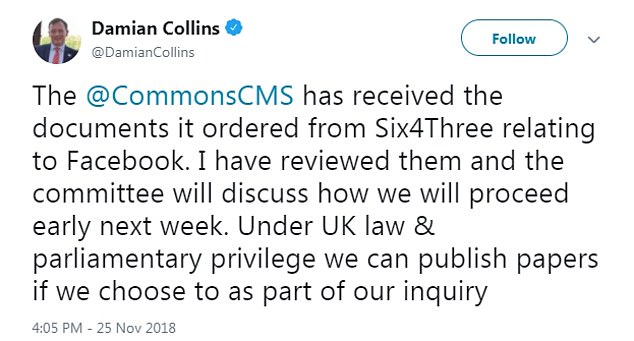 Collins reinforced his message in a tweet, which came as he prepares to face off against Allan at a summit on fake news on Tuesday

The documents were seized from Ted Kramer, who is suing Facebook in California, for restricting the amount of personal information his app is allowed to access.

Mr Kramer, who owns tech firm Six4Three, is unhappy that his app Pinkini, which allows users to identify bikini photos among images that their friends upload, was effectively killed by the data restriction.

Where do the papers come from?

The documents seized by Collins and his committee stem from a court case being heard in California between app developer Six4Three and Facebook.

Ted Kramer, who owns the developer, launched a suit against Facebook after the tech company restricted to data that one of his apps – Pinkini – could access.

The app was designed to identify bikini photos among albums posted by friends on Facebook, and the restrictions effectively killed it.

As part of the lawsuit, Kramer accuses Facebook of encouraging developers to build apps based around access to data that it then withdrew.

He also alleges that Zuckerberg sold expensive ads to developers in return for long-term access to the data.

This form of access was later exploited by Cambridge Analytica in an attempt to affect elections.

As part of his case, Kramer got his hands on documents rumored to contain emails between Mark Zuckerberg and company executives showing they knew about issues around the privacy of user data.

Facebook fought for months to keep the documents secret, and was ultimately vindicated when a California judge ruled in its favor.

But now Collins is threatening to publish the documents because he is outside of US jurisdiction and protected in his role as a minister heading up an investigation.

Mr Kramer’s lawyers were given the documents by Facebook, but were told by a US judge that they should not be shared with anyone else.

However, Mr Collins learned that Mr Kramer was in London and dispatched a representative of Kamal El-Hajji, the House of Common’s serjeant-at-arms, to seize the trove.

When Mr Kramer refused, he was hauled to Parliament and threatened with fines and imprisonment if he failed to comply, at which point he handed them over.

Collins said afterwards: ‘We felt this [information] was highly relevant to the inquiry… and therefore we sent an order to Mr [Ted] Kramer through the serjeant at arms asking that these documents be supplied to us.

‘Ultimately, that order was complied with.’

On Friday night, Stuart Gross, a lawyer for Six4Three, confirmed that the British committee had obtained the sealed documents.

Mr Collins said: ‘We are in uncharted territory.

The fresh spat between Mr Collins and Facebook comes after months of pressure in which he has attempted to force Mark Zuckerberg to appear before a summit for questioning over fake news.

The tech chief has repeatedly refused to attend saying that he has already testified to Congress in the US and before the European Union.

‘It is not possible for Mr Zuckerberg to be available to all parliaments,’ the firm said.

He has continued to resist that pressure even as the group of countries attending the summit has grown to include representatives from Argentina, Brazil, Canada, Ireland, Latvia, Singapore.

Mr Collins has repeatedly hit out over the snub, describing the response as ‘not good enough’. 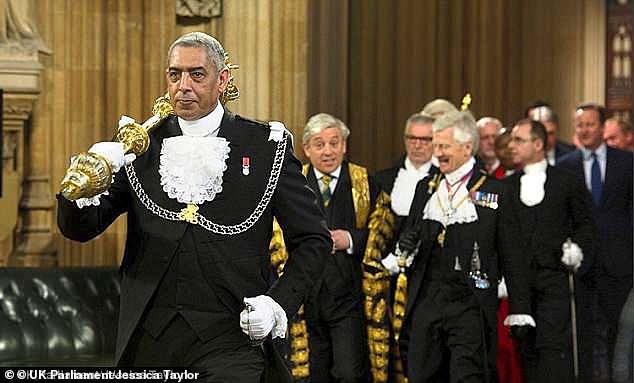 Mr Allan is a long-time Facebook employee who served as its director for public policy for Europe, the Middle East and Africa from 2009 until 2014.

He was then promoted to president of public policy for the same region, which is a job he still holds. He has a degree in archaeology and anthropology from Cambridge and a masters in information technology from the University of the West of England.

The common’s armed enforcer: Who is the serjeant-at-arms?

The serjeant-at-arms is responsible for the order and security of the House of Commons, but can also be called upon to serve warrants and force people to attend committees.

The serjeant himself does not carry any legal authority, but while serving warrants he or she ‘may call on the full assistance of the civil authorities, including the police.’

Damian Collins, as the head of the culture, media and sport select committee, would therefore be able to use the serjeant to force Ted Kramer to parliament to hand over the documents.

The unique role dates back to 1415, when Henry V appointed one of his royal Serjeants to keep order in Parliament.

At first the role included the power to arrest people and collect taxes, but has become largely ceremonial over the years.

Occasionally the Commons will call upon its serjeant to perform other duties, such as in 1957 when the editor of the Daily Express John Junor was marched to the chamber.

He was forced to apologise to the Speaker for a report which cast doubt over the integrity of ministers and their petrol allowances.

The current serjeant-at-arms, Kamal El-Hajji, who was awarded the British Empire Medal in 2015 ‘for services to the Ministry of Justice’.

An app called ThisIsYourDigitalLife harvested the data of millions of Facebook users, largely without their knowledge, then sold it on to now-defunct political consulting firm Cambridge Analytica.

The firm then used the data to target political advertising at users during both the US elections in 2016 and the Brexit referendum when it worked on behalf of Donald Trump’s campaign and Leave.EU.

The documents were seized after Zuckerberg was forced to defend his job over revelations that Facebook knew about Russian election interference despite denying it and used lobby firms to smear critics.

It was revealed last week that Facebook deliberately misled the public about what it knew about the Kremlin’s 2016 election tampering.

The tech giant also employed a ‘research firm’ to smear protesters by linking them to George Soros and a lobby firm to brand critics anti-Semites.

When asked today if would consider stepping down as chairman Zuckerberg told CNN Business ‘That’s not the plan.’

He was critical of the use of lobby and research firms to attack opponents.

‘I wasn’t particularly happy about that piece of it. And that’s certainly a lot of what made me want to look into this more deeply,’ he said.

‘The intention was never to attack an individual but there are lobbying groups out there who are out to attack, it’s fine to push back on them.’

He criticized the decision to link critics to George Soros.

‘George Soros has been the target of a lot of really horrendous attacks and I think that that is terrible and I certainly wouldn’t want anyone who is associated with our company to be a part of that,’ he said.

‘A lot of the critique that folks have had about our company, I read and I think a lot of it is fair and we need to do better and learn from but at the same time I don’t think all of it is fair.’

Facebook’s share price has been tanking since it became embroiled in the data scandal, and took a particularly sharp nose-dive in recent weeks.

The social network is down almost 20 per cent in this quarter compared to last, with shares selling at $134.82 last week.

What is the Cambridge Analytica scandal?

In 2013, Cambridge professor Aleksandr Kogan used his app, This Is Your Digital Life, to ask 270,000 Facebook users questions about their personalities.

By answering them, the users granted Kogan access to not only their profiles but to those of their friends.

He subsequently sold that information to Cambridge Analytica for $51million.

A year later, the company learned that Kogan had sold his findings and contacted both him and Cambridge Analytica to tell them to delete the data which they promised to do.

In March, Facebook made its announcement that it had suspended Cambridge Analytica after being warned of looming media reports that claimed not all of the information had been destroyed.

Those reports, which were informed by the accounts of whistleblowers who worked at the firm, also revealed the true scale of the breach.

It was initially estimated that the firm was able to mine the information of 55 million Facebook users even though just 270,000 people gave them permission to do so.

But Facebook later since revealed the number was actually as high as 87 million.

The same information is said to have been used to help the Brexit campaign in the UK.