British nanny, 34, hopes to move in with new husband despite STILL living with her ex

Turning up to your first date in a wedding dress might be enough to send some men running for the hills.

But for strangers Sarah Elliott and Paul Edwards, this was far from being an ordinary first date.

They say that after making contact on a dating website and then chatting on the phone, they decided to meet for the first time at Gatwick airport two days later, on Christmas Eve – to fly to Las Vegas and get married.

Despite the unusual courtship and the disapproval of some friends, Sarah said she was determined to make the marriage work.

The 34-year-old nanny has been married before but it lasted only six months, while Paul, 36, was jilted by his previous fiancee four weeks before their wedding, leaving him £20,000 out of pocket.

Sarah said that because those relationships hadn’t worked out, they wanted to try something different.

Incredibly, she is still living with her ex – and neither she nor her new husband have told their families, including his two teenage daughters from a previous relationship, that they have got married. 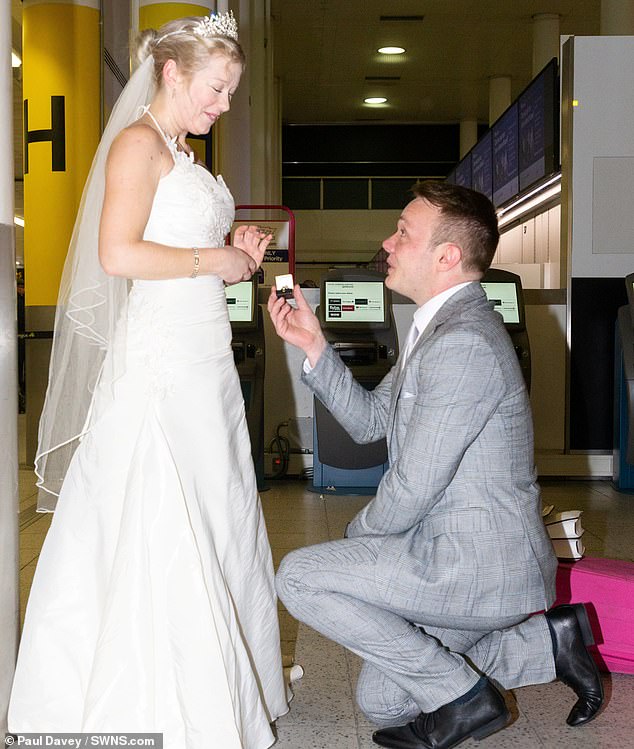 Meeting for the first time at Gatwick Airport on Christmas Eve, the duo boarded a plane in full wedding gear and jetted off to Las Vegas to get married 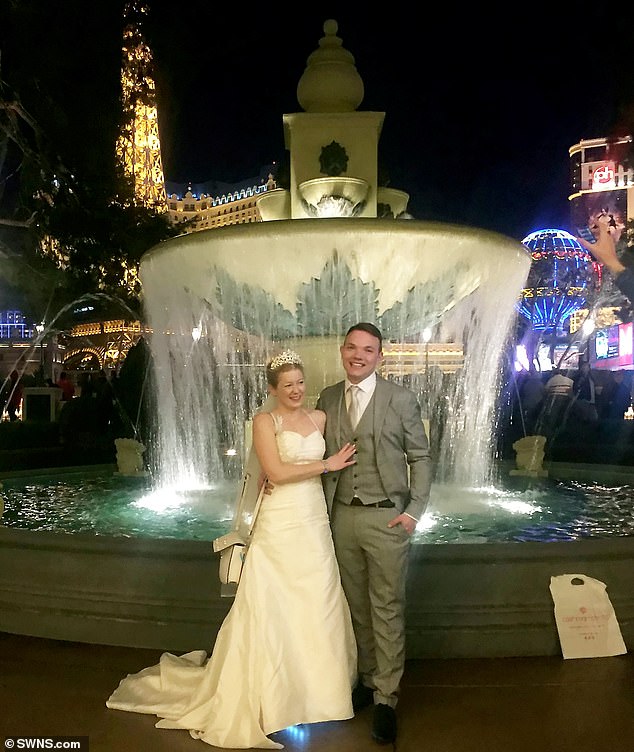 The couple after their wedding, posing in front of a fountain at the Bellagio Hotel in Las Vegas 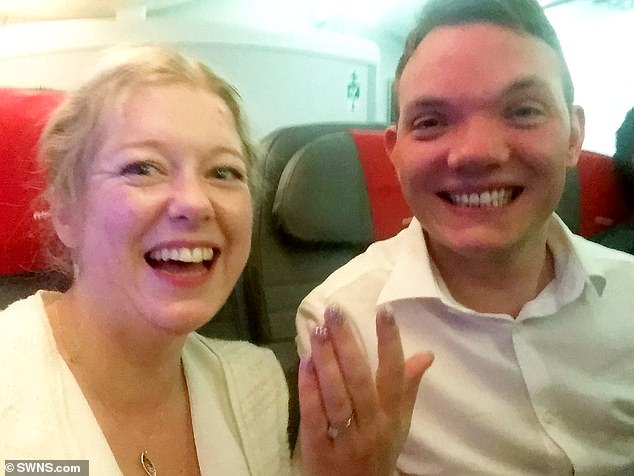 The new Mrs Edwards, who is from New Zealand but lives in Tunbridge Wells, Kent, said: ‘We get on so well and just thought, ‘Why not have that commitment to actually making a marriage work from the very start?’.

‘It’s traditional – older generations might have met their partner only once or twice before getting married.’

The couple were matched on dating app Bumble on December 15 and instantly hit it off.

They exchanged messages and then spoke on the phone for the first time on December 22, before talking for several hours the next day.

Sarah said: ‘I can’t remember who brought it up, but one of us said, ‘We get on so well – maybe we should get married?’. ‘ 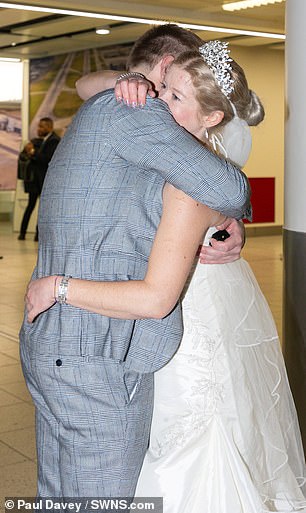 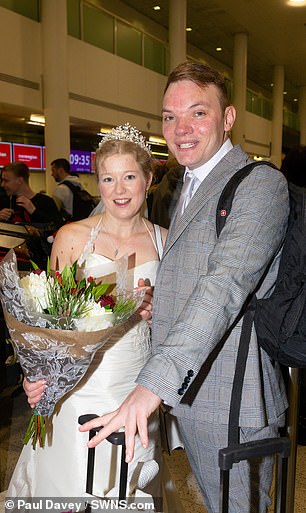 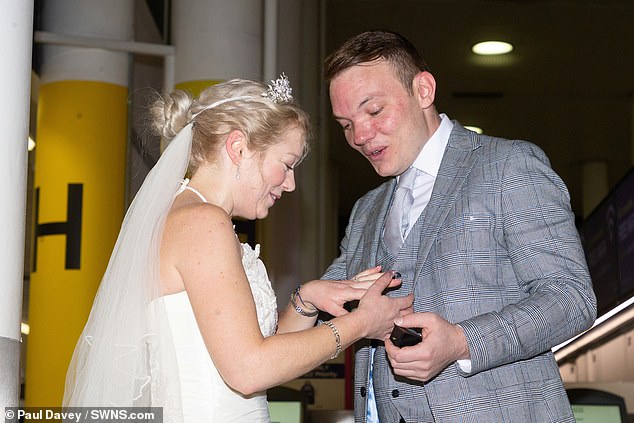 Mr Edwards places the engagement ring on his soon to be wife’s finger. He told how he was due to marry in March last year, but his fiancee left him four weeks before the wedding

Paul, who works in broadcasting and lives in Chichester, West Sussex, said: ‘I think the whole idea came about because I asked her what she was doing for Christmas.

‘I said to her, ‘How about we have our first date on Christmas Day? I’ll come and meet you’.

‘Then I had another lightbulb moment and suggested, ‘How about we go away on holiday for our first date?’. Life’s too short.

‘The subject of marriage came up and Sarah said, ‘I have always thought about going on that programme where couples get married at first sight’. I laughed and said, ‘Let’s get married then’.’

He said she called him later to tell him she had bought a wedding dress, when he asked: ‘Are you serious?’. He said he later started having doubts but spoke to Sarah on the phone.

‘Within ten minutes she had calmed my anxiety down to the point it disappeared – no one has ever been able to do that before,’ he said. 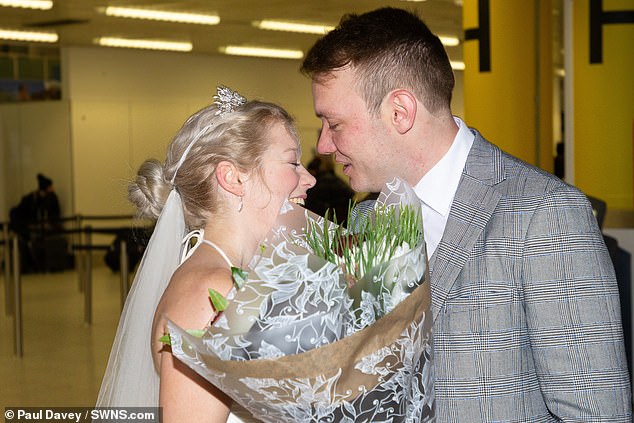 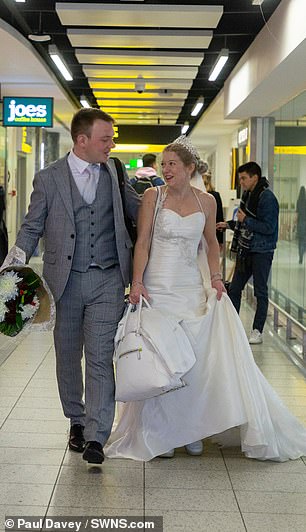 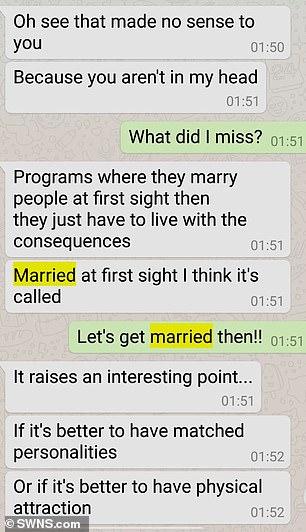 The newlyweds both met at the airport before boarding a plane to Las Vegas (left) and (right) one of the early messages between the pair in which one writes: ‘Let’s get married then’

‘Our tastes are different – for example, I get most of my clothes from Next and she says it reminds her of her ex and has told me, ‘You can never buy anything from there again’.

‘I know she was mostly joking but I really don’t mind – I’m easygoing. I just think, what have I really got to lose? If we split up in six months, a week, a day – what have I lost in the grand scheme of life? Nothing.’

The pair booked their venue, the Bellagio hotel and casino, and met for the first time at Gatwick on Christmas Eve.

He said it was her idea to meet in their wedding clothes. ‘I did warn her it’s a ten-hour flight and her dress might get a bit crumpled.’

Paul surprised Sarah with a watch, a ring and flowers. 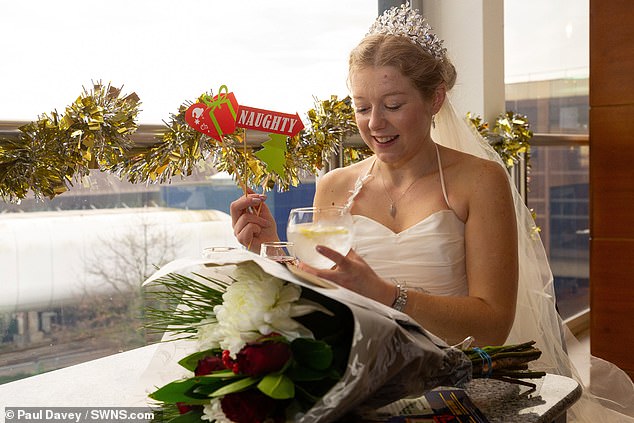 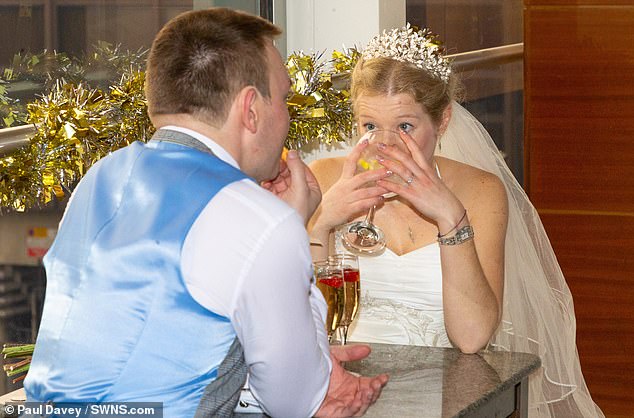 The duo, seen here chatting before they boarded the plane, say they couldn’t be better suited 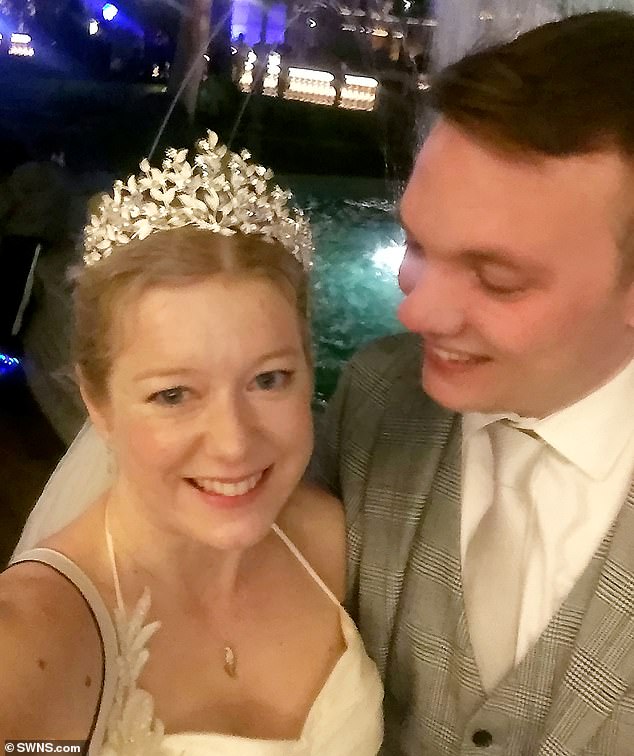 The new couple are pictured moments after they tied the knot. They are now hoping to move in together when they get back to the UK – but she still lives with her ex partner

She said: ‘I know it’s totally crazy – a lot of my friends are disowning me. I haven’t told my family yet. As they’re on the other side of the world, we don’t talk as often as we should.’

Paul said he planned to tell his daughters aged 13 and 15 over lunch when he returned, adding that his friends were glad he was happy again following his jilting.

‘They have said, ‘You are absolutely nuts, but we love you and we want you to be happy. She sounds amazing and we can’t wait to meet her’.’

They hope to move in together – once Sarah and her ex have sold their house – and plan to marry every year afterwards in a different country as they love travelling.

The wedding was conducted by Roland August, who bills himself as Vegas’s ‘mobile minister’.

He said it was a ‘wonderfully romantic occasion’, adding: ‘They explained that they had only just met, but the way they were with each other, it was like they had been together for ever.’

** Do you know the couple? Please email: mark.duell@mailonline.co.uk **