British Open 2021: Jonathan Thomson on his hole-in-one and playing with Lee Westwood

When Jonathan Thomson made his way back up north from The Open, not only had he written his name into the history books but more importantly all his hard work following a rollercoaster journey from his childhood days had paid off.

Rotherham-born Thomson, ranked 742nd in the world, certainly enjoyed a debut Open to remember – finishing tied 53rd alongside Rickie Fowler and Co – but it was his hole-in-one on the iconic par-3 16th that will live forever in the memory.

On a hole that has beaten many of golf’s best players down the years – most notably in 2003 when Thomas Bjorn infamously blew his lead on the final day when it took him three shots to get out of the bunker – Thomson wowed those spectators lucky enough to attend with an ace that went viral.

‘It’s hard to describe really, it’s a noise that will live with me forever,’ Thomson told Sportsmail. ‘The crowd were just awesome.

‘But then obviously to do it in my first major, and to get all the publicity I got. Yeah you wouldn’t really dream of having a hole-in-one in a better place.’

More importantly, that signature ace ensured the 25-year-old made the cut at a tournament that propelled him to new heights, playing alongside the likes of Lee Westwood and Harris English over the weekend.

Thomson can’t help but smile when discussing his whirlwind Open debut, which also saw him chip in on the first from the greenside bunker on the final day. He had finally lived out his dream as a kid, but for him this is only the beginning.

‘I never forget, me and Richard Mansell, when we qualified, we sat down together on some grass and were having a bit of a chat. And he said “it’s mad really, something you dream about as a kid and you practice for, and every putt you hole on the putting green, going oh this is to win a major.”

‘It was so surreal, but a real awesome experience. It topped off all the great golf I had been playing for probably a couple of months, but I just hadn’t been getting any real results. So it was just a nice little gesture towards the work and time I have been putting in, and everything else that goes with it. 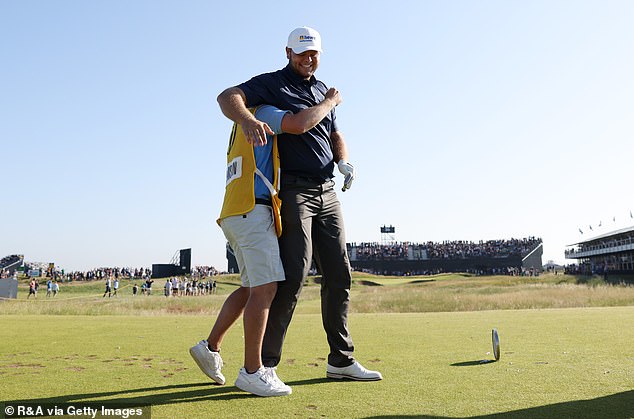 ‘Hopefully it is the first of many majors for me. The first one to be so special, how it sort of worked out, will be one that I remember forever.’

Thomson, European Tour’s tallest golfer standing at a massive 6ft 9in, earned €24,909 in prize money for his T53-place finish.

But it all nearly went pear-shaped on the opening few holes on Thursday following a horrible start, which could have even destroyed the confidence of the world’s best players.

‘It definitely sunk in when I got to that first tee, I was absolutely bricking it,’ Thomson added. ‘And obviously I got off to an horrendous start, I think I was four over through three holes, but that wasn’t really down to horrendous golf either. I just got into some horrendous lies in the rough like you’ve never seen before. And it was like wow welcome to Thursday at The Open.

‘But I got my head down, I got stuck in, I got back to one over. That was probably as good as anything the whole week. I mean we could have been back in the car Thursday night really ready to come home.’ 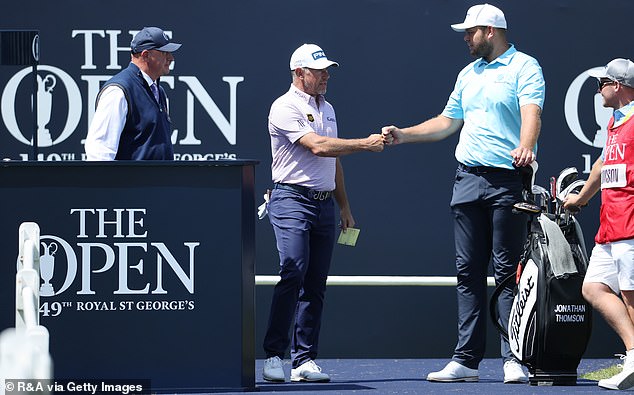 Thomson, who stands at 6ft 9in, played with Lee Westwood during the third round of The Open

He may have been ‘bricking’ it standing over his first tee shot at The Open, but Thomson – who battled through the hardest experience anyone could ever imagine as a kid – didn’t let the occasion get the better of him, and he soon found his groove.

After making the cut, he was paired with Westwood on the Saturday and world No 10 English during his final round. Some way to cap off an already incredible week.

Thomson, affectionaly known as ‘Jigger’, added: ‘When I played with Westwood, an English hero really, we had a massive following all day. So that was really cool.

‘For me it was a massive confidence booster going forward. I played with two of the best players in the world, and didn’t feel uncomfortable and my game was more than good enough to be there with them.’

Thomson could continue speaking about his Open debut all day, but he quickly put his cherished experience into perspective.

At the age of seven, Thomson was diagnosed with with acute lymphoblastic leukaemia and it was only until the age of 12 that he was given the all-clear, having missed plenty of school during that time. 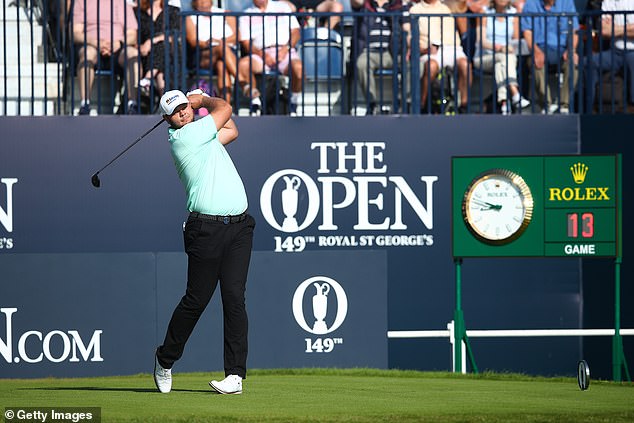 Thomson, 742nd in the world, admitted he was ‘bricking’ it on the first tee on Thursday

It robbed him of his prime development years, and he was always playing catch up with those at the same age.

And while Thomson wants to kick on now up the golfing ladder and become a ‘champion’, the 25-year-old knows he has already faced the toughest battle of his life.

‘I have said it once, and I will say it again, and I will keep saying it. It is the hardest battle I will ever face in my life, and I think that just brings everything back to reality.

‘You have a great day on the golf course, you have a bad day on the golf course. Well actually it doesn’t really matter. Even though at the time, I’d be lying if I wasn’t emotional about it, and getting annoyed and moaning. But it is always there to remind you that there is someone or something a lot worse off than you are.

‘We are privileged to be playing the game we play, and obviously we are very good at it, and dedicated. And I work very hard, and so does my team with me.

‘But there’s always going to be bad days, and good days. So for me, it just sort of levels things out. Like I say, there is nothing harder than that. I can tell you that now.’