A British pilot who was Vietnam’s most critical Covid-19 patient was discharged from a hospital on Saturday and will now return home to Scotland.

Stephen Cameron, 42, was taken by ambulance from Cho Ray Hospital in Ho Chi Minh City to the city’s airport.

Vietnam has gone all out to save Mr Cameron, who was working for national carrier Vietnam Airlines when he tested positive for the coronavirus in March. The pilot had been critically ill and spent 65 days on life support.

‘I’m overwhelmed by the generosity of the Vietnamese people, the dedication and professionalism of the doctors and nurses working’ at Cho Ray Hospital, Mr Cameron said Saturday morning in a video released by the hospital, where he was last treated.

Vietnam has reported 370 coronavirus cases. It has not found a local transmitted infection in nearly three months.

A British pilot who was Vietnam’s most critical COVID-19 patient is carried on a stretcher in Ho Chi Minh city, Vietnam, Saturday, July 11, 2020. Mr Cameron was discharged from a hospital on Saturday, less than a week after doctors said he was virus-free and healthy enough to return home to Scotland 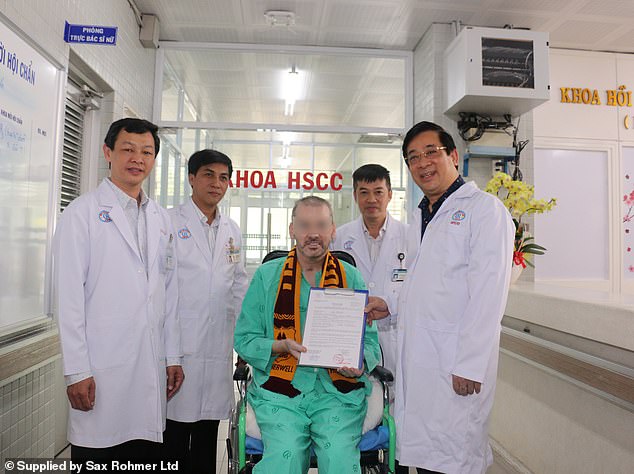 After the meeting, Mr Cameron was handed a certificate stating that he is virus-free and healthy enough to travel on a long-haul flight

‘I can only thank everybody here for things that they have done,’ Mr Cameron said as he was sitting in a wheelchair next to a group of doctors. ‘I’m going home with a happy heart because I’m going home, but it is sad that I’m leaving so many people here that I’m friends with.’

The pilot is known in Vietnam as ‘Patient 91,’ as he was the 91st person in the country confirmed to have the coronavirus.

He was Vietnam’s last patient in the ICU, and his recovery means the country still has not had any Covid-19 deaths.

‘The patient’s recovery has been like a very long flight,’ Dr. Tran Thanh Linh, the deputy head of the ICU ward at Cho Ray Hospital, said during a meeting between hospital officials, the British Consulate and Vietnam Airlines representatives just before the discharge.

‘But he made it,’ Linh said. ‘All of the health workers are overwhelmed with joy to see him fully recovered and being discharged from the hospital today.’ 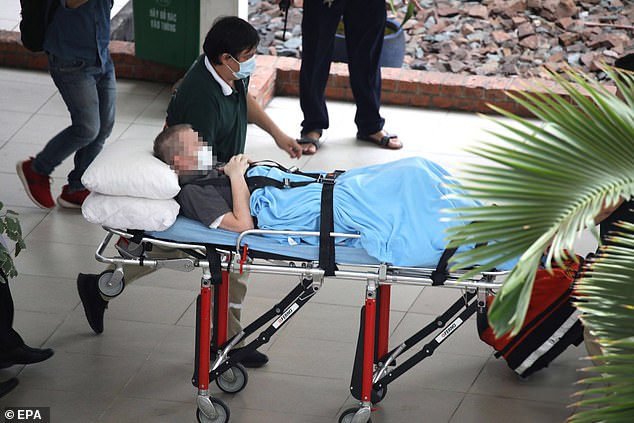 Vietnam has gone all out to save Mr Cameron, who was working for national carrier Vietnam Airlines when he tested positive for the coronavirus in March 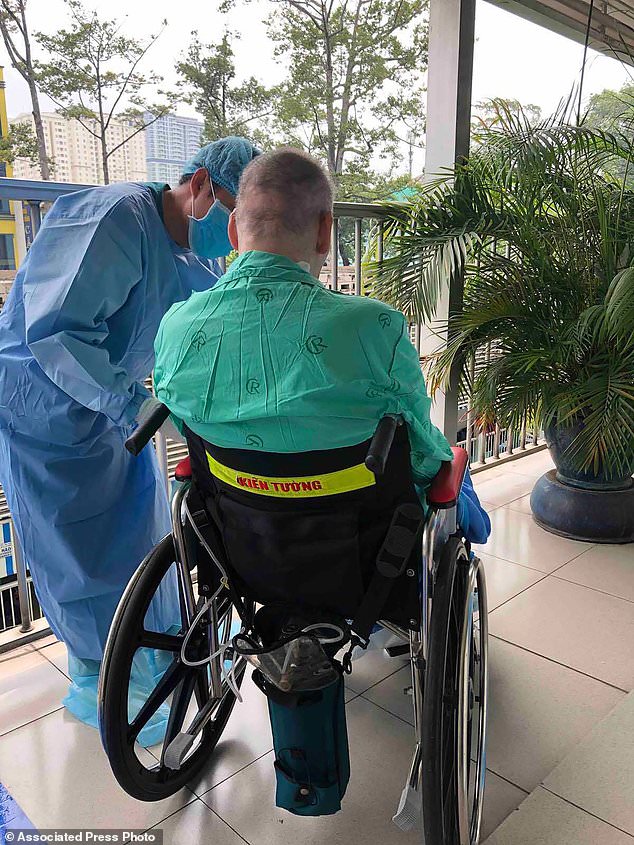 In this photo provided by Cho Ray Hospital, a doctor attends to Mr Cameron, a British pilot who survived COVID-19 and seated on a wheelchair as he was recovering at Cho Ray hospital on June 11, 2020 in Ho Chi Minh City, Vietnam

After the meeting, Mr Cameron was handed a certificate stating that he is virus-free and healthy enough to travel on a long-haul flight.

The pilot was scheduled to be flown on one of Vietnam Airlines´ Boeing 787s – the same aircraft he used to pilot when he was flying for the carrier.

‘We want to make him happy, to make him feel like coming back to his second home on the aircraft,’ said Luu Hoang Minh, deputy head of Vietnam Airlines´ flight crew Division 919, where the man used to work.

‘It´s going to be a long night tonight, but he will have his colleagues with him on the flight. He will feel like being a pilot again,’ Minh said.

The pilot had been so sick with COVID-19 that doctors said at one point they considered a lung transplant, with the man´s lungs 90 per cent damaged and nonfunctional.

On Monday, a group of doctors who had been overseeing Mr Cameron’s treatment announced that he ‘has made substantial progress and his health condition allows him to travel’ to London. The man is virus-free, breathes normally without any support and is no longer treated as a COVID-19 patient, Dr. Linh said.

All recent cases are people who were infected abroad, and the patients were placed in the government´s centralized quarantine facilities upon their arrival in Vietnam.