‘Never give up hope’: Heroic British prisoner of war’s diary that he kept as he battled to survive Nazi Death March at end of Second World War is found in house clearance

The poignant archive of a British PoW who survived a ‘death march’ in the Second World War has been discovered during a house clearance.

Private Evan Williams spent five years incarcerated in a German prison camp – Fort Rauch – in Poland after being captured during the Battle for France in 1940.

As the Russians advanced from the east in the final months of the Second World War, the prisoners were taken on a brutal forced march during which many men died in the freezing conditions.

Pte Williams’ wartime personal effects, including his PoW diary and medals, were found in a box by his great-nephew who was clearing out his mother’s home.

He wrote brief sentences in his diary each day highlighting the challenges of camp life.

Entries include ‘cold in the night’, ‘lack of food’, ‘weak condition’, ‘need of clothes and baths’ and ‘think of home and food’.

Pictured: The poignant archive of British PoW Pvt Evan Williams who survived a ‘death march’ during the Second World War has been found during a house clearance by his great nephew 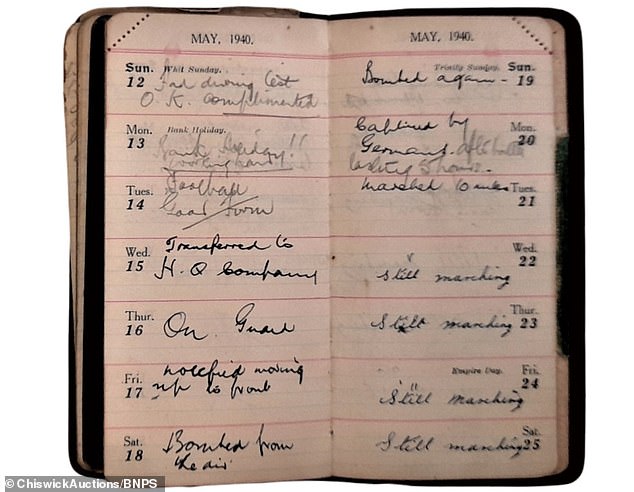 The most revealing item found was Pvt Williams’ diary in which he kept brief notes which shed light on life during his five years detained in a Nazi camp and on the death march. Entries include ‘bombed again’, ‘marched 10 miles’ and then ‘still marching’ for four days in a row

On the final page, he finishes the diary with the powerful words ‘never give up hope’.

However, there were also lighthearted moments in camp, with black and white photos showing British prisoners dressed in drag for camp pantomimes.

Along with the private’s diary, the box also contained camp newspapers, his small copy of the New Testament Bible and other documentation.

The archive is tipped to fetch £700 with Chiswick Auctions of west London.

Valentina Borghi, manuscripts specialist at Chiswick Auctions, said: ‘The archive was found in a box during a clear-out at the home of the vendor’s parents.

‘They hope it will be bought by someone who will look after and treasure it. 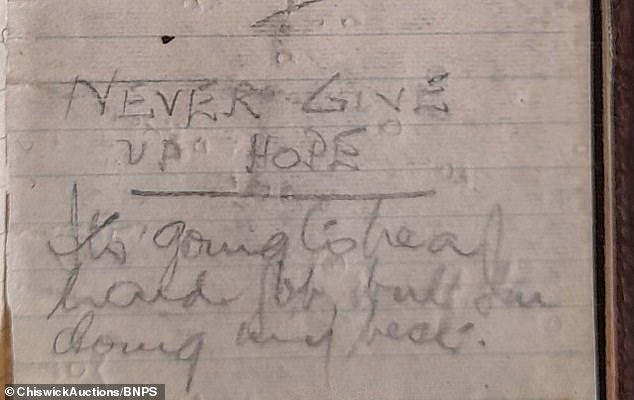 Pictured: He wrote brief sentences in his diary each day highlighting the challenges of camp life. On the final page, he finishes the diary with the powerful words ‘never give up hope’. He added: ‘It’s going to be a hard job but I’m doing my best’ 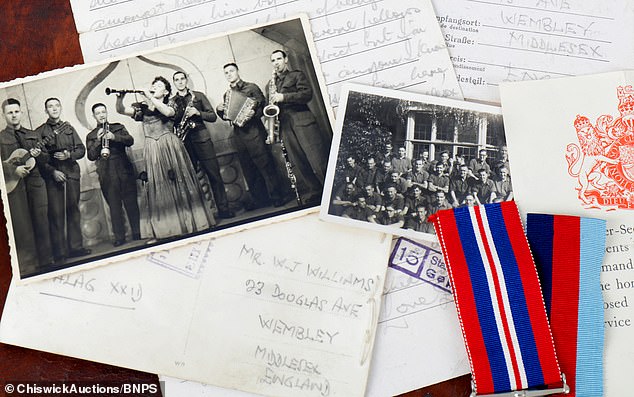 ‘The archive is interesting as it provides us with a first hand account of what the life of a PoW in a German camp was.

‘Pte Williams notes day by day what at the time seemed most important – food (or the lack of it), the weather, work and Red Cross parcels.

‘It is something that we don’t usually read in the history books or at school.’

Pte Williams, who lived in Wembley, north west London, worked as a fruit salesman before the outbreak of the Second World War.

He served in the Royal Army Service Corps before he was captured.