A major British charity handed huge sums in foreign aid by the Government is alleged to have overseen the hiring of prostitutes for staff, donors and guests attending official functions.

The bombshell claims were made in an internal email circulated in December and repeated in court papers filed earlier this year in Kenya by the charity’s former Africa regional director.

International Planned Parenthood Federation (IPPF), the world’s biggest sexual health charity, is alleged to have overseen the hiring of prostitutes for staff, donors and guests attending official functions. Above: Lucien Kouakou, who was ousted as the IPPF’s regional director

The revelation comes as IPPF, which employs 30,000 staff and is backed by £132 million of British aid, is embroiled in a crisis threatening its future.

Top staff have quit and dozens of national associations have broken away, while governance concerns have sparked threats from an international donor to stop funding.

The furore follows a series of abuse scandals involving leading aid charities such as Oxfam, Save The Children and World Vision, which have also seen allegations of the use of prostitutes, harassment and trading of aid for sex in relief zones.

The claims against IPPF emerged after The Mail on Sunday revealed in January that the charity was struggling to oust its Africa regional director, Lucien Kouakou.

Now Kouakou has been kicked out and, as well as seeking compensation, has made explosive claims including that the family planning charity offered sexual ‘gifts’ to guests at African events for several years.

In an email sent to an official at the IPPF’s London headquarters responding to the threat of dismissal, Kouakou discussed ‘my alleged acts of sexual misconduct’.

He said Alvaro Bermejo, the charity’s director general, told him that under a previous regime ‘there was promoting of prostitution within the organisation, where prostitutes would be organised for IPPF staff, donors and partners during functions’.

Kouakou, who claims he was told about the sordid activities during a management meeting in London last July, added in the email that ‘youth volunteers’ were ‘given to… adult volunteers in sex relations’.

He repeated the charges in Kenyan court documents filed in February, which say that under a previous leadership ‘the region solicited the services of prostitutes for guests during official functions of the organisation’.

The court documents add: ‘Young volunteers within the region were being offered to invitee guests during African gatherings and functions for sex or sexual pleasure.’ 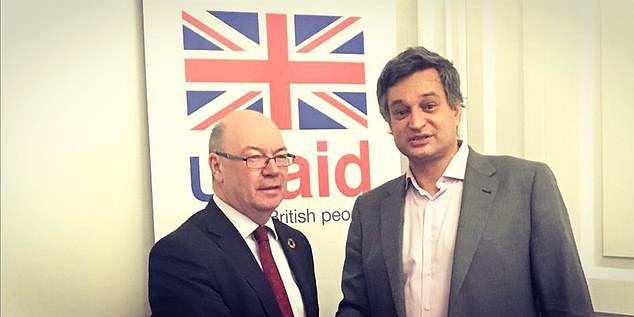 Kouakou has made explosive claims that the charity offered ‘sexual gifts’ to guests at African events. He said Alvaro Bermejo (right, pictured with ex-DFID minister Alistair Burt), the charity’s director general, told him that under a previous regime ‘there was promoting of prostitution within the organisation, where prostitutes would be organised for IPPF staff, donors and partners during functions’

Kouakou said the IPPF claimed these activities continued under his stewardship. He denies this in the documents, calling it a ‘racially motivated’ attack on his integrity.

Kouakou’s court papers say he was accused of sexual harassment, staff bullying, discrimination against people from regions of Africa, ‘preferential treatment for staff engaged in sexual behaviour’, and breach of Kenyan labour laws.

The documents also reveal he was paid £100,000 a year, plus £940 a month for housing, £470 a month for security and private health cover – and that as regional director he was handed diplomatic status by the Kenyan government.

The saga seems to have led Alvaro Bermejo to resign after just 14 months in charge, saying his reform efforts had been frustrated.

Other top staff are understood to have quit amid fears the Kouakou case highlighted weak internal controls in a volunteer-based global charity with income of £80 million a year.

In another blow, all 45 member associations in the Western hemisphere region – including those in the US, Argentina, Brazil and Canada – opted to break away from the London-based federation.

‘They decided there are issues of accountability and transparency between head office and regional offices, although they did not specifically cite Africa,’ said one source in a breakaway association who was aware of the sex abuse allegations.

A letter signed by more than 200 administrative staff at the charity said they could not achieve their goals due to ‘inadequate implementation of our safeguarding policies’ and ‘devastating financial deficit.’

‘IPPF is in a major crisis,’ claim the staff based in Bermondsey, South London, and several other regional offices. ‘We are on the brink of losing everything we have worked for over the past 65 years.’

The influential charity was founded in the 1950s to fight for women’s rights. It pays lavish salaries at the top, with one official on more than £330,000 a year – a rise of £63,000 on the previous year’s highest salary.

The Dutch government, another major donor, sent a letter to the charity last week demanding ‘an independent review of governance and resource allocation systems immediately’ and warning it would review its contracts.

The IPPF governing council was locked in crisis talks yesterday.

Dfid said it was ‘concerned’ by developments and was demanding assurances that the charity’s leaders were ‘making the necessary reforms as a matter of urgency.’

A spokeswoman added: ‘All recipients of UK aid must meet our high standards, including on safeguarding and financial management.’

Kouakou declined to comment. A friend said he was infuriated by ‘unacceptable allegations being made against African leaders’.

The Charity Commission said IPPF had reported ‘serious developments’ regarding its operations. ‘We are looking into these urgently to determine our regulatory response,’ said a spokeswoman.

An IPPF spokesman said its African director had been dismissed after a disciplinary process, adding: ‘A court application made in Kenya by Mr Kouakou was rejected by the court in its entirety.’

He added that the governing council was discussing urgent concerns. ‘There is strong agreement that reform is vital. IPPF has kept all stakeholders aware of the issues it faces and welcomes their views and their involvement.’