British tourist dies after falling while rock-climbing in Malaysia

A British man has died in a rock-climbing accident in Malaysia.

He reportedly fell while on a climbing route in the Mulu National Park in the south-eastern Malaysian state of Sarawak.

The 50-year-old was reportedly on an outcrop known locally as the Pinnacles on March 26 when the accident occurred.

A helicopter taking the climber, who was still conscious, to hospital but he later died

He was attended by Mulu Park’s own search and rescue team, who brought him, still conscious, to a camp that could be reached by helicopter.

The Miri Fire and Rescue Department chopper took him to Miri General Hospital in Sarawak, though he was reportedly unconscious by 2am that night.

He died the morning after the fall from serious injuries to his head and body. 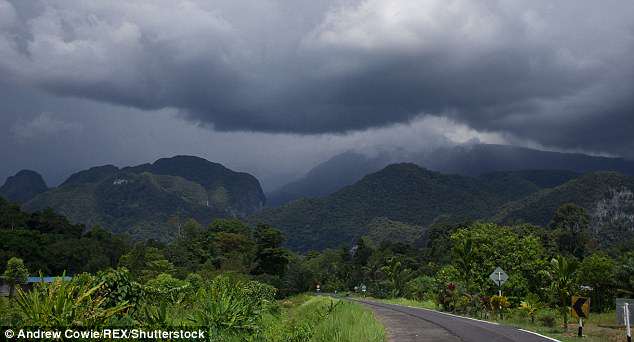 ‘At that time, he was still conscious and could speak. However, he passed away early this morning.’

According to local news website bharian.com he lost his balance when traveling down from the summit he fell at a height of about 5600 feet.

The website said a friend with whom he was climbing alerted the authorities.

It was not reported where the man came from in the UK, how the accident occurred or who was with him at the time.

Malaysian media did not report how much rock-climbing experience he had.

He was reported to have been on holiday in Malaysia but it is not known whether any relatives were with him.

A Foreign Office spokesman said: ‘We are in contact with the Malaysian authorities about the death of a British national in the Mulu National Park and stand ready to provide consular assistance.’