British tourist is raped by a taxi driver in Puerto Banus

Police are investigating the alleged rape of a British tourist by a taxi driver working in the upmarket Costa del Sol resort of Puerto Banus.

The distressed holidaymaker told officers he forced himself on her after taking her to waste ground instead of leaving her at her hotel.

She took the cab after deciding to leave friends she was out partying with and return to the unnamed hotel around 4am on Sunday.

It comes just a day after a 19-year-old Scottish woman was gang-raped by one of her friends and two of his friends on a beach in Magaluf at 1am Saturday.

The latest victim has been unable to give police a proper description of the man she says raped her, or any detailed information about the car he was driving including his taxi number.

She alerted detectives after being abandoned in an unidentified street near her hotel.

Police have so far revealed few details about their ongoing investigation, although sources described the holidaymaker as British and said she was in her twenties.

She is thought to have flown back home since reporting the incident while police continue their hunt for the suspect.

Police insiders say they are taking her complaint ‘very seriously’ and have described her as being in a ‘state of shock’ when she informed them what had happened.

No arrests have yet been made and it is understood the police investigation is being slowed down by the woman’s memory lapses due to the alcohol she had consumed. 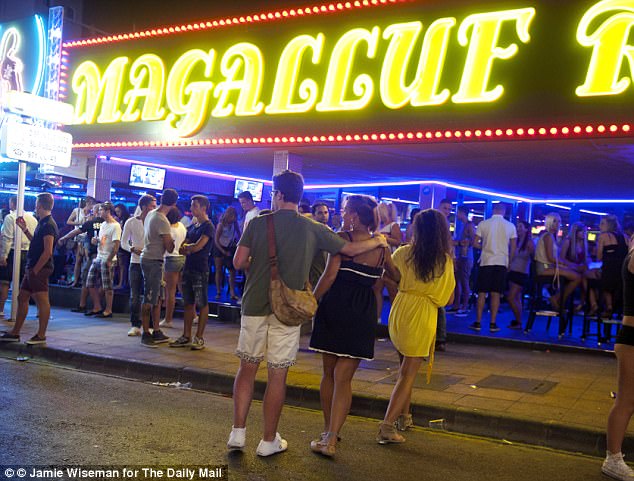 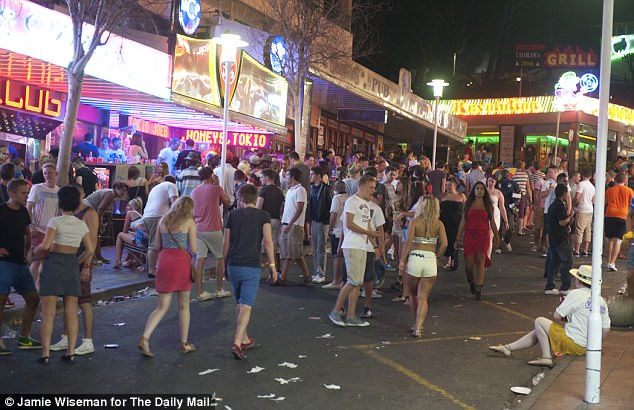 The Punta Ballena strip in Magaluf, where a woman says she was raped on a beach (file image)

News of the Puerto Banus incident comes after a Scottish tourist reported being gang-raped by three men in the Majorcan party resort of Magaluf.

It emerged yesterday she had shown investigators a photo of one of her alleged attackers believed to have been on her mobile phone.

The 19-year-old told officers she agreed to go to a beach near the party strip of Punta Ballena with one of the men – but was raped by him and two uninvited pals around 1am on Saturday.

She said she had called out for help while she was being forced to have sex but no-one came to help her.

DNA tests are being performed on her clothes to try to extract evidence.

The nationalities of the alleged offenders has not been revealed, although they are thought to be British.

Civil Guard officers in Majorca confirmed this morning they had yet to make any arrests.

A spokesman for National Police covering the Puerto Banus area, speaking of the latest incident, said: ‘We are investigating a complaint of a sexual attack.

‘We are not giving out any details about the complainant for obvious reasons. All I can say is that she is foreign.’