A British tourist in Benidorm was beaten by a gang of ‘con men’ after warning holidaymakers about a street scam.

The man was seen telling passers by of the ‘trileros’ scam which involves participants guessing which cup a card or object is hidden under.

Passers-by are then asked to place bets on which potato the object, usually a pea, is under.

But the men carrying out the street trick attacked a British holidaymaker after he kept warning fellow tourists not to take part.

A British man was held on the ground while other members of the ‘trileros’ gang stamped and hit him with bats in Benidorm. Another tourist in a red shirt tried to stop him being attacked any further by a man armed with a wooden bat 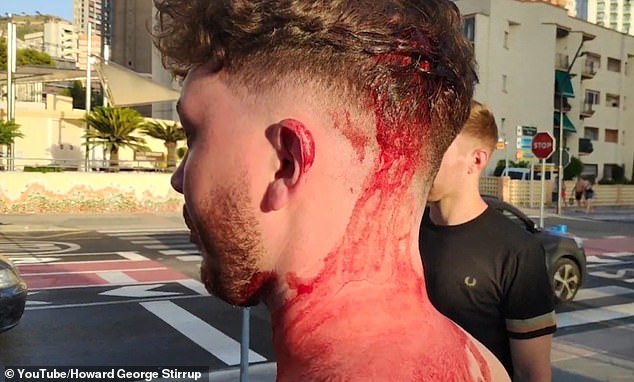 He was set upon by a group of around seven men outside a row of tourist shops and hit around the head with bats in the bustling central Gerona street of Benidorm earlier this week.

One attacker smashed an object over his head while another wrapped his legs around him as the pair grappled on the floor.

While he lay on the ground, others kicked and stamped on him as some hit him with bats.

Some tried to break up the fight and one unnamed man emerged from the melee with blood pouring down the back of his neck and head.

The vicious assault was recorded by another tourist, who then posted the video on YouTube which was viewed more than 1,600 times. 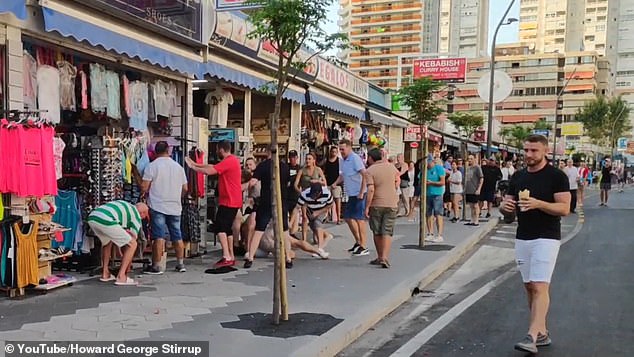 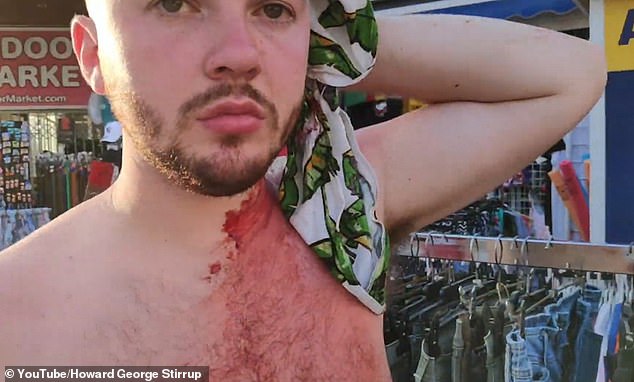 Another British man who intervened in the attack to break it up told the camera he had previously seen an elderly woman get ‘scammed’ by the street artists.

The video went on to warn tourists about the ‘scammers’ also known as ‘pea men’.

It is known as one of the Spanish holiday resort’s ‘oldest scams’ and is said to be run by criminal gangs.

The rigged street game can also involve spectators choosing which potato a pea has been hidden under and paying a high fee to take part.

Bets can cost up to €50 each and some unsuspecting participants have also found themselves pick-pocketed as they gamble.

The alleged scammers even use look outs and fake players to make it look like an easy game to win. 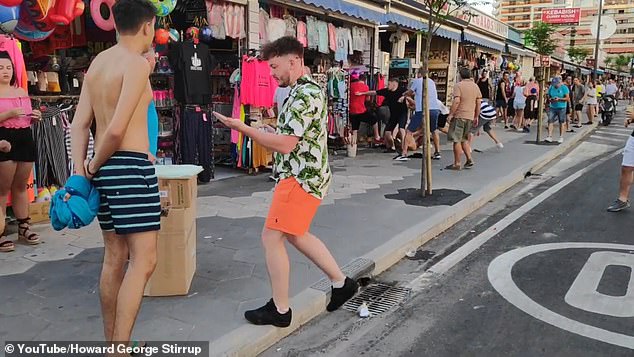 According to the video posted last Friday, police asked the British man and his friends to go to a nearby hospital to treat their injuries and then to the police station to try to identify the attackers from the officer’s records.

But the clip claims the gang were watching from the front of the medical centre and decided to suspend their complaint as the victim did not carry his identification documents.

A judge in Benidorm previously issued a restraining order against a gang of ‘pea men’ after they robbed tourists who refused to bet on their game tables in the street, according to Diario Informacion.

Other British tourists have complained of being ‘cornered’ and having their wallets or purses ‘ripped’ from their hands by a gang of ‘pea men’, according to TripAdvisor.