British trainee dental nurse, 26, flies to Arizona to marry US death row inmate, 35, after telling her family she was going on holiday to Disney World

A British trainee dental nurse said she was going to Disney World before she flew to Arizona and married a death row inmate who killed two people and dumped one of their bodies in an alley.

Rebecca Short, 26, from Chipping Norton, Oxfordshire, told her family she was on holiday in the US and even posted holiday snaps from Disney World, Florida, and the Golden Gate Bridge, San Francisco.

However, she surprised her relatives by posting photos of herself marrying Mexican-American double murderer Manuel Ovante Jr, 35, who is on death row at Eyman jail, Florence, Arizona.

Ovante has spent more than a decade in jail after he was sentenced to death in 2010 for murdering two men as he was looking for methamphetamine in 2008.

Rebecca Short, 26, from Chipping Norton, Oxfordshire, told her family she was on holiday in Disney World, Florida, before saying she had married a US death row inmate 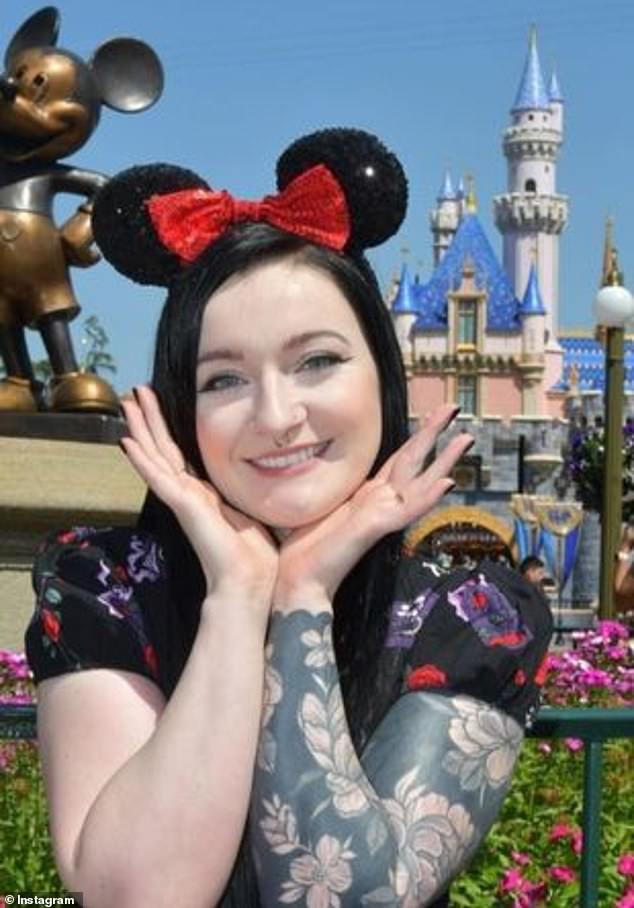 The trainee dental nurse posted a photo of herself in Mickey Mouse ears from Disney World, Florida

Ovante went to a man’s house on June 11, 2008, with three of his friends as they searched for drugs.

The group encountered three other men inside. Ovante shot one of the men twice in the head as he slept and wounded the two others.

Ovant and his friends then took one of the injured men with them and dragged him behind their truck as he bled from his gunshot wounds until he died.

They dumped the man’s corpse in an alley. The other injured man survived the attack.

The double killer was allowed to leave his cell to wed his British pen pal bride on April 14 and smiled as he posed for a picture.

Rebecca celebrated the marriage with Ovante’s family and showed off a tiered wedding cake with black icing and the words ‘Till death do us part!’

Ovante is one of 113 death row prisoners at the Arizona jail, where inmates set for execution typically spend 17 years before they are killed by lethal injection. 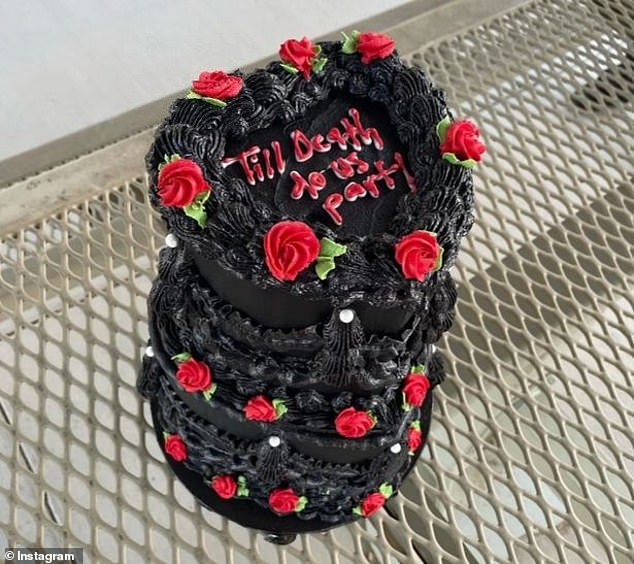 She celebrated the marriage with a tiered cake with red roses and black icing that read ‘Till death do us part!’ 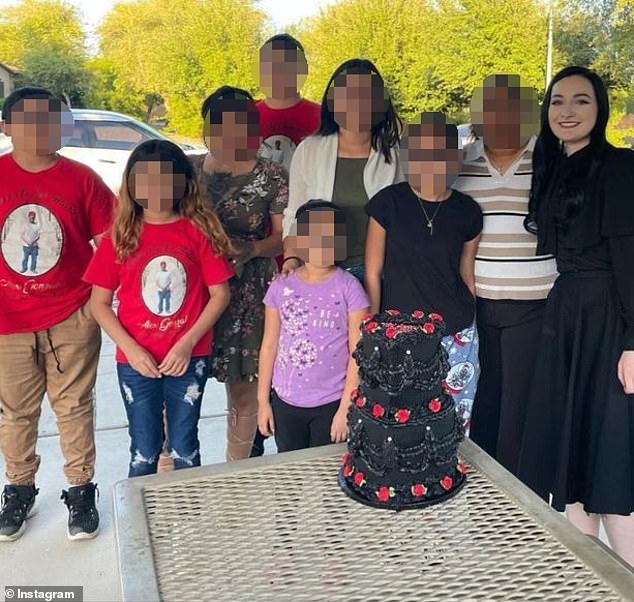 She also posed with the double killer’s family after she married him. She met Manuel Ovante Jr, 35, who is on death row at Eyman jail, Florence, Arizona, via a pen pal site for prisoners

One of her friends said she was ‘always obsessed with watching Netflix documentaries about serial killers in America, but no one thought she’d run off and marry one,’ in an interview with The Sun.

The Oxfordshire woman posed in a black dress with Mexican-American Ovante, who was in his prison-issue orange jumpsuit.

She had written to him after coming across his pen pal profile on the internet, which said, ‘I’m easy to get along with and tend to be a goofball.’

Ovante also wrote he was ‘Very loyal to people I care about’.

He said: Nobody is perfect, so I hope not to be judged by past mistakes.

‘I love to read and listen to music. I have a daughter named Bonnie.

‘Not sure what I’m looking for in a pen pal so, I guess you’ll have to surprise me.’