Excessive rain and a lack of sunshine have caused hospitalization rates of the bone-softening condition to reach their highest levels in 50 years, a Canadian study found.

This comes after cases of the ‘Victorian’ disease scarlet fever rocketed by almost 55 per cent in just one week last December. Plummeting temperatures have been linked to the increase in incidences.

Previous research reveals Britain is set to become colder as the Gulf Stream current that keeps temperatures mild slows down.

Britain is bracing itself for hurricane-force gales and heavy rain tonight and tomorrow as Storm Eleanor arrives, bringing threats of floods and ‘risk to life’, with one tourist already dying after a freak wave swept her out to sea.

Vitamin D, which is also found in oily fish, is vital for the absorption of calcium and phosphorous, which contribute to bone strength.

In youngsters, lack of this vitamin can cause rickets, which is defined as bones becoming soft and weak, leading to bowed legs, curvature of the spine, and thickened ankles, wrists and knees.

IS THE COLD WEATHER TO BLAME FOR THE 55% RISE IN SCARLET FEVER CASES?

Government statistics show 544 people were struck down with the condition towards the end of December, compared to 352 in the previous week.

The Public Health England data follows the 19,079 cases that were recorded last year, which was the highest total reported since 1967.

Officials are unsure why scarlet fever is continuing its rampage across Wales and England, but experts have previously blamed a fall in living standards.

The infection is also known to mostly strike in winter and spring, with a further surge in cases expected as temperatures plummet.

Scarlet fever is most common in children under 10. It causes a sore throat, fever and rash, which can lead to life-threatening pneumonia.

Researchers from the University of Toronto analyzed hospital admissions for rickets in children under 15 years old in four UK counties between 1963 and 2011.

Sea surface temperatures are associated with rain and sunshine.

‘We can save children from becoming disabled’

During this time, increasing cloud cover has deprived the UK of around four hours of sunshine a month.

The nation has also only received an average of 183 hours of sunshine in each summer month.

‘My mother has rheumatoid arthritis, which led me to [develop] rickets. Perhaps if we’re able to understand this condition based on long-term climate variability, can we as scientists save at least a few children from becoming disabled.’

The findings were published in the journal Nature Scientific Reports. 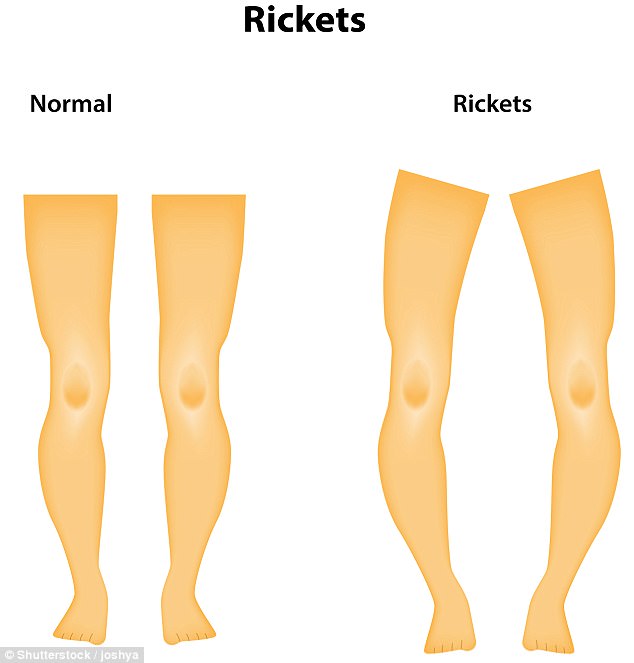 Vitamin D can cause rickets, which is defined as bones becoming soft, leading to bowed legs

A holidaymaker has died after being swept into the sea as Storm Eleanor lashes the nation’s shores, bringing heavy downpours and gale force 80mph winds.

The Met Office has announced severe weather warnings for much of the country from today as Storm Eleanor, the fifth named storm of the season, brings a ‘very windy’ spell to the UK from tonight and Wednesday.

The storm has already created ‘treacherous’ conditions along the coast and claimed the life of a woman who was out walking at the Lizard in Cornwall on New Year’s Day when she was caught by a freak wave that swept her out to sea.

The lifeboat and coastguards scrambled to her aid just after 1.15pm on Monday and carried out a land and sea search of the area following reports of a person being in the water.

The woman, believed to have been on holiday in the area, was subsequently found on the beach and winched into the coastguard helicopter, which transferred her to the Royal Cornwall Hospital in Truro.

A coastguard spokesperson confirmed this morning she was declared dead at the hospital.

Rickets, known as osteomalacia in adults, affects bone development in children, putting them at risk of later fractures.

It is usually caused by a lack of vitamin D or calcium. Vitamin D largely comes from exposing skin to sunlight, but is also found in oily fish, egg yolks and fortified cereals.

Any children with insufficient vitamin D levels are at risk of developing the condition, however, it is more common in those with dark skin, as well as youngsters born prematurely or taking medication that interferes with vitamin absorption.

Prevention and treatment both focus on ensuring children take supplements or eat foods that contain calcium and vitamin D.

Why is the UK getting less sunshine?

Previous research reveals Britain is set to get colder as the Gulf Stream current that keeps temperatures mild slows down.

The ocean current carries warm water from the Gulf of Mexico to Britain, which prevents freezing temperatures in winter.

Researchers from the University of Washington believe a current around the southern tip of Africa may be behind the problem.

The so-called Agulhas Current brings warm Indian Ocean water along the tip of Africa into the Atlantic.

Changes to this current are thought to be affecting the Gulf Stream.