Dozens of Britney Spears fans and followers of the #FreeBritney movement gathered outside a court in downtown Los Angeles Wednesday while inside a hearing was held over the troubled pop star’s controversial conservatorship.

‘Britney should be allowed to have control of her own life, her money, her career, her travel, everything,’ longtime Spears fan Christina Taft, 25, told DailyMail.com as she stood outside LA Superior Court holding a placard reading ‘End the Conservatorship.’

Taft who traveled 300 miles by bus from San Jose, California to be at the protest, added that Britney’s conservatorship – which has given her father, Jamie Spears strict supervision over her lifestyle and career for 11 years – has made her a ‘prisoner.’

’She should be set free and given back her rights. Her music is all about personal freedom – yet she herself is being denied that.’

Dozens of Britney Spears fans and followers of the #FreeBritney movement gathered outside a court to protest against her conservatorship. Her father Jamie, left, recently stepped aside from some of his duties as conservator of Britney’s estate, transferring responsibility for her medical and personal decisions to her care manager 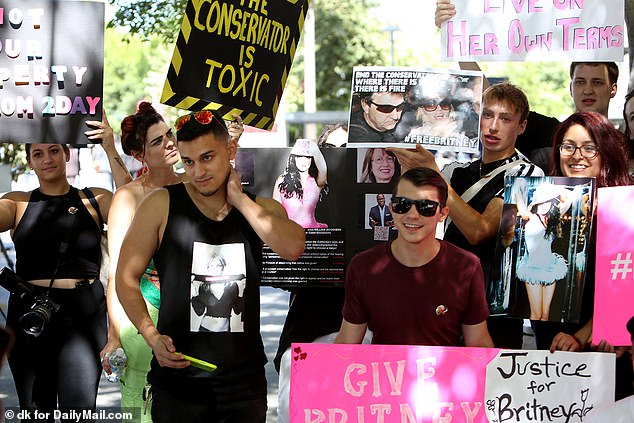 Supporters gather for the ‘Free Britney’ movement to end her conservatorship with her father outside the LA Superior Courthouse. 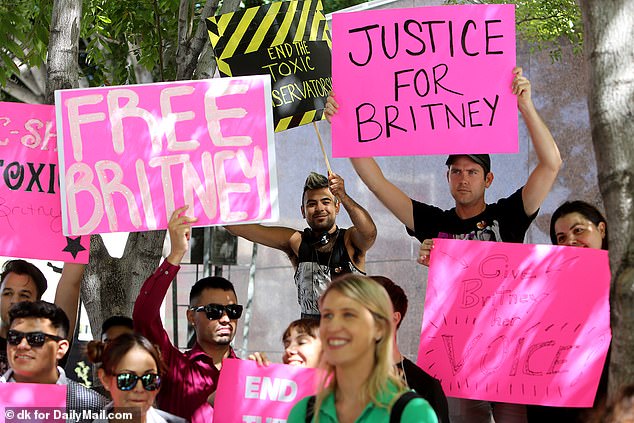 While the protesters marched up and down outside the courthouse carrying signs with slogans like ‘Let Britney Live on Her Own Terms’ and ‘The Conservator is Toxic,’ inside, Judge Brenda Penny cleared the courtroom and sealed the transcript

Another protester who joined the crowd in chatting choruses of ’Free Britney’, Justin Pease, 32 ,of West Hollywood, CA, told DailyMail.com: ‘I’m here to raise awareness of the injustice that is being done to Britney. She is a cash cow for all theses other people – yet she’s not allowed any control over her money or her life. She has rights like everyone else.’

While the protesters marched up and down outside the courthouse carrying signs with slogans like ‘Let Britney Live on Her Own Terms’ and ‘The Conservator is Toxic,’ inside, Judge Brenda Penny cleared the courtroom and sealed the transcript from Wednesday’s hearing, saying issues being discussed – including Britney’s medical condition, her two sons and her personal finances – are too private and confidential to be aired in public.

Her father Jamie Spears, 67, and Britney’s mother Lynne, 64, were both in court along with a small army of lawyers representing them, the star herself, and the conservatorship. 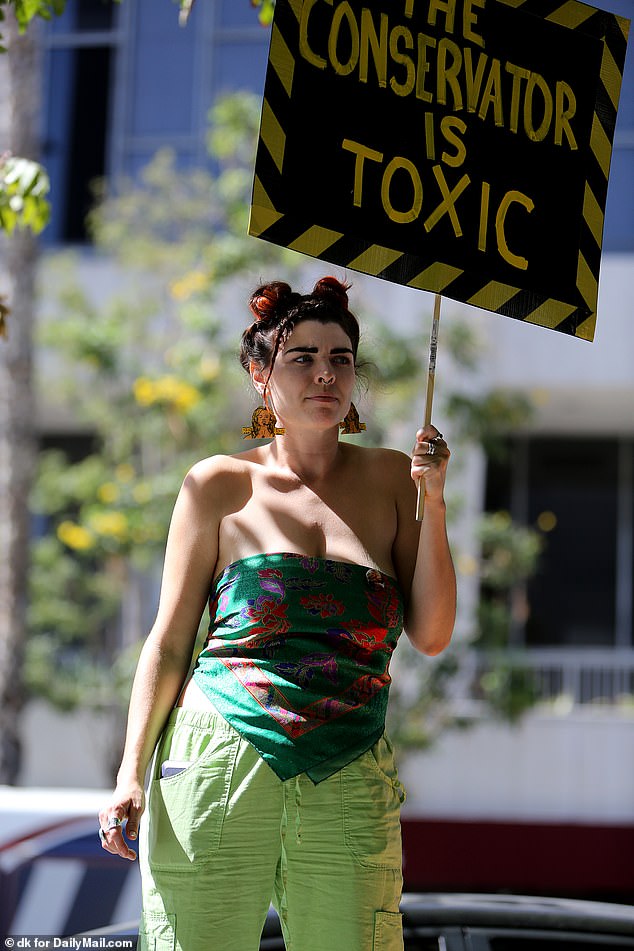 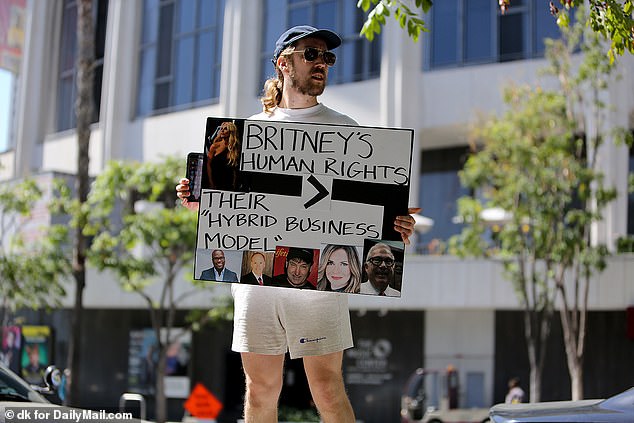 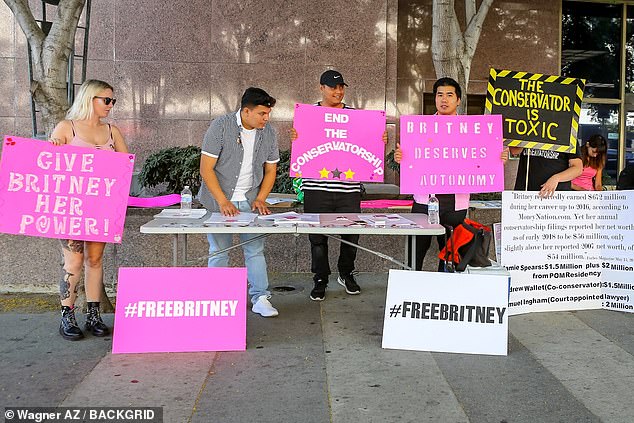 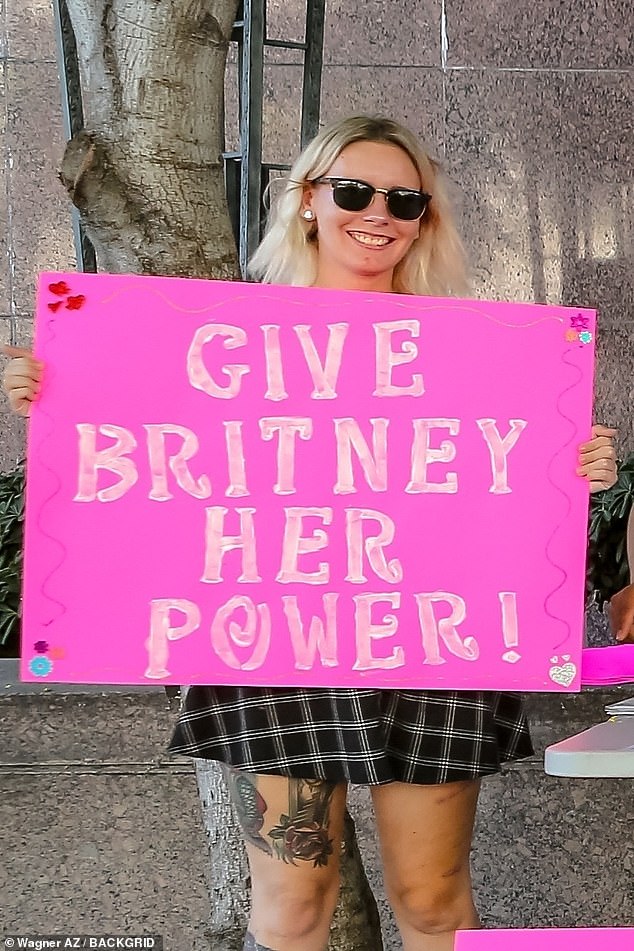 Another fan holds up a big pink sign that reads ‘Give Britney her power!’ 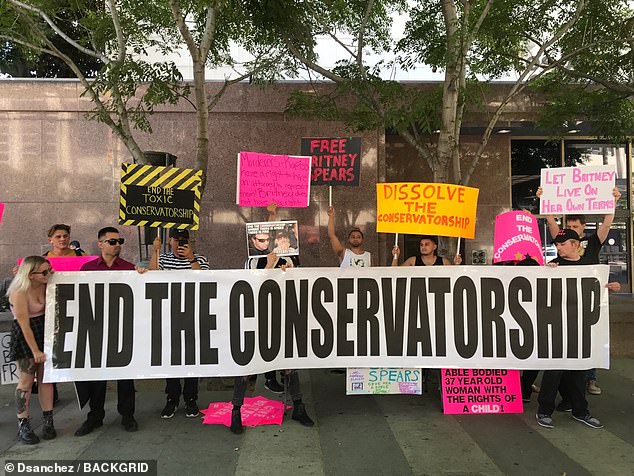 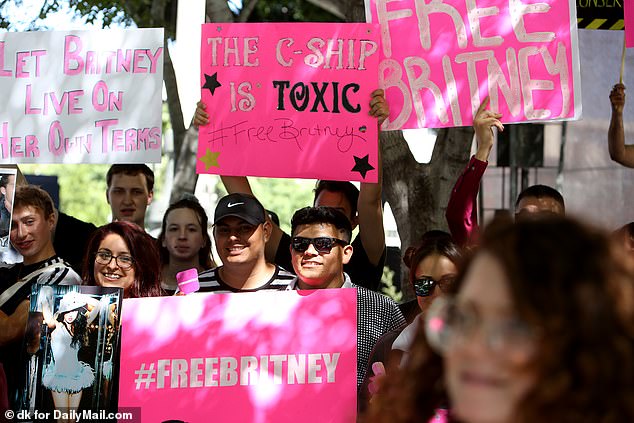 While he blamed his stepping down on recent health issues, Jamie’s decision came amid accusations that he had gotten into an altercation last month with Britney’s 14-year-old son Sean Preston

Kevin Federline – Britney’s ex and the father of Sean and his brother Jayden James, 12 – made a police report and took out a restraining order against his former father-in-law after the incident in which, reportedly, a ‘very angry’ Jamie broke down the door of a room Sean had locked himself in and ‘shook’ the frightened teen.

Britney was said to be furious over what happened and worried that the incident could jeopardize the joint custody agreement she has with Federline that already gives him a much larger percentage of time with the boys than she has.

Though her father – who became the singer’s conservator in 2008 after her very public meltdown – has temporarily relinquished his responsibility for the star’s medical and personal needs, he is reportedly still in charge of her investments, business deals, check-writing and other financial matters. 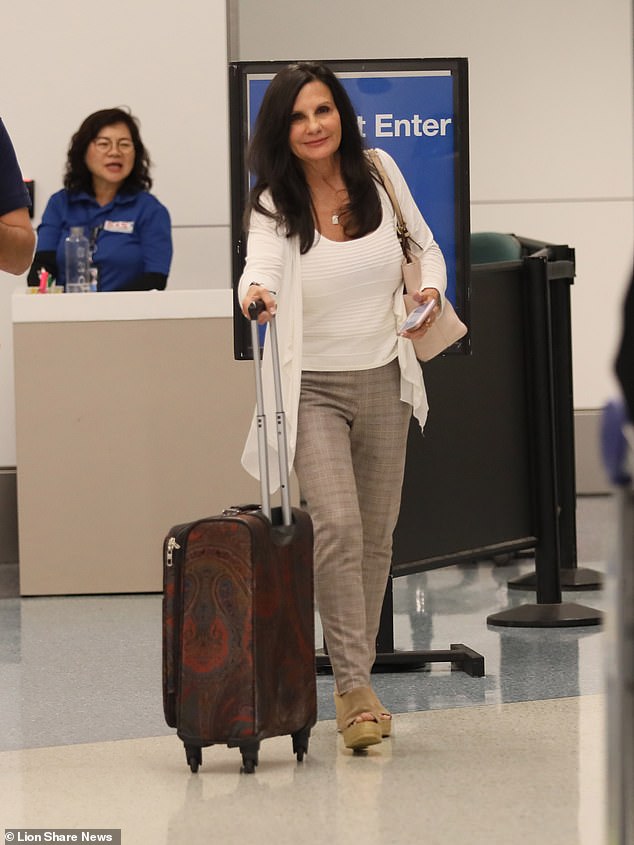 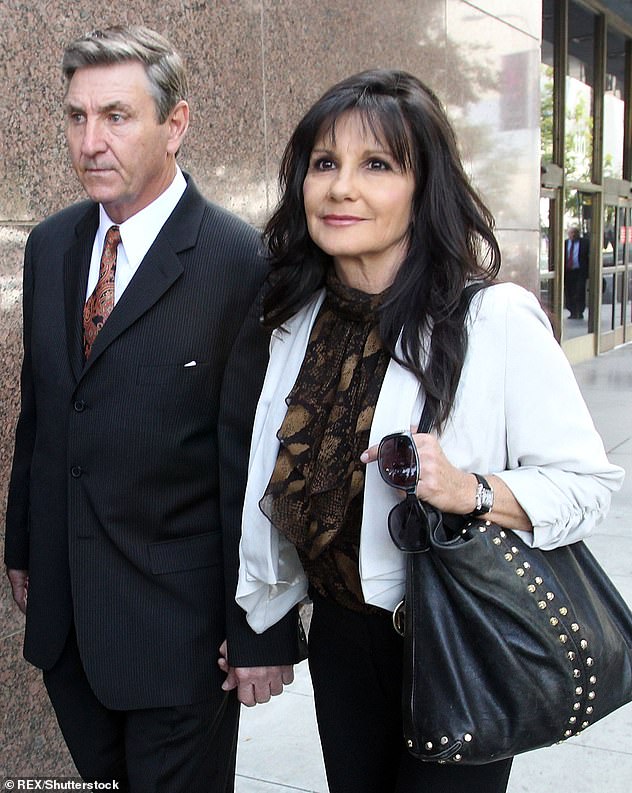 Lynne is reportedly set to ask a judge to terminate Jamie as Britney’s conservator as she believes he is ‘no longer fit’ to continue in the role. The former couple are pictured in 2012

Montgomery – who was named temporary conservator until January 20, 2020 – was granted the ‘same powers’ Jamie relinquished, which, said court documents, include ‘the power to communicate with treating and other expert medical personnel’ regarding ‘the pop star, and having access to any and all records regarding her ‘psychiatric treatment, diagnosis and testing.’

According to one report, ‘Jamie will still get updates about Britney and Jamie will make sure that she is protected against people who want to take advantage of her….and Lynne will also be around if Britney needs her.’

Last May, Lynne Spears went to court – hand in hand with Britney – to try to take a bigger role in the care of her daughter and support Britney’s request to Judge Brenda Penny that she be given more say in her life decisions than the conservatorship allows.

Lynne reportedly wanted the judge to grant her more access to medical records and treatment plans for Britney, who pulled out of her Las Vegas residency show Domination in January and soon afterward, spent a month at a mental health facility.

While it’s understood Judge Penny denied Britney’s request to ease the restrictions on her, she ordered a full report on the status of the conservatorship plus the shared custody agreement she has with Federline of Sean and Jayden.

Included in that report – due to be completed by today- are details about Spears’ finances which, according to court documents, show the pop icon is worth $59 million, her income last year was $13 million and her day-to-day living expenses in 2018 totaled $412,000.

She also paid her dad $128,000 last year for running her conservatorship, the court papers added.

It was Jamie’s close monitoring of Britney’s career and lifestyle that led some of her diehard fans – who believe she’s being prevented from getting the freedom she wants – to launch the so-called ‘#FreeBritney’ movement.

In June, Judge Penny granted Spears’ request for a five-year ‘civil harassment’ restraining order against her ex-manager Sam Lutfi after he was accused of stirring up the ‘#Free Britney’ movement by urging followers to ‘Raise Hell’ and ‘Unleash’ against her conservatorship, which ran up legal expenses and other fees totaling more than $1.1 million last year, according to court documents.

Attorneys for the conservatorship, told the court at the time, ‘Lutfi is calling them (the Spears family) hillbilly criminals. This has to stop. Jamie Spears has been begging Mr. Lutfi for more than a decade to stay away from his family.’

The Spears legal team claimed that Lutfi repeatedly contacted Lynne Spears and tried to incite her fans with the ‘#Free Britney’ movement. They accused Lutfi of ‘vigilante action, bribes and the release of private information’ to undermine the pop star’s conservatorship and sending a series of texts to Lynne in an effort to take Britney’s conservatorship away from Jamie and have Lynne take over.

Lutfi’s attorney countered that Spears’ lawyers were trying to make Lutfi a ‘scapegoat of the ‘#Free Britney’ movement…… ‘He cannot be blamed for the movement – it is independent of him. He is not the person behind it.’

Despite the protests from Lutfi’s lawyer, Judge Penny decided in Spears’ favor, slapping Lutfi with the restraining order which means that for the next five years, he must stay at least 200 yards away from her, her two children, her parents and her boyfriend, Sam Asghari.