Briton, 19, goes on first holiday since being caught in Tunisia beach attack

A British teenager left with severe PTSD after she was caught up in the Tunisian terror attack in 2015 has gone on holiday and visited a beach for the first time since.

Millie Twells, from Derbyshire, went on a 10-day break to Rhodes, in Greece, with mother Zoe in July this year where she confronted her fears by donning a bikini and posing for photos on the sand.

It marks a remarkable milestone for Millie, now 19, who was left suffering several panic attacks per day and was unable to cope with being in public places after she witnessed people being killed in the ISIS attack aged just 15.

Millie Twells, now 19, posed on the beach in Rhodes, Greece, in July this year as she went on her first holiday since being caught up in the Tunisia beach attack in 2015 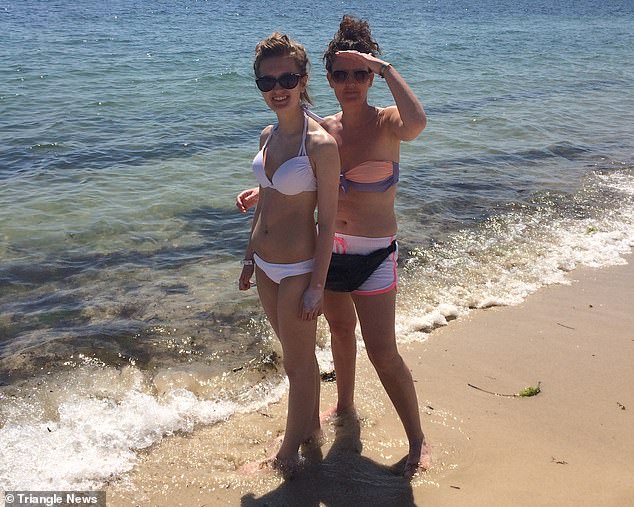 Millie was on the second day of a family holiday in Tunisia with mum Zoe (pictured) when ISIS gunman Seifeddine Rezgui opened fire, killing 38 people – 30 of them Britons 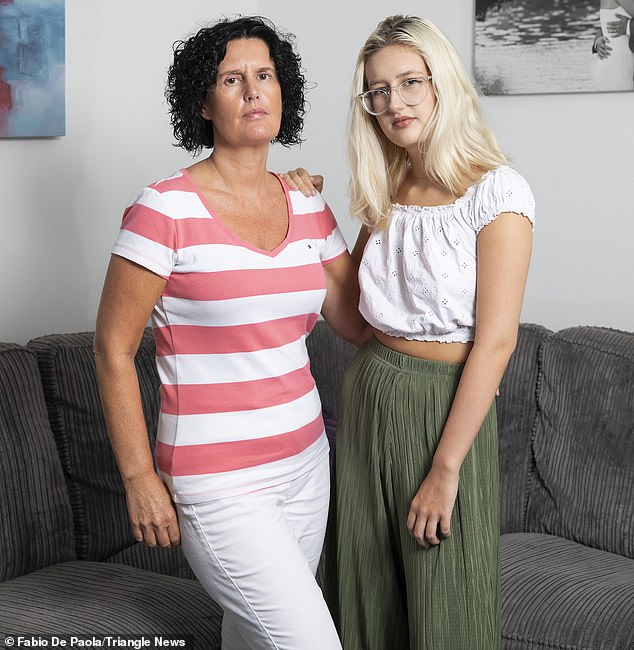 Zoe (left) told how she left Millie to fetch her bag from a sunbed when the shooting started, and got separated from the then-15-year-old during the carnage

Speaking after the holiday, Millie said she has ‘finally closed the chapter’ and is ready to move on with her life.

She said: ‘All I wanted to do was go to the beach and do what other people take for granted.

‘It was a form of therapy for me, like taking the power back. I wanted to experience it again knowing nothing would happen.

‘Holidays have always been the best time of the year, you’re excited all year, and Tunisia took that away from me.

‘This holiday felt like closing a chapter on it. Overall I’m really proud of myself.’

Millie was on the second day of a holiday to Tunisia in June 2015 with mother Zoe and stepfather Paul when ISIS jihadi Seifeddine Rezgui launched a gun and grenade attack on the beach resort of Port El Kantaoui.

He gunned down tourists on the beach using an AK47 rifle before moving inside the Riu Imperial Marhaba Hotel, where Millie and her family were staying, in order to he carry on the massacre.

Rezgui was eventually shot dead by security forces in a street close to a neighbouring hotel. In total he killed 38 people, including 30 Britons.

Zoe explained: ‘We’d just done aerobics in the pool and Millie had been put down to play darts which was outside at the side of the pool.

‘Ten minutes in I’d said because we were all soaking wet I’d go back to the sunbed and get my bag. It was on the other side of the pool.

‘I’d just got there and that’s when the gunshots started. It was ‘pop pop pop’ noises to start with.

‘Straight away I knew what it was. It was full on machine gun fire and people had started running off the beach.’

Remembering the carnage, Zoe, 46, said: ‘He came up, he was shooting and running into the hotel. 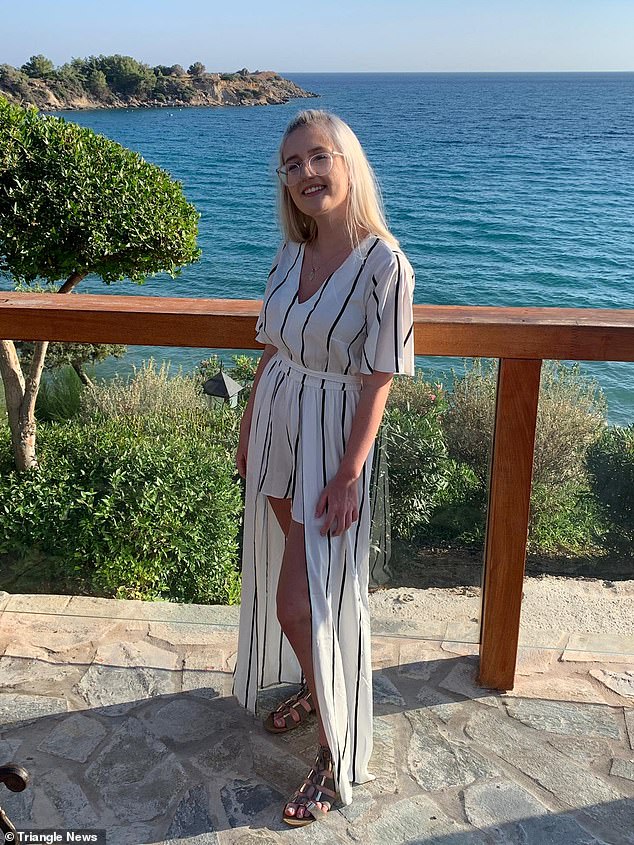 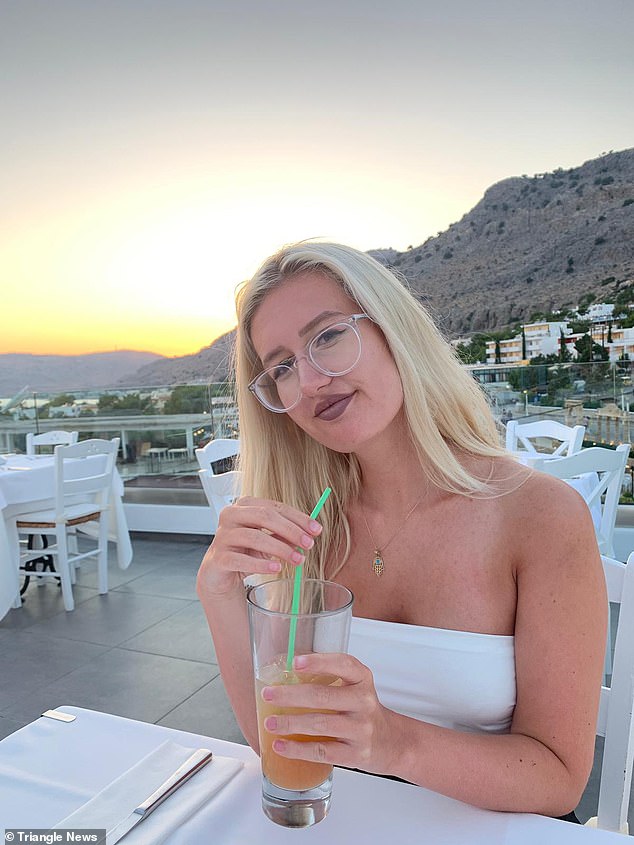 Millie recalled hearing screams as people were shot outside the door of the office where she was hiding, and had to walk through a pool of blood to get out again when the attack ended

‘There were a few people killed as we were running. I got into the hotel. Quite a few people were going down the corridor leading to the indoor pool but I didn’t go down there because I figured I’d bump into Paul and Millie in the lobby.

‘But I got there and there was nobody there.’

Zoe, a commercial manager, was beckoned into an office near the hotel gift shop and stayed there as Rezgui carried on his bloodshed, firing with a Kalashnikov and throwing grenades.

Despite Zoe’s hopes, Millie had actually become separated from Paul and had run into the hotel another way, but met a dead end.

As gunfire raged, she was forced to double back, skirting close to the gunman.

As she reached the lobby, a man told her to get behind the reception and they then went up some stairs.

Millie and the man were chased by Rezgui, who shot three people in the corridor behind them, but made it into an office along with 15 others who barricaded and locked themselves inside, hoping the gunman would think it was empty.

In fact Rezgui did try the door, but moved off down the hallway after he was unable to open it.

Millie said: ‘Everyone else was laying there waiting to be killed and I was trying to figure out how to get out.

‘I remember being laid on my front and it felt like I was moving off the ground because of how fast my heart was beating.

‘I kept telling myself that if I died at least it would be quick and wouldn’t hurt.’ 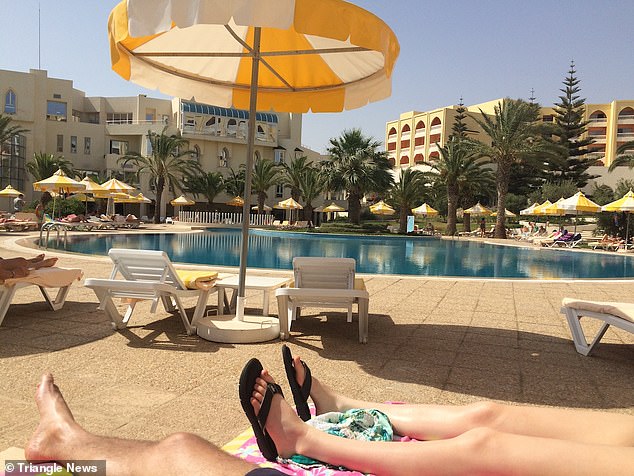 Six weeks after returning from the holiday (pictured, Millie’s family sunbathing at the resort on the day of the attack) Millie suffered her first panic attack, and was diagnosed with PTSD

Meanwhile Zoe – in another room not far away – had called her mum in Derby who had contacted UK counter terrorism officials. They were at her mum’s house within 15 minutes, where Zoe was quietly able to explain to them what was happening.

When police gave guests the all clear, Zoe’s desperate search for Millie began, but she had no idea what she would see when she left her hideaway.

‘I started running around the hotel trying to find Millie and Paul,’ she recalled.

‘I went out the back, saw there were bodies on the steps, then I came back in. It was absolutely surreal.

‘I can’t remember how long it was but eventually I was back in the lobby and that’s when I saw Paul, but he didn’t have Millie.’

Describing the pain of not knowing where Millie was, she said: ‘It was physical pain. The worst thing I’ve ever felt in my entire life.

‘Paul said he’d already been out the back and he’d checked every single body and she wasn’t there.’

Paul had become separated from Millie and had run to a neighbouring hotel. He wasn’t far from the terrorist when he was shot dead.

Millie then came out of a door behind reception holding a lady’s hand.

Frantic Zoe said: ‘The only thing that was wrong with her was that she’d got blood on her feet.

‘I started checking her all over and this woman was explaining that the reason they had got blood on their feet was that two people had been killed outside the room they were hiding in so they had to walk through it.

‘Millie was in shock. I grabbed hold of her and hugged her and there was no real response.’

After being held in the hotel for hours, the trio were told that three planes had been chartered to take victims back to Britain.

Millie was desperate to return to their home in Ilkeston, Derbyshire.

From then on, their lives would never be the same again.

Zoe and Paul were offered therapy, but their psychologists were unable to treat Millie because she was underage. 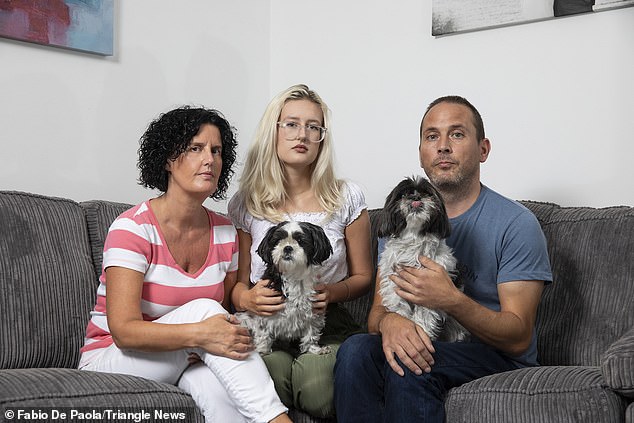 Millie (centre, with mother Zoe, left, and stepfather Paul, right) suffered near-daily panic attacks and struggled to deal with public spaces in the wake of her trauma 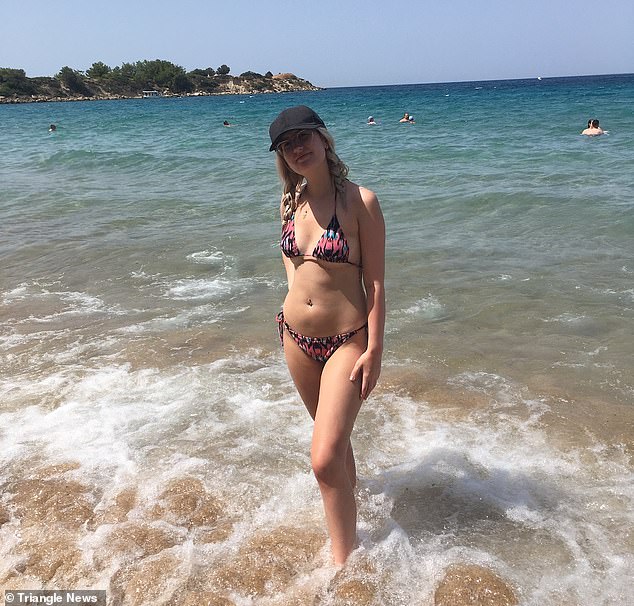 In July this year she went for a 10-day break with her mother to Greece and insisted on going to the beach, saying it felt like ‘closing the chapter’ of the attack

There were no specialist terror psychologists available and normal therapy made the teen worse.

She needed eight months off school, missed much of her GCSE lessons and suffered her first panic attack six weeks later.

Millie said: ‘I was in shock for maybe a month afterwards then I had my first panic attack on August 7.

‘After that it was flashbacks all the time, feeling the blood on my feet, hearing the screams, I never got away from it. I wasn’t able to do simple tasks.

‘I remember we went to Nandos once, it was the first time I’d gone out, but we had to leave straight away. It was too loud and we just couldn’t deal with it.

The youngster lost one and a half stone and couldn’t eat or think straight.

‘I felt guilty I’d survived when other people hadn’t,’ she said.

‘That was the main thing. I don’t feel it as much anymore because now I accept it. It was me not being able to save other people.

‘I was in an office room and there were people outside that were screaming and I couldn’t do anything to help.

‘I felt “Why have I survived?” I had to be silent while other people were dying.’

Zoe added: ‘Life doesn’t go back to normal after something like that. For a while we thought we’d try and carry on but it just doesn’t work.

‘Millie was very anxious. She was scared of everything.

‘She started getting several panic attacks a day. It was awful. We couldn’t get any help.’

Millie managed to sit seven GCSEs – getting four Bs and three Cs – but was diagnosed with PTSD.

In March 2016, Zoe was asked to go to a remembrance day for victims of terrorism in Brussels.

There she met representatives from the Omagh Support & Self Help Group (OSSHG), a charity founded in the aftermath of the Omagh Bomb in 1998.

They paid for Millie to go on a young ambassadors programme in New York in May 2017 with the charity Strength to Strength, which brings together young survivors of terrorism.

It was then that Millie began to heal from the trauma as she found solace talking to people who had been in similar situations.

She also decided she wanted to study in America, where she could be close to those she felt understood her.

Last year, she received five offers from New York colleges and chose to do a media degree at Five Towns College in Long Island.

Millie said: ‘The support just hasn’t really been there for me here in the UK. In New York I’ve found my community. It’s my home.’

And Zoe added: ‘The reason she chose New York was because it was the only place she felt safe and understood.’

In her summer holidays this year, Millie and Zoe chose to travel to Greece after Zoe’s dad became ill and they couldn’t go on a holiday they’d booked.

Amazingly, Millie decided she’d like to try and go in their place with her mum.

Despite a few anxious moments, the pair say they had a wonderful time.

Millie added: ‘I kind of underestimated it a bit. I hadn’t been on holiday in four years so it had been a while. I’d tried not to think about it until I got there.

‘I knew it’d have some kind of impact but I just didn’t know how much.

‘I didn’t want to let terrorism win because at one point I couldn’t even leave my house letalone think about going on a beach resort holiday.’

And Zoe said she was intensely proud of her girl.

‘The first day she got there she lay on a sunbed and then within the hour she said ‘I want to go to the beach.’ I was like ‘wow’.

‘She took her flip flops off and went straight into the sea.

‘With PTSD everything makes you anxious. It happened. It’s a memory. It’s going to shape her.

‘But it’s also made her more determined. Millie says there are people out there that don’t have that chance at life. Someone her age now died in Tunisia and she wants to live for them.’