Privately educated George Fay, pictured, has pleaded not guilty to three counts of rape, sex abuse, and committing a criminal sexual act while the woman was ‘physically incapable’ of consent

George Fay is said to have shaken his friend awake before telling him: ‘She kissed my neck, so I started running with it and one thing led to another.’

His friend, giving evidence for the prosecution on the fourth day of 23-year-old Fay’s trial, said they had earlier peeked at the woman sleeping with their friend Jack Slye.

Admitting he was intoxicated after a night drinking beer and gin and smoking marijuana, his friend said he fell asleep on the sofa but was ‘abruptly’ woken up.

‘George shook me awake. He was distressed,’ the Goerge’s friend told a jury at New York Supreme Court.

‘I didn’t grasp the situation. I remember the girl was screaming at George, then Jack took the girl down to the lobby of the apartment complex.

‘Then there was a knock on the door and a police officer was there.

‘George sat down next to me, I believe he said, ‘This is not good.”

After Fay’s arrest, George’s friend said he checked into a hotel, then went to a bar where he met up with Slye.

He said they were then questioned by a private investigator employed on Fay’s behalf. ‘He came to ask what happened. We spoke to him,’ George’s friend said.

Earlier the woman told the jury she’d had consensual sex with Slye, then fell asleep.

She thought she was dreaming and felt ‘confused’ when she discovered London-born Fay – a complete stranger – on top of her.

Fay is pictured with his QC father Michael, who sits as a deputy high court judge in the Caribbean and is now based in the British Virgin Islands 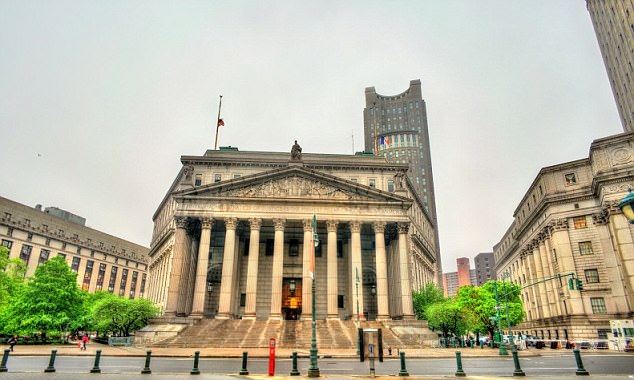 The case was heard in front of a jury at New York Supreme Court, pictured (stock photo)

Privately educated Fay has pleaded not guilty to three counts of rape, sex abuse, and committing a criminal sexual act while the woman was ‘physically incapable’ of giving consent.

His QC father Michael, who sits as a deputy high court judge in the Caribbean and is now based in the British Virgin Islands, is expected to give evidence on his son’s behalf as the trial progresses.

Fay’s mother Sofia, a partner in a ritzy public relations company, sat at the back of the court.

The wealthy couple maintains homes in the Virgin Islands, the Channel Islands, and America. Mr. Fay is an honourary member of London’s Radcliffe Chambers.

While cross-examining George’s friend, Fay’s defense lawyer Daniel Bibb asked him a series of questions about exactly what Fay said to him after waking him up.

‘He said something to you that he was in the bed, like ‘I went to sleep.’ George said he was asleep in his bed,’ Bibb said.

‘He said she started kissing his neck and one thing led to another.

‘He said she gave him a blow job. And essentially she started to freak out?’

George’s friend replied ‘yes,’ to every question, then added he tried to go back to sleep but heard the woman screaming.

‘I remember quite distinctly the girl shouting at George calling him scum,’ George’s friend said.

George’s friend, who did not look at his childhood friend once during his 90 minutes of testimony, said that earlier in the evening Fay had given him a tour of the apartment.

He said the second bedroom, which contained a pair of single bunk beds, was Fay’s room.

Later, after a night of drinking in Manhattan, it was where they discovered their friend Jack Slye and the woman asleep.

The trial is expected to last two weeks.