Scot Suzanne Cassidy was sucked into the propeller blades of a speedboat which had just pulled her through the water on an inflatable doughnut ring.

The 26-year-old nursery worker only survived by grabbing on to the side of the boat and twisting her body round as the razor-sharp blades hacked into her leg.

Lucky escape: Suzanne Cassidy was sucked into the propellers of a pleasure boat in Ibiza. She said she is lucky to be alive

Friends saved her life by pulling her aboard and helping her get to hospital as she started haemorrhaging blood from a wound near her knee which required several stitches. She also suffered a badly broken leg.

She is recovering after an emergency operation at Can Misses Hospital in Ibiza Town.

Her tibia was left sticking out of her right leg in the accident and the broken bone had to be pinned back together.

Suzanne, from Glasgow, only arrived in Ibiza 11 weeks ago to start a summer job in a bar.

She said: ‘I’m just glad to be alive. I really thought I was going to die.

‘I knew immediately the danger I was in when I felt my leg being sucked towards the propellers by the force of the engine.

‘Somehow I found the strength in my upper body to twist myself around and away from danger.

‘My friends pulled me back on board the boat and that’s when I saw the blood.

‘I could feel the throbbing in my leg where it was broken but I was running on adrenaline by that point and I didn’t want to look at it so I only found out the bone had been sticking out of my leg after I came to from the operation.

‘It was a four-and-a-half-hour operation. Friends have asked me how many pins and stitches they’ve put in my leg but I just don’t know.’ 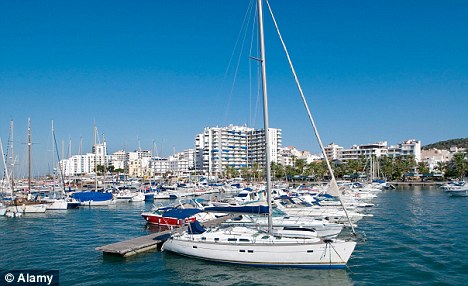 Accident: Suzanne was saved by friends who pulled her aboard the boat in the party resort of San Antonio and got her to hospital quickly

The accident happened around 4pm on Sunday in a pretty cove near the party resort of San Antonio called Cala Conta.

Suzanne had jumped into the water to swim to a bigger boat anchored nearby after being dragged through the sea in an inflatable ring with friends.

She said: ‘We’d gone out as part of celebrations for a friend’s 30th birthday party with other pals and my boss at the bar I’m working at.

‘Five of us had just finished our turn on the ring and we were doing a changeover with other friends who were waiting in the bigger boat so they could go out for their turn.

‘It all happened so quickly. I don’t know if our boat moved or I jumped into the sea too near the engine but I don’t remember hearing any warning.

‘I’ve been told I’ll be in hospital for another four or five days and I won’t be able to fly for a while.

‘I’ll probably head back to Scotland at the end of September when I was due to fly back anyway.

‘The doctors have told me I’ll walk again without a limp. And I love dancing so with time I’ll be looking forward to dancing again.”

Local Civil Guard officers have launched an investigation into the incident.

The owners of the boat involved in the accident were not available for comment. 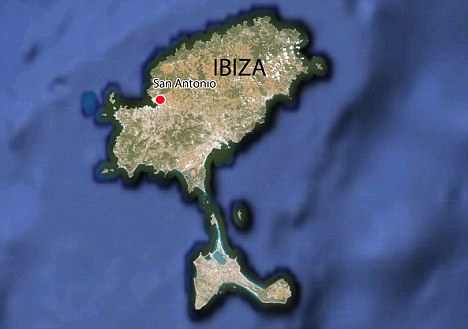 Suzanne, who is working in Ibiza for the summer, was enjoying birthday celebrations on the island when the accident happened