The Prime Minister Boris Johnson’s fiancée Carrie Symonds joined the millions across the country to pay tribute to the thousands of NHS staff and healthcare workers putting their lives at risk to help fight the spread of the coronavirus tonight.

The leader’s partner, who gave birth to their son Wilfred earlier this month, joined in with the Clap for Carers event which is now in its eighth week and sees millions of Britons across the nations stand outside their homes in solidarity with the essential workers helping fight Covid-19.

The nationwide campaign, which sees members of the public, politicians, celebrities and the emergency services applaud the key workers at 8pm every Thursday, comes as Public Health England approved its first commercial antibody test which tells people whether they have had the virus in the past.

Ms Symonds beamed with joy as she stood next to her partner outside Downing Street tonight and led the outpouring of support for the essential workers helping fight the pandemic.

Meanwhile the Labour leader Sir Keir Starmer and his wife joined their neighbours in the street in a live clap on television.

Ahead of tonight’s poignant event, people across the UK showed their support for NHS workers by painting their roads with rainbows and messages of support to the NHS. 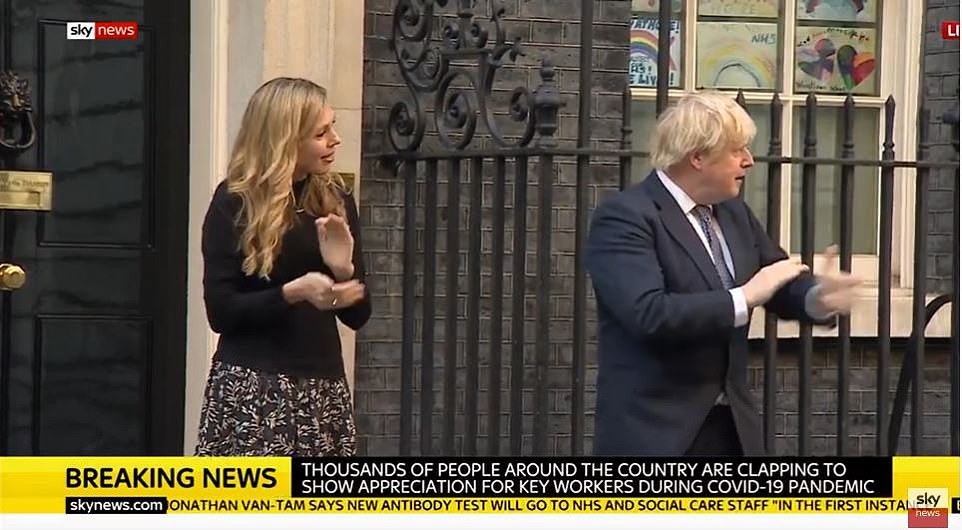 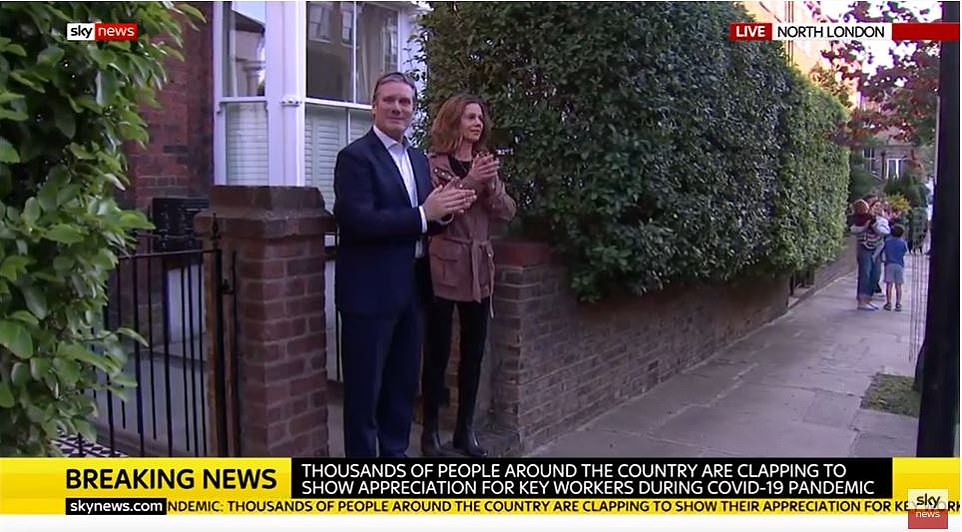 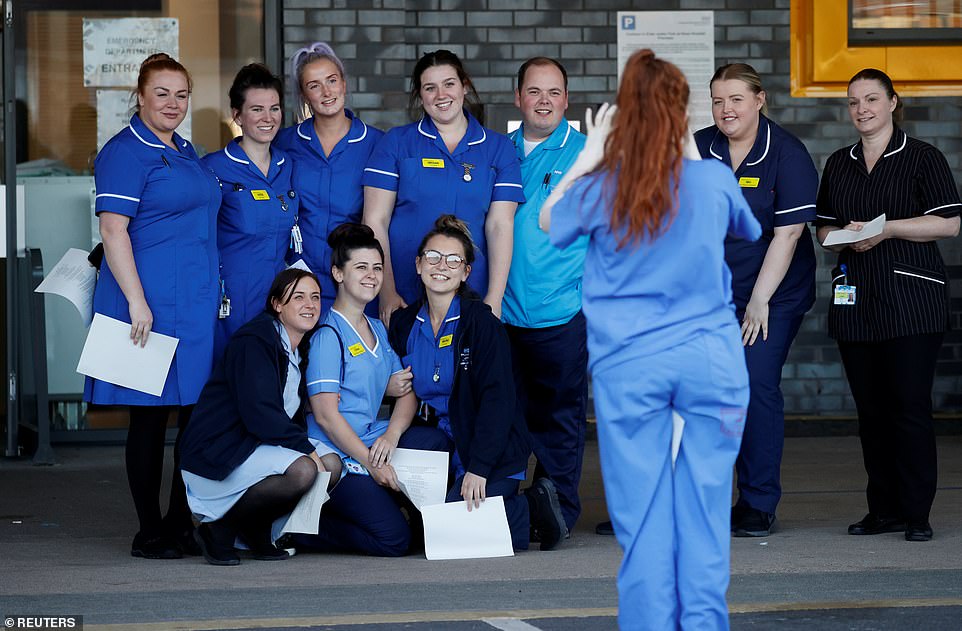 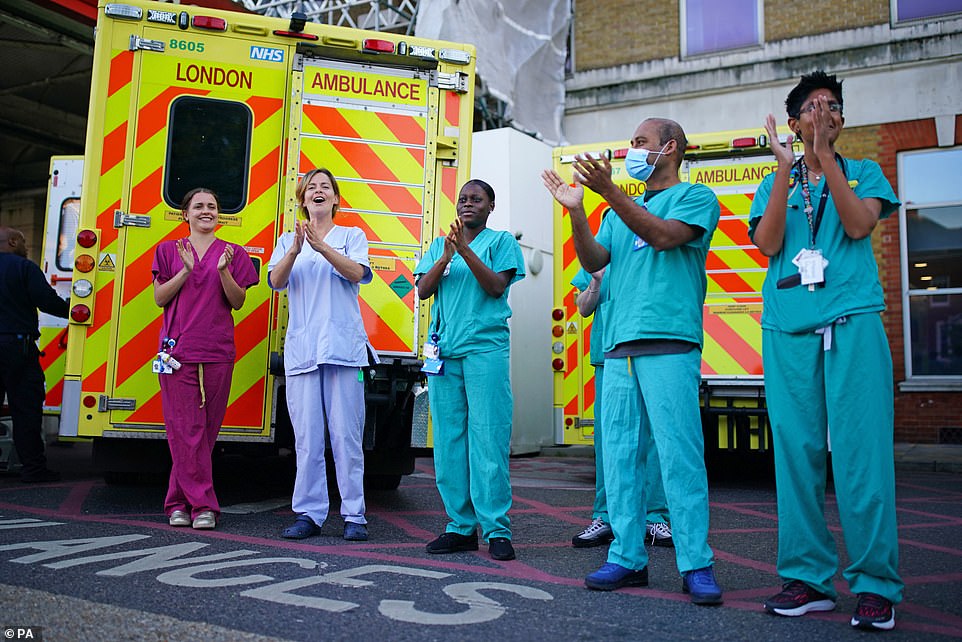 NHS staff outside King’s College Hospital in Camberwell, south London, join in the applause in their uniforms to salute local heroes who are working to tackle the coronavirus pandemic 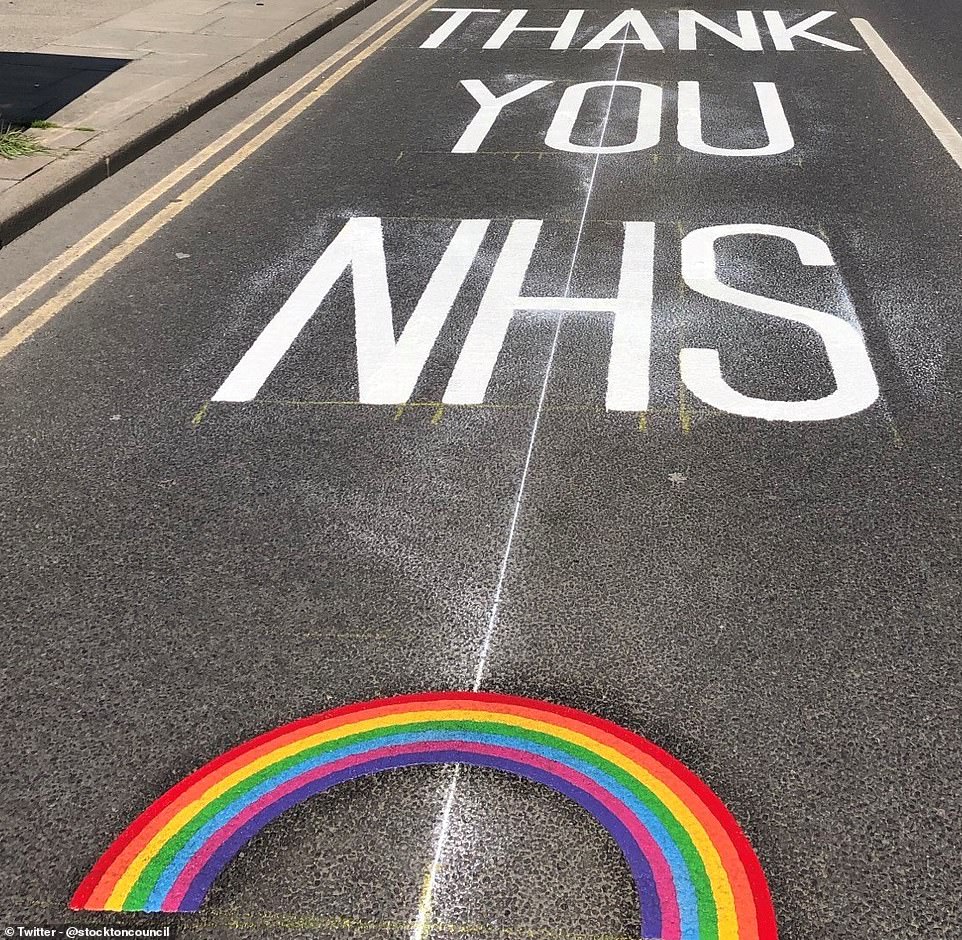 Key workers from Care Call, a 24-hour telemonitoring and response service for older and vulnerable people, pictured beside the Thank You Key Workers road markings in Stockport 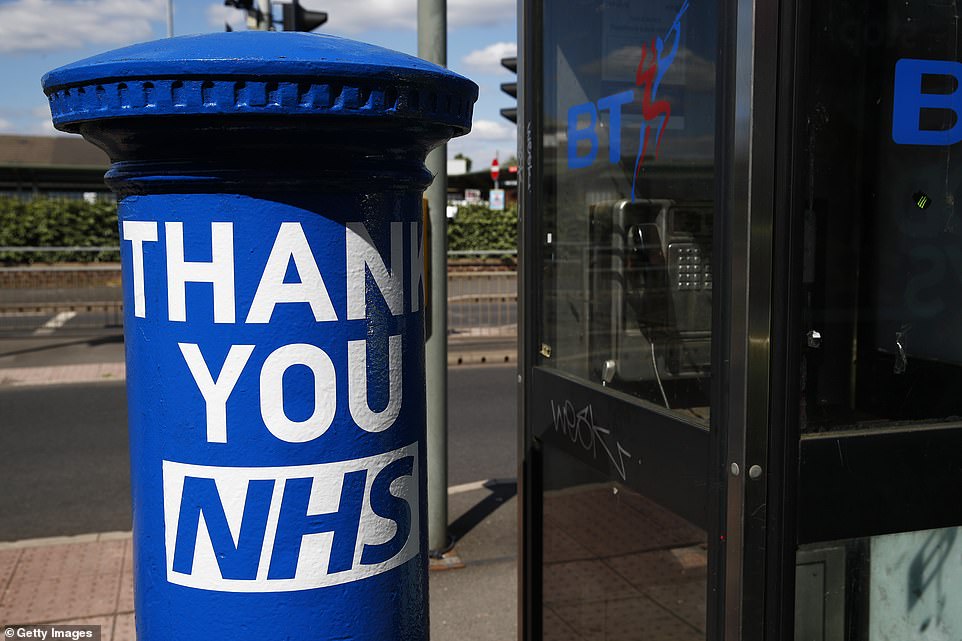 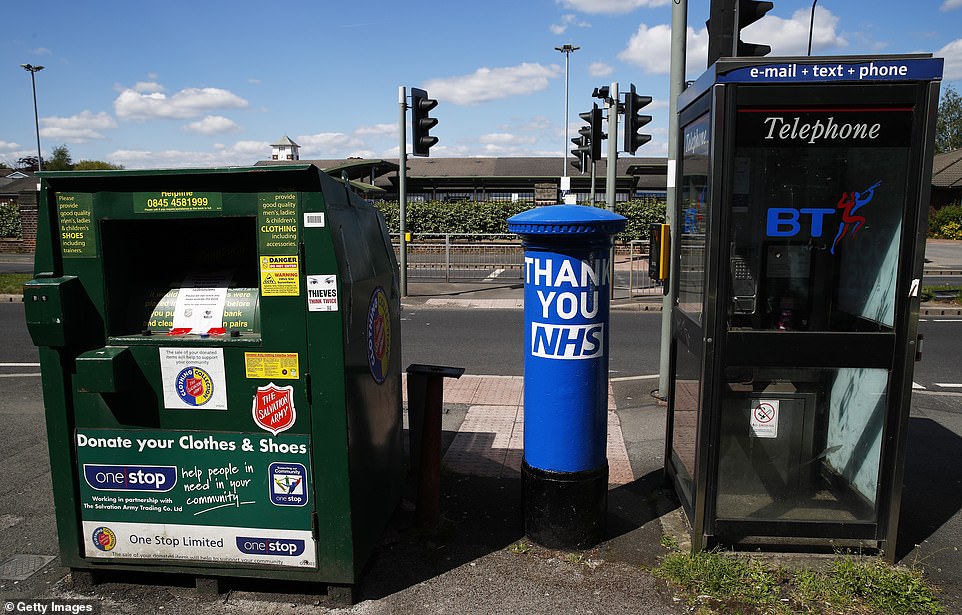 In Stockport, key workers from Care Call, a 24-hour telemonitoring and response service for older and vulnerable people, posed next to a ‘Thank You Key Workers’ road marking.

Meanwhile outside University Hospital in North Tees, colourful rainbow signs were painted onto the road just in time for tonight’s clap for carers

In Manchester a specially decorated postbox emblazoned with the words ‘Thank You NHS’ was spotted outside Trafford General Hospital.

The box joined one of five specially decorated post boxes that have been created by the Royal Mail in an effort to pay tribute to the NHS workers for their selfless work during the pandemic.

When the clock struck 8pm, Britons banged pots and pans, sang, chanted and dressed up to say thank you to those caring for patients in hospitals, care homes and the community.

Meanwhile emergency services vehicles blared their sirens and flashed their blue lights as they paid tribute to their colleagues. 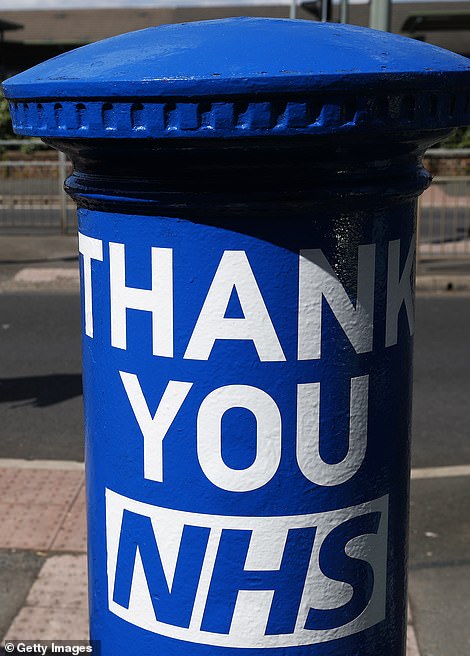 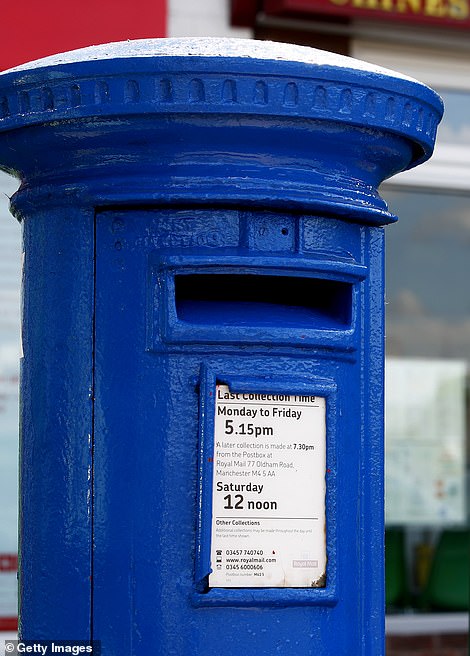 The blue postbox, which is one of five created by Royal Mail, stood in Manchester ahead of tonight’s ‘clap for carer’s with the message: ‘Thank you NHS’ 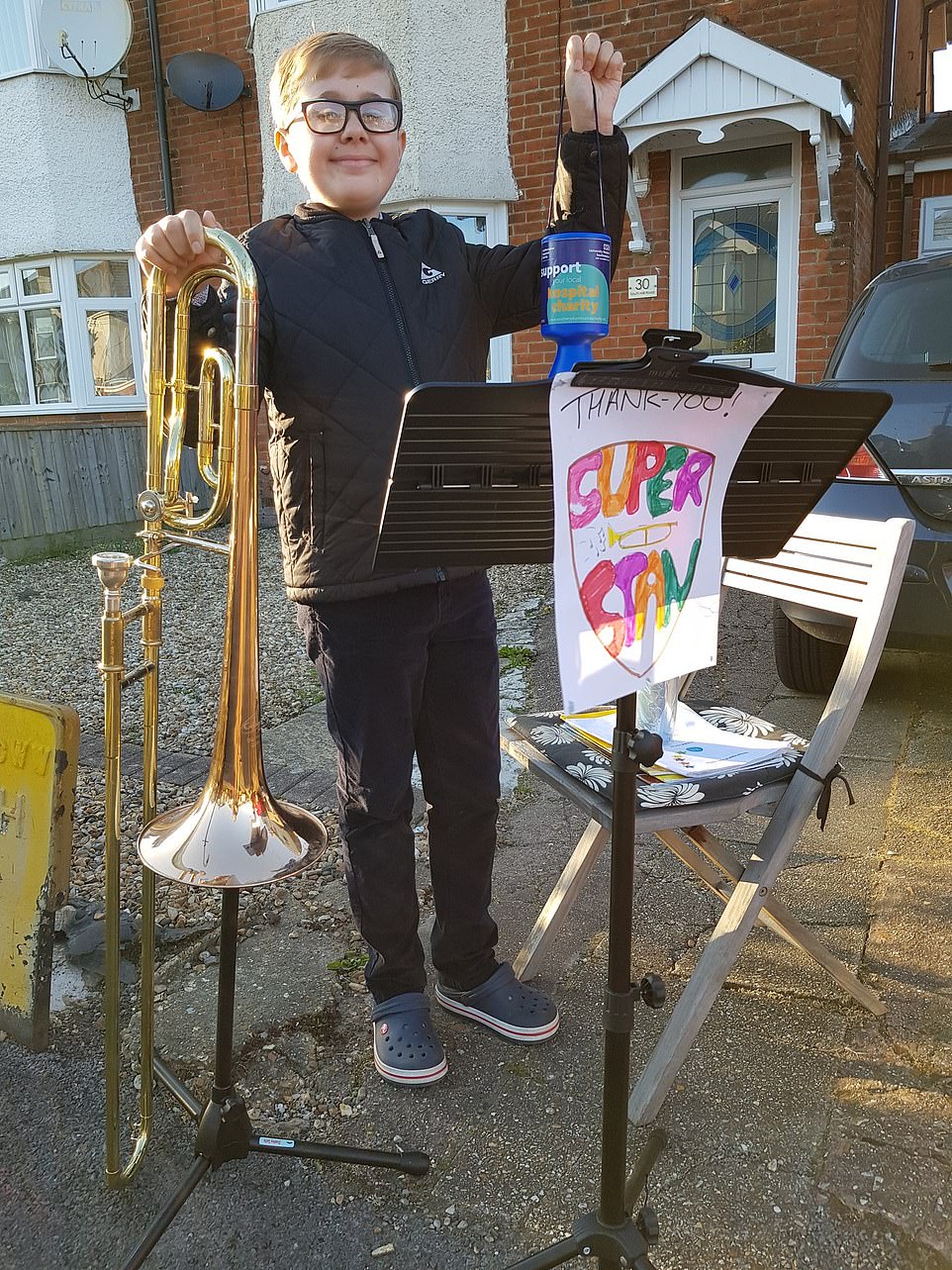 Stanley has been putting on street concerts with his trombone to show his appreciation for the NHS. He had a collection pot this evening and plans to donate all the proceeds to Southampton Hospital Charity 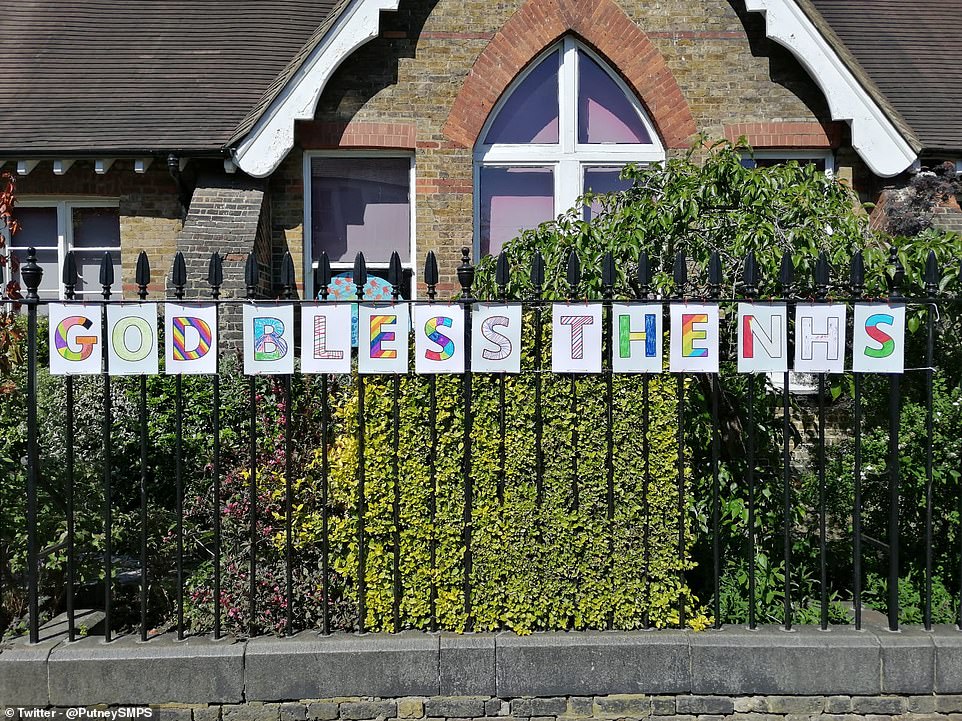 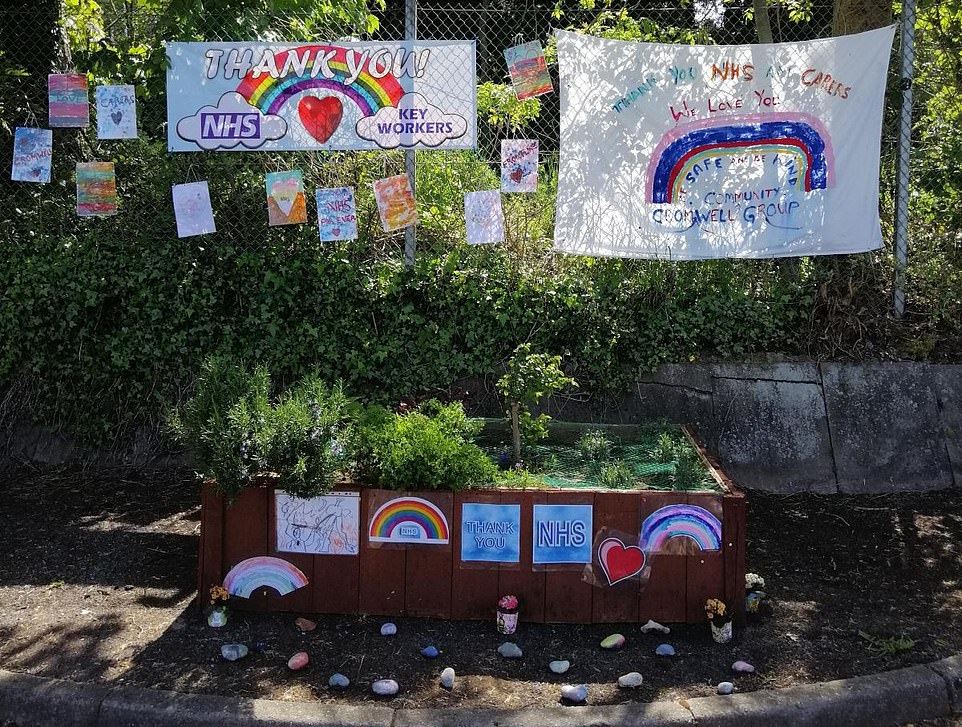 Raven Housing Trust, based in Redhill, Surrey, show their appreciation of the NHS and key workers and encourage people to join the round of applause at 8pm tonight 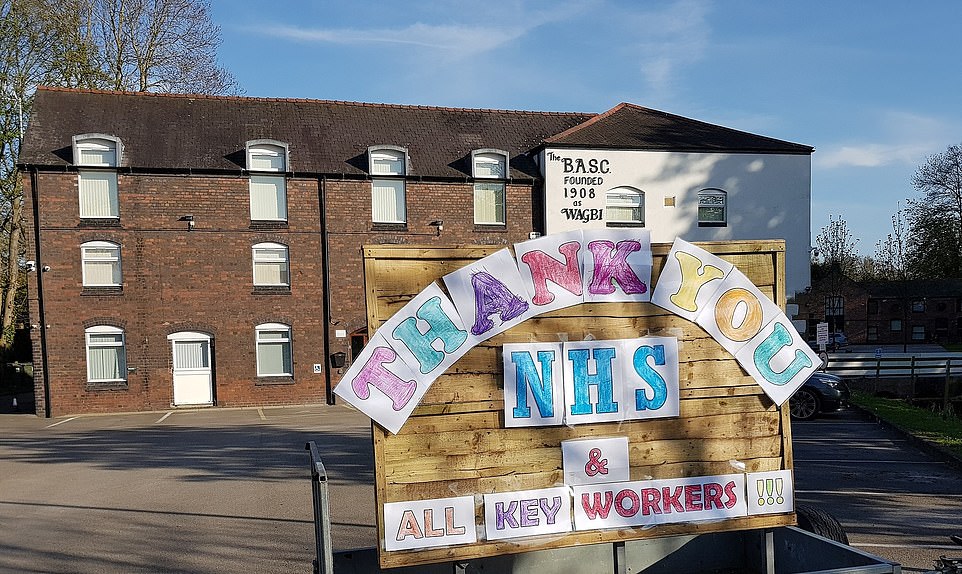 The youngest members of The British Association for Shooting and Conservation create a colourful display to show their appreciation for the NHS at Marford Mill in Wrexham, Wales

Buildings were lit up with messages of solidarity and gratitude, with several skyscrapers and other famous landmarks in London specially illuminated for the occasion.

The nationwide campaign was started by a Dutch woman from London called AnneMarie Plas, who went viral with her plea to clap for healthcare workers after seeing it take place in her home country and others around Europe.

Last week, an emotional Boris Johnson led the outpouring of support across the the country in the ‘clap for carers’ as he stood on the steps of Downing Street.

He tweeted a video of himself applauding, saying: ‘Thank you to all of our carers for your fantastic work, day in, day out. You are pillars of society in the fight against coronavirus.’

The prime minister’s partner Carrie Symonds, who gave birth to their son Wilfred this month, also joined in the applause, posting on Twitter: ‘Spotted this flower rainbow leaving UCLH with Wilfred last week. Clapping again for our fantastic carers tonight.’

The moving scenes come as Britain’s daily COVID-19 death toll dropped again today as the outbreak continues to slow, as officials announced 428 more victims – the lowest jump on a Thursday since the end of March.

Official figures released by the Department of Health show 33,614 coronavirus patients have now died across all settings in the UK, including hospitals and care homes, since the crisis began.

Do you have pictures/video of clap for carers in your area? Email them to lydia.catling@mailonline.co.uk