Britons are now more likely to die from some types of cancer than they were 15 years ago because of the coronavirus pandemic, shock research has suggested.

Academics modelled what effect the disruption of cancer services will have by 2025 and found around 3,500 patients with four of the most common forms of the disease — breast, lung, bowel and oesophageal — could have their lives cut short.

Death rates from bowel cancer are estimated to soar by up to 17 per cent because of delayed diagnoses. This would cause the five-year survival rate to drop to 51.5 per cent — similar to levels seen in 2003, it was calculated.

London School for Hygiene and Tropical Medicine scientists also revealed survival outcomes for breast and oesophageal cancer may drop to levels seen in 2005 and 2006, respectively.

A separate study yesterday warned thousands of Britons could die early from cancer because the number of urgent hospital referrals for suspected cases plunged by 43 per cent during lockdown.

Catching tumours in their earliest stage before they are able to spread around the body is critical to survival.

It comes as a 27-year-old mother died after her persistent cough was mistaken by doctors as being down to coronavirus — not her breast cancer which had returned for a third time.

Beth Pattison, from Chester-le-Street in Durham, rang her GP in March but was told her cough was merely down to Covid-19. She died on June 27, just three weeks after medics realised her disease had come back and spread.

It comes as Beth Pattison, 27, (pictured with her son Finn) died after her persistent cough was mistaken by doctors as being down to coronavirus — not her breast cancer which had returned for a third time 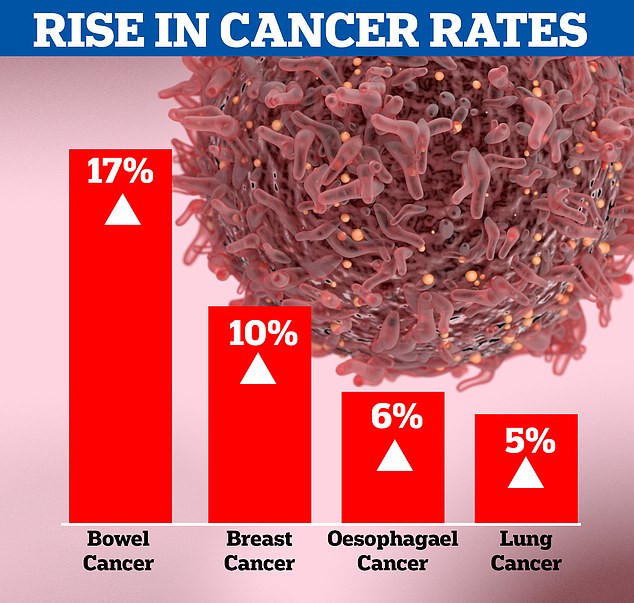 Death rates from bowel cancer are estimated to soar by up to 17 per cent because of delayed diagnoses. This would cause the five-year survival rate to drop to 51.5 per cent — similar to levels seen in 2003, according to the study

HOW COULD CANCER SURVIVAL RATES BE AFFECTED BY COVID-19?

The team estimated breast cancer deaths to soar by between 8 and 10 per cent — the equivalent of 281 and 344 more lives.

The team estimated breast cancer deaths to soar by around 6 per cent — the equivalent of 330 to 342 more lives.

The team estimated breast cancer deaths to soar by around 5 per cent — the equivalent of 1,235 to 1,372 more lives.

During the UK’s epidemic, cancer screening and routine referrals were suspended in a bid to protect the NHS from being overwhelmed.

The Covid-19 crisis has also made people hesitant to use healthcare, causing a huge drop-off in symptomatic cancer patients seeing their GP.

Data shows 339,000 urgent cancer referrals were made by GPs in England between April and June — down from 594,000 in the same period last year.

The research, published in Lancet Oncology, drew on NHS cancer registration and hospital data of more than 93,000 patients diagnosed in 2010-2012.

They used this data to estimate the effect of delays in diagnosis on cancer survival for four main types of the disease.

The model, which the researchers described as conservative, assumed the current drop off in referrals will continue for the next year.

NHS hospitals must adhere to strict social distancing measures and services as they try to get back up and running.

And they modelled that breast cancer could claim 281 and 344 more lives, roughly an 8 to 10 per cent increase.

The researchers did not say what this would mean for the five-year survival rates in the study. The Sun newspaper is believed to have made the calculations.

However, the five-year survival rate for bowel cancer before the pandemic was around 61.4 per cent, the experts said.

Professor Richard Sullivan, one of the researchers, fears it will take two years before the NHS gets cancer services back to normal.

He told The Sun: ‘The impact is likely to be far worse than any of our estimates as we’re only looking at diagnostic delay, not changes to treatment or admissions.

‘Nobody considered the indirect effects of a massive lockdown, where you’re basically saying to patients “stay at home”.

‘The bio-fear, which continues, is still having an effect on patients not presenting to their GPs.’

Professor Sullivan, of King’s College London, added: ‘The risk of dying from cancer is much more serious than Covid, so if you do have symptoms come forward.’

The researchers urged the Government to launch a public health blitz urging Britons with suspected symptoms to seek treatment.

They also called on the NHS to ramp up its diagnostic capacity to clear the backlog of people waiting for vital tests and treatments. 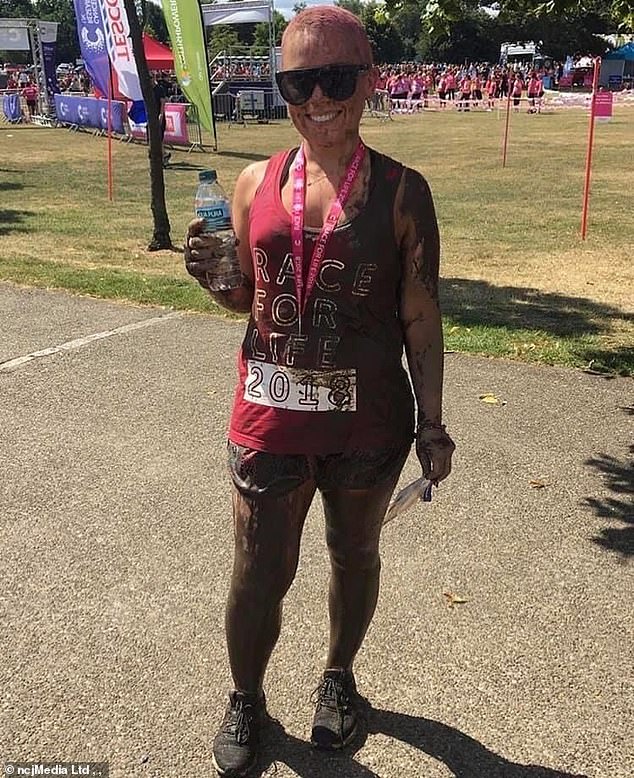 Miss Pattison, from Durham, rang her GP in March but was told her cough was merely down to Covid-19. She died on June 27, just three weeks after medics realised her disease had come back and spread. Pictured after completing a ‘muddy run’ to raise money for charity 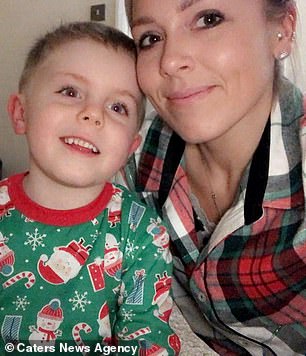 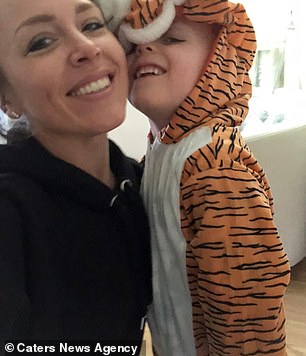 Doctors diagnosed Miss Pattison, mother to five-year-old Finn (pictured together), with pneumonia and gave her antibiotics after she tested negative for the coronavirus 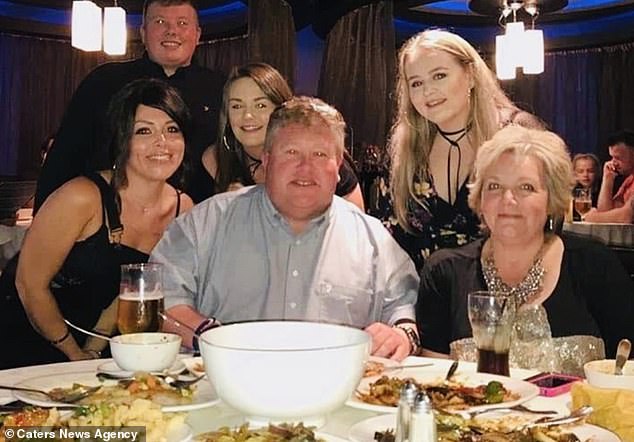 Thousands of people could die of cancer after the number of urgent hospital referrals plunged by 43 per cent during lockdown.

As fewer patients see their GPs with cancer symptoms – before being referred to specialists for scans – the disease is being picked up too late, experts fear.

There are also delays in accessing the necessary treatments and diagnoses once a patient goes to hospital, a study by healthcare management consultancy Carnall Farrar and the Institute for Public Policy Research (IPPR) found.

Researchers believe the lockdown numbers could have a detrimental effect on the country’s cancer survival rate while setting Britain’s progress in getting a grip on the disease back by ten years.

They have urged the NHS to ‘build back better’ as cancer services begin to reach their full capacity again.

The survival rate for colorectal cancer for the same period has dropped from 58.4 per cent to 56.1 per cent – the same rate it stood at in 2010.

Cancer charities said the results are ‘stark’ and show the effect of cancer services being ‘derailed’ during the coronavirus crisis, The Sunday Times reports.

Simon Stevens, head of NHS England, has already urged all hospitals trusts to get cancer services back up-and-running.

Two NHS Nightingale hospitals have been converted into cancer testing centres in a bid to cope with the backlog of thousands of suspected cases.

Leading charities estimate 2.5million cancer patients have missed out on vital tests and treatment this year because of the coronavirus crisis.

Charities have also warned there could be an extra 18,000 cancer deaths in 2020 because of the number of patients who have been diagnosed too late.

There are around 165,000 cancer deaths in the UK every year, according to Cancer Research.org.

Miss Pattison died of breast cancer less three months after she came down with her cough — a tell-tale sign of Covid-19.

Her symptoms got progressively worse and she was eventually taken to A&E by her father Craig in May because she was struggling to breathe.

Doctors diagnosed Miss Pattison, mother to five-year-old Finn, with pneumonia and gave her antibiotics after she tested negative for the coronavirus.

But the 27-year-old’s cancer was only spotted on June 8, after she was blue-lighted to the hospital when her condition worsened further.

Doctors discovered her cancer had returned and spread to her ovaries. A cough and difficulty breathing are two signs the disease has spread.

She died on 27 June in Newcastle’s Freeman Hospital after suffering a cardiac arrest while medics tried to place her in an induced coma.

Her father Craig said: ‘We are heartbroken. The support we’ve had from friends, family and the whole town has helped us.

‘We will never be able to bring Beth back but we hope we can raise some awareness of what happened to Beth and how this could have been avoided.

‘We’ll never know if something could have been different. Would they have done something about it?

‘If they had gave her chemo in March, she might have been strong enough to have another course of chemo to fight it.’

He added: ‘They weren’t looking for anything else, they were focused on Covid and pneumonia.’

Miss Pattison was first diagnosed with breast cancer in 2016 and had a mastectomy and courses of chemotherapy and radiotherapy.

She was then diagnosed for a second time a year later in 2017 where she received further chemotherapy but managed to beat the cancer.