Britons spend most hours at work a week in Europe

Britons work more hours than anyone else in Europe, according to the EU’s own figures.

The only other major economy where people spent more than 40 hours a week in the office on average was Germany, the study found.

But Germans still lag nearly two hours short of the time put in by employees in the UK.

Britons spend an average of 42 hours and 18 minutes a week at work, compared to 40 hours and 24 minutes in Germany, and just 39 hours in France.

The analysis from the EU’s statistics arm Eurostat found British workers have maintained their hours over the years since the recession struck in 2008, against a decline in working time in others among the big European economies.

Britons spend an average of 42 hours and 18 minutes a week at work, which is more than anyone else in Europe

French employees in 2016, the year in which the latest figures were gathered, worked 24 minutes fewer a week on average than they did in 2010.

And the Spanish working week has dropped by 42 minutes since 2008 as the economy has been devastated by recession, debt and high unemployment.

The country with the shortest working week is Denmark, where full-time employees put in only 37 hours and 48 minutes.

The longer working hours in Britain may point to cultural and economic differences from other EU nations. French workers have been bound by legislation limiting the official working week to 35 hours since the 1990s, and despite attempts at reform, the rules command wide support.

By contrast, the EU Working Time Directive of 1993 that says no-one should work more than 48 hours a week has always been politically contentious in the UK. 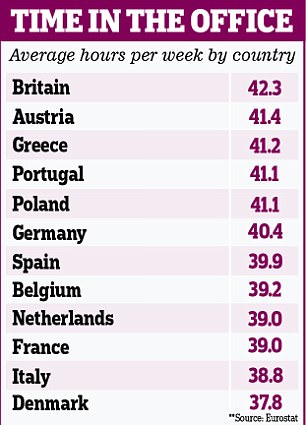 The shortest working week was in Denmark where they average just 37.8 hours a week. Despite working longer hours, there are still concerns of low productivity in Britain

And there are still concerns of low productivity in this country – a factor which means that although British workers put in more hours they are less efficient and profitable than employees in other major economies.

‘Men have a longer working week than women, working on average 41.0 hours compared with 39.3 hours for women.

‘Those in the mining and quarrying industry work the longest hours, 42.0, while the shortest working week is to be found in the education sector at 38.1.’

Economist Ruth Lea of the Arbuthnot Banking Group said: ‘Britain has a very flexible labour market, with a very good record of finding ways for people to work-part time. The hours that people work are almost entirely voluntary, and for the most part people do the hours they want to.’