Britons will spend over £1.5MILLION during their life

The cost of living in Britain over a person’s lifetime is over £1.5million, new findings have claimed, as the nation feels the squeeze amid soaring energy costs and dismal interest rates on cash savings.

Buying a home, raising children and recreational activities like eating out and going to the pub are among the costliest aspects of a person’s life, according to the figures from Atom Bank.

The cost of life calculation is based on the average UK life expectancy of 80.7 years, suggesting that people spend around £1,543,834 over a lifetime.

It’ll cost you: Raising children and celebrating Christmas can be very costly over a lifetime 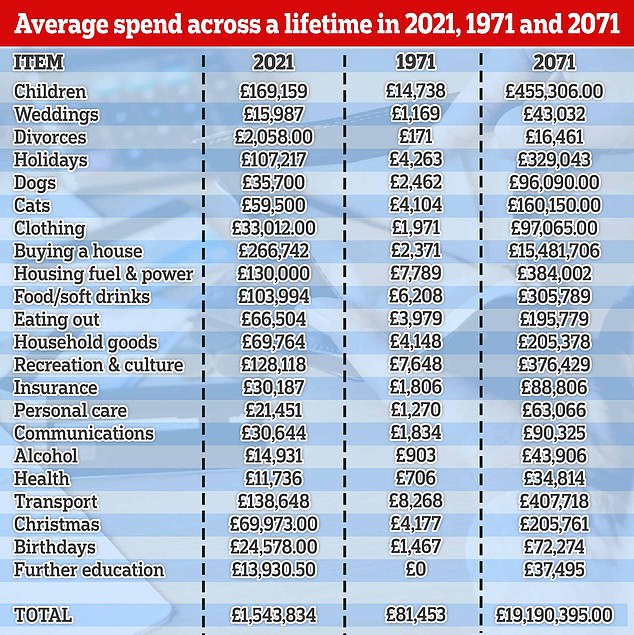 Of course, no one’s life is the same and there are many variables and individual factors that will determine someone’s expenditure throughout their lifetime.

The findings from Atom Bank suggest that back in 1971 the cost of buying a home was around the £2,371 mark, while this year people living in Britain can expect to spend £266,742 on a property.

Latest figures for the year to September from the Office for National Statistics revealed that average property prices across the country increased by 11.8 per cent to reach a record high of £270,000, which is £28,000 higher than this time last year.

While eating and drinking at home costs Britons about £103,994 in a lifetime at present, eating out and taking trips to the pub for a pint adds another £81,435, the findings suggest.

Spending on recreational activities like concerts, going to the theatre, day trips and heading to the cinema can also seriously mount up, costing £128,118 on average over a person’s lifetime, Atom Bank suggests. 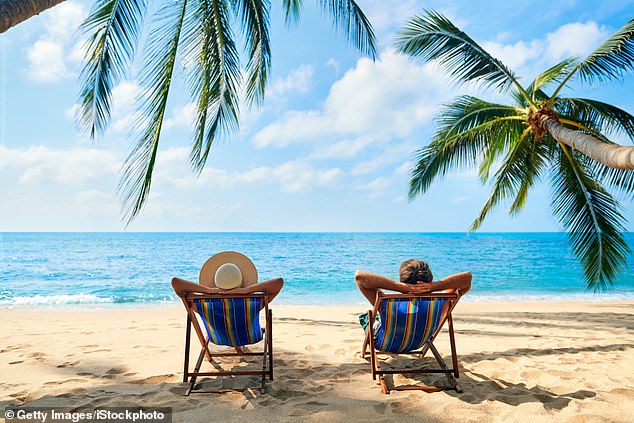 How much? Holidays over a lifetime can end up costing in excess of £107k in total, Atom Bank said

Unsurprisingly, raising children has also become increasingly expensive over the years, and  over a lifetime now costs around £169,159. In many cases, however, this sum can be substantially more, particularly if private education costs are factored in.

The cost of getting around is another notoriously expensive facet of life in Britain, with Atom Bank claiming people will fork out around £138,648 on transport in their lifetime.

Motoring groups have demanded that fuel retailers cut the price of petrol and diesel this week, as $10 has been shaved from the cost of oil in recent days.

RAC Fuel Watch data shows the price of oil fell by $10 a barrel to $73.18 on Friday as concerns over demand grew following the news of the outbreak of the Omicron Covid variant.

The falling cost of oil, on top of already lower wholesale prices of petrol and diesel for over a week, means unleaded is currently 12p-a-litre more expensive than it should be while diesel is 10p too high, according to RAC Fuel Watch figures.

Running a home is also very costly, with Atom Bank estimating that fuel bills  currently end up costing around £130,000 over a person’s lifetime.

While a luxury for many, the cost of holidays can also seriously stack up over a person’s lifetime, and end up costing in excess £107,217 in total, Atom Bank said. By 2071, it believes Britons could be spending around £329,043 on holidays.

Christmas and birthday costs also mount up, and currently run at around £94,551 in a person’s lifetime, the figures claim.

People with cats and dogs could also find their finances strained over time, as owning these pets over a lifetime can cost in excess of £95,000 in total.

While the happiest day of many people’s lives, weddings can be extremely expensive, and typically cost nearly £16,000 per person, Atom Bank said.

It also noted that 42 per cent of marriages end in separation, with divorces typically costing over £2,000 over a person’s lifetime. Of course, for some, divorce settlements will prove considerably more costly.

The cost of living has surged at its fastest pace in a decade, hitting 4.2 per cent in the year to October.

The upturn has been driven by higher fuel and energy prices, but the cost of second-hand cars and eating out also rose, the Office for National Statistics said earlier this month.

October’s reading was considerably higher than the 3.1 per cent rise recorded in the year to September, and more than double the Bank’s target of 2 per cent. Speculation has been mounting regarding when the Bank of England will lift interest rates from their record low level of 0.1 per cent.

Six tips to help mitigate the cost of living 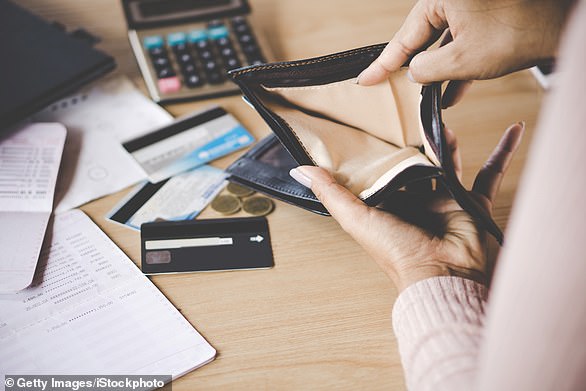 Here, Clare Framrose, head of savings at Atom Bank, gives her six top tips to help you mitigate the soaring cost of living:

1. Get creative with how you spend and save

In general, we’re more likely to stick to habits that challenge and excite us and it’s no different when it comes to saving.

To keep things exciting, try taking on a different savings challenge each year.

A good one to start with is the rounding the change challenge, where you round up all your purchases to the nearest 50p or £1 and save the difference – it all adds up!

2. Shop around for the best deals

Like the rainy British summer and the rising cost of beer, inflation is inevitable, but that doesn’t mean that there aren’t ways to alleviate the pain of ever rising prices.

Finding a bank that offers you a competitive interest rate can gain you more money without you having to work for it. And the more interest you earn, the more you can reinvest. It’s a perpetual net gainer for your money and a safe investment for the savvy saver.

Additionally, whether it’s for your broadband or your gym membership, shop around for the best deals; renegotiate your contracts at the end of leases and don’t let your memberships roll over without having a good look at what’s out there. There’s always a better deal and always room to negotiate.

An invaluable tool that costs you virtually nothing, becoming financially literate is a great way for you to educate yourself on the intricacies of your money. From taxes to budgeting, a firm knowledge of where your money is going alongside knowing how to properly plan can ensure you know that your money is being spent well.

Depending on how you learn, there are blogs, websites, online courses and podcasts on financial planning that offer invaluable guidance on how to educate yourself. And best of all, a lot of it is free.

4. Build up a strong credit score

A decent credit score can grant you access to lower interest rates and can even help you forgo a deposit for some contracts.

Make sure you pay your bills on time and pay off contracts regularly and your credit score will soar, meaning you’ll be rewarded with better options on borrowing on everything from your mortgage, to your car, all of which will save you a pretty hefty sum over a lifetime.

5. Make the most of Government schemes

There are a number of Government-backed schemes that can help your savings go further.

With buying a house coming out as the top contributor to the cost of life, make the most of help to buy schemes and lifetime ISAs to boost your savings.

Schemes such as the Help to Buy: Equity Loan scheme where the Government lends homebuyers up to 20 per cent of the cost of a newly built home can significantly lower your overall spend on housing.

While it is important to be frugal and financially savvy, that doesn’t mean you should sacrifice the enjoyment of your life now in an effort to solely save for the future.

Often, an awareness of your spending habits and the ability to not chastise yourself over every purchase can lead to a lifestyle that is both financially and mentally sustainable.