He lives in a house, a very big house, in the Cotswolds. A charming country pile restored with love and funded mostly by Britpop. ‘A little bit of me used to die every time I heard the word Britpop,’ says Alex James, Blur bass player, world-famous cheesemaker and reformed rake about town. ‘But I feel much better about it now than I did.’ James was the lanky fop who sported a cheeky Oasis T-shirt on Top Of The Pops in 1995, at the conclusion of Blur’s Britpop contretemps with the Gallagher brothers, to celebrate Country House having beaten Roll With It to the coveted No 1 spot.

Alex James isn’t sure he’d have the discipline required to be a pop star now. ‘If you want to be in a band these days you’ve got to get up very early and behave yourself,’ he says

A lifetime later, James chugs a mug of coffee in the kitchen of his Oxfordshire farm and reveals that there is a refreshing reason for this bubbly new outlook. ‘I’ve trademarked the name and I’m launching a British sparkling wine – Britpop,’ he beams.

As a globally successful musician, award-winning cheese producer and the host of The Big Feastival, a music, food and child-friendly festival for 25,000 groovy grub lovers and their kids, held annually on James’s 200-acre farm near Chipping Norton, he has the know-how and marketing muscle to see Britpop, the beverage, come to fruition. ‘Hopefully we’ll have something in time for the August bank holiday weekend,’ he chuckles.

Loved by more than 15 million album-owning Blur fans, James has always been more than just a pretty face. ‘I remember the first time Blur went to America, I was feeling really pleased with myself,’ he recalls. ‘I got into a lift and this woman was staring at me. She said, “Are you a model?” I said, “No, I’m a rock star.”’

And rock stardom has served James well. He’s estimated to be worth more than £18m, and plays the role of bedraggled lord of the manor to a T. Adjacent to his 18th-century homestead, in a converted barn that has become the cheese farm’s nerve centre, James is playing a parlour game: if chefs were rock stars. It’s a simple premise based on an observation he made five years ago that chefs are the new rock stars.

The bassist begins with his new pal (‘we’re having a bit of a bromance’), the mercurial cook Marco Pierre White. ‘Marco is Elvis,’ James states. ‘No question. He’s the daddy of it all. Everything about modern British cooking started with him – just like it all changed after Elvis.’

Gordon Ramsay, he says, is John Lydon, formerly Johnny Rotten: great in his time, gratuitously profane and terrible hair. He can’t decide if Raymond Blanc is suave singer Bryan Ferry, before declaring him to be ‘all of Roxy Music – the whole band!’ But who is the musical equivalent of the driven, bullish, slightly mockney Jamie Oliver?

James’s brow furrows beneath his heavy fringe. Could it be Blur’s Damon Albarn? ‘Of course, he is, totally,’ says James, clapping his hands. ‘One hundred per cent Damon.’

It was Jamie Oliver who sparked the initial idea of The Big Feastival. ‘He said, “Mate, why don’t we have a mini festival with brilliant bands and proper food in your garden?” says James. ‘And here we are in our seventh year.’ Although Oliver is no longer involved, they remain friends: ‘Last year he wasn’t really billed, but he came and DJ’d.’

Musicians and chefs get equal billing at The Big Feastival. You’re as likely to see a crowd singing along to Saturday night’s headliner Craig David, before chilling on Sunday, as you are to witness 10,000 people cheering Pierre Koffmann flamboyantly sautéeing some walnuts. With almost 700 festivals taking place in the UK each year, James has been shrewd in finding a gap in an overcrowded market. ‘Food, music and family are the things I get really excited about,’ he says. ‘I’ve got five kids, six cheeses and seven albums.’

Festival survival, he counsels, ‘is all about the three Ws: wellies, wet wipes and whisky’. Yet Feastival is very much a family affair. James’s wife of 15 years, Claire Neate, and his five children, who range in age from 14 to seven, all muck in. Everyone, he proclaims, is welcome, from Jeremy Corbyn to Donald Trump – ‘Although I’d have to step up the security in the Cheese Hub,’ he frowns.

James is unfazed by celebrity festival-goers. His Chipping Norton neighbours Jeremy Clarkson and David Cameron, with whom he was photographed at his 2011 Harvest Festival, a forerunner to Feastival, may even show.

Having Marco Pierre White around has taken its toll on the waistline. But I’ll have a bikini body by August

He says he’s seen Cameron’s £25,000 painted shepherd’s hut, where the former Prime Minister is currently penning his memoirs. He was envious but also inspired by the writing cabin. ‘I’m now building a stretch shepherd’s hut,’ James fumes competitively. ‘A really distastefully bling one.’

Will his sheep-shack buddy be attending The Big Feastival? ‘I don’t know. I hope so.’

But for the moment, James has weightier matters on his mind – including his own weight. ‘Tasting all this cheese and having Marco around to cook has taken its toll on the waistline. But I’ll have a bikini body by August.’

James has taken up running and he gave up smoking earlier this year. ‘In the end I just thought, pffft,’ he exhales, and stubs out an imaginary cigarette.

James, who still drinks ‘now and then’, will celebrate his 50th this year, but there was a time when you suspected that he might not reach his half century. ‘Even before I was in Blur I thought, There’s no point living past 30,’ he says. ‘But it’s great to discover that life does keep getting better. Having a family is different to tearing around the Cannes Film Festival in a speedboat with Ewan McGregor, but it’s nice. Those days were great, but life moves on.’

He hints that he might be reconvening his musical side project, Fat Les, whose members include Keith Allen and Damien Hirst, in preparation for the World Cup – ‘it’s too good an opportunity to miss’ – but whether there’s any movement in the Blur camp is a mystery, even to members of the band.

They last saw studio action in 2015, for the first time in 12 years, for the outstanding Magic Whip album. The accompanying world tour was a triumph – then silence. ‘I haven’t spoken to Damon for a bit,’ says James. ‘I never know what’s going on with Blur. Every time we get back together I think, “Swimming pool! Brilliant!” But I always end up with another septic tank. I really thought the last album would do it, but no, it’s just another septic tank. Also, it takes me two years to recover from a Blur project.’

Energy concerns aside, James isn’t sure he’d have the discipline required to be a pop star now. ‘If you want to be in a band these days you’ve got to get up very early and behave yourself,’ he says. ‘It’s all gone cabaret, like the pre-rock ’n’ roll times with impresario managers. Pop groups now are good cabaret acts, but if you really just want to marry a supermodel, buy a yacht and tell everyone to f*** off, you want to become a chef.’ 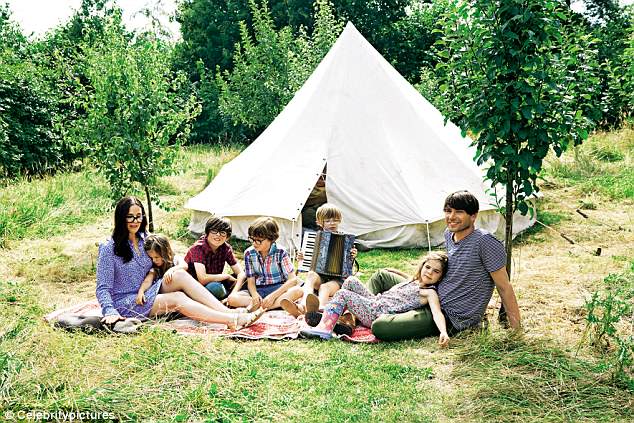 Feastival is very much a family affair. James’s wife of 15 years, Claire Neate, and his five children, who range in age from 14 to seven, all muck in

As the Feastival approaches, the appeal of late nights has diminished. He needs to keep a clear head. ‘It is insane. I’ve got to call CBeebies’ Mr Tumble [Justin Fletcher] later today. He’s great, a complete pro: puts on his red nose, walks on stage, starts to sing One Man Went To Mow, brings the house down.’

James worries that he’ll end up like Glastonbury chief Michael Eavis ‘with no hair and a beard’, but he insists that the Glasto folk have been ‘hugely helpful and supportive to us’.

As we prepare to make tracks, James wonders whether the trials of a gentleman festival organiser might make an interesting reality TV series. ‘It’s got everything, hasn’t it? Michelin stars, decibels, disco balls, thrills and spills, screaming kids, cataclysmic rain… and stinky cheese,’ he says as he pulls on his wellingtons. ‘I’d definitely watch it – if only I had the bloody time to watch television…’