Over the past several days, they have been dogged by rumours that their romance was coming to an imminent end.

But Cheryl and Liam Payne made a step towards putting such speculation to bed on Wednesday, when they arrived at London’s O2 Arena together for the BRIT Awards.

The pair – who are parents to one-year-old Bear – smiled and cuddled each other as they posed for photographers lining the expansive red carpet leading to the venue.

Stepping out together: Cheryl and Liam Payne stepped out together for the BRIT Awards, held at London’s O2 Arena on Wednesday night

Former Girls Aloud singer Cheryl hit the big musical event in style, stepping out in a black minidress, which featured a dramatic layered sleeve on one side.

Standing tall in a pair of black heels – which featured large red rose embellishments – the Fight For This Love singer wore her raven tresses in a sleek ponytail.

With glittering earrings serving as her main accessories, the former X Factor judge highlighted her natural beauty with a rich palette of deep-hued makeup. 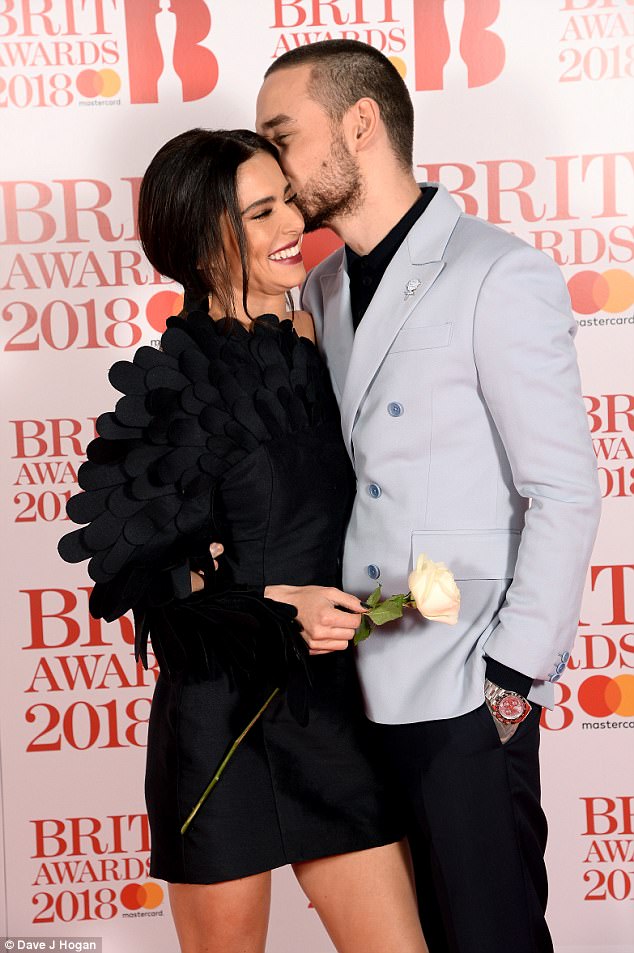 Together: The couple packed on the PDA as they put on a show of solidarity amid split rumours 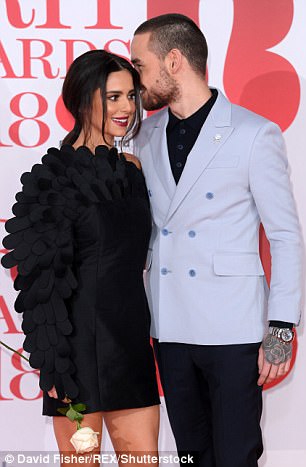 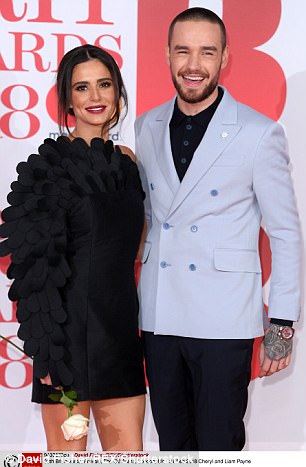 Giggle: The pair laughed and whispered in each other’s ears as they posed for photographers 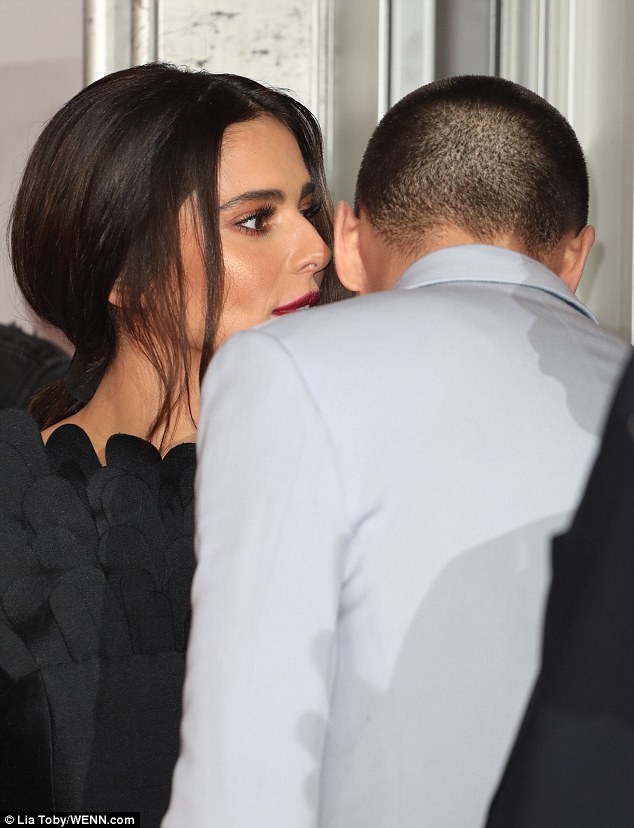 Whispering sweet nothings? The former Girls Aloud singer gazed at her beau as they spoke 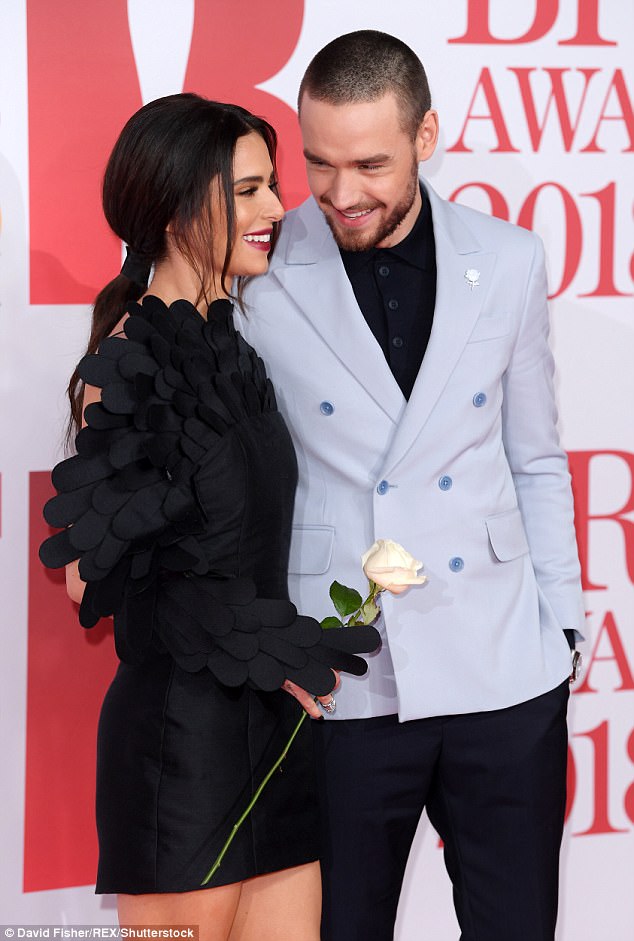 Liam also put on a dapper display himself, arriving at the celebratory gathering in a powder blue double-breasted blazer, which he wore over a black polo shirt.

Teaming his threads with black trousers, he added a further casual touch to his look with the addition of a pair of black running shoes.

It was revealed just the day before that Cheryl has planned to attend the awards ceremony with the father of her only child – as it was announced that he would be taking to the stage to perform with Rita Ora.

According to The Sun, the singer knew she would be seeing Liam cosying up to Rita onstage, but wanted to put on a united front with the former One Direction heartthrob after being left ’embarrassed’ by the split rumours.

The One Direction crooner and Rita, 27, are set to belt out their hit For You at the bash – the raunchy lead single for new flick Fifty Shades Freed.

While Cheryl is thought to prefer spending time at home with their son Bear, a source has revealed she attended the bash with her boyfriend, in order to show her support in the face of split claims.

An insider told the paper: ‘She knows everyone will be talking about her and Liam, and she’s really embarrassed about the whole thing.

‘It doesn’t help that Liam will be on stage singing a pretty sexual song with Rita that will get everyone talking.

‘But she also knows if she doesn’t attend it will be taken as a sign she is not supporting Liam.’

It has been implied that Cheryl is jealous of the amount of time Liam has been spending with Rita during promotion for the single – something her representatives firmly denied. 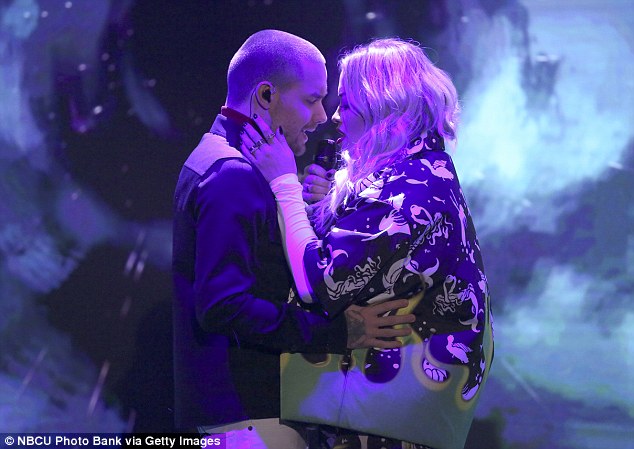 Staying strong: The singer, 34, reportedly knows it won’t help to see Liam cosying up to Rita onstage (above), but wants to support her beau after being left ’embarrassed’ by split rumours Standing her ground: A source said: ‘[Cheryl’s] really embarrassed about the whole thing. But she also knows if she doesn’t attend it will be taken as a sign she is not supporting Liam’ 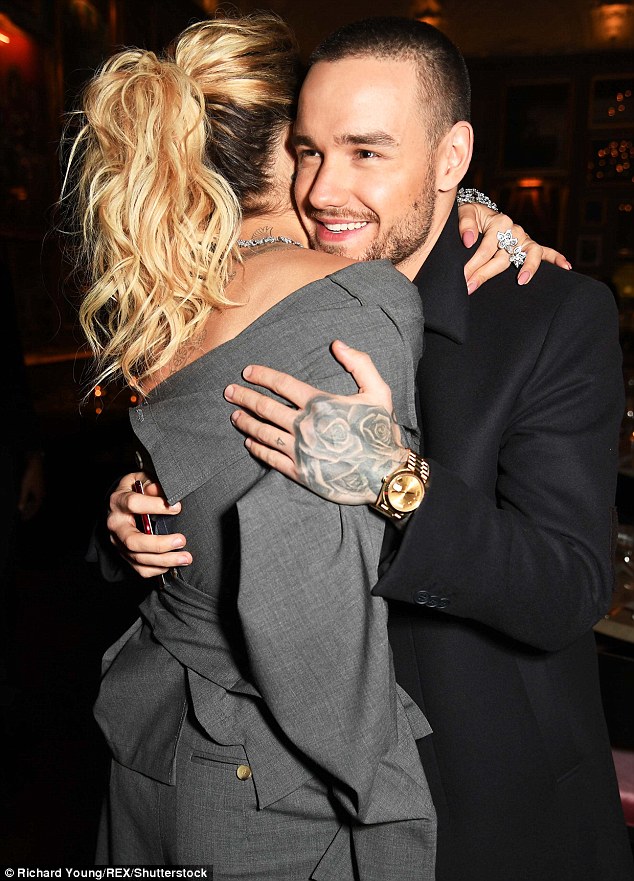 Close friends: The source added: ‘It doesn’t help that Liam will be on stage singing a pretty sexual song with Rita that will get everyone talking’ (pictured with Rita last month)

MailOnline has contacted Liam and Cheryl’s representatives for comment.

It was claimed last week that the couple’s romance was in trouble, less than a year after they welcomed their first child.

The new parents are reportedly struggling to find quality time together as they juggle their busy careers and care for their 11-month-old son, Bear, a source told MailOnline. 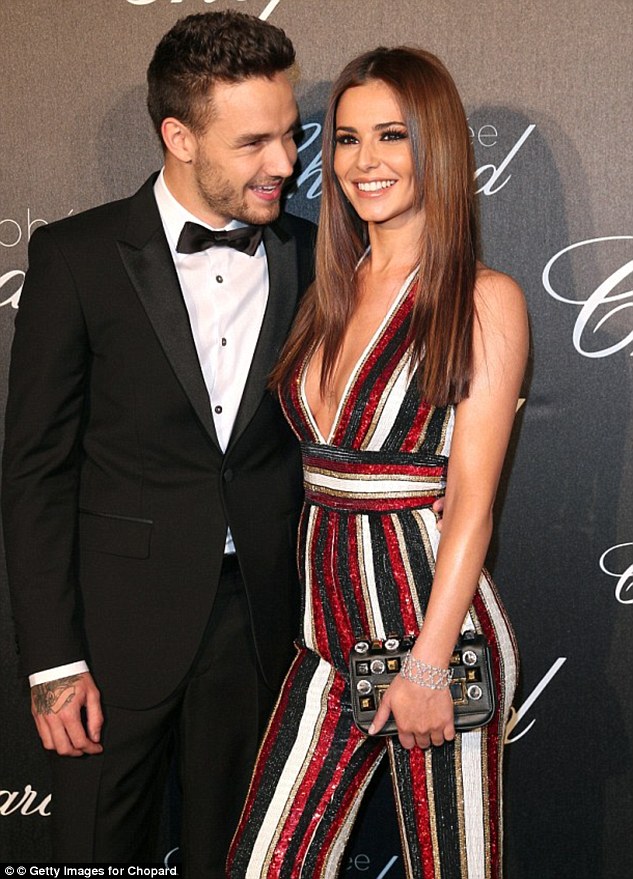 On the rocks: It has been claimed the pair are set to split after spending much of their time apart – with Liam travelling the world, while Cheryl is at home caring for son Bear

The insider claimed their relationship is ‘strained’, as the former One Direction star is spending nights away from home and touring the world with his solo album, while she looks after their baby son.

Cheryl is thought to be spending much of her time at home on her own with Bear, because she would rather stay in watching TV than go out to showbiz parties.

The source said: ‘Cheryl basically went into hibernation when she got pregnant and has made the decision to be a stay at home mother with no nanny and is looking after bear herself. She doesn’t like going out much as she used to.’ 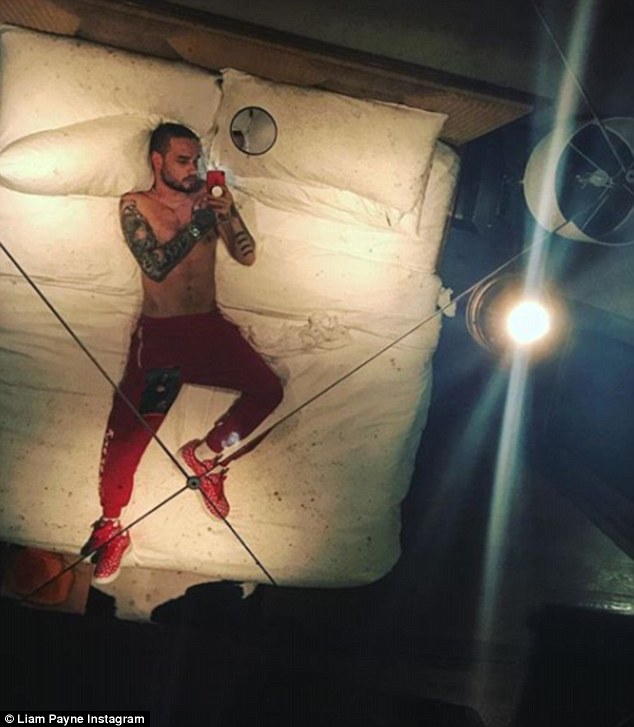 Distance: The insider claimed the former One Direction star is spending nights away from home and touring the world with his album (above), while she looks after their baby son 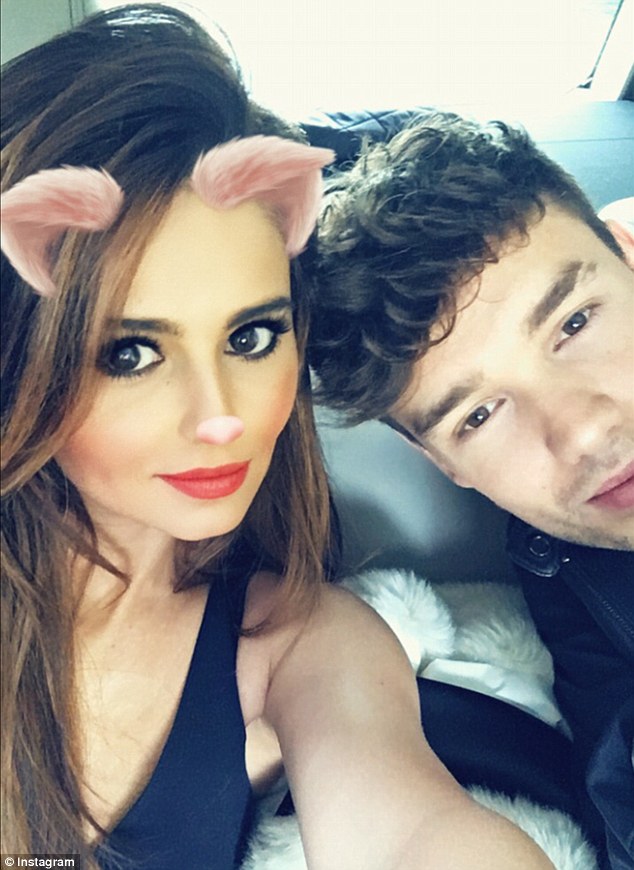 ‘Struggling to spend time together’: Meanwhile Cheryl is thought to be spending much of her time alone at home with Bear, because she would rather stay in than go out to showbiz parties

While another friend close to the couple added: ‘The fact of the matter is, like most young couple’s with busy work lives and the demands of an infant they have been struggling to spend time together.

‘There are the very real strains of trying to adapt to parenthood whilst being in the spotlight and having to appear as though everything is rosy all of the time.

‘It is not real life and is not the life Cheryl and Liam are currently living as a couple.’

It was also reported by The Sun that Liam has spoken to lawyers to see what a split would mean for their shared assets and the care of their son – with Liam holding an estimated £54million fortune, and Cheryl around £20million. 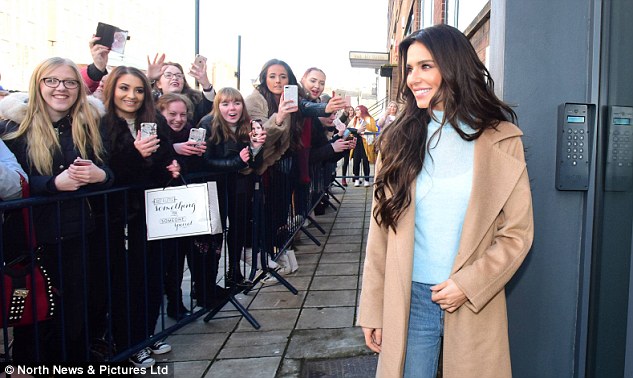 Doing her bit: However Cheryl hit back at the split rumours as she launched Cheryl’s Trust Centre on Tuesday (above), revealing that the charity project is her ‘sole focus’ 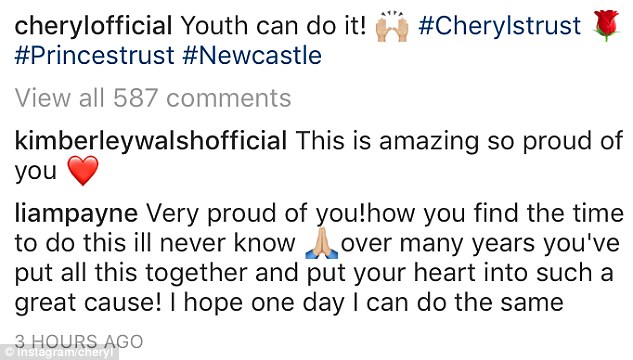 ‘You put your heart into such a great cause’: Liam then went on to praise Cheryl for her philanthropy, with a gushing comment on one of her Instagram photos

However, the Fight For This Love hitmaker was quick to hit back at the split rumours as she launched Cheryl’s Trust Centre on Tuesday.

Following days of speculation, BBC presenter Dan Walker touched upon her love life life at the launch, but a slightly frosty Cheryl appeared keen to deflect discussion away from her relationship.

She said: ‘(Talk of my personal life) is not frustrating. It doesn’t bother me at all as my focus is solely on this and I’ve waited seven years and none of that matters – this is most important to me.’

Liam then went on to praise Cheryl for her philanthropy, with a gushing comment on one of her Instagram photos. Joining the fray: The Bedroom Floor is joining a number of high-profile performers at the bash, including Justin Timberlake – who was seen enjoying a night out in London on Tuesday (above) 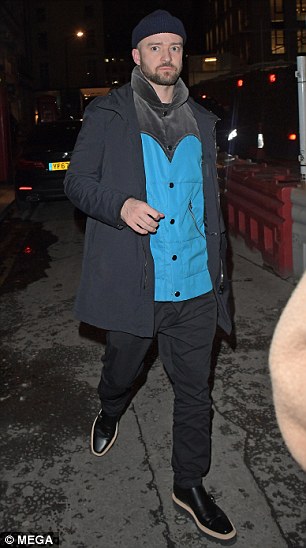 Casually cool: Justin sported a vibrant blue jacket and navy beanie as he partied the night away at Tape nightclub Feeling good: He threw up a number of playful poses at the camera, ahead of his performance at the BRITs – held at London’s O2

The Bedroom Floor is joining a number of high-profile performers at the bash, including Dua Lipa, Ed Sheeran and Justin Timberlake – who was seen enjoying a night out in London on Tuesday night.

The event will be hosted by comedian Jack Whitehall, who gave insight into the goings-on backstage on Good Morning Britain, ahead of the bash.

Speaking to Richard Arnold on Wednesday morning, he joked: ‘I walked past Stormzy getting a pedicure. I wondered what that was! His feet were amazing though. Incredible, beautiful feet!’

While he is excited to front proceedings, the Bad Education star admitted he is still nervous about fluffing up his words and jokes.

‘I’m slightly apprehensive about it and worried because obviously it’s the Brits and it’s one of those things where you go, ‘Oh what can go wrong?’ – I mean, so much could go wrong,’ he added.

The BRITs will also see the music industry come together for a performance in tribute to the 22 victims of the Manchester attack at Ariana Grande’s concert last May. 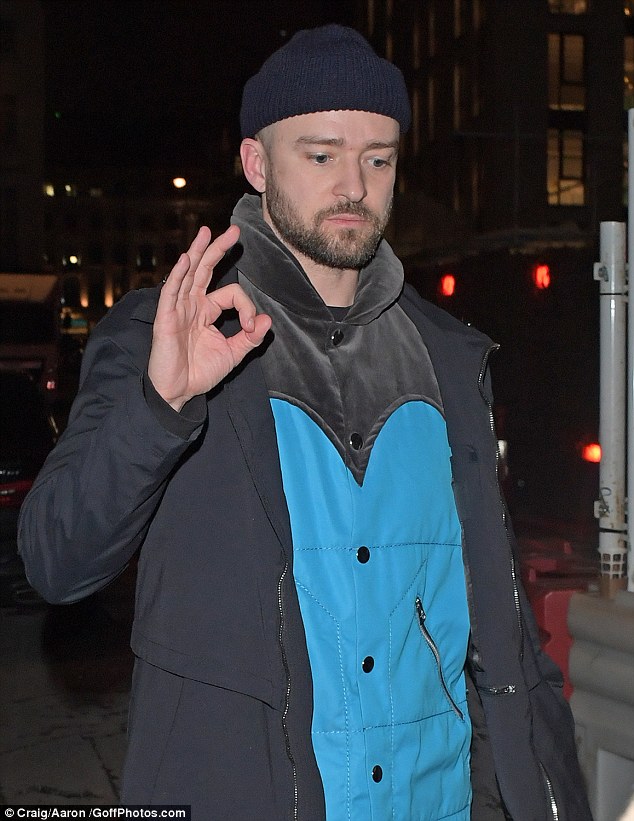 Ready to go: Justin will be performing with Chris Stapleton at the event, hosted by comedian Jack Whitehall