British and American passengers on a coronavirus-ravaged Antarctica cruise liner have been told to wait until they test negative for the virus before being repatriated while Australians prepare to be flown home today.

About 128 of 217 people on board the Greg Mortimer, which was stranded off the coast of Uruguay on its way to the Antarctic, have tested positive for the deadly virus.

Six of those, three Australians, two Filipinos and a Briton, have been taken off for treatment in the capital Montevideo.

Foreign Minister Ernesto Talvi said on Twitter that an agreement had been reached through ‘intense conversations and very close cooperation with the Australian government.’

As for the European and American passengers on the Greg Mortimer, they must ‘wait until they test negative’ before organising their repatriation via Sao Paulo, Brazil, the ship’s owner said.

There are five Britons on board, the British embassy in Montevideo told AFP.

Aerial view of Australian cruise ship Greg Mortimer off the port of Montevideo yesterday. British and American passengers are being asked to wait on the ship until they test negative for the coronavirus while repatriation flights have been arranged for Australian citizens for today 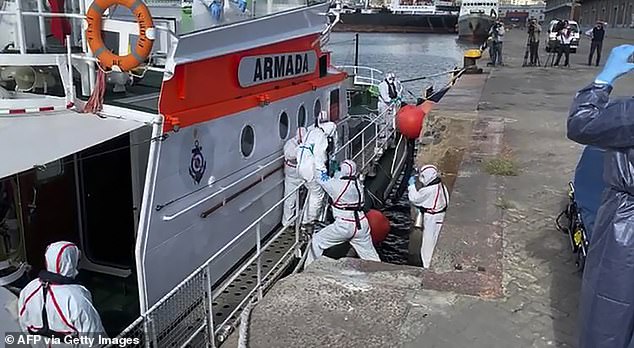 In this picture from last week, medical workers help a passenger of an Australian cruise ship to disembark at Montevideo’s port 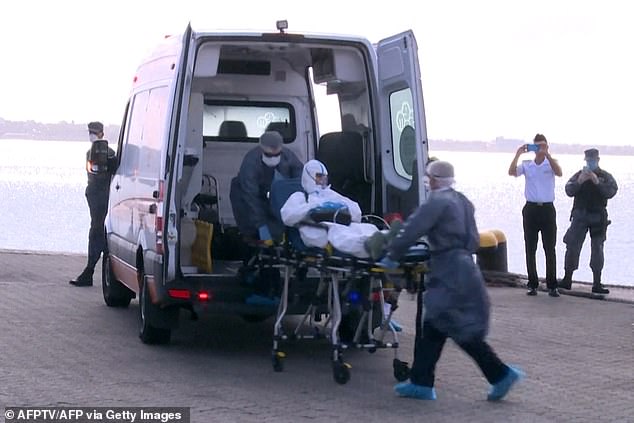 ‘We are working relentlessly to find a way to bring them safely back to the UK,’ said spokeswoman Veronica Psetizki.

The cruise ship’s owner, Aurore Expeditions, has ‘contracted a medical plane… to repatriate the Australian and New Zealander passengers,’ Uruguay’s foreign ministry said, adding that the plane had been given permission to arrive on Thursday.

Around 100 Australians are aboard, and negotiations were underway to allow the New Zealanders to fly with them, Aurore said.

It said that of those still on the ship, no-one was suffering from a fever.

The Airbus A340 plane contracted to fly the Aussies and Kiwis home ‘is configured with medical facilities aboard… to look after the health and security of everyone,’ said Aurore. 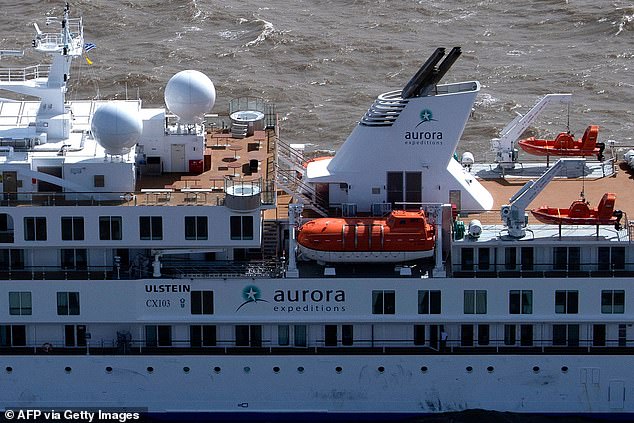 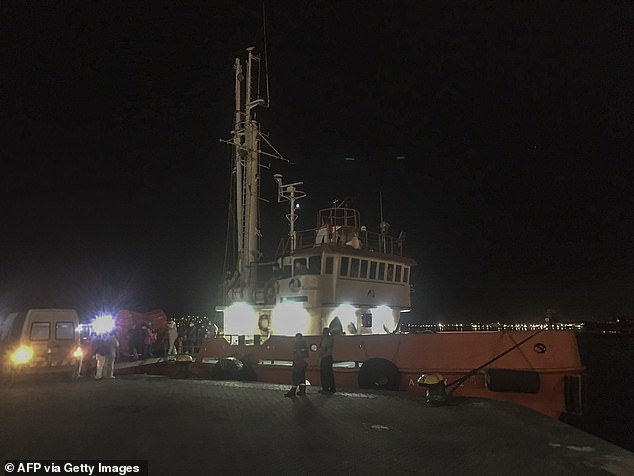 In this handout picture released by Uruguay’s Navy, medical workers help to transfer passenger of an Australian cruise ship at Montevideo’s port on Sunday night 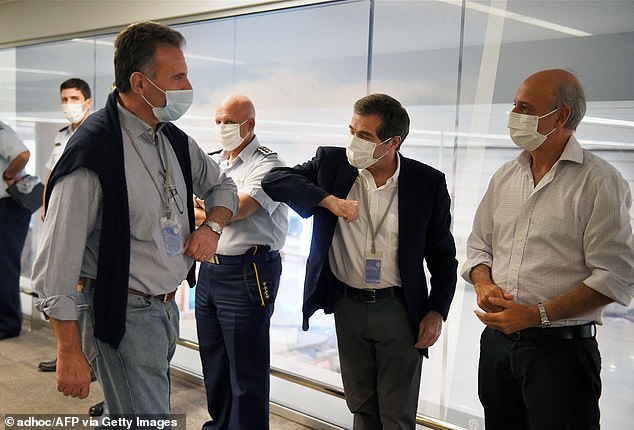 An image from last month shows Uruguay’s Health Minister Daniel Salinas (left) and Foreign Minister Ernesto Talvi greeting each other with an elbow bump as Defence Minister Javier Garcia (right) looks on while they wait for the arrival of group of Uruguayans who were stranded in Peru due to the coronavirus.

The plane will carry passengers who test both positive and negative for the virus.

It is due to arrive from Portugal and then fly on to Melbourne, after which all passengers will be required to spend two weeks in quarantine.

‘Everybody wants to go home. It’s not a nightmare but it’s not the ideal situation,’ Charley Nadin, 67, an Australian anaesthetist, told AFP by WhatsApp.

He and fellow Australian Maurice Clifford, 71, an orthopaedic surgeon, boarded the vessel in Ushuaia, in the far south of Argentina on March 14th.

They were due to travel to Antarctica, South Georgia and Elephant Island for the holiday of a lifetime.

But on 21 March with border closings and lockdowns in South America and Australia, the exploration was called off.

Some of those on the ship are keeping their spirits up despite the large numbers of passengers, mostly elderly people, to have fallen ill.

The plight of the Greg Mortimer is the latest affecting the global cruise industry, which has seen vessels refused entry to ports and others locked down after new-coronavirus cases were confirmed onboard during the pandemic.

The ship- named after an Australian mountaineer who scaled Mount Everest – set sail for the Falkland Islands but was denied entry there as authorities did not have the facilities to cope with COVID-19 cases.

The liner headed on to the only port along the Atlantic coast of South America still open, Montevideo. 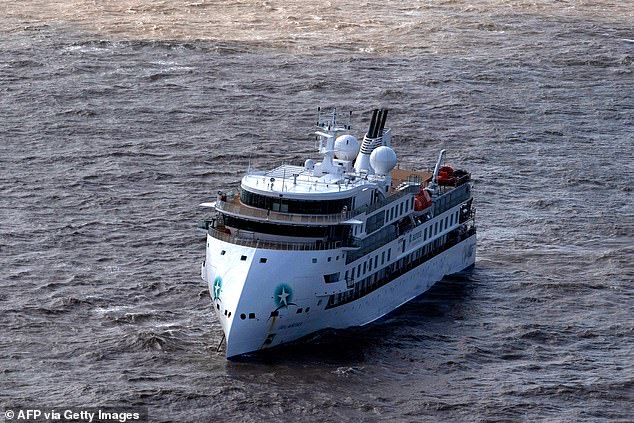 Although the ship has been anchored in the Rio de la Plata about 15 miles off the port for the last week, health authorities from Montevideo have been aboard to help passengers.

Uruguay’s Health Minister Daniel Salinas told AFP on Tuesday that the six being treated in private clinics in Montevideo were in a stable condition.

Two were in intensive care.

According to a doctor who boarded the ship, Sebastian Yancev, the high infection rate was due to mistakes made in isolation measures, including leaving people who had tested negative with those who were positive.

Yancev said Ushuaia was the likely source of the contagion.

Despite their ordeal, both Nadin and Clifford said they would like to come back, not just to finish their expedition but also to visit Montevideo.

‘The health authorities in Montevideo have been incredibly good and there is nothing but praise from all of us… their humanity and care for all of us here has been extraordinary,’ said Nadin.

‘There’s an irony there that we’ve been down there very carefully protecting the environment in Antarctica so we don’t leave any bacteria or bugs down there and in the meantime we’re spreading this disease amongst ourselves,’ said Clifford.