Brittany Higgins has admitted to a jury that she was ‘clearly wrong’ when she said she stashed away the dress she wore when she was allegedly raped for six months.

The former political staffer was confronted with photo proof of herself wearing the white cocktail number to a birthday party, some two months after the alleged incident, during the rape trial of her former colleague Bruce Lehrmann on Thursday.

Ms Higgins told Lehrmann’s ACT Supreme Court rape trial earlier in the day that she put the dress she was wearing that night in a plastic bag under her bed for six months, ‘untouched and uncleaned’.

She told the jury that, once it was clear she couldn’t report the alleged assault without losing her job with Defence Minister Linda Reynolds, she ‘very symbolically washed the dress’.

‘I wore it once more but I never wore it again after that,’ she said.

But during cross-examination from Lehrmann’s barrister Steven Whybrow, Ms Higgins was shown a photograph of her wearing the same dress in May 2019 at Ms Reynolds’s birthday party in Perth.

Under cross examination from Lehrmann’s lawyer Steven Whybrow, Ms Higgins denied lying – but admitted she had made a mistake in her timeline of events.

Brittany Higgins texted her father – known as ‘Papa Bear’ – to say that there had been an ‘incident’, the ACT Supreme Court heard. Higgins arrives at court, dressed in black, on Thursday

Mr Whybrow put to her that she travelled to Perth on April 13, which would mean the dress was only under her bed for a matter of weeks, rather than six months, as she initially claimed.

‘It stayed under my bed for a period of time,’ she told the court.

‘I said six months, I was clearly wrong on that but it stayed under my bed for a period of time.’

When he asked whether it would have been difficult for her to wear that dress again, Ms Higgins told the court: ‘I was reclaiming my agency when I took it to Perth.

‘It was an empowerment thing, saying the worse thing in the world happened to me in this dress and I never wore it beyond that time.

‘It sounds stupid but that’s just the truth.’

Earlier the court heard Ms Higgins had texted her dad to say a co-worker had been ‘inappropriate’ after she was allegedly raped in a parliamentary office by her colleague Bruce Lehrmann.

Ms Higgins messaged her father – who she calls Papa Bear – four days after Lehrmann allegedly sexually assaulted her in March 2019. She told her dad that there had been an ‘incident with a person at work’.

But she did not expressly say in the texts what exactly she was referring to. The messages were read out loud during Lehrmann’s rape trial in front of an ACT Supreme Court jury on Thursday.

Lehrmann has pleaded not guilty to one count of sexual intercourse without consent.

Ms Higgins told the court she ‘wanted to tell my dad but I didn’t want to put it in writing or in text because I was concerned about … implications’. 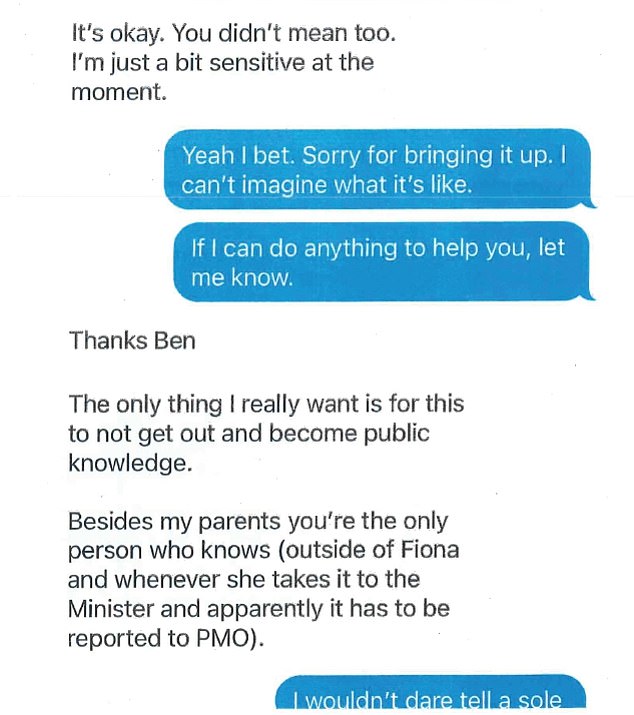 In another text to former lover Ben Dillaway in the immediate aftermath of the alleged rape, she admitted: ‘The only thing I really want is for this to not get out and become public knowledge (pictured)

The court heard on March 25 – three days after the alleged assault – Ms Higgins received a message from her father: ‘I had a nice weekend Friday night.’

The following day, Ms Higgins replied: ‘That sounds really nice and I’m very jealous. Quiet time would be beyond idea. Heads up, Canberra is getting chilly so bring a jacket.’

Later that day, she added: ‘I’m fine but just wanted to give you a heads up there was an incident with a person at work being inappropriate. Can’t give you details now.’

Ms Higgins told the court she wanted to tell her father ‘but I didn’t want to put it in writing or in text because I was concerned about … implications’.

Instead, the court heard she told her father about the alleged assault during a phone call, prior to her message about the weather in Canberra.

Emails exchanged in the days after the alleged assault

It was also revealed in court that Mr Lehrmann sent Ms Higgins a series of admin emails in the days after the alleged assault.

On March 23, the day after their drunken night out, Ms Higgins received an email from Mr Lehrmann which was forwarded automatically from his account.

She explained to the court that Mr Lehrmann would receive a range of clips – all titled ‘Da Clips’ – which were sent to a list of people in the office, but Ms Higgins didn’t get them because she was relatively new to the office.

While her email was being added to the list, the accused forwarded them to her – ‘even on a weekend,’ she told the court.

On Monday, March 25 – three days after the alleged assault, the court heard he emailed her again with a personal message relating to the fact that she was not yet on the proper email list. 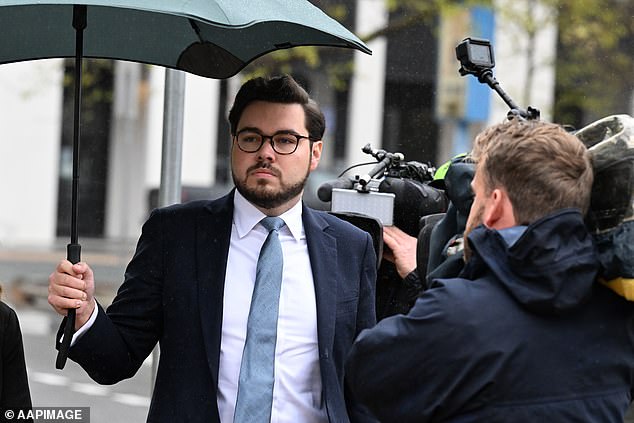 ‘Not letting me send to private email. Will email David and get your gmail on the private list,’ he wrote.

Ms Higgins responded: ‘So weird [that it won’t let you send to me private email]. ‘Honestly that would be the best if you could [add me to the list].

Ms Higgins explained in court that she wanted to behave as though everything was normal, and responded as she usually would.

On April 1, she had a meeting with Ms Reynolds and former chief-of-staff, Fiona Brown, in the office where the alleged attack took place.

‘That was a distracting element so I was quite panicked because I was in the room with the couch so the words were a little lost,’ she told the court on Thursday.

She said Ms Reynolds appeared empathetic, ‘adding something along the lines of “I didn’t think he was capable of something like that”,’ Ms Higgins added.

‘At that point, the conversation became about the election, what I was going to do, and if I did something that I would need to let the office know.

‘Just by having the meeting in the room, it all seemed really off. My interpretation was that it was a bit of a scare or intimidation tactic.’

Ms Higgins conceded that may not have been the case, but that was her interpretation.

‘For someone to go into that space after having such a traumatic event in there – that was quite an adversarial space,’ she said. 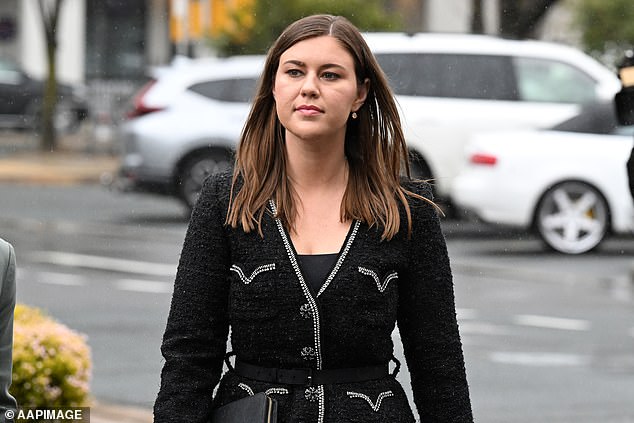 A week after her meeting with Ms Reynolds’, she was taken to the police sexual assault unit.

Three days after that, on April 13, she decided to withdraw her complaint.

She told the court: ‘I felt pressured from my workplace not to pursue it any further at that time.

‘I tried to make other arrangements to see if they’d e accommodating and they weren’t it became really apparently that there were job implications if I did.’

‘I really wanted to see if I could work from home and go to the Gold Coast or from a home base where I had a support system.’

Ms Higgins didn’t want to stay in Canberra throughout the election because she was told that everyone who did didn’t get rehired for the following term.

Former chief-of-staff, Fiona Brown, told her that she wouldn’t have a job if she stayed in Canberra, so she decided to go with Ms Reynolds to Western Australia for the campaign.

‘I’d gone my entire life working for this moment,’ she told the court. ‘Why was I going to let this person take it away from me?

She told the court on Wednesday that she decided to buy a pregnancy test while in Perth. 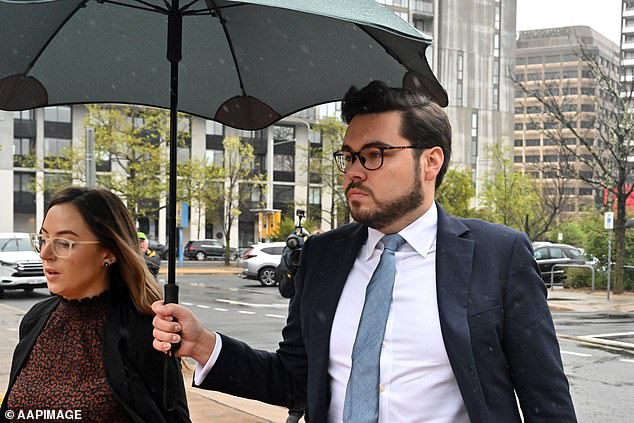 Earlier on Thursday, Ms Higgins wept in court as the trial the moment the pair arrived at Parliament House on the night of the alleged assault. 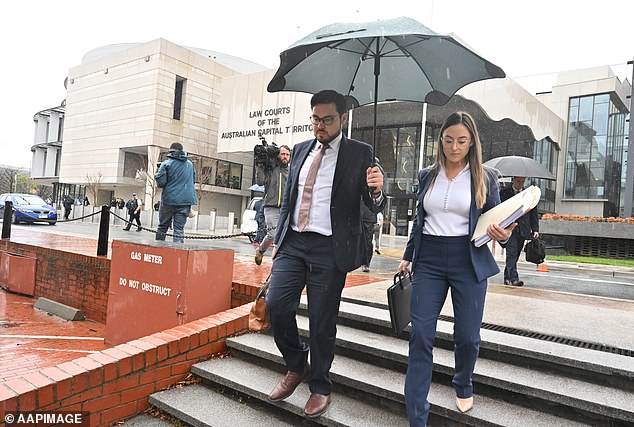 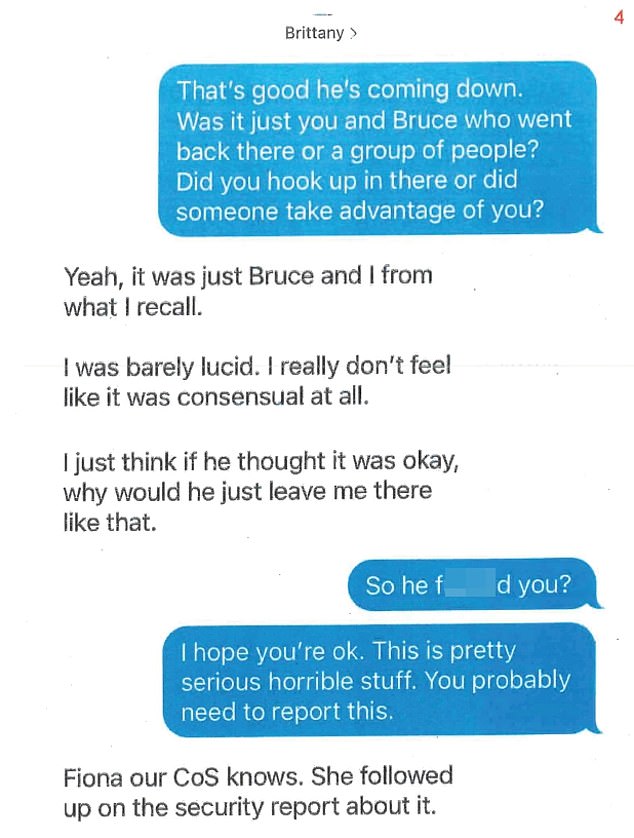 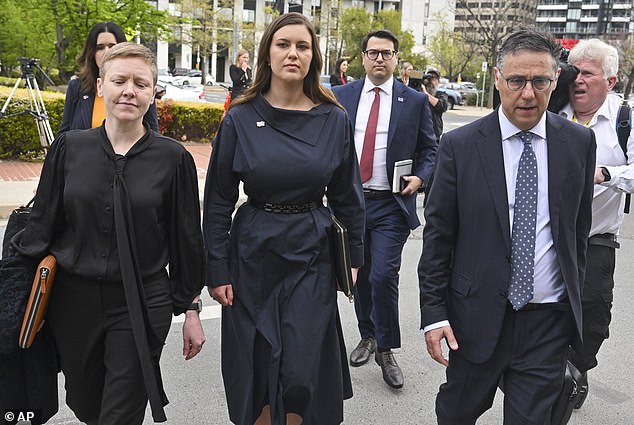 Earlier in the day, Ms Higgins was also shown photographs of the office where she allegedly raped, including the grey leather couch.

When the prosecutor asked where her legs were, Ms Higgins replied: ‘Spread open.’