Broadcaster and poet Clive James dies at 80 after cancer battle

Poet, critic and broadcaster Clive James has died at the age of 80, his agents said today.

In 2011, James revealed he was suffering from terminal leukaemia and had been fighting the blood cancer since the year before that.

In a statement announcing his death, United Agents said: ‘Clive James, poet, critic and broadcaster, died at his home in Cambridge on Sunday 24th November 2019. A private funeral attended by family and close friends took place in the chapel at Pembroke College, Cambridge on Wednesday 27th November.

‘Clive died almost ten years after his first terminal diagnosis, and one month after he laid down his pen for the last time. He endured his ever-multiplying illnesses with patience and good humour, knowing until the last moment that he had experienced more than his fair share of this ‘great, good world’.

Clive James, the broadcaster and critic, has died after battling leukaemia, his agent has said 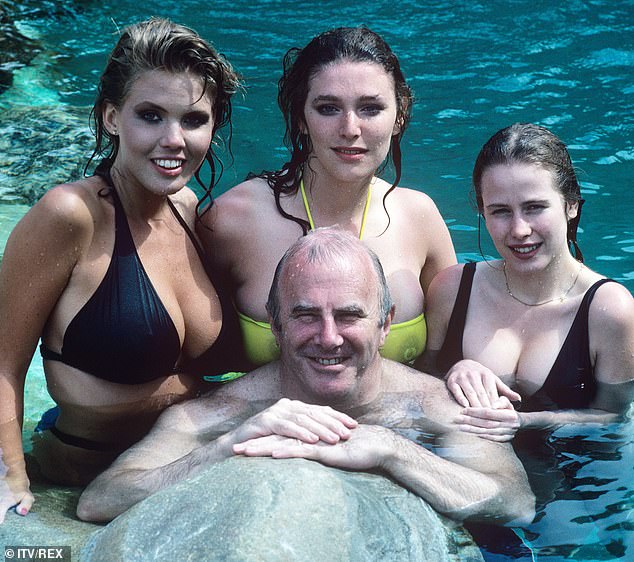 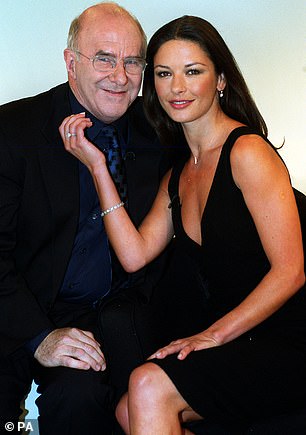 ‘He was grateful to the staff at Addenbrooke’s Hospital for their care and kindness, which unexpectedly allowed him so much extra time. His family would like to thank the nurses of the Arthur Rank Hospice at Home team for their help in his last days, which allowed him to die peacefully and at home, surrounded by his family and his books.’

‘You were incredibly kind to me and there will never be anyone quite like you. My love and thoughts to his family and friends. A very sad loss of a brilliant man.’

The journalist, joker and intellectual who enjoyed a long career as a writer and broadcaster

A biography of James recently appeared on his website. This read –

Clive James was born in Sydney, Australia, in 1939 and educated at Sydney Technical High School and Sydney University, where he was literary editor of the student newspaper Honi Soit and also directed the annual Union Revue.

After a year spent as assistant editor of the magazine page of the Sydney Morning Herald he sailed in late 1961 for England.

Three years of would-be bohemian existence in London were succeeded by his entry into Cambridge University, where he read for a further degree while contributing to all the undergraduate periodicals and rising to the Presidency of Footlights.

His prominence in extracurricular activities having attracted the attention of the London literary editors, the by-line ‘Clive James’ was soon appearing in the Listener, the New Statesman, the Review and several other periodicals, all of them keen to tap into the erudite verve which had been showing up so unexpectedly in Varsity and the Cambridge Review.

Yet the article that made his name was unsigned. At the invitation of Ian Hamilton, who as well as editing the Review was assistant editor of the Times Literary Supplement — which was still holding at the time to its traditional policy of strict anonymity — the new man in town was given several pages of the paper for a long, valedictory article about Edmund Wilson.

Called ‘The Metropolitan Critic’ in honour of its subject, the piece aroused wide-spread speculation as to its authorship: Graham Greene was only one of the many subscribers who wrote to the editor asking for their congratulations to be passed on, and it became a point of honour in the literary world to know the masked man’s real identity.

Embarrassed to find himself graced with the same title he had given his exemplar, Clive James rapidly established himself as one of the most influential metropolitan critics of his generation, but he continued to act on his belief that a cultural commentator could only benefit from being as involved as possible with his subject, and over as wide a range as opportunity allowed. 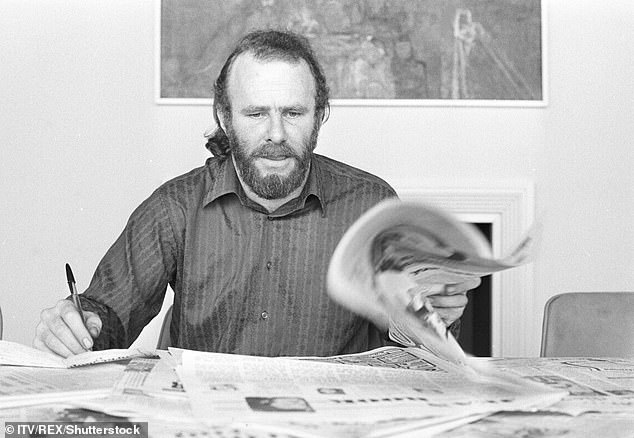 The Sunday newspaper The Observer hired him as a television reviewer in 1972, and for ten years his weekly column was one of the most famous regular features in Fleet Street journalism, setting a style which was later widely copied. (Selections from the column were published in three books — Visions Before Midnight, The Crystal Bucket and Glued to the Box — and finally in a compendium, On Television.)

During this period he gradually became a prominent television performer himself, and over the next two decades he wrote and presented countless studio series and specials, as well as pioneering the ‘Postcard’ format of travel programmes, which are still in syndication all over the world.

His major series Fame in the Twentieth Century was broadcast in Britain by the BBC, in Australia by the ABC and in the United States by the PBS network. But despite the temptations and distractions of media celebrity, he always maintained his literary activity as a critic, author, poet and lyricist.

In 1974, his satirical verse epic Peregrine Prykke’s Pilgrimage was the talk of literary London, many of whose leading figures were disconcerted by appearing in it, and more disconcerted if they were left out.

In the same year, The Metropolitan Critic was merely the first of what would eventually be seven separate collections of his articles, and in 1979 his first book of autobiography, Unreliable Memoirs, recounting his upbringing in Australia, was an enormous publishing success, which has by now extended to more than sixty reprintings.

It was followed by two other volumes of autobiography, Falling Towards England and May Week Was in June, and by an omnibus edition of all three volumes under the generic title of Always Unreliable.

‘In addition there have been four novels (the first, Brilliant Creatures, was a bestseller), several books of poetry — a complete edition, called The Book of My Enemy, was published in Britain in 2003 — and a collection of travel writings, Flying Visits.

His literary journalism first became familiar in the United States through Commentary, the New York Review of Books and the New Yorker, and later through the New York Times, the Los Angeles Times and the Atlantic Monthly.

His recent outlets for literary journalism in Britain have included the TLS, the LRB, the Guardian, the Spectator and the Liberal, and in Australia the Australian Book Review and the Monthly.

His fourth novel, The Silver Castle, the first book about Bollywood, was published in the United States in 1996. Collaborating with the singer and musician Pete Atkin, he wrote the lyrics for six commercially released albums in the early 1970s, and the partnership resumed with three more albums after the turn of the millennium, culminating with a hit appearance for their two-man song-show on the Edinburgh Fringe in 2001, and tours of Britain in 2002, 2005 and 2005.

There was a tour of Australia and Hong Kong in early 2004.

‘After helping to found the successful independent television production company Watchmaker, Clive James retired from mainstream television in the year 2000. In retirement he founded www.clivejames.com, the world’s first personal multi-media website of its type.

The site continued to be among the main interests of his post-television years. He remained active in several literary fields. His first two collections of essays in this later period were Reliable Essays and Even as We Speak, and in America there was a major selection of essays called As of This Writing.

His principal post-retirement collection of essays was The Meaning of Recognition, published by Picador in late 2005. But the critical book that drew most attention was his study of culture and politics in the 20th century, Cultural Amnesia, published by Norton, in the USA, and Picador in the UK, in the period 2007-2008, and since reprinted many times. During this time there were also a fourth and fifth volume of his memoirs: North Face of Soho covered his years in literary London and The Blaze of Obscurity his years in television.

Another collection of essays, The Revolt of the Pendulum, was published in 2009. He continued to write poetry and two collections were published: Opal Sunset and Angels over Elsinore, the second of which was short-listed for the Costa Prize.

He was a regular contributor to the BBC Radio 4 slot A Point Of View from 2007 to 2009, and the transcripts of those broadcasts are collected in A Point Of View. In 2010 he fell seriously ill and was diagnosed with leukaemia and COPD.

‘During his long illness, he came increasingly to focus on writing poetry. The slim collection Nefertiti in the Flak Tower (2012) contained the poem ‘Whitman and the Moth’ which was written after his second hospitalisation in 2010 and which was the first taste of a new poetic direction.

In 2014 his poem ‘Japanese Maple’ was published in The New Yorker and became a viral sensation. It was collected in Sentenced to Life, a book of poems which became an unexpected best-seller in 2015.

As his health declined his poetic output increased. Injury Time, a second collection with a similar theme, was published in 2017, followed by The River In The Sky (2018), a book-length poem and an autobiographical meditation on the biggest questions: the meaning of life and how to live it.

In 2014 his much-acclaimed translation of Dante’s The Divine Comedy was published in the UK and the USA, and has established itself as a standard text throughout the English speaking world.

‘During this decade there was also a small book of literary essays, Latest Readings, published in America by Yale, and a return to his early journalistic metier of television critic: a book about binge-watching called Play All. Published in October 2019, Somewhere Becoming Rain collected together a lifetime of critical appreciation of the work of Philip Larkin.

‘After a long and ultimately unsuccessful operation to remove a cancer on his cheek in February 2019, which left him frail and almost blind, Clive James spent the spring and summer of 2019 writing and editing an autobiographical anthology called The Fire Of Joy, a raid on ‘the treasure-house of his mind’: a collection of the poems that first awoke in him his love of poetry and that were lodged forever in his memory.

The book is furnished with his notes on each poem and on the capacity of a well-furnished mind to endure and transcend, to escape the confines of the body. The Fire of Joy was finished a month before his death, and will be published in 2020.

‘Clive James married the scholar Prue Shaw in 1968, and they had two daughters: Claerwen, molecular biologist turned painter, and Lucinda, civil servant and world expert on CSI: Miami. In 1992 he was made a member of the Order of Australia, in 1999 an honorary Doctor of Letters of Sydney University, and in 2003 he received Australia’s premier award for poetry, the Philip Hodgins Memorial Medal.

In 2008 he was awarded the George Orwell Special Prize for a lifetime achievement in journalism and broadcasting, and was later appointed an Honorary Fellow of Pembroke College, Cambridge.

In 2014 he was awarded the President’s Medal of the British Academy. The university of Essex made him a Doctor of the University in 2015. In the same year BAFTA awarded him a Special Award for lifetime achievement. He holds the Australian decoration AO and the British decoration CBE.’