Brockfast! Back garden restaurant set up during lockdown has earned its stripes with local badgers

There’s no need to book, the food’s great and it’s proving very popular with the going-out sett.

Yes, this late-night alfresco eatery really is a must-visit… if you’re a badger, that is.

Driving instructor Marcel Payne set it up in his suburban semi’s back garden while he was unable to work for three months during lockdown and home-schooling son Lewis, eight.

Mr Payne, 49, has even started naming the regular diners. He took a photograph of five – Biscuit, Zeb, Smudge, Beavis and Biggs – tucking into a typical offering of dog food and fruit but sometimes ten badgers at a time turn up.

Other regulars include Nervous Nerys, who hangs about at the back, and cubs Curly and Babbu. Daily Mail photographer Georgie Gillard captured more glorious images when she visited on Wednesday night.

Fine dining: Mr Payne’s photo of, from left, Biscuit, Zeb, Smudge, Beavis and Biggs, enjoying a midnight feast. The badgers have more than 600 fans on Facebook

The first ‘customer’ to arrive, soon after 10pm, was Beavis, who is usually quickest off the mark. More badgers came until they had gobbled up all of that night’s menu by half past midnight.

Mr Payne’s house near Maidstone, Kent, backs on to a wood and he has been putting food out for them for several years.

He has now added a table low enough for them to eat from, placing the meals on plastic plates ahead of their arrival. 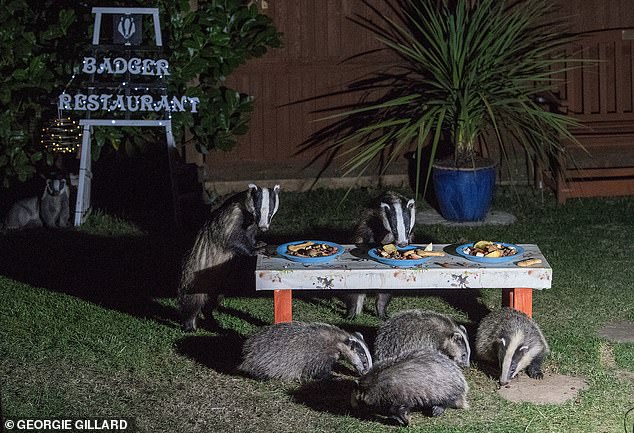 As two Badgers dine at the table set up in the back garden of Mr Payne’s house in Kent, four others search around on the floor for extras 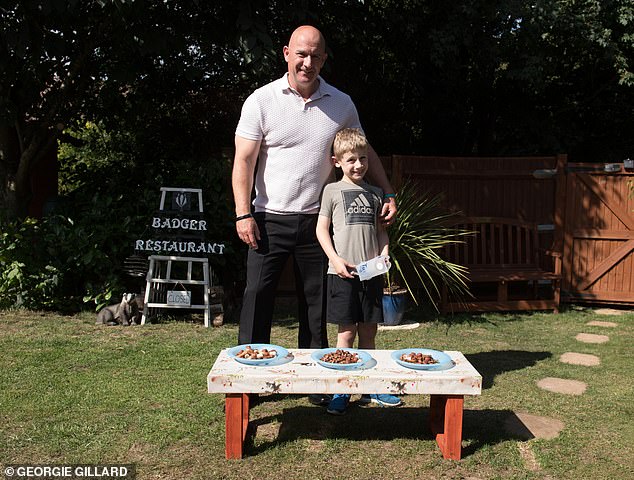 Marcel Payne set up the Badger Restaurant in his suburban semi’s back garden while he was unable to work for three months during lockdown and home-schooling son. Pictured: Marcel Payne, 49 and his son Lewis Payne, 8 from Maidstone

There is also a ‘Badger Restaurant’ sign, as well as ‘open’ and ‘closed’ notices, and he has built a wooden frame serving as an entrance for where the badgers emerge from under a hedge and even a tongue-in-cheek ‘bouncer’, in the form of a model badger, in case the diners get too, er, brock’n’roll in their behaviour.

A cat occasionally joins in – Mr Payne doesn’t know who it belongs to – and a fox, Reynard, although there is never any trouble between the animals. Other food he puts out includes tuna flakes, nuts, eggs and unsalted, sugar-free peanut butter sandwiches.

Wildlife charities say providing small amounts of supplementary food can help badgers during dry summers, so long as they do not become dependent on it. 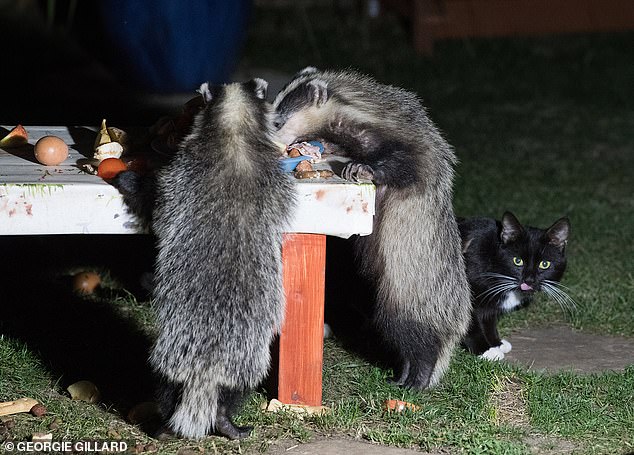 As many as ten badgers have been known to turn up, and have even been joined by a cat (pictured above) and a fox named Reynard 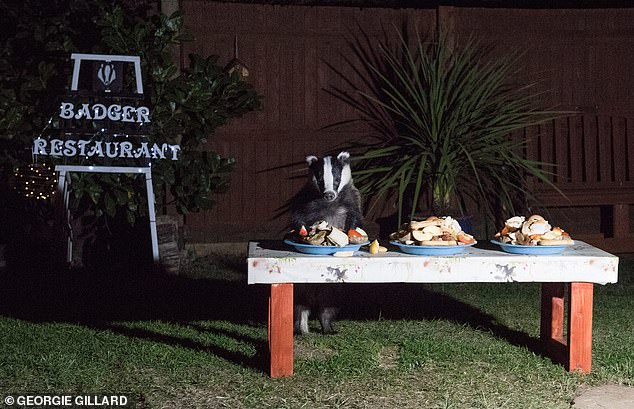 Table for one… but not for long: A lone badger starts tucking in at the purpose-built feeding station at the badger restaurant

Mr Payne, who spends about £25 a week on ingredients for the nightly feasts, said: ‘I try to keep the food natural and healthy and receive advice from wildlife groups about what to feed them.’

He shares photos, videos and menus on his Facebook page, called Badgers of Bearsted and Beyond, which is followed by more than 600 fans – including some in the US and Australia.

Mr Payne, whose wife Beverley, 42, is a receptionist at a doctor’s surgery and worked throughout lockdown, said: ‘I’ve always been interested in nature and wanted something to keep myself busy and to occupy Lewis. He loves it and helps me put the food out.

‘It’s a simple pleasure and has provided plenty of light relief. The response on Facebook has been amazing. Many people have never seen a live badger before.

‘They can look civilised when they first get to the table, but their table manners generally leave a lot to be desired.

‘Sometimes they’ll get on the table and the cubs often play fight over the food.’