A husband is accused of strangling his estranged wife after she refused his offer to sleep with him ‘one last time’ for £100.

But his ‘controlling jealous and possessive behaviour’ meant they separated in December 2016.

The couple still tried to do things together and had visited Wingham Wildlife Park in Kent before meeting friends at a pub on May 19.

Mrs Cavanagh was found dead at her flat in Bromley, south London the next day.

Martin Cavanagh, 35, and his wife Sophie, 31 (pictured together) got married in September 2011 but separated in December 2016. He is accused of her murder on May 19

His trial at the Old Bailey was read text messages Cavanagh sent to his wife, one of which said: ‘I want to have you one last final time.’

Mrs Cavanagh’s lifeless body was found under a duvet in her bedroom and her damaged mobile phone was found in the bin beside a pair of scissors.

Prosecutor Alexandra Healy told the court: ‘Sophie Cavanagh was only 31 at the time of her death in May this year.

‘The defendant strangled her at some stage on the night of 19 May in her flat in Bromley either late at night or very early in the morning on 20 May.

‘She and the defendant married in September 2011.

‘The defendant had a controlling, jealous and possessive manner both during the period of time that they were together in that relationship and after a point in time when they separated but remained married. He had a short fuse and got angry quickly.’

‘Mr Cavanagh continued to be jealous and tried to control Sophie.

‘If she attempted to start a relationship with other men they would not last long because he would find out and control the people she was talking to.’

She said Mrs Cavanagh had told a friend just a few days before she was killed that Cavanagh had offered her £100 to sleep with him – an offer she refused. 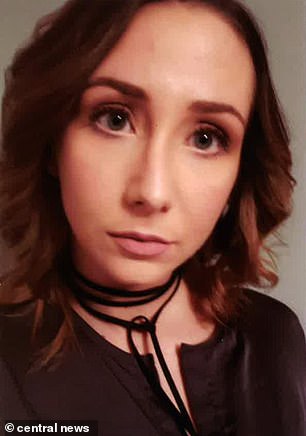 Victim: Sophie Cavanagh was found dead at her home in Bromley, south London

Text messages recovered from one of the defendant’s phones show he wrote to her in May accusing her of ‘rubbing salt into his wounds’ by seeing other men.

‘I want to have you one last final time,’ he said in one pleading text.

On the day of the alleged murder, CCTV showed the pair at the wildlife park then meeting friends at The Chatterton Arms at about 5.30pm that afternoon.

Phone records show Mrs Cavanagh’s phone was used to access the internet for long periods on the evening of May 19 before finally going offline shortly after midnight.

Police found the device in the kitchen bin. It appeared someone had tried to chop it up with a pair of scissors.

‘It is an indication that whatever led to the defendant strangling Sophie, that his jealous obsession with finding out with whom she was in contact with on her telephone played a part,’ said Ms Healy.

Ms Healy described an incident four months before the killing which she said illustrated Cavanagh’s ‘obsession’ with Mrs Cavanagh.

They had been out together for the evening when Sophie said she had to go because she was seeing another man, the court heard.

Cavanagh then sent a series of audio recordings to a mutual friend asking him where she was, as well as a live video clip showing him holding a ‘large curved knife’ to his neck then collapsing on the floor.

Police found him unhurt, indicating he had pretended to injure himself on camera.

‘The recordings demonstrate the state the defendant was in when he was obsessing about Sophie being with other men and was consumed with his jealously,’ said Ms Healy.

‘It shows the powerfulness of that jealousy and how it impacted on his behaviour.’