Bronson Norrish’s family hoped he would find true love on Married at First Sight, giving him the happiness he deserved after the tragic deaths of his mother and two brothers.

Instead, it has turned out to be one of the more disastrous couplings in the show’s history as his bride Ines Basic rejected him almost immediately.

The 34-year-old’s father Neil, who gave a moving speech at the reception about the three missing family members, was astonished at how bad the match was.

‘Christ knows how the experts put those two together. Is that really the best they could do?’ he told Daily Mail Australia.

Bronson (second from left) with his sister Nateisha, father Neil, and eldest brother Brodie, who died suddenly and mysteriously in 2010, in this family photo from 2004 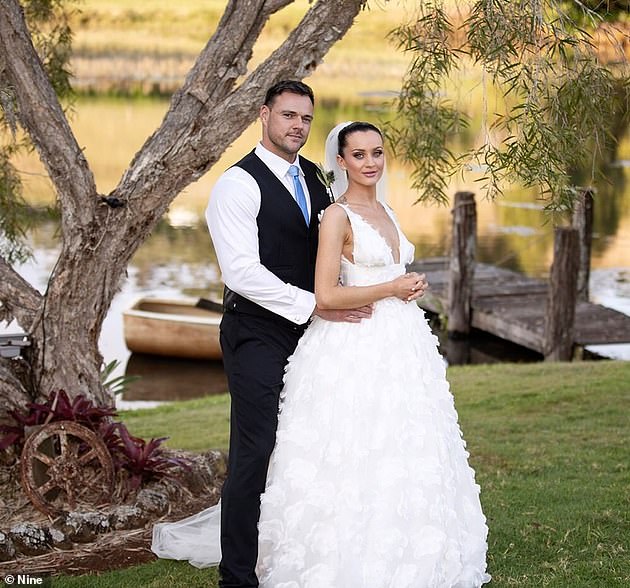 ‘I would have liked to have seen them find someone who could enjoy life with Bronson, not just the first five seconds.’

On the commitment ceremony on Sunday’s show, Ines said she wanted to leave the relationship immediately, while Bronson said he was prepared to give it more time.

He was cautioned about his language by one of the show’s relationship experts after he said his new bride had ‘acted like a c**t’ but viewers’ response online was still sympathetic toward him because of Ines’ hostile behaviour.

Bronson became a stripper to get his life back on track after going ‘off the rails’ following the murder of his brother Sasha when he was just 19.

But Ines wasn’t able to accept that and blew up as the couple posed for photos after the ceremony when she discovered his past.

‘This is purely disgusting to me, an ex-stripper is not supporting my future babies. I will never have a family with him!’ she said. 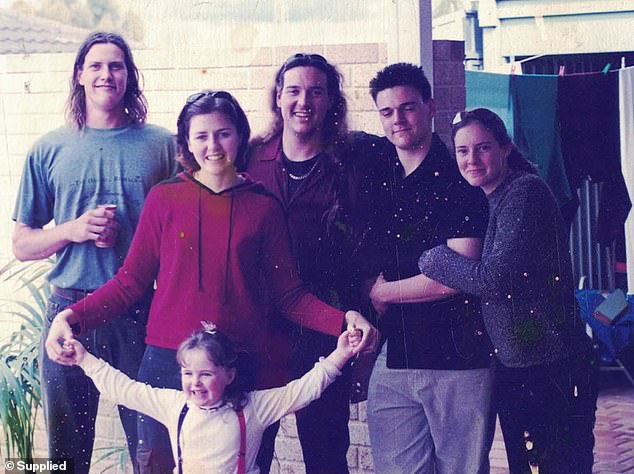 Sasha (left) was murdered by bikies in 2003, three years after this photo was taken. He is pictured with Brodie (centre), Bronson (second from right), Nateisha (right) and their cousins 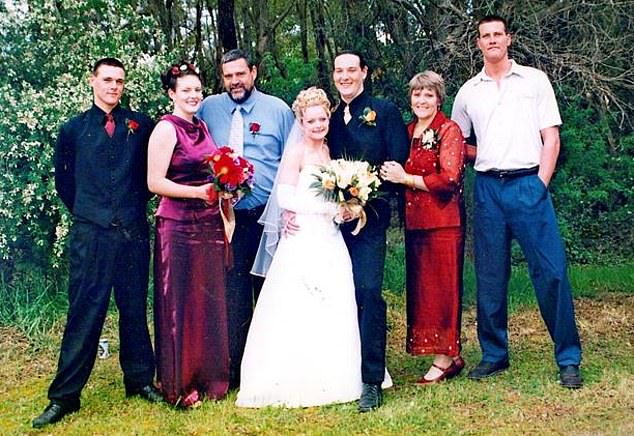 Mr Norrish said though things didn’t work out on the show for his son, he wasn’t unhappy about it as he just did it for a laugh.

‘(He’s on MAFS because) he’s willing to have a go at anything, he’s there for the experience and the fun of it all,’ he said.

‘He’s got a great attitude to life… he’s not there for his Facebook page.’

Mr Norrish revealed the heartbreaking details of how three of his immediate family members all died, and the emotional toll it took on his remaining son.

Bronson’s brother Sasha, 23, was murdered by a bikie gang, and five months later his mother Sancha, 52, died on the operating table.

Seven years after that his eldest brother Brodie, 32, died suddenly at his home in Perth, the cause of which is still unexplained.

Mr Norrish Snr, a farm equipment manufacturer, told Daily Mail Australia his 6ft 7in son Sasha fell in with the wrong crowd in his early 20s.

‘He was into drugs and got involved with a bikie gang recovering debts for them,’ he said from his home east of Perth.

His housemate was also involved in the gang and one day told them ‘I’m dead’ because he had stolen $300 and bags of drugs from the gang.

‘A week later he was dead,’ Mr Norrish said.

The day before his death, the friend told Bronson ‘if they kill me I’ll leave something to show I was there’. 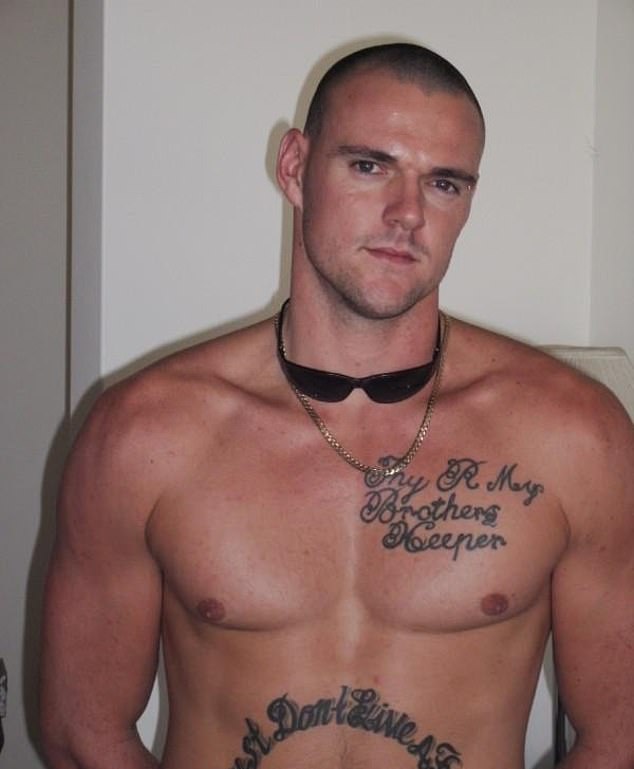 Bronson, 34, had a touching tribute to his late brothers Brodie and Sasha etched on his chest

The next morning, two girls found a patch of blood next to a walking track near Wundowie and called police, who found his driver’s licence nearby.

‘Police knew he’d been murdered. They went to a house on Great Eastern Highway and found his body chopped up into parts and being burned on a fire,’ Mr Norrish said.

‘Sasha was horrified and said “I’ve got to get out, this isn’t my scene”. But he was told that if you leave, you’re dead.

‘For eight months he never left our side. Wherever we went, he was there. But then he got too confident.’

On June 25, 2003, just a week shy of a year after telling the bikies he was out, Sasha left work at his father’s business about 12pm as he ‘had some friends coming over’.

Hours later his housemate found him in his car outside his home, staged to look like suicide by carbon monoxide poisoning.

‘The bikies got him and gassed him,’ Mr Norrish said. 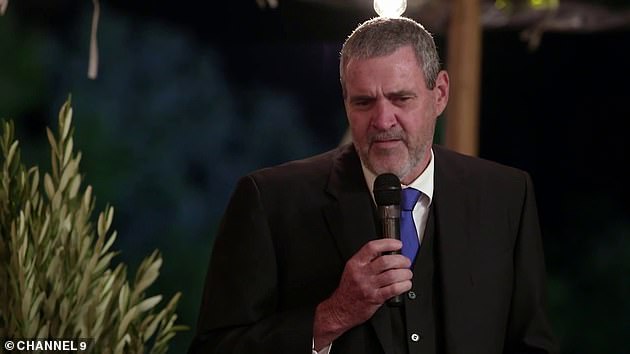 Mr Norrish gave an emotional speech at Bronson’s wedding to Ines on MAFS, which aired on Monday night, about the deaths in his family 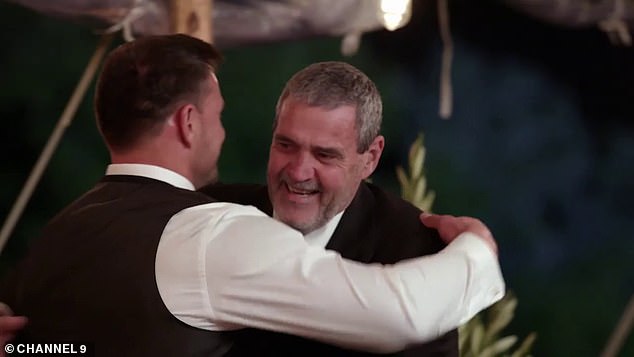 Bronson embraces his father after the speech, in which Mr Norrish told his son what the missing three family members would say about the wedding

The distraught father claimed police went through his car and found it was wiped clean of all fingerprints, but ruled his death a suicide so they wouldn’t have to take on the bikie gang.

‘I decided it was better to keep three kids alive than lose any more, so I never told the police anything and didn’t pursue it,’ he said.

Meanwhile, Mrs Norrish took her son’s death hard and in November 2003 was rushed to Northam Hospital with a bowel obstruction.

No one was available to operate on her so X-rays were taken and she was transferred to a hospital in Perth.

However, Mr Norrish said doctors there instead diagnosed her with a kidney stone and didn’t realise their mistake until her bowel ruptured.

‘They said “quick sign this form, she has to have surgery right now”. As they wheeled her out her heart stopped,’ he said.

‘They resuscitated her and took her in to surgery but hours later she was dead.’

Mr Norrish claimed there was no real investigation into how his wife died and they were blocked from finding out at every turn.

‘A friend of mine chased it up but all we got was a file an inch and a half thick with a lot of it blacked out,’ he said. 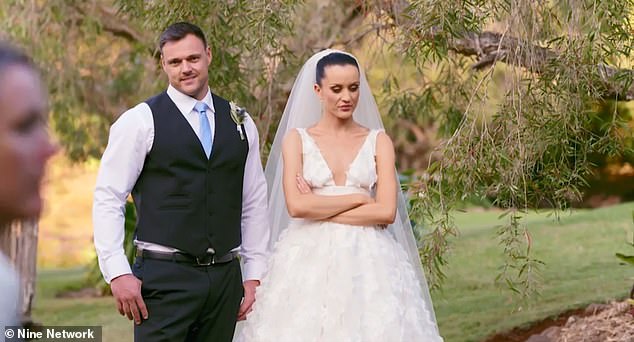 Mr Norrish said though things didn’t work out on the show for his son, he wasn’t unhappy about it as he just did it for a laugh 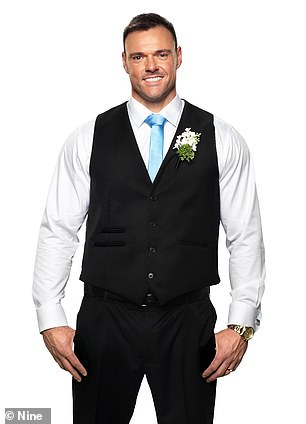 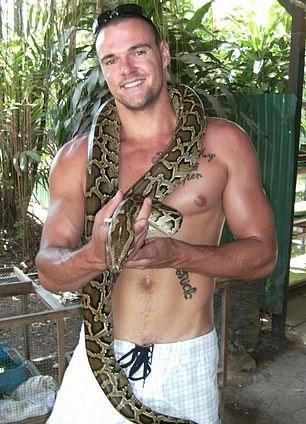 At the end of January 2010, Bronson’s sister Nateisha got married and he and his eldest brother Brodie served as ‘bridesmaids’.

Five days later on February 4, Brodie was watching TV with his wife at their home in Helena Valley, in Perth’s hills, until they decide to go to bed about 11pm.

He poured her a glass of water and went to the toilet as she went to sleep.

‘She woke up two hours later when one of the kids cried. He wasn’t there so she looked for him and found him still on the toilet,’ Mr Norrish said.

A post-mortem couldn’t determine a cause of death, with the only theory being that Brodie suffered tachycardia – his heart suddenly beating too fast – which wouldn’t show up during an examination.

He had a hemorrhoid operation three weeks before his death, but this was ruled to not be connected.

‘That’s what Bronson has lived with all these years. I don’t tell the story because people don’t believe it when I tell them,’ Mr Norrish said.

‘Bronson and I are very close. He’s come through it very well and has a great attitude to life. I’m very proud of him and will support whatever he does.’ 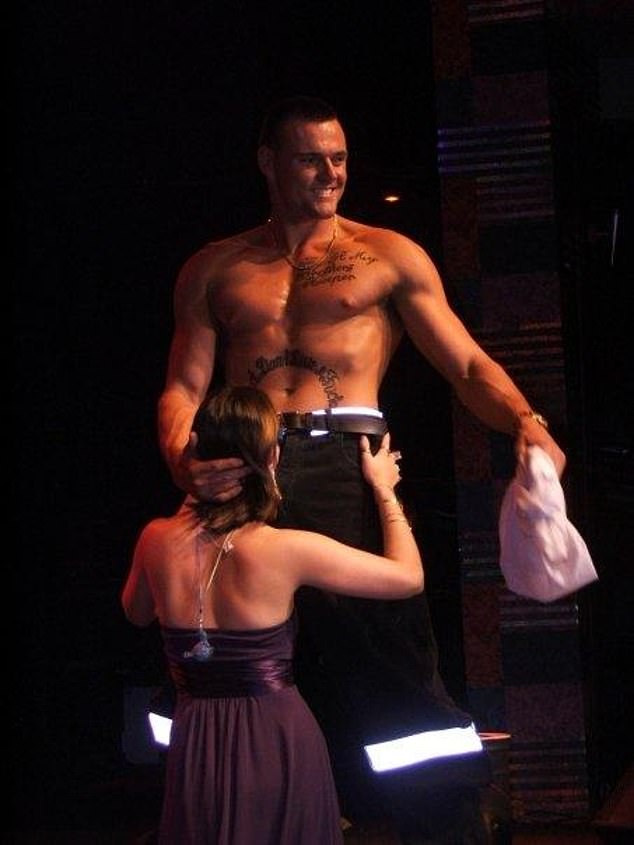 Two years after his mother died, Bronson ‘pulled his head out of it’ and got a job as a stripper, which gave him purpose

‘He and Sasha were super close and losing his mother was very tough on him too.

‘Bronson took after his mother, she was something special, she could talk to anyone in the street and was compassionate and hardworking.

‘We met in grade one and basically grew up together. She was so tough she played hockey when she was eight months pregnant.’

Mr Norrish gave an emotional speech at Bronson’s wedding to Ines on MAFS, which aired on Monday night, about the deaths in his family.

‘We’ve encouraged Bronson to enjoy life… because life is too short – especially for our family,’ he said.

‘There’s three people missing tonight. Your mother would be looking down on you saying, treat your bride with kindness and thoughtfulness.

Mr Norrish said he struggled with the death of his sons as they worked together so much that everything at his business reminded him of them.

‘It’s hard because every day I see machinery that Sasha and Brodie helped me build. No matter how many years go by it doesn’t get easier,’ he said.

‘People say to me ‘how do you keep going?’ and I said I had two more kids.’

Mr Norrish said the unanswered questions and lack of justice for the deaths of their family was also hard on him and his son.

‘It’s devastating, it eats me up inside. What happened makes me angry but it won’t bring them back and there’s not much we can do,’ he said.

‘Better to spend time with people who are still alive.’ 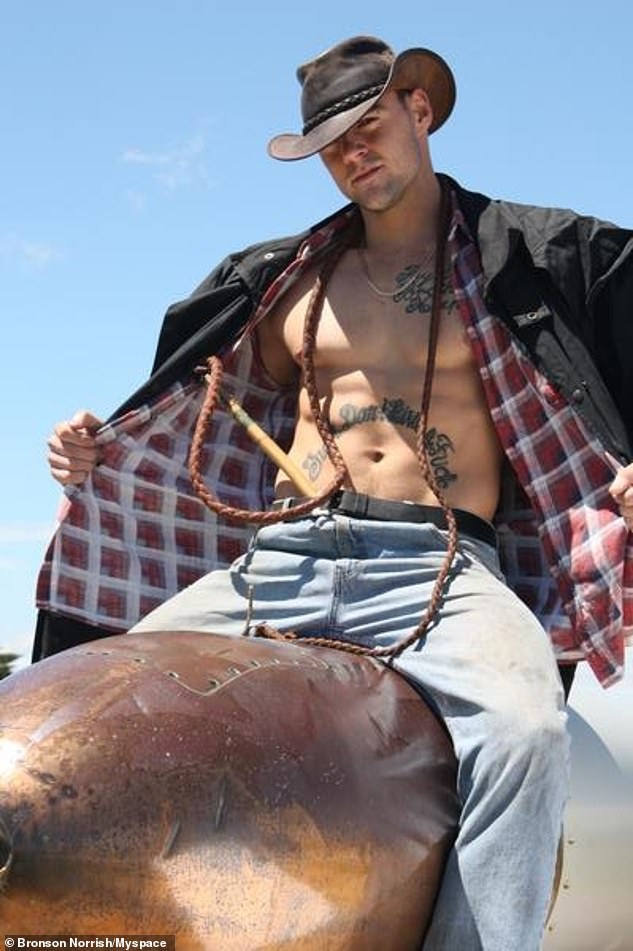 Bronson, on the day his disastrous wedding to Ines aired, spoke of his grief and how he needed to surround himself with happy people.

‘When my first brother died, I hit the bottle. And when Mum died, I went off the rails pretty hard,’ he told TV Week.

‘I disappeared for about a year and buried myself out in the bush, working on a cattle farm.’

On Mother’s Day two years after Mrs Norrish died, he ‘pulled his head out of it’ and got a job as a stripper, which gave him purpose.

‘When I found out about [Brodie], I went to work, did five shows, and bawled my eyes out in the car park afterwards. I just buried myself in work,’ he said.

Bronson said to this day whenever his phone rings unexpectedly he feels sick as he thinks someone must have died.