A science museum is pulling a sweatshirt design out of cold storage, thanks to a surprise featured spot in the latest season of Netflix’s hot sci-fi show, Stranger Things.

The purple-hued hooded sweatshirt — which bears an image of a Brontosaurus skeleton, the Greek translation of the dinosaur name and the museum’s name — was a vintage, 1980s-era Science Museum gift shop merchandise.

The Science Museum quickly tweeted that it would be re-releasing the sweatshirt, which was last sold in the gift shop during the 1980s

On Friday, the museum tweeted, ‘Stranger Things fans: Check out what Dustin is wearing in season 2, episode 1! Yes, we want one too. Working on it!’

The tweet kicked off a fandom flurry, as people quickly flocked to Twitter announce how eager they were to buy the sweatshirt and find out when it would be available for purchase.

When queried by fans about how the sweatshirt wound up on the Netflix series, the Science Museum tweeted that it had ‘no clue how they got their hands on one of our vintage shirts.’

Science Museum spokesperson Kim Ramsden confirmed to FOX29 that museum staff only discovered that the sweatshirt had been used in the show after seeing a tweet with a screenshot of it on Friday, the same day that the new episodes dropped on Netflix. 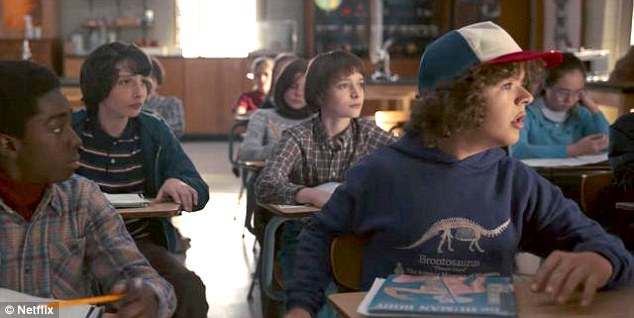 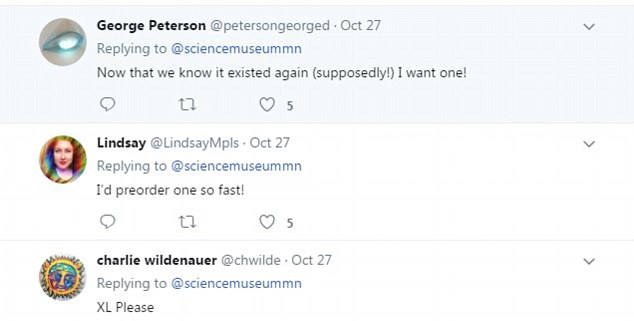 Ramsden told the Star Tribune that the museum was ‘delighted’ by all the attention it’s now receiving and noted that, ‘For those of us here in Minnesota, how cool is it to see that Minnesota connection in this national and international show?’

The Science Museum of Minnesota is urging fans to sign up for their mailing list for an alert about when the sweatshirt will go on sale. On Saturday, the museum tweeted that it would be available ‘well before’ Christmas.

Fan-created, bootleg merchandise versions of the sweatshirt design are already available for purchase on independent artist design sites including Teepublic and Redbubble.

Considering Stranger Things is set in the fictional rural town of Hawkins, Indiana, it may seem like a strange thing for one of its characters to be sporting a sweatshirt from a Minnesota museum.

While it’s generally assumed that the wardrobe department used the sweatshirt because it’s a historically accurate piece of clothing that suits the character’s and series’ vibe — the show takes place in the ’80s — some fans are speculating that the decision to use a Minnesota sweatshirt is actually part of an ‘Easter egg’ in-joke relating to series star Winona Ryder, who was born in Winona, Minnesota.