Brooke Vincent pensive ahead of weekend’s Dancing on Ice

She recently embarked on a new health and fitness regime, in preparation for her exciting appearance on ITV’s Dancing On Ice.

But Brooke Vincent looked somewhat nervous as she headed home from rehearsals on Tuesday, just five days before her first performance on the show.

The 25-year-old cut a pensive figure as she left the rink in tight-fitting sports gear – having recently revealed she dropped a stone in just 12 weeks, after overhauling her lifestyle for the reality show.

She opted for a comfy yet convenient look in a loose sports top and leggings – which drew attention to her newly slim and toned figure.

Carrying several notebooks in her arms and going make-up free, Brooke proved to be taking practice very seriously as she headed home from rehearsal.

Her hair was slicked back into a tight bun, after an undoubtedly tiring day of rehearsal, and she slung a purple and green bag over her right shoulder, in a glamorous splash of colour.

However, her preparation for the dancing programme didn’t stop her from going to work, as she was seen leaving Key 103 Studio after co-hosting the breakfast show in Manchester on Tuesday.

Making a change: The 25-year-old stepped out of the studios on Monday after recently revealing the results of her lifestyle change by sharing an impressive shot on Instagram

Brooke’s notebook was close at hand once again, as she stepped out in a large grey hoodie which perfectly contrasted her skin-tight burgundy leggings – clearly preparing for another day at the rink.

She completed the outfit with grey leopard print Nike trainers, which had electric pink highlights.

On Monday, the reality star proudly displayed her newly-toned frame on Instagram – where she revealed to followers that she had dropped a stone in just 12 weeks, after giving up smoking and junk food. 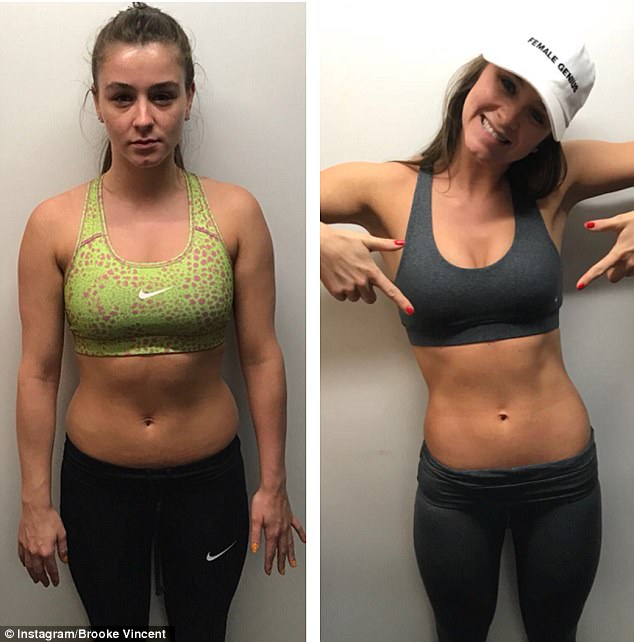 Toned: The reality star proudly displayed her newly-toned frame on her Instagram post on Monday, where she revealed to followers that she had dropped a stone in just 12 weeks

Brooke was the picture of confidence in the image taken after her transformation, which saw her playfully point down to her lean physique.

Clad in just the sports bra and gym leggings, the brunette left her enviably toned stomach and tiny waist on show, as she beamed with pride for the camera.

Sharing the image beside one taken twelve weeks ago, the impressive difference was clear for followers to see –  with Brooke owing the transformation to a newly gruelling fitness regime. 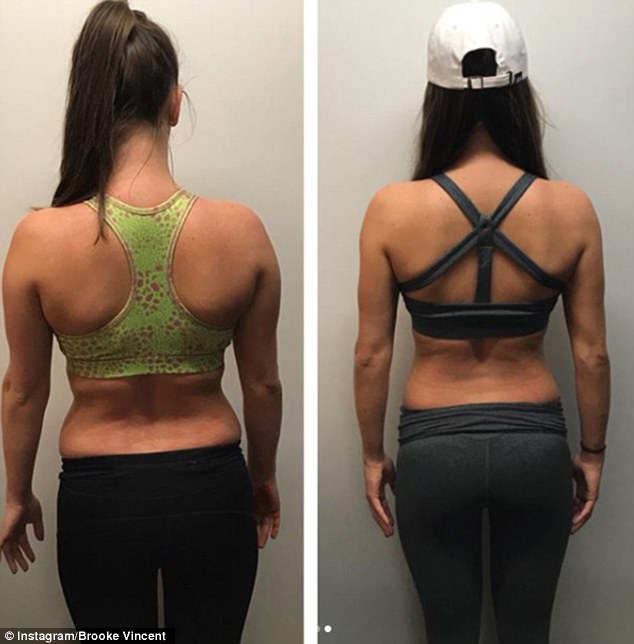 Transformed: Clad in just the sports bra and gym leggings, the brunette left her enviably toned stomach and tiny waist on show, as she beamed with pride for the camera

Having completely overhauled her lifestyle, she wrote in the caption: ‘This picture is no way the finished product. It’s just what happens when you cut out all of the rubbish you eat.’

She then confessed that giving up cigarettes had been the biggest life-changer, adding: ‘I’m not going to lie I’ve not been perfect, but taking out my smoking was the biggest health improvement I could have done.

‘I never thought I would able to give up, I really NEEDED something to turn to. And now that I’ve actually completed it, I’m so proud of myself. 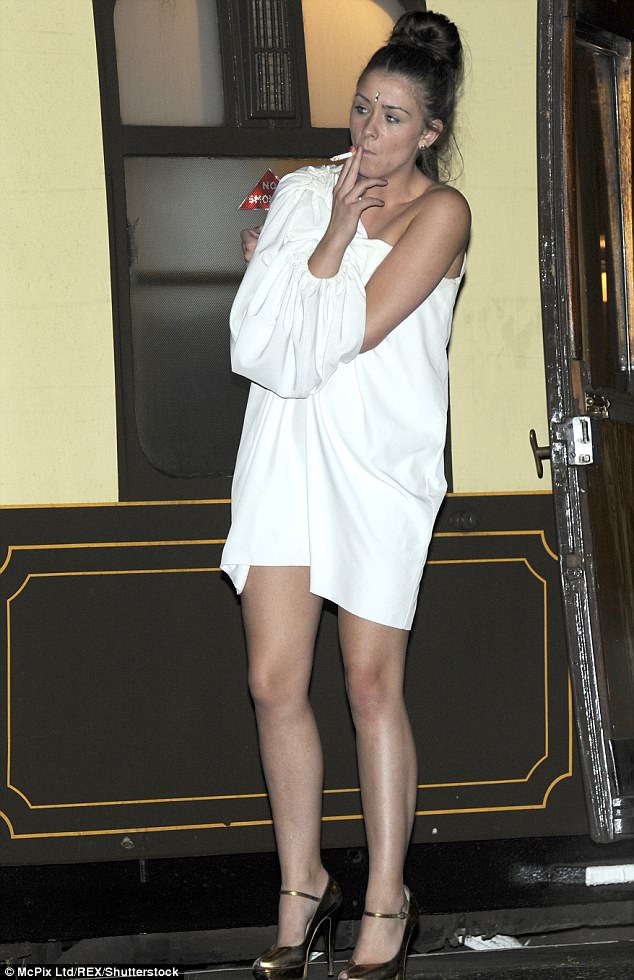 ‘I never thought I would be able to give up’: She admitted giving up cigarettes had been the biggest life-changer, and that she is ‘so proud of herself’ for ditching them (pictured in 2010)

‘Mainly from the smoking aspect, but more so because I never thought I was strong enough to take something so seriously and stick it out… This is my 12 week transformation.’

She went on to reveal she had shed a stone in just three months, and was able to fit into a dress she bought at the age of 19.

While she oozed confidence in the photo, she also addressed the negative affect of social media on young women – and urged her followers not to believe everything they see online. 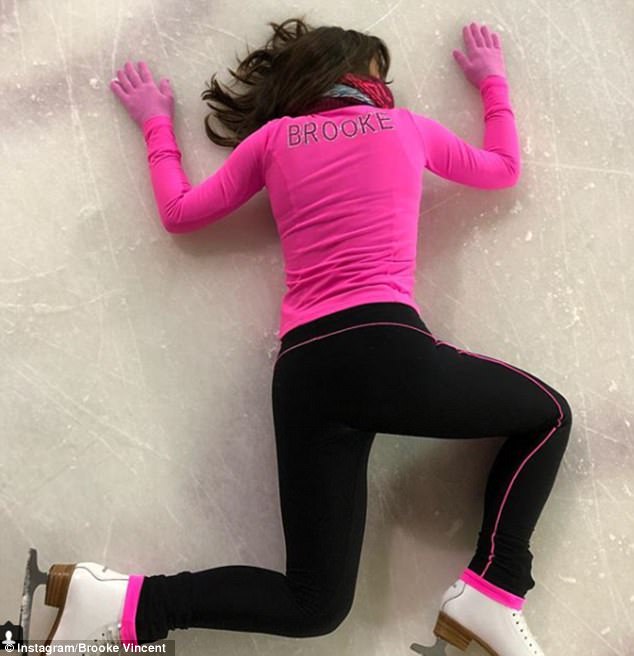 Leading lady: The actress revealed her plans to slim down after she was confirmed for the 2018 Dancing On Ice line-up late last year (above)

She said: ‘Honestly why put an unflattering/’FAT’ picture of yourself up?.. You don’t need to because ‘social media’ is the place where everybody makes everybody makes out everything is so perfect.

‘It’s in the comfort of having filters,effects, airbrushing tools that somehow we feel most at home, about showing everybody what we look like, when in reality it’s much different..’

The actress revealed her plans to slim down after she was confirmed for the 2018 Dancing On Ice line-up late last year. 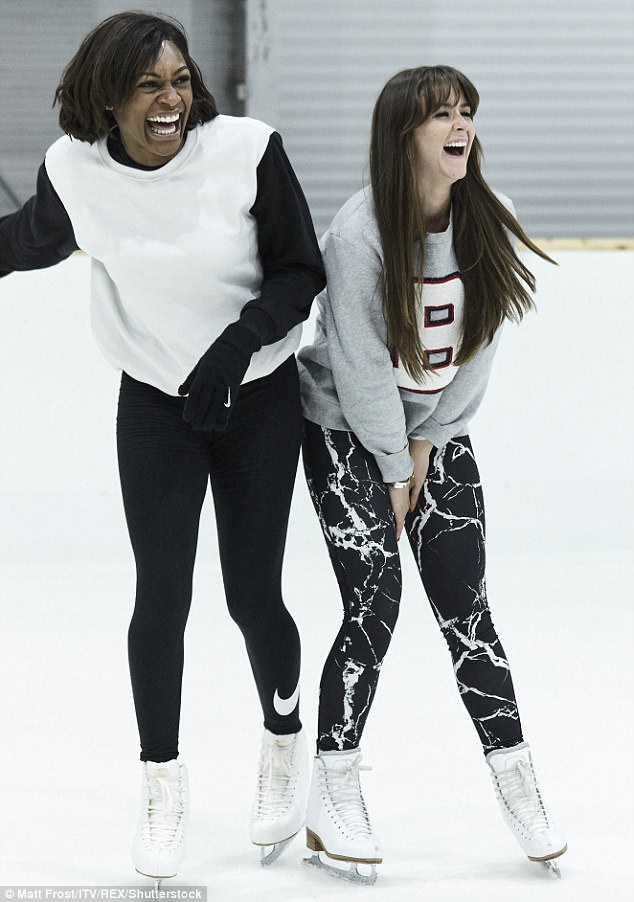 Big debut: Brooke will perform for the judges for the first time with partner Matej Silecky this coming weekend (pictured in rehearsal with fellow contestant Perri Shakes-Drayton)

Brooke appeared in a group dance during the launch show on Sunday night, but will perform for the judges for the first time with partner Matej Silecky this coming weekend.

Appearing on Loose Women last week, the beauty confessed she was incredibly nervous for her first go on the ice – despite weeks of gruelling training sessions.

She said: ‘I left home yesterday to travel down and my boyfriend dropped me to the station. I was like, ‘Please don’t let them take me! Say I’m poorly!’

‘Anything can happen [during the show]. I don’t know what’s gonna happen… I could fall over. As I said before, I don’t know I’m falling until I’ve fallen.’ 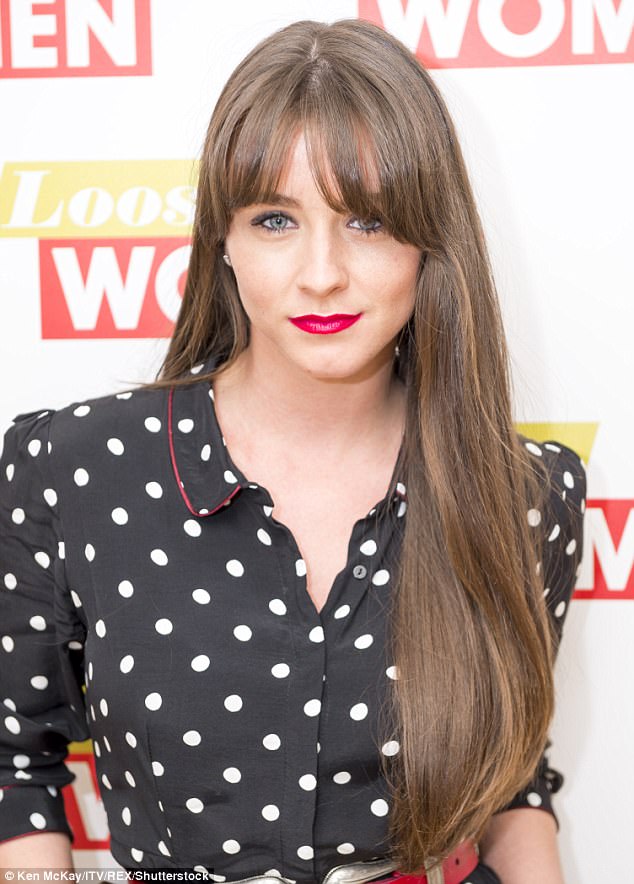 ‘Anything could happen… I could fall over’: Appearing on Loose Women, the beauty confessed she was incredibly nervous for her first go on the ice – despite weeks of gruelling training sessions