A brother and sister both battle the incredibly rare ‘Benjamin Button disease’.

Michiel, 20, and Amber, 12, Vandeweert, of Diepenbeek, Belgium, suffer from the genetic condition progeria, which causes them to age eight-to-ten times too fast.

With the disorder affecting just one in every four-to-eight million people worldwide, the siblings make up two of the 155 known cases.

Most patients die at only 12 years old, with the siblings already experiencing problems with their bones, teeth and hair.

But the pair show no signs of slowing down with Michiel loving to race on his GoKart and Amber being a keen dancer.

They have even set the goal of being the longest living progeria sufferers ever, with the current record being 26 years old.

Siblings Michiel and Amber Vandeweert both battle the incredibly rare ‘Benjamin Button disease’. The condition – known as progeria – causes sufferers to age too fast and affects just one in every four-to-eight million people worldwide. They are pictured last December 1 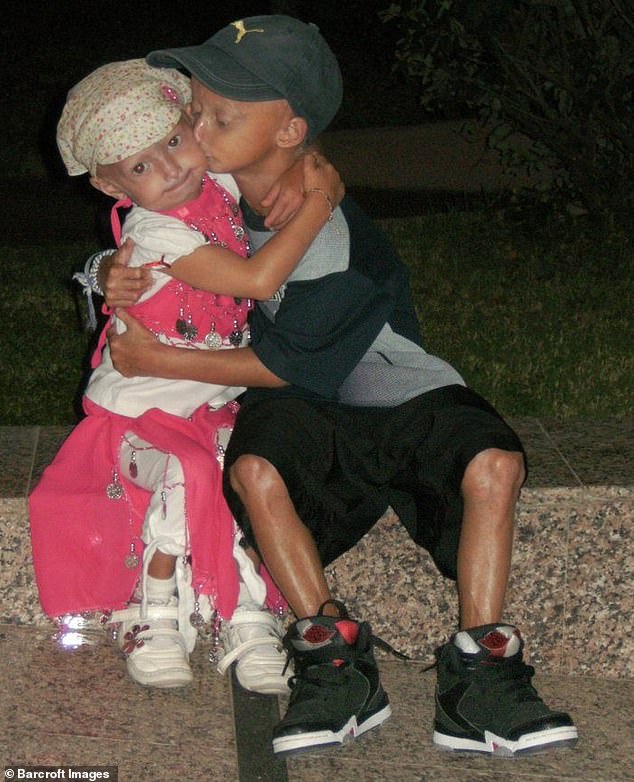 While they endure cruel stares and comments from bullies at school, the siblings support each other through the ordeal of having such a rare disorder. Michiel enjoys being the ‘big brother’, with Amber being able to turn to him if she ever has a question about their shared condition 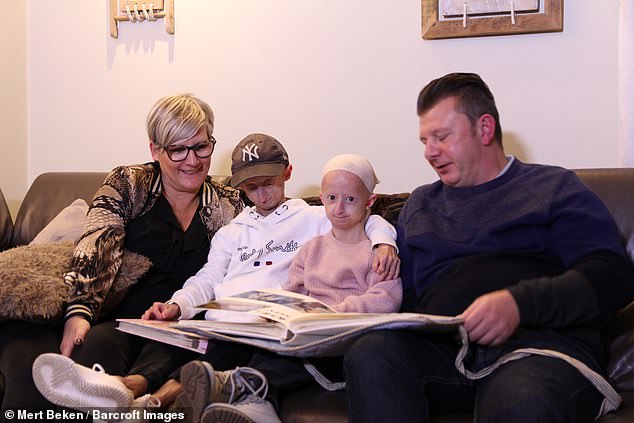 Their parents Wim and Godelieve Vandeweert (pictured with their children on December 1) were keen to expand their family after Michiel was born and were told it was almost impossible they would have another child with progeria. Amber was diagnosed at just seven weeks old

Michiel – who stands at just 4ft 1inch – said: ‘Progeria has affected our hair, bones and height – just like old people. They say the rate you can get progeria is one-in-eight million, so it’s extremely rare.

‘They also say the life expectancy of someone with progeria is 12 years old, but we are taking medicines from America and hopefully these should extend people’s lives by two years.

‘Saying that, I’m now 20. So you know, that time has thankfully passed for me.’

The average life expectancy for a child with progeria is about 12 years, but some with the disease die younger and some live 20 years or longer.

There’s no cure for progeria, but ongoing research shows some promise for a treatment.

Michiel was diagnosed at eight months old after his parents Wim and Godelieve Vandeweert took him to a children’s care centre where doctors noticed he seemed different.

Speaking after Michiel’s diagnosis, Mr Vandeweert said: ‘When he turned five years old, he was changing.

‘Losing his hair, not getting teeth and not gaining any weight. It was a big shock for us.’

Keen to expand their family, the parents were then told it was almost impossible they would have another child with the condition.

‘We always thought about having two children. But when Michiel was born, we questioned ourselves,’ Mr Vandeweert said.

‘You can’t inherit it from your parents and so it’s very unlikely to have two children with progeria.

‘We knew it had happened before but with a twin from the same cell.’

When Amber was born, the parents asked doctors to run some tests just to be on the safe side. Seven weeks later, they found out she too had progeria.

‘The first few days were very hard, but we had a great support system around us to help us through that time,’ Mr Vandeweert said. 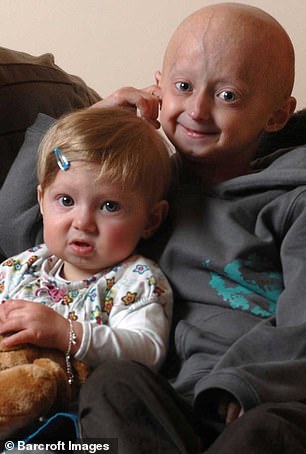 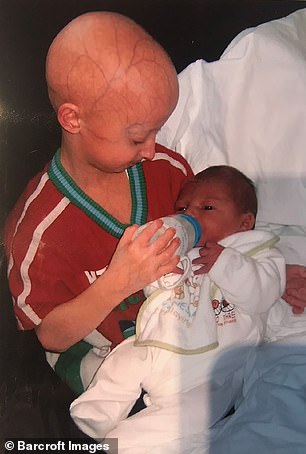 Michiel was diagnosed at eight months old after doctors noticed he seemed different. To be on the safe side, his parents asked doctors to test Amber for progeria shortly after she was born. Amber is pictured right with her brother as a newborn and left as a toddler 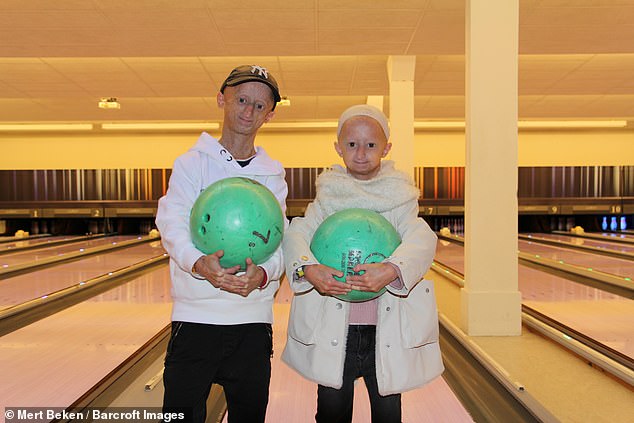 While enduring cruel stares and comments from bullies at school, the siblings are always there for each other.

‘I would definitely say we’re each other’s best support. We both know what it’s like, better than anyone,’ Michiel said.

‘If Amber ever has a question, she can always come to me. It’s nice that I still get to be the big brother. Because if Amber didn’t have progeria she would be a lot bigger than me already.’

Although they refuse to let their condition hold them back, the pair have not always found life easy.

‘Kids see that we’re different,’ Michiel said. ‘They start to make fun of you. But I always stood my ground and never backed away.’

Amber – who is 3ft 7inches tall – added: ‘Last year I had some difficulties in school – I said I wanted to be like a normal person and people bullied me because of that.

‘Thankfully, that has been resolved now and school is going really well for me at the moment. They take good care of me.’ 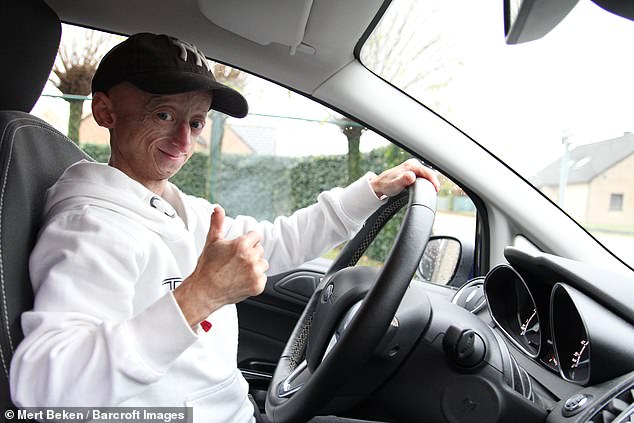 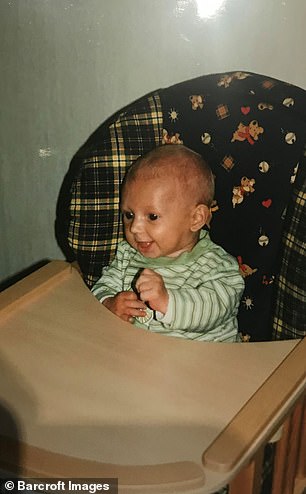 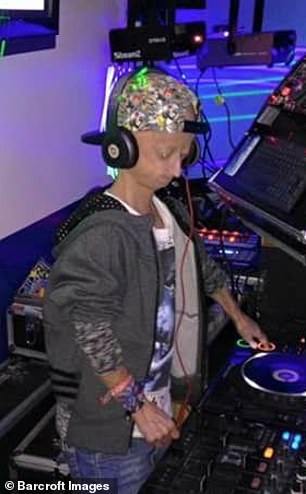 Michiel is pictured left as a baby, shortly before he was diagnosed with progeria. Keen to live as a full a life as possible, the now 20-year-old used to be a DJ (seen right) 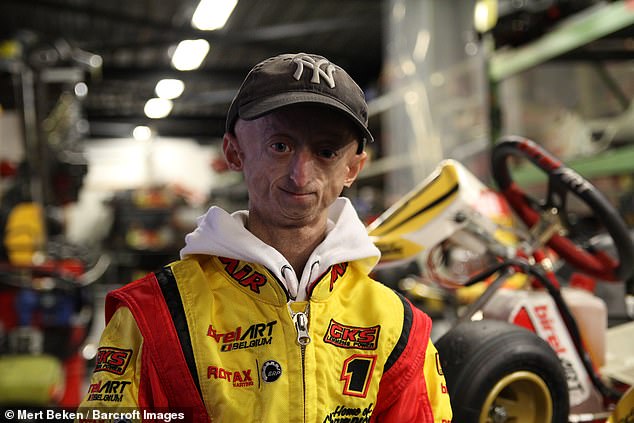 The siblings are also often stared at when out in public, but try to take it in their stride.

‘When they stare, that’s okay when they just look and go forward,’ Michiel said.

‘But sometimes they just keep looking, that’s when it’s annoying. There’s a big difference between the two.’

As well as having each other, the siblings also have a large circle of supportive friends.

‘They look through the disease,’ Michiel said. ‘They don’t see the progeria part of us. They see us and our personalities.’

One of their close friends – Ruben Gysemberg – has been with the siblings every step of the way.

‘In the beginning, it was quite weird,’ he said. ‘But then I got to know both Michiel and Amber – we have always treated them like everyone else.

‘They both handle everything so well. They have learnt to live with it.

‘We now have a really good understanding of their condition too. Because as friends, we talk about it a lot.

‘When they are not feeling well, we notice this. So yeah it’s really nice how close we have become.’

Although Michiel and Amber have both experienced the ups and downs that come with having such a rare condition, they both live life to the full.

The pair regularly go bowling with friends. Michiel can also drive and used to be a DJ in his spare time.

‘I think we can both say we are very proud,’ Amber said. ‘You just have to be the person you want to be and embrace yourself no matter what.’

Michiel, who hopes to reach 30, added: ‘We just try to live for the moment but we definitely both have more things we want to strive for.

‘I am very proud to have made it to 20 years old. I think the oldest child ever with progeria was 26 – so now, I’m going to try and beat that!’