Two-time Brownlow medallist Nat Fyfe took the opportunity to thank his girlfriend when delivering his acceptance speech on Monday night.

The Fremantle superstar acknowledged the difficulties WAGs face when dating sportsmen, and said his relationship was no different.

In fact, the Dockers captain said he knew it must be difficult for his girlfriend, Elli Brashaw, to be in a relationship with him.

The 28-year-old, who first brought Ms Brashaw along as his partner during the 2016 Brownlow Medal, thanked her for her unwavering support and dedication both to him and his career.

‘To my partner Elli and her family, thank you for everything you do for me. You keep my feet on the ground,’ he said.

‘Being the girlfriend of an AFL player is not an easy task.

‘And being a girlfriend to me is not an easy task, but without your support there is no way I could be in the position I am today.’

The public show of gratitude was a rare move for the relatively private couple.

Ms Brashaw shares an annual photo of the pair to her public Instagram page after the Brownlow every year – a tradition she began after receiving her first invitation.

Other than that, the exercise physiologist, who specialises in musculoskeletal rehabilitation, and her superstar beau maintain a low profile. 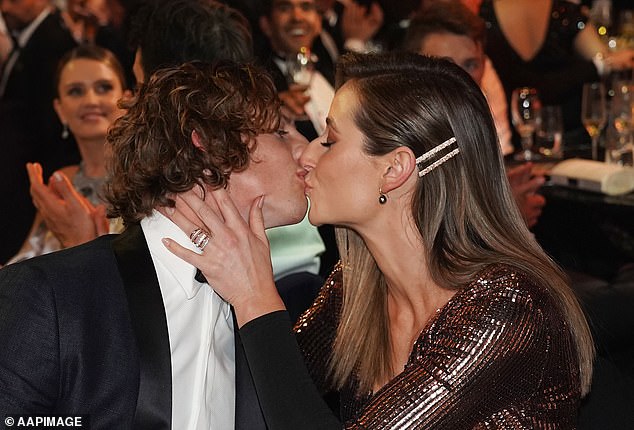 The Fremantle superstar, who also took home the prestigious award in 2015, was strongly fancied to poll well on Monday night 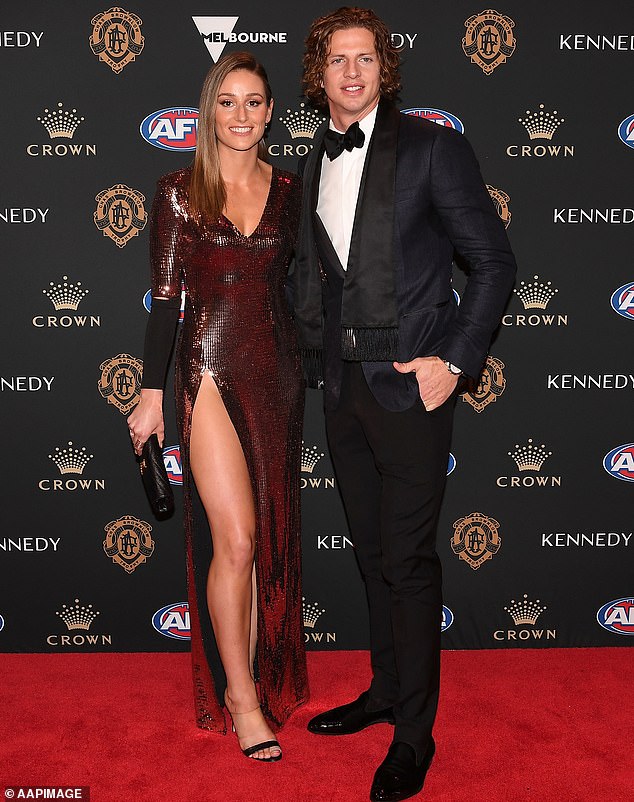 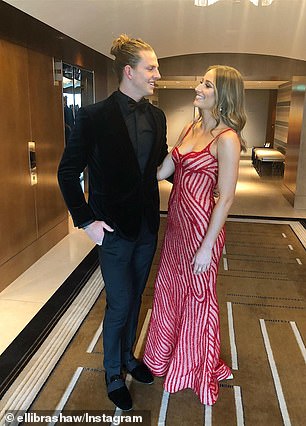 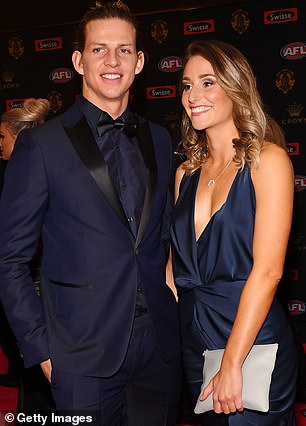 Fyfe has gained somewhat of a reputation for delivering impressive speeches.

While accepting his first Brownlow medal in 2015, the then 24-year-old was praised for delivering ‘the best Brownlow acceptance speech of all time’.

His comedic, self-depreciating approach to the prestigious award was well received by the public and by other attendees.

WHO IS NAT FYFE’S LEADING LADY?

The Fremantle captain was first linked to exercise physiologist Elli Brashaw in January of 2016.

The pair were spotted at the Hopman Cup and later confirmed their relationship when she attended the Brownlow Medals with him that year.

Since then, the couple have maintained a relatively low profile.

Ms Brashaw has been employed as a physiologist with a particular interest in musculoskeletal rehabilitation for two years, after completing her Honours degree at Murdoch University in 2014.

Her career profile describes her as a ‘super friendly’ person with a keen interest in sport.

During the 2019 ceremony, the the Fremantle captain took a more serious approach, thanking teammates and the coach that led him to so much success for the past eight years.

His club had a rough season this year – making his Brownlow win all the more memorable – and parted ways with his coach of eight years, Ross Lyon – who was sacked before the season’s end.

‘I wish he [Lyon] was here tonight,’ Fyfe said. ‘He took us to preliminaries and a grand final. I won a Brownlow while playing for him and a second now.

‘He’ll be a close friend of mine into the future, a close confidant.’

Lyon told Fyfe he was getting complacent with his training, sparking a desire to prove him wrong.

‘As recently as last year, about December, I was just going through the motions with my training and preparation with the idea of playing more footy towards the back end of the season,’ Fyfe said.

‘He challenged me to say, ”You’re cruising, I don’t think how you’re performing and preparing at training is up to standard, I think you’ve got more in you”. That was a spark to really get going.’ 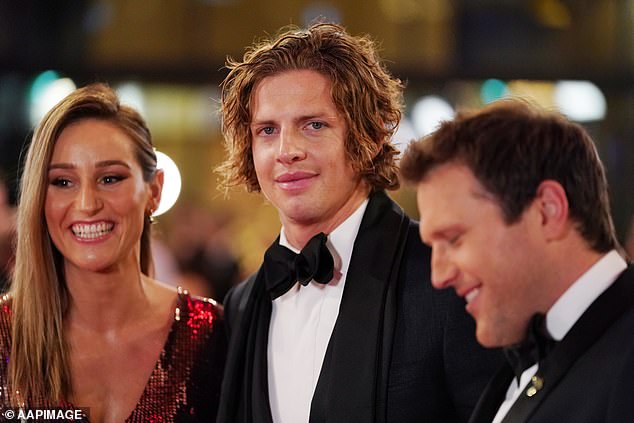 The 28-year-old, who first introduced Ms Brashaw as his partner during the 2016 Brownlow Medals, thanked her for her unwavering support and dedication both to him and his career 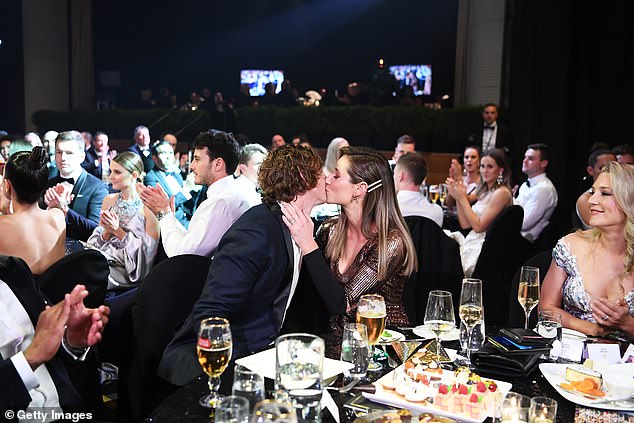 Fyfe said he met a Pilates instructor named Trudy in July of 2018 who assisted in his recovery and helped shape his successful season.

‘Two hours a week, every week since November last year (I worked with her) and I got through the year with no soft tissue damage,’ he said.

Fyfe said he met Trudy in the street, after she approached him and told him he would benefit from her services.

During his speech, he also urged fans to stick with his club as they continued to build.

The talented midfielder stormed to the front mid-way through the count, which was over when he took an unassailable lead by round 21, finishing with 33 votes.

Fyfe has now polled more Brownlow votes than games he has played in his career – only the second player in the history of the VFL/AFL to achieve the feat. 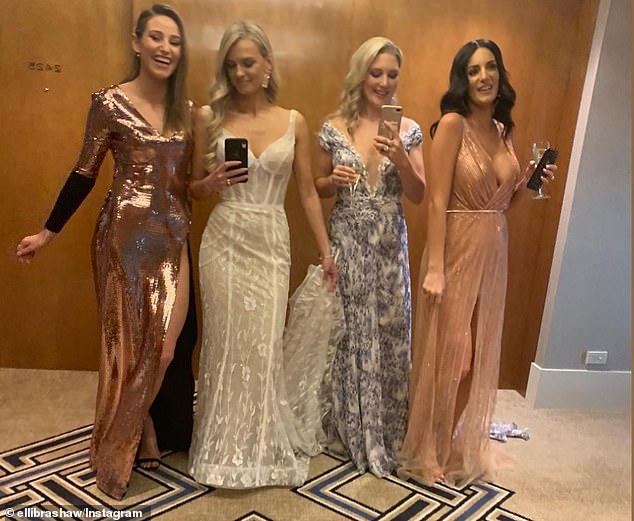 Ms Brashaw uploaded a photo to Instagram posing with other WAGS at the Brownlow Medals (Pictured: Lily Pittard, Marnie Walters and Sally Mundy) 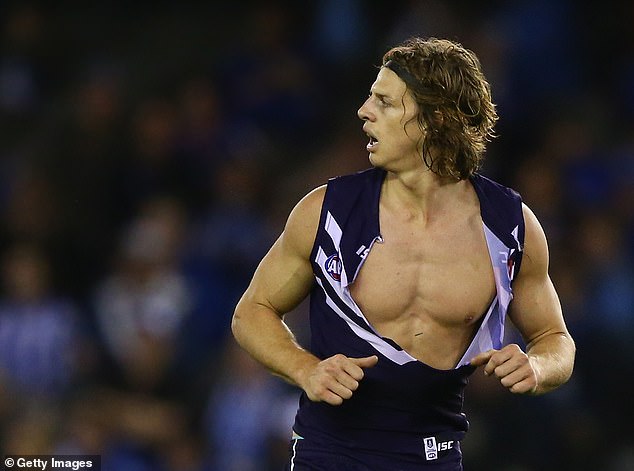 The Dockers captain was described as a stand out for the team throughout their entire season, which was underwhelming at best

Fyfe’s win made him the first dual winner of the medal since Gary Ablett in 2013.

During his acceptance speech, he said his successful season was partially driven by a need to prove he could bounce back after recent seasons were marred by injury.

‘I really pride myself on my prep, I know if I prep as well as I can… Since I broke my leg in 2015 and 2016 there’s been question marks about whether I would get back to my absolute best,’ he said.

‘Those question marks really motivated me.’

Just two weeks ago after his 2019 season drew to a close, Fyfe underwent his 17th surgery of his career – this time for an injured shoulder which had already undergone three prior reconstructions. 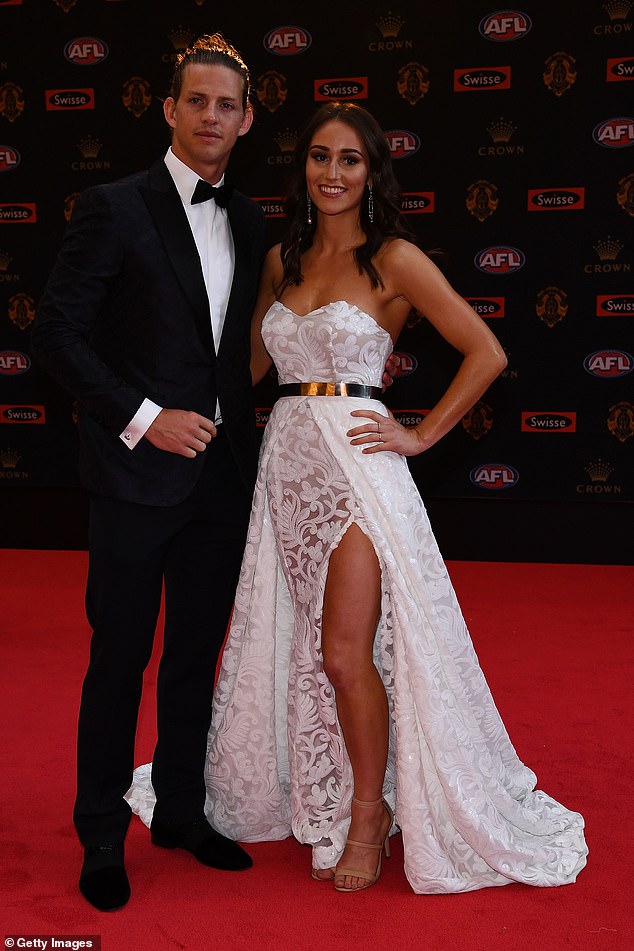 Ms Brashaw shares an annual photo of the pair to her public Instagram page after the Brownlows every year (pictured: 2017 Brownlow Medals) 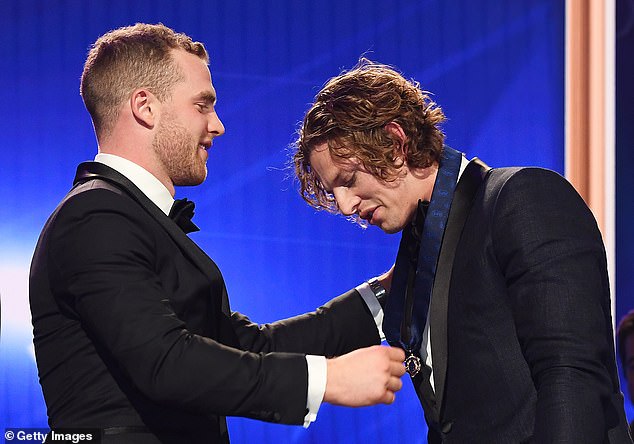 ‘To the Fremantle Footy Club – to our players. Brownlow Medals aren’t won on your own,’ Fyfe said as he accepted the award.

‘To my family, mum, dad, my brother… My aunties and uncles in Perth that look after me. Thank you for the upbringing I’ve had.’

The Dockers captain was a stand out for his side throughout the season, which was underwhelming at best.

The club only recorded nine wins.

Fyfe was also named the captain of the All Australian Team this season, marking his first appearance on the team since 2015.

In 2015, the 24-year-old midfielder claimed the award with an impressive 31 votes  after he played in the preliminary final with a broken leg. 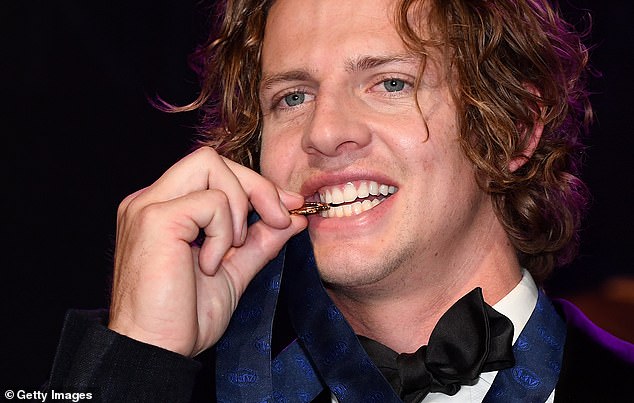 During his acceptance speech, he said his successful season was partially driven by a need to prove he could bounce back after a few seasons marred by injury and surgery

The win that year made him the first Fremantle player to win the Brownlow in the club’s history.

Shortly afterward he was interviewed by veteran sports commentator Bruce McAveney, who joked about Fyfe’s unconventional training methods growing up.

‘As a young boy I read you didn’t take a footy to bed, you took a notepad to bed because you were so interested in strategies. This is pretty weird stuff,’ McAveney said.

Fyfe also thanked his family for their help throughout his career, but joked about his upbringing in a small town in Western Australia.

‘I’m sort of painted as a bit of a country hillbilly, I’m trying to move away from that if I can.

‘My family have been nothing but supportive all the way through, of everything but my hair.’ 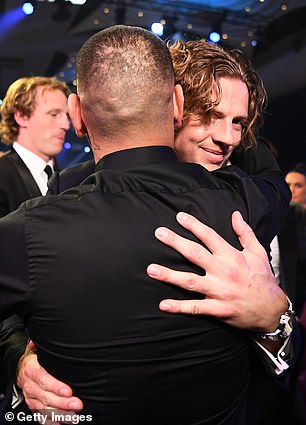 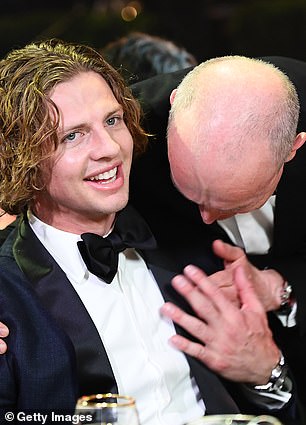 He stormed to the front mid-way through the count, which was over when he took an unassailable lead by round 21, finishing with 33 votes 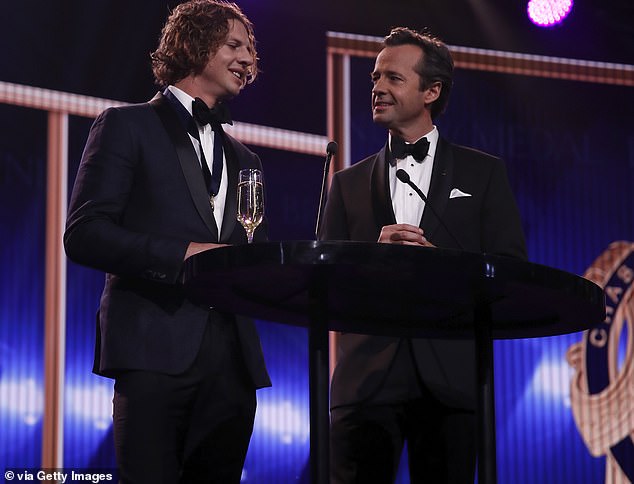