This is the terrifying moment a bloodied and dazed truckie was saved by police and quick-thinking strangers after a horror crash sparked a 50 metre fire wall.

Officers were called to the crash on the Bruce Highway in Gindoran, north-east Queensland, at 11:15am on Wednesday after three trucks and a ute collided.

Horror footage showed officers arriving to the scene with the road covered in fog and witnesses quickly rushing to tell an officer that a truckie was laying close to huge flames.

When police arrived on the Bruce Highway at 11:15 on Wednesday they were confronted with a huge wall of flames (pictured)

The police officer approaching the truckie who put out his bloodied hand, before they realised he wasn’t able to move.

‘We need to get further away from this truck, we’re going to have move you okay,’ the officer said.

‘You’ll be alright mate, you’re going to make it.’

The driver was then carried by several good Samaritans and an officer using a large blanket as a make-shift stretcher.

With the first driver safe, police located a second man just metres from the flames and lifted him into the back of a 4WD before driving him to safety.

Both drivers were airlifted to the Royal Brisbane and Women’s Hospital with one man, 42, in a critical condition and another man, 54, in a serious condition. 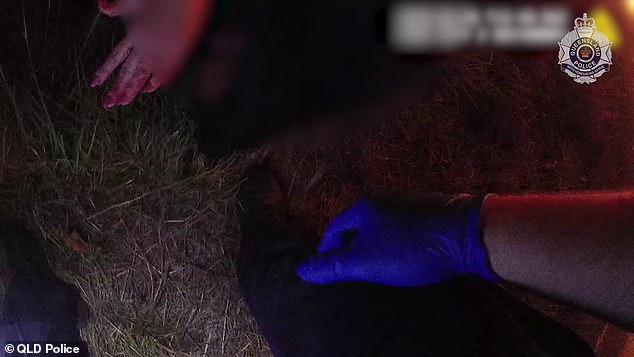 As police approached the bloodied truckie he put out his hand to the officer (pictured) before the cop told him ‘you’ll be alright mate, you’re going to make it’

A veteran truckie, who was on the scene even before police arrived, described the moment he came across the terrifying scene decided to take action.

The man, who wished to remain anonymous, pulled one of the burning truckies out of the flaming wreck ’cause it’s just what you do,’ according to The Observer.

‘Me and a few other drivers went down there and got him out of the cab and the other driver crawled out of his truck but he was burning, he was alight.

‘We dragged him around and back up through to the top of the road and went to help the other bloke, who was still burning but we managed to put him out.

He said emergency services arrived moments later and they took over.

Queensland Police praised motorists first on the scene for providing urgent first aid to the injured. 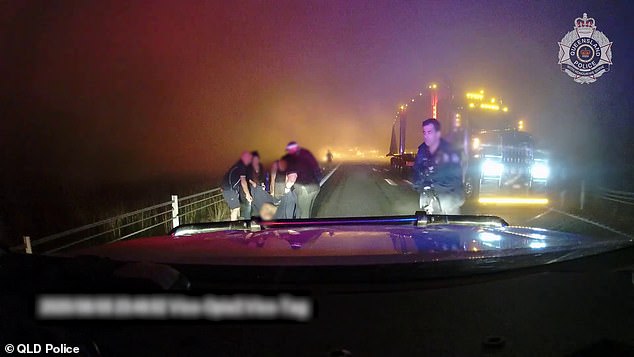 Police said the crash first began when a ute towing a caravan slowed down in heavy fog and pulled over to the side in an attempt to get out of the way.

A truck towing two trailers and travelling in the same direction clipped the ute and the caravan and the pair pulled over before moving off.

But as the truck moved off a second, which was also carrying two trailers, ran into the back of it.

A third truck then smashed into the rear of the second truck and they both caught fire which then erupted into a huge blaze.

Police are now urging anyone who witnesses the crash to call Crime Stoppers on 1800 333 000. 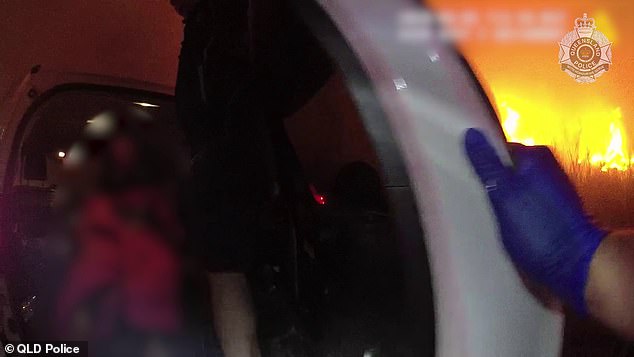