Cut into pieces for profit: Brutal image shows mutilated elephant with its tusks and trunk cut off by ivory poachers in Botswana where hunting ban was lifted in May

A disturbing photograph of a mutilated African elephant with its severed trunk still next to it shows the horror of ivory poaching in northern Botswana.

The drone photograph, called ‘Disconnection’, was taken by documentary filmmaker Justin Sullivan and comes after Botswana lifted a ban on hunting the animals in May.

Poachers use chainsaws to cut off the trunk and tusks of the elephants and the shocking photo shows how animal carcasses are just abandoned by hunters.

Another brutal photo shows the inside of the elephant’s head after it was killed by the ivory poachers.

Poaching in Botswana is increasing rapidly, with an estimated 593 per cent rise in the number of carcasses in the Northern parts of the country from 2014 to 2018.

The photograph has now been selected for the prestigious Andrei Stenin International Press Photo Contest, the results of which will be announced in September.

Justin, 28, from Cape Town, South Africa, said he was filming for a private company in Botswana and overheard rangers talking about the poached elephant.

He said: ‘They said an elephant had just been poached and I asked to be taken to the site. On arrival I used a drone to capture the image.

‘The image is called ‘Disconnection’, the perspective of the image gives context to the situation which you would never be able to see from the ground.

‘The high angle looking top down shows isolation and highlights not only the physical disconnection of the animal, but our disconnection from the situation. 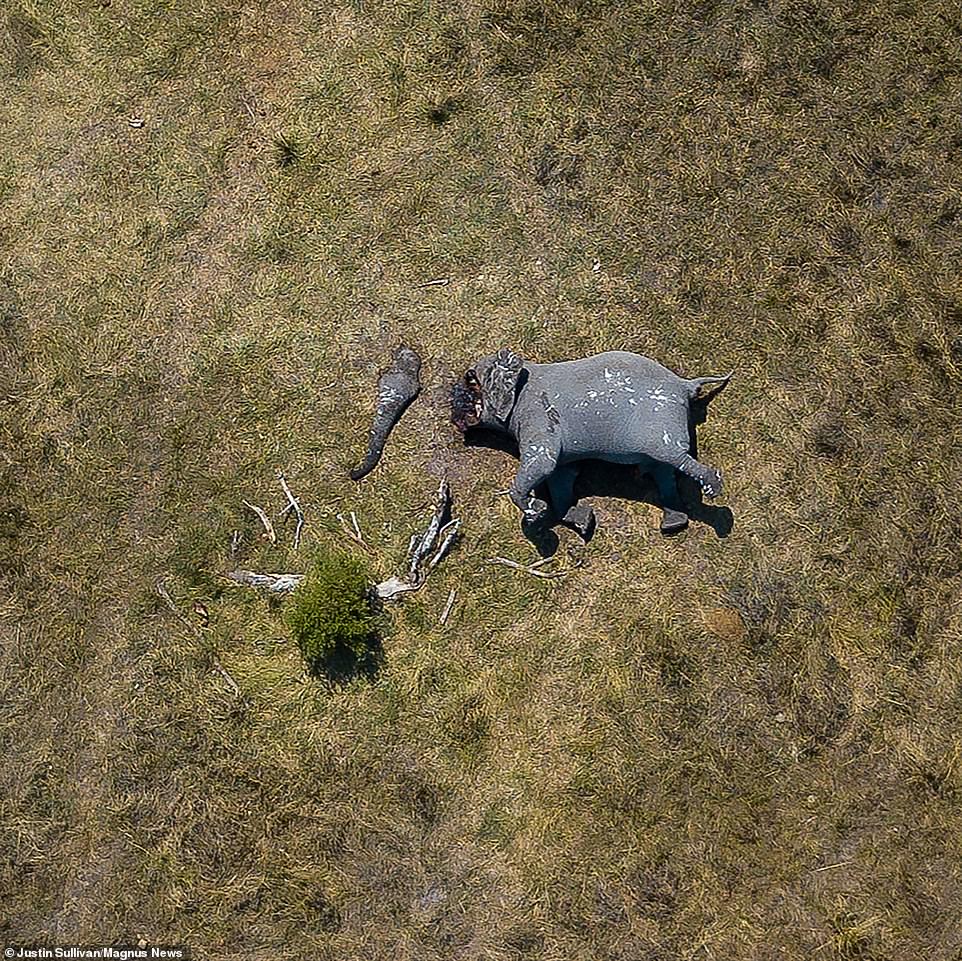 Poaching is rising rapidly in Botswana. Poachers use chainsaws to cut off the trunk and tusks of the elephants and the shocking photo shows how animal carcasses are just abandoned by hunters

‘The image has drawn a lot of attention. People have obviously reacted with mixed feelings of anger and sadness, especially with the recent lift on the hunting ban in Botswana, but this photo has driven some constructive dialogue around how we can promote more sustainable elephant conversation and solve our current ecological crisis.’

The photo comes after a leading conservation group warned of surging elephant poaching in parts of Botswana and estimated nearly 400 were killed across the country in 2017 and 2018, according to a report published Thursday, adding to conservation concerns.

The Elephants Without Borders research in the scientific journal ‘Current Biology’ will likely increase pressure on Botswana, which last month sparked sparked controversy by lifting its ban on hunting. 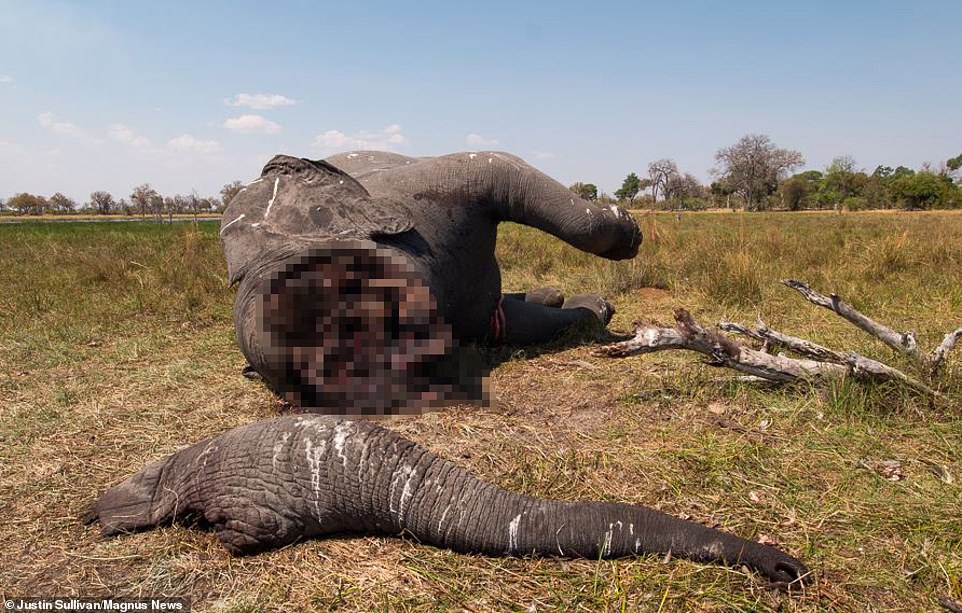 Nearly 400 elephants were killed across the country in 2017 and 2018 after Botswana President Mokgweetsi Masisi lifted the country’s five-year ban on elephant hunting, citing increasing ‘conflicts between humans and elephants’

The government said it would help control a booming population that was damaging farmers’ livelihoods.

Thursday’s report noted a 593 per cent increase in fresh elephant carcasses in the north of the country since 2014, with many of these found clustered in five northern ‘hotspots’.

‘This evidence suggests that ivory poaching on the scale of hundreds of elephants per year has been occurring in northern Botswana since 2017 or possibly earlier,’ the report said.

EWB last year said it had identified nearly 90 elephants thought to have been poached after an aerial survey, a number that was vigorously contested by the government.

The country, which has the largest elephant population in Africa, has previously been a haven for elephants with ‘little poaching reported’ in a 2014 survey.

This decision provoked an outcry from environmental protection organisations.

Botswana’s abundant wildlife has made it a popular luxury safari destination and tourism is the second fastest growing sector of the country’s economy after diamond mining.