BT and Nokia have withdrawn from the Mobile World Congress (MWC) because of the coronavirus, amid rumours the tech showcase event could be cancelled entirely.

Nokia and BT are the latest to withdraw from MWC 2020, which is due to take place in Barcelona from February 24 to 27, because of the deadly outbreak.

Both companies announced their decisions on Wednesday, following the leads of Amazon, LG, Sony, Intel and Facebook, who have also withdrawn from the event.

Organisers of the MWC will decide on Wednesday whether to cancel the event entirely, according to sources cited by Reuters.

GSMA are desperate to cancel MWC and are pleading with Spanish authorities to declare a health emergency so they can claim on insurance, according to Wired.

An operator at the entry of the Fira Barcelona Montjuic centre in Barcelona, Catalonia, 12 February 2020, where the Mobile World Congress (MWC) is supposed to take place from 24 to 27 February. Reports suggest the event will be called off entirely due to the coronavirus and the large number of companies that will no longer be attending

BT said withdrawing from the event was the ‘most responsible decision’ it could make.

‘After careful discussions and planning, BT has decided that we will not attend GSMA Mobile World Congress Barcelona 2020,’ the company said in a statement.

‘We value our participation in important industry groups like GSMA and deeply respect the steps they have already taken to protect attendees. 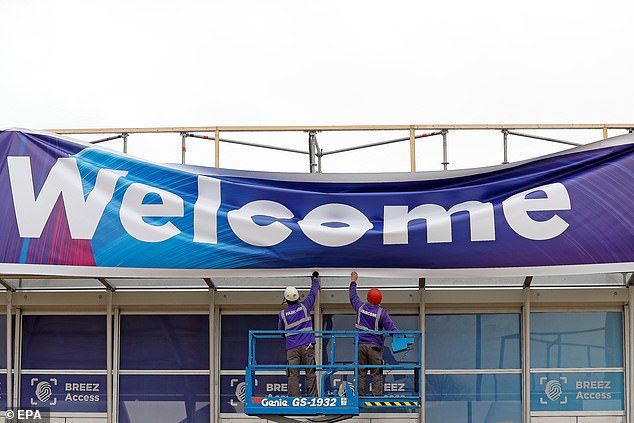 Operators install a welcoming placard at the entry of the Fira Barcelona Montjuic centre in Barcelona, 12 February 2020 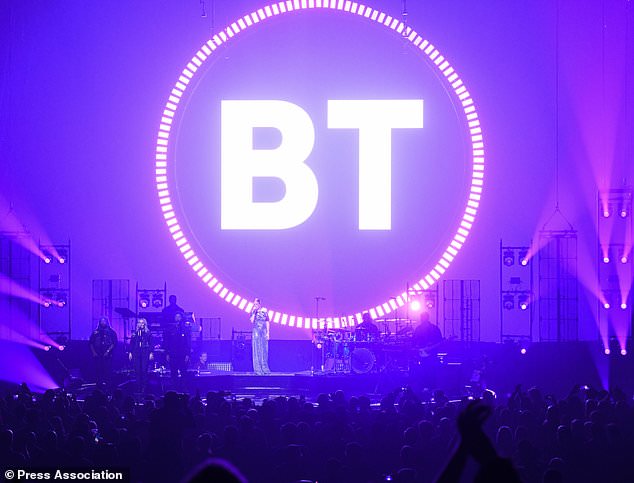 BT and Nokia have withdrawn from the Mobile World Congress event in Barcelona, joining a growing list of big tech companies that won’t be there

‘Unfortunately, the most responsible decision is to withdraw our participation from the event to safeguard our employees and customers.’

Nokia said it had taken the decision to withdraw from MWC 2020 after a ‘full assessment of the risks related to a fast-moving situation’.

‘Primary focus has been to safeguard the health and well-being of employees and others while also recognising responsibility to the industry and customers,’ the company said in a statement.

‘The conclusion of that process is that we believe the prudent decision is to cancel our participation at Mobile World Congress.

‘We want to express our thanks to the GSMA, the governments of China and Spain as well as Catalonia’s Generalitat, and many others who have worked tirelessly to address the challenges resulting from the novel coronavirus, and they have our full support as they move forward.’

Nokia said it would instead hold a number of smaller events to make announcements it had planned for MWC.

In addition to Nokia’s telecoms business, HMD Global – the firm that makes its mobile handsets – has also confirmed it would not attend.

In its own statement, HMD Global said: ‘After much deliberation, and following recommendations from the relevant health authorities, we have decided to withdraw from exhibiting and participating at MWC Barcelona 2020. 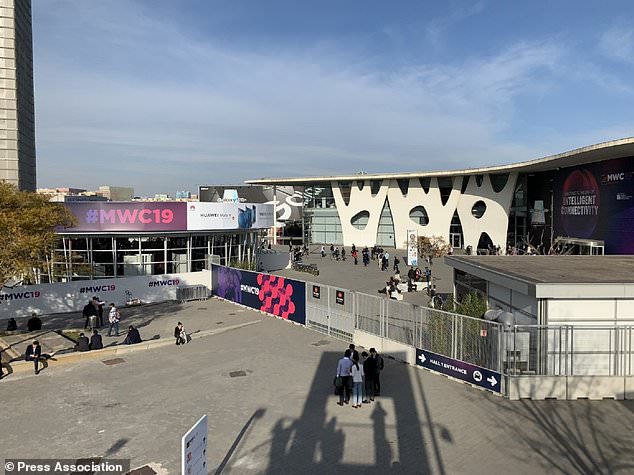 Pictured: The 2019 Mobile World Congress in Barcelona. This year it is due to be held between 24-27 February 2020 but the organisers are on the brink of calling the event off

‘MWC Barcelona has always been a key event in our annual calendar and we were very excited to showcase our new products to our partners, customers, media and fans.

GSMA is putting the following saefty measures in place at MWC:

* All travellers from the Hubei province will not be permitted access to the event.

*All travellers who have been in China will need to demonstrate proof they have been outside of China 14 days prior to the event (passport stamp, health certificate)

*Temperature screening will be implemented.

*Attendees will need to self-certify they have not been in contact with anyone infected.

*Medical support on-site will be doubled from last year.

*There will be increased presence of disinfectants and sanitisers across high-volume touchpoints such as WCs, entrances and exits and handrails.

‘However, the health and safety of our employees, customers and stakeholders is our highest priority.’

GSMA had said earlier this week the conference would go ahead as planned – but reports on Wednesday suggest otherwise.

GSMA was due to hold a ‘virtual’ meeting of its board, consisting of 25 industry bosses, at 13:00 GMT on Wednesday to discuss its options, according to three people with knowledge of the matter, Reuters reports.

‘They have to cancel,’ said a source with one exhibitor that has decided to pull out.

The organisers have not commented on the latest round of dropouts, but a source close to the organisation has said it is preparing a statement – which could be a complete cancellation.

MailOnline has contacted GSMA for more information regarding MWC 2020.

GSMA had introduced a number of new safety measures to prevent the spread of the strain of coronavirus, officially named Covid-19 by the World Health Organisation.

MWC banned attendees from the Chinese province of Hubei – where the strain Covid-19 is thought to have originated.

Anyone who has recently been to China will be asked to confirm that they have been outside the country for 14 days prior to the show – if it takes place.

Organisers have also confirmed that temperature screening will be in place and it is encouraging those attending to adopt a ‘no-handshake’ policy.

As of Wednesday morning, the total number of cases of Covid-19 was around 45,000 globally, with the number of deaths in mainland China reaching 1,113.

Over two dozen large trade fairs and industry conferences in China and overseas have been postponed or hit by travel curbs and concerns about the spread of a coronavirus, potentially disrupting billions of dollars worth of deals.

In order of scheduled or likely dates:

* Taipei International Book Exhibition, Feb. 4-9 – Billed as Taiwan’s largest annual literary event, the exhibition has been postponed to May 7-12.

* League of Legends Pro League, due to start Feb. 5: The e-sports league owned by gaming giant Tencent Holdings said it would postpone the start of its second week until further notice.

* Singapore Airshow, Feb. 11-16: The aviation leadership summit scheduled on the eve of the event was canceled. The show itself will go ahead as planned, but on a smaller scale with more than 70 exhibitors pulling out and the number of public tickets halved.

* National Association of Travel Agents Singapore (NATAS) travel fair 2020, Feb. 21-23: Moved to May because exhibitors were concerned about turnout at the fair.

* East China Import and Export Commodity Fair, March 1-4:Due to be held in Shanghai, the fair usually attracts traders of garments and household goods. It was postponed until further notice.

* Malaysia’s biggest palm oil conference, the Palm and Lauric Oils Price Outlook Conference and Exhibition, or POC2020, originally scheduled for March 2-4, will be rescheduled to June 22-24.

* Marine Money China, March 3-4: Originally slated to be held in Shanghai, organizers of the meeting for shipping financiers have said that it has been delayed, likely until November.

* Food & Hotel Asia in Singapore, March 3-6: Organisers of the biennial trade show have postponed its first leg to July. The event attracted more than 80,000 attendees when it was last held in 2018.

* 6th China LNG & Gas International Exhibition and Summit, Shanghai, March 4-6: Organizers said the event has been postponed until a later date this year. They are in the process of confirming the new date.

* Asian Ferroalloys, March 16-18: The conference by Fastmarkets, due to be held in Shanghai, has been postponed with no new date given.

* SEMICON/FPD China 2020, March 18-30: The annual trade conference for the global chip industry in China was postponed until further notice.

* China Development Forum, usually late March: Hosted by a foundation under the State Council, the conference was postponed until further notice.