Darrell ‘Bubba’ Wallace Jr. will make history as the first full-time black driver since 1971 in the predominantly white Daytona 500 race.

Wallace follows Wendell Scott from nearly 50 years ago – who was the first black driver to win a race in the Grand National Series since NASCAR was founded in 1948.

The 24-year-old will drive the No. 43 car for Richard Petty Motorsports on Sunday.

Wallace had driven the iconic No. 43 car to a third-place finish in a Daytona 500 qualifying race, setting off a celebration for Richard Petty Motorsports almost worthy of winning NASCAR’s marquee race itself.

The King strolled to the pits and hugged Wallace. The 80-year-old Petty wrapped his arm around Wallace , and they walked off smiling toward what each side hoped was the start of a fruitful alliance.

‘I just had a guard walk me from pit road to the media center. His name is Richard Petty. I’ve never seen him so excited in my life,’ Wallace said.

Darrell ‘Bubba’ Wallace Jr. is set to become the first full-time African-American driver to race in the NASCAR Cup Series since Wendell Scott in 1971 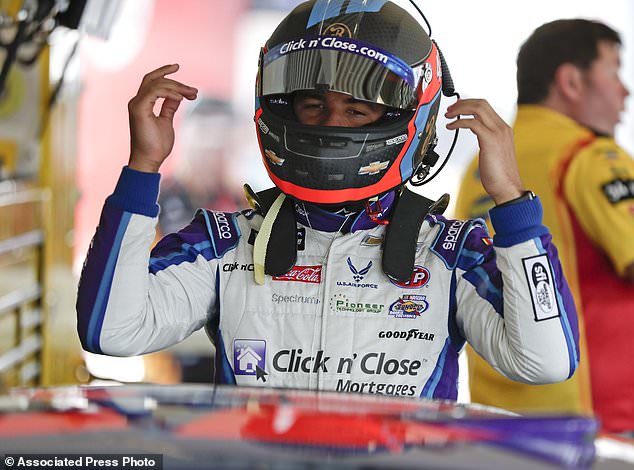 Wallace adjusts his helmet before a practice session for the NASCAR Daytona 500 auto race at Daytona International Speedway, Friday, Feb. 16, 2018, in Daytona Beach 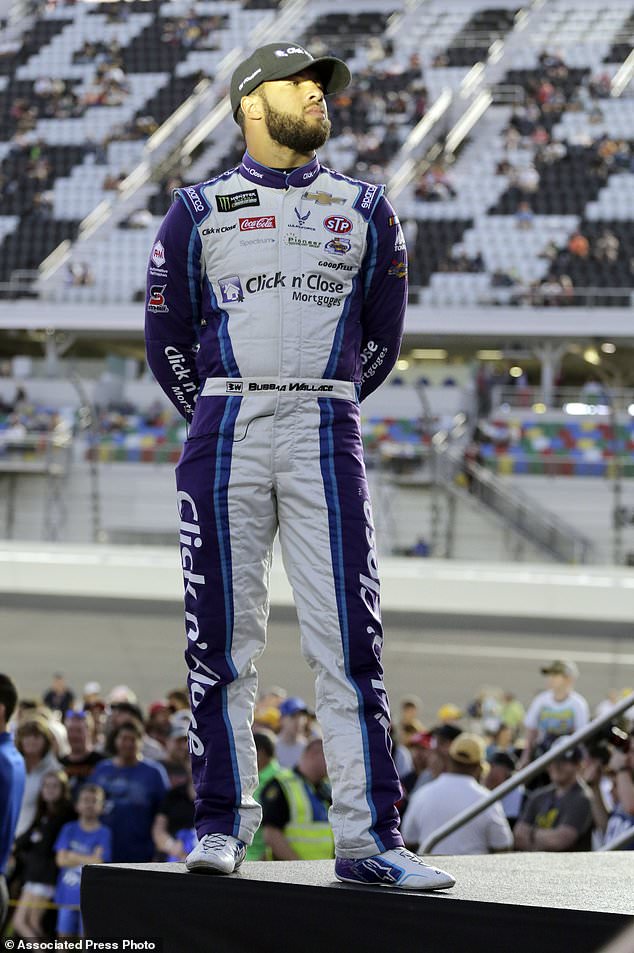 Wallace looks out from the stage during driver introductions before the first of two qualifying races for the NASCAR Daytona 500 auto race at Daytona International Speedway in Daytona Beach on Thursday, Feb. 15, 2018

That Wallace can energize Petty may symbolize as much a true passing of the torch as NASCAR could want: Petty and his deep kinship with old-school fans and Wallace, a video game playing, social media darling about to make history as the first black driver in decades.

Busting down racial barriers in a sport long reserved for whites is heavy stuff for Wallace, and he’s keenly aware all eyes are on him.

The rookie invites glare from his fans and haters, starring in his own eight-episode docu-series ‘Behind the Wall: Bubba Wallace ,’ on the Facebook Watch show page.

Wallace, the son of a white father and black mother, has openly talked of becoming the Tiger Woods of NASCAR – a black star who can transcend the sport and prove people of all colors can race and flourish in corporate America.

‘There’s a lot of stuff that’s riding on this weekend. I know it. I pay attention to it,’ Wallace said.

‘I follow a lot of people on social media, and it’s being put out there. But I’m doing my best at managing it, keeping it behind me, and that’s the best thing I can do.’ 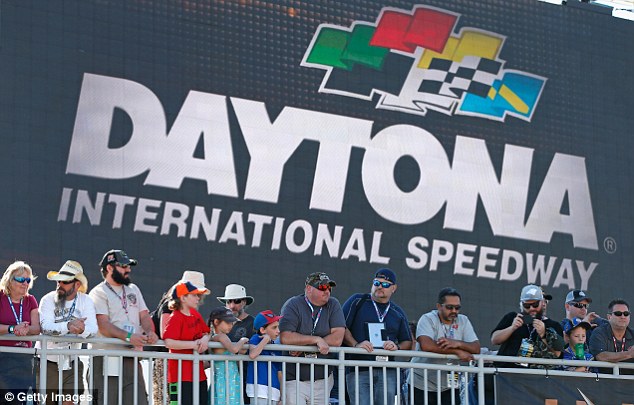 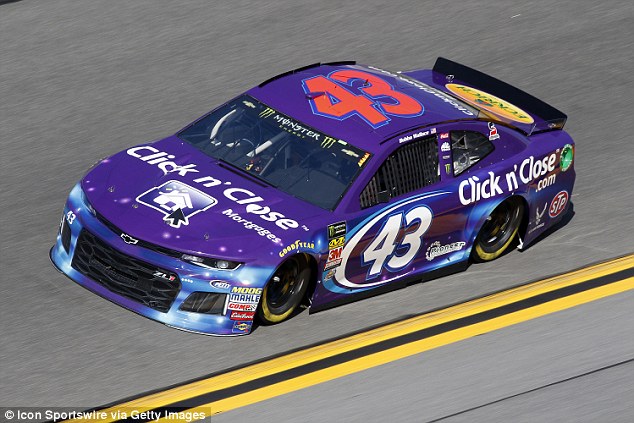 Aside from Scott’s 1963 Cup race win, the next win at a national event by a black driver came in 2013 when Wallace took the Truck Series checkered flag at Martinsville.

Wallace, raised in Concord, North Carolina, has the full support of the black drivers before him. Lester sent him encouraging tweets. Wallace met some of Scott’s children.

But none of the black drivers who raced before arrived with this kind of full-blown promotional push, acceptance in the garage and a solid ride that got him a seventh-place start in the Daytona 500.

Wallace went 196.954 mph on Saturday to top the speed chart in the final practice for the Daytona 500.

More commonly known by his childhood nickname ‘Bubba,’ the easygoing Wallace handled the spotlight with ease. 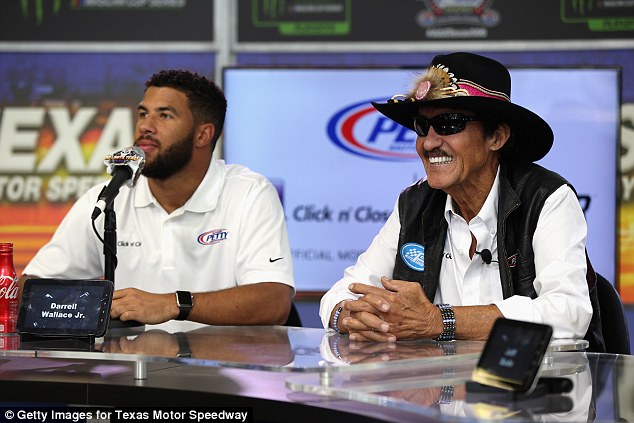 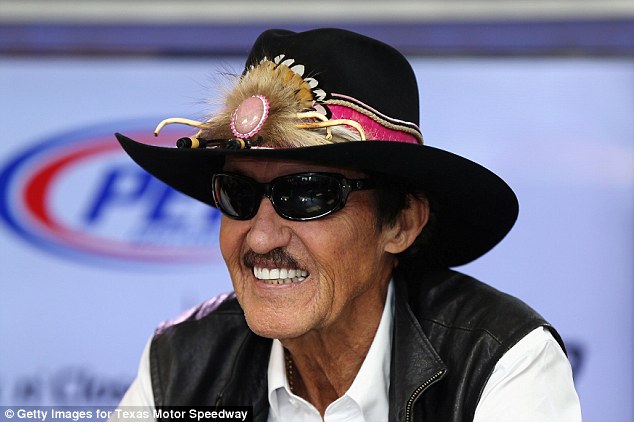 Wallace Jr. will drive the famed No. 43 car for Richard Petty Motorsports in 2018

Wallace wants to show ’em all – black, Hispanic, kids, any race fan – that he’s worthy of becoming a driver to root for and can live up to the lofty pressure heaped on him this season.

Though Confederate flags still dot the infield, Wallace said racism in all forms was nonexistent in NASCAR’s developmental series.

At the grassroots level, Wallace heard racial insults and ran into ignorant views.

The rise of social media has made it easier for hate to spread, and a high school football coach in Wisconsin resigned last year for a series or racist tweets aimed at Wallace.

Wallace previously tweeted in response : ‘There is only 1 driver from an African American background at the top level of our sport. I am the 1. You’re not gonna stop hearing about ‘the black driver’ for years. Embrace it, accept it and enjoy the journey.’

President Trump recognized Daytona 500 in a tweet on Sunday.

‘My great friends from NASCAR are having their big race today, The Daytona 500. Brian France and the France family are special people. Enjoy the race!,’ Trump wrote.

NASCAR’s three-year talent drain that saw bankable stars Jeff Gordon, Dale Earnhardt Jr., Danica Patrick, Tony Stewart and Matt Kenseth all leave the sport left a massive void that Wallace and a crop of 25-and-under talent must fill in more ways than behind the wheel.

‘I think with the amount of coverage that I’m getting right now and the entourage that I have following, a lot of people expect, ‘Oh, who’s this kid coming up through with this media? He should be winning,” Wallace said. 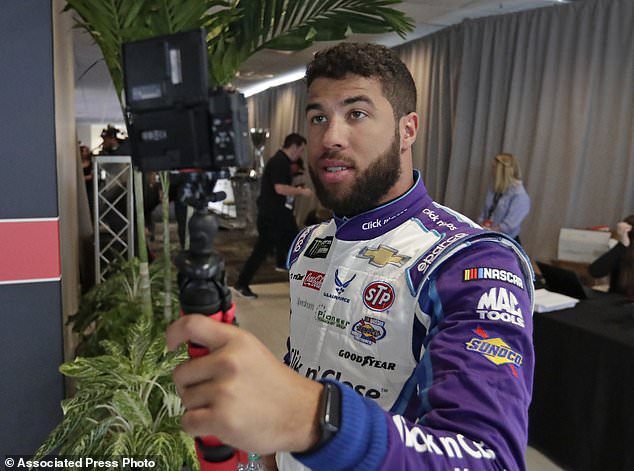 Wallace does a selfie video as he walks around during media day for the NASCAR Daytona 500 auto race at Daytona International Speedway, Wednesday, Feb. 14, 2018

He won six times in 45 starts in the Truck Series, went 0 for 85 in the second-level Xfinity Series and improved each race (26th-19th-15th-11th) in Cup when he raced for the injured Aric Almirola.

When Almirola left for Stewart-Haas Racing, Wallace got the call from The King to drive for RPM.

‘He didn’t say change this or do this,’ Petty said. ‘He let the crew figure out what to do with the car and he’d drive it.’

‘I started telling him the changes now because it’s my car this year and last year it wasn’t,’ Wallace said.

The King and Wallace bumped elbows and shared a laugh over who was really calling the shots on the No. 43 car.

Ryan Blaney, Wallace’s best buddy and frequent partner-in-party on social media, said Wallace will finally get to show off all his talent.

‘I know a lot of people have given him not a lot of credit in the offseason,’ Blaney said. ‘I think he proved himself (at Daytona) that he should be here and deserves to be here. I hope he can continue to do that.’

Wallace, Kyle Larson, and 2016 Xfinity champ Daniel Suarez have benefited from NASCAR’s efforts to diversify the field and perhaps give the sagging sport a boost while helping attract a new generation of fans.

NASCAR has widened its minority outreach efforts in a variety of ways: running diversity programs for drivers and pit crew development; outreach programs like NASCAR Hispanic Marketing and NASCAR Latino; and diversity awards held each year to honor inclusion throughout motorsports.

NASCAR research showed diversity among its fan base has grown from 20 to 24 percent over the last five years.

‘I think having a black driver in the race is going to have a potentially dramatically impact on the fan base which often looks to who is driving and if they can identify with somebody,’ said Richard Lapchick, founder of The Institute for Diversity and Ethics in Sports at the University of Central Florida.

‘This weekend, it’s more of a comfort feeling. It’s more of a, ‘Hey there’s somebody who looks like me in this race.’ It’s, ‘Maybe NASCAR is more open than I thought it was’ for those who aren’t fans now.’

Like Wallace wrote on Twitter, NASCAR hopes millennials on up will embrace him, accept him and enjoy the journey.