Six months ago, Bud Light made a bet on the Super Bowl, promising free beer for everyone in Philadelphia if the Eagles won it all.

Now parent company Anheuser-Busch InBev may actually have to pay up when the Eagles face the New England Patriots in Super Bowl LII on Sunday in Minneapolis.

‘I have a lot to prove to this city,’ Johnson said after an open practice in August.

‘I think if we have a few big years and make the playoffs, if we win a Super Bowl, I’m giving out beer to everybody.’

Bud Light chimed in, tweeting a link to the remarks and adding: ‘Let’s make a bet. Win it all and the party is on us. Deal?’

At the time, the odds of the Eagles winning the Super Bowl were pegged at 50-1.

Bud Light tweeted this promise in August, when the Eagles were 50-1 to win the Super Bowl 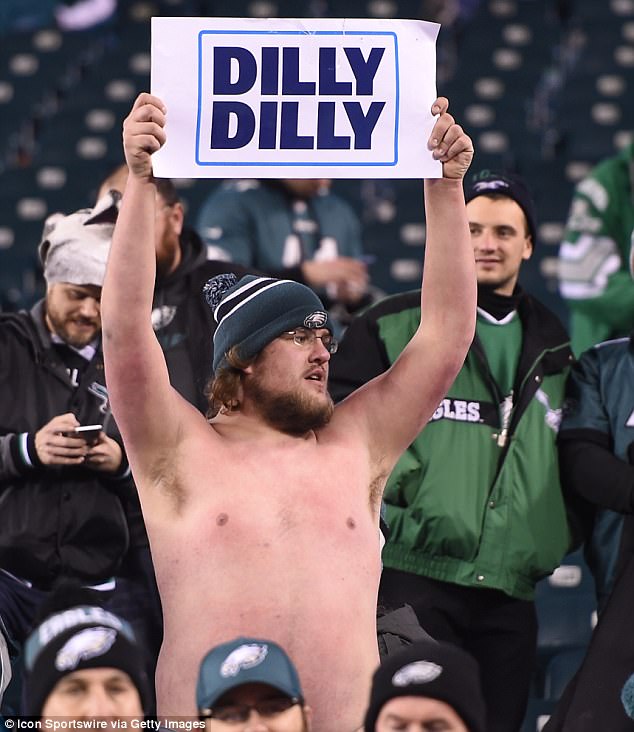 A Philadelphia Eagles fan holds a Dilly Dilly sign during the NFC Championship game on January 21. Fans are hoping Bud Light follows through on a bet to buy beer for the city 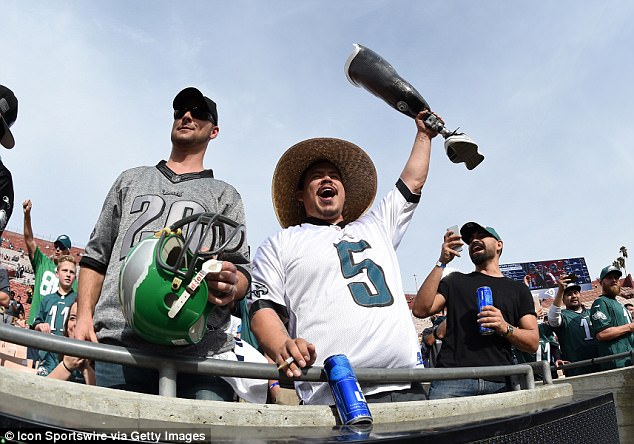 Eagles fan Carlos Garcia holds up his prosthetic leg during a game last month. The city’s fans will be let down if Bud Light does not follow through on a pre-season bet 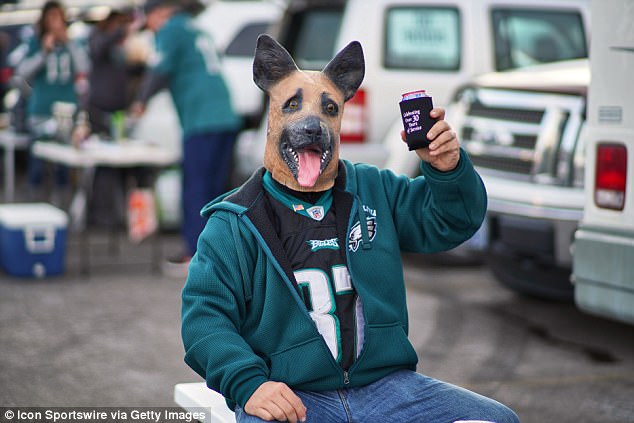 Bud Light has been tight lipped on its plans for a Philly win. Pictured: An Eagles fan wearing a dog mask partakes in the tailgate events prior to the start of the NFC Championship Game

In late November, when the Eagles were sitting pretty with a stellar 12 wins and one loss for the season and 4-1 odds of winning the Super Bowl, Bud Light doubled down.

Now the Eagles are just one win away from the Lombardi Trophy, with the latest odds favoring the Patriots by a point spread of just 4.

Yet Bud Light remains mum on its plans for a Philadelphia win, saying it doesn’t want to jinx the team.

The company offered a vague statement to Fox News last week, writing: ‘Congrats to the Eagles on earning a trip to Super Bowl LII.’

‘We are still planning an epic celebration, but true friends of the crown never assume victory, so in the interest of not jinxing the team, we will keep our plans under wraps until the outcome of the Super Bowl is determined,’ the statement continued.

Bud Light doubled down on the promise in November, when the Eagles odds were at 4-1 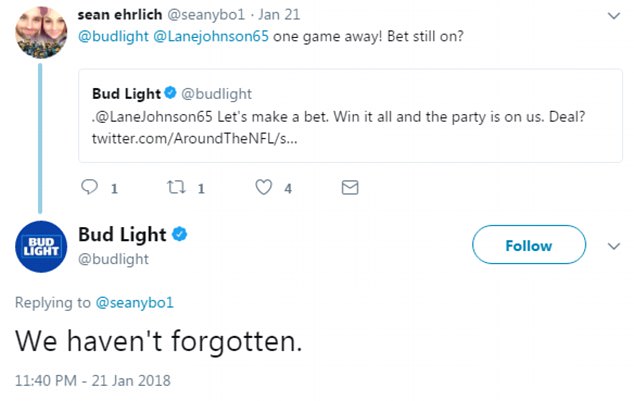 After the NFC Championship, the company again responded ‘We haven’t forgotten’ 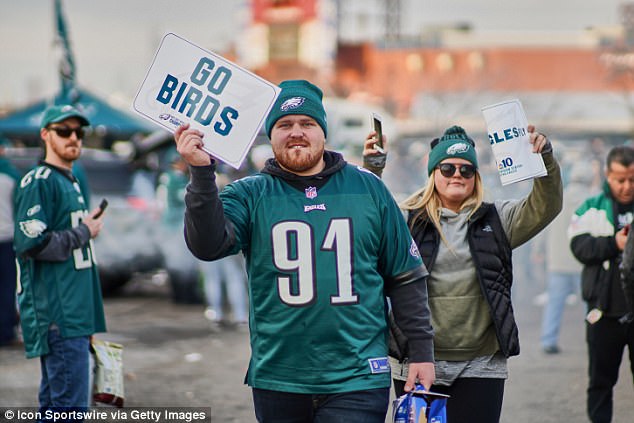 A Philadelphia Eagles fan partakes in the tailgate events prior to the start of the NFC Championship Game. The team’s fans are notoriously rabid 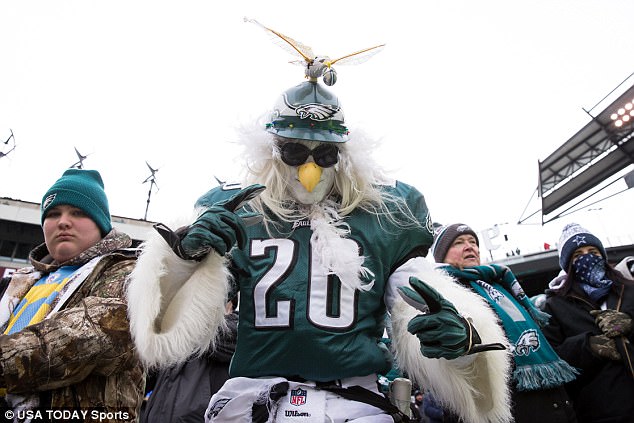 Philadelphia has a legal drinking-age population of 1,059,790, according to Census data. Pictured: an Eagles fan cheers before the start of a game last month

‘We look forward to delivering on our promise and sharing a few beers with our friends in Philly should the Eagles bring home the Lombardi Trophy. Fly Eagles Fly and just this once – Philly Philly,’ the company said.

Philadelphia has a legal drinking-age population of about 1,060,00, according to Census data.

The city’s sports fans are notoriously passionate in their celebrations.

Following the NFC Championship, police in the Philadelphia greased the light poles in Crisco to prevent rabid fans from climbing on them.

A representative for AB InBev did not immediately respond to an inquiry from DailyMail.com about the company’s plans if the Eagles win.

The company is running a ‘trilogy’ of ads on the whimsical medieval theme.

Watch the first two below.