Western Bulldogs rising star Sam Darcy is going to be a tall order for his opponents to face in the AFL – and he is still growing.

The 19-year-old, who was the number two pick in the 2021 national draft, has grown an astonishing 5.5cm since arriving at Whitten Oval last November.

It elevates the talented youngster to an imposing 209.5cm, with Richmond project player Mate Colina (213cm) and Collingwood ruckman Mason Cox (211cm) the only two players in senior AFL footy taller than Darcy.

He is also blessed with enviable genes – his father Luke was a Bulldogs legend, as was his late grandfather David.

While yet to make his senior debut, good judges are adamant the teenager has what it takes to excel with a Sherrin. 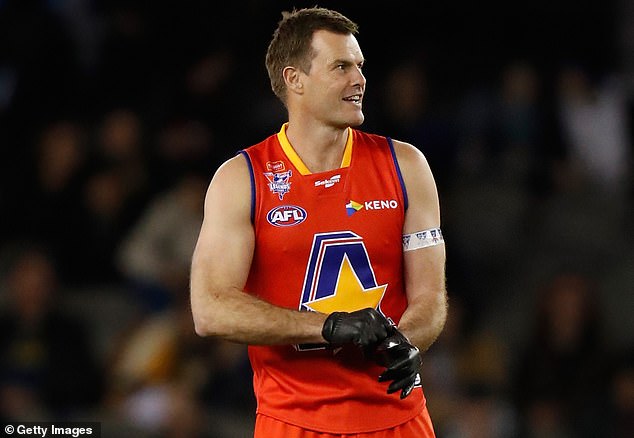 The youngster is also blessed with enviable genes – his father Luke (pictured) was a Bulldogs legend, as was his late grandfather David

Darcy has been patient, with a foot injury keeping him sidelined for the majority of 2022.

He returned to the field with Footscray in round eight of the VFL, and has been a standout.

Be it in the ruck, at centre half-back, as a key defender, centre half-forward, and even deep forward, his versatility has some footy fans calling for Luke Beveridge to blood him on the AFL stage.

His father Luke told The Age a measured approach is key.

‘It’s great to see him fit and healthy, out there doing what he loves,’ he said.

‘When you’re playing week in, week out, you start to build some confidence. He plays in a great environment, and seems to be loving every moment. It’s a privilege to play sport for a living, and he loves it.’

Speaking on AFL Nation earlier this year, Bulldogs CEO Ameet Bains also felt the youngster has what it takes to become a senior player.

After losing the AFL grand final last season, many footy fans felt the Bulldogs would be a premiership force in 2022.

It hasn’t been the case, with the Bulldogs sitting in tenth spot with finals looming.

The premiership-winning coach accused Morris of ‘gutter journalism’ in one of the all-time rants after he correctly tweeted Lachie Hunter would be omitted from the Bulldogs’ team for the grand final replay.

Beveridge later apologised for his outburst, but it set the tone for the Bulldogs, who have struggled for consistency ever since.

This Saturday they host Fremantle at Marvel Stadium in round 21 action.