Record tax receipts helped public finances to their largest January surplus in eight years, it was revealed today – but this might still not be enough to achieve the deficit reduction target promised by Chancellor George Osborne.

In the last set of figures on public finances before the Budget on 16 March, the Treasury surplus surged by £1billion on last year to £11.2billion – the largest for any January since 2008.

However, January is always good month for tax revenues because of the boost from self-assessment payments and some  estimates had pencilled in an even bigger surplus.

Explanations: Chancellor George Osborne will miss his deficit reduction target of £37.5billion as public sector borrowing is set to overshoot the OBR’s forecast

Tax receipts increased by £200million to a record £12.4billion, although self-assessment receipts were up just 1.6 per cent on a year ago and corporation tax receipts actually fell nearly 8 per cent.

Public sector net borrowing also decreased by £10.6billion to £66.5billion in the current financial year to date, according to the Office for National Statistics.

But analysts have highlighted that the pace of deficit reduction is falling somewhat short of the Chancellor’s target of £73.5billion for this year.

With another two months to go before the end of this financial year, it means borrowing would need to come in at £7billion or less in both February and March in order for the deficit reduction target to be met.

But this seems highly unlikely, given that the final two months of 2014-15 saw the government borrow double that amount – almost £15billion. This means that Osborne could decide to cut spending further or raise taxes in a bid to balance the books.

Investec analyst Chris Hare said: ‘If borrowing maintains its current trajectory over the final two months of this fiscal year, the 2015/16 deficit is set to overshoot the OBR’s £73.5billion forecast by over £5.5billion.’

Osborne will then also need to explain how he intends to achieve a surplus in 2019/20 and in all subsequent years of ‘normal’ economic growth as previously promised. 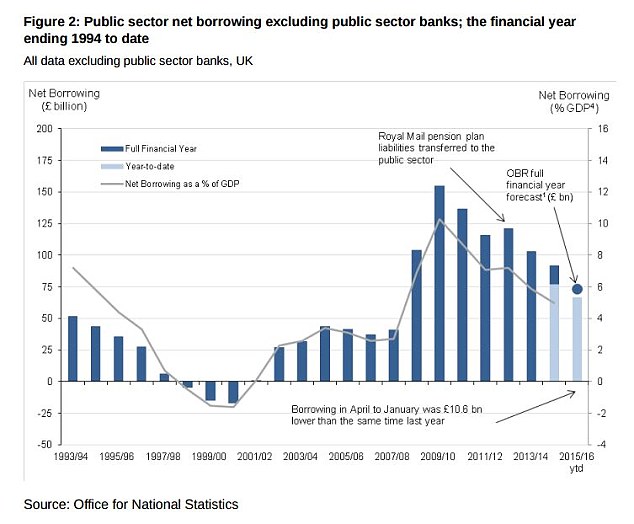 Martin Beck, senior economic advisor to the EY ITEM Club, said: ‘With this being the final public finances release before the Budget, it seems certain that the OBR will have to revise up its forecast for this year. The important questions then are by how much and what will the implications be for future years.’

He added: ‘Whether or not the OBR judge this to be permanent will be crucial given that this overshoot represents around half of the Chancellor’s margin for error against his fiscal rules.

‘The OBR’s call will depend on the degree to which they judge the recent weakness in tax receipts, which is a result of weaker than expected nominal GDP growth, to be a cyclical or structural phenomenon.’

Since last November’s Autumn Statement, wages growth in the UK has slowed down, which means lower tax receipts, and global economic conditions have worsened. Concerns over China and global growth have lead to tumbling stock markets and the governments’ postponement of the sale of Lloyds Banking Group.

Maike Currie, investment director for Personal Investing at Fidelity International, said that between the November 2015 Autumn Statement and the end of January, equity prices fell by 7.5 per cent.

She said that, according to the Institute for Fiscal Studies, if they were to remain 7.5 per cent below the OBR’s latest forecast, this could reduce capital tax receipts in 2020–21 by around £2billion.

‘As the IFS has pointed out, budget surpluses are rare events. Ignoring the immediate post-war period, when large surpluses were run, since 1952 there have only been eight out of 63 years in which the UK government has spent less than it has received in revenues, and it has never done so for more than three consecutive years.

‘The Chancellor may have painted himself into a dangerous corner with his deficit elimination promise, after all total debt matters far less than debt affordability and currently record low interest rates means that we have never seen Britain’s debt as cheap,’ Currie added. 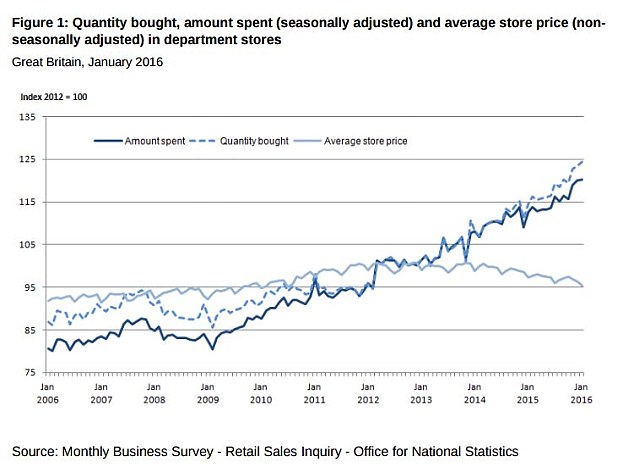 Up: Retail sales figures for January came in well stronger than expected, probably thanks to January sales

Meanwhile, retail sales shot up 2.3 per cent in January compared with December, when they fell 1.4 per cent, leaving them 5.2 per cent up on the year, according to the ONS.

The figures were well stronger than expected, probably thanks to January sales, as shoppers splashed out £26.6 billion.

The ONS suggested that the outlook for department stores specifically was bright and that some of the growth in January could be down to the rollover from Christmas.

‘Looking at the longer-term picture, department stores saw the 34th month of consecutive year-on-year growth which is the longest sustained period of growth within this store type since the economic downturn in 2008,’ the ONS said.

The appetite for online shopping continued, with such sales increasing by 10.4 per cent in January 2016 compared to a year earlier. Average store prices, including petrol, fell by 2.6 per cent, the 19th consecutive month of year-on-year price falls.

‘However, it will be tempered by concern that the UK economy remains unbalanced and too dependent on consumer spending and the services sector,’ he added.

Despite the set of upbeat economic figures, the pound did not move higher as markets continued to focus on the Britain’s negotiations with the European Union.

Andy Scott, economist at HiFX, said: ‘Sterling failed to strengthen on the back of much stronger than expected retail sales figures for January, along with the largest budget surplus since 2008, as markets continued to focus on Britain’s renegotiated deal with the EU.

Sterling actually fell against the dollar and euro by about 0.3 per cent, with the pound currently buying $1.4282 and €1.2868 on currency markets.

‘With talks between Cameron and his EU counterparts due to resume this morning, the market is clearly unsure that a deal can be reached this time around, leading to further uncertainty which is weighing on Sterling. If they do manage to strike a deal, we would expect some sort of relief rally in Sterling against the Dollar towards 1.45, and to 1.30 against the Euro,’ Scott added.