Budget hotels with billion-dollar views, from Cairo to the Niagra Falls

Get the hotel view right and everything else is… well, just window-dressing.

For more than a decade, Ravesis on Bondi Beach has been one of my favourite hotels. In a room that looks out on to the sand, I’ve seen swimmers arrive at dawn and film buffs congregate at dusk for Bondi’s open-air cinema.

But you don’t have to be a billionaire to bag a room with a billion-dollar view. Here are the top places that don’t cost the earth.

There are plenty of expensive places to stay but none has a better view than the aptly named Pyramids View Inn, above

In the 1920s, a trip to see the pyramids at Giza was an expedition only for hardy, affluent travellers. These days, Egypt is far more reachable. There are plenty of expensive places to stay but none has a better view than the aptly named Pyramids View Inn.

The rooms are comfortable and air-conditioned and there’s a great roof terrace with a view of the pyramids and sphinx that have been in place for more than 4,000 years.

Settle in for the evening and you’ll be able to experience the nightly son-et-lumiere for free.

Room-only doubles from £48 a night (pyramidsviewinn.com). 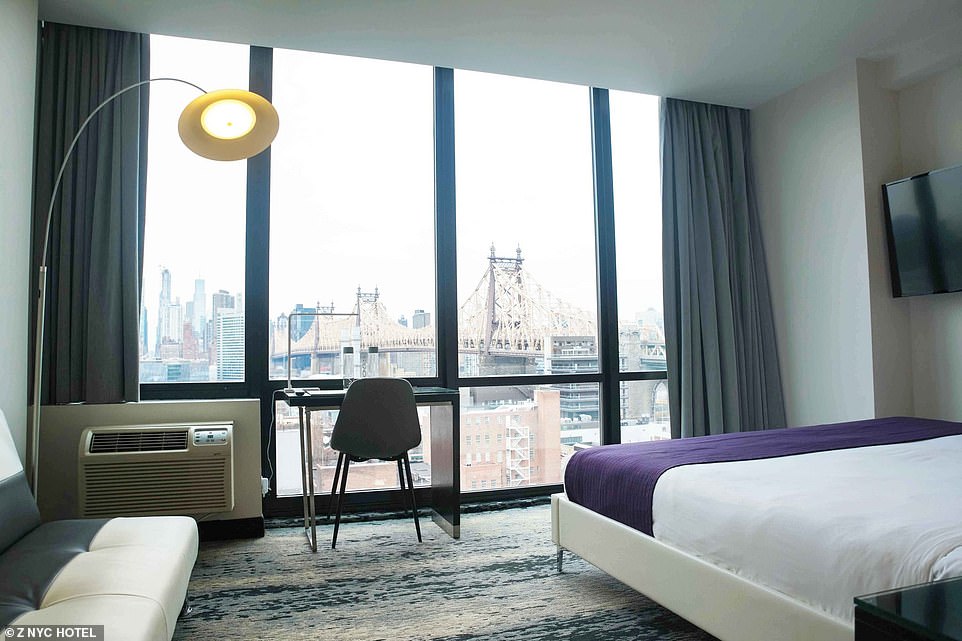 Pictured is one of the rooms at Z NYC Hotel, which offers great views of the city with its floor-to-ceiling windows

For the best view of the extraordinary Manhattan skyline, you don’t want to actually stay there.

Put a stretch of water between you and the skyscrapers and New York’s magic is magnified – and the price of a room drops like a stone.

The Z NYC Hotel is in Queens but only two subway stops from Central Park.

Even if you book one of the more expensive rooms, with floor-to- ceiling windows looking out on to the Chrysler Building and the rest of Midtown, you’ll still get change from £200 a night.

Doubles from £153 a night, including continental breakfast (zhotelny.com).

These four rooms are a lion’s roar from Rome’s most famous landmark. There isn’t a reception area – instead, you text the owners just before you arrive and they’ll provide you with keys.

There aren’t many frills either – you’ll have breakfast in the cafe beneath the rooms – but everything is clean and you are in the very heart of the oldest part of Rome.

Open the window and you’ll look out on to the stunning 2,000-year-old amphitheatre.

Doubles from £85 a night (colosseopanoramic.it).

This 12-room hotel looks out on to one of Sydney’s most famous sights – the white sand and rolling surf of Bondi Beach, with the Icebergs swimming pool to your right and the Surf Bathers Life Saving Club to the left. Ravesis is in the middle of Campbell Parade, with better views of the beach than a posher hotel 200 yards away. There’s also a busy bar on the first floor.

Room-only doubles from £150 a night (hotelravesis.com).

The luminous blue waters of Lake Tekapo, framed by New Zealand’s Southern Alps, is one of the most beautiful sights in a country stuffed full of landscape sensations.

Lake Tekapo is three hours from Christchurch and there are any number of smart inns around here, but none has the views you’ll get from the YHA. Don’t let the fact that it’s a hostel put you off.

In addition to shared rooms, there are double rooms with ensuites and flatscreen TVs.

However, it’s the view outside you’ll be raving about thanks to the design, including large windows that make the most of the glorious setting.

Archibald at the Charles Bridge, Prague

On beautiful, historic Kampa Island, this pretty, mustard-coloured, three-star hotel has exactly the position you want.

On a cobbled street, this 16th Century building is just a few steps from the banks of the Vltava.

Not all the rooms have views of the 14th Century Charles Bridge, but if you head to the higher floors, the reward is there – one of Europe’s most romantic sights.

Doubles from £97 a night, including breakfast (archibaldatthecharlesbridge.cz). 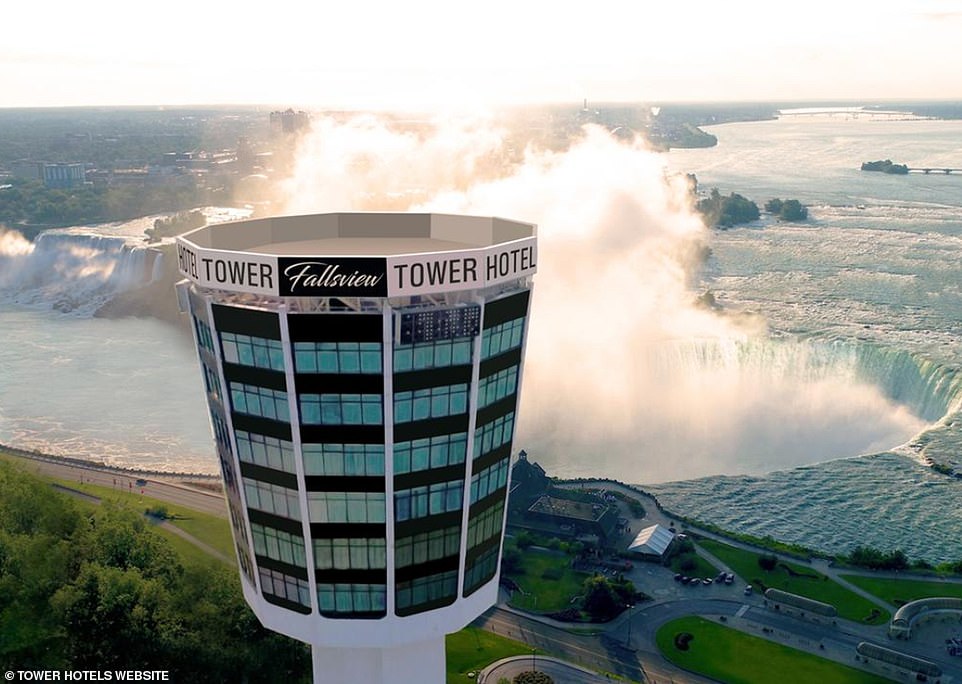 Making a splash: Niagara’s Tower Hotel is not the most pleasing hotel to look at – it’s a bit of 1960s Brutalism – but it’s the one closest to the water and it is refreshingly budget-minded

Heading to the Canadian side of Niagara Falls will benefit your wallet and give you the best views.

This is not the most pleasing hotel to look at – it’s a bit of 1960s Brutalism – but it’s the one closest to the water and it is refreshingly budget-minded.

Not only are the rooms some of the area’s best-value billets, but the 27th floor restaurant is the cult International House of Pancakes, where you can fill up while watching six million cubic feet of water fall every minute.

Doubles with a view from £105 a night, including a £12 breakfast voucher (niagaratower.com). 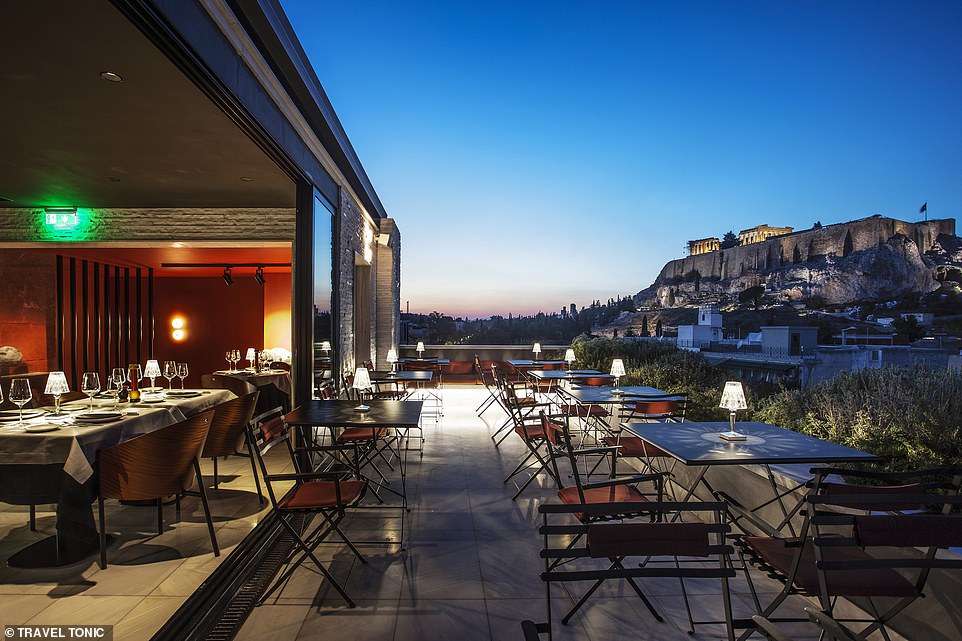 Modern meets ancient: The terrace of the AthensWas hotel, with the 2,500-year-old Acropolis on a hilltop in the distance

With modern interiors and ancient views, AthensWas isn’t in thrall to the past.

Its rooms are full of cool modern furniture and sleek bathrooms. Incredibly, every room has a balcony and most of them look out on to the 2,500-year-old Acropolis. Can’t get enough of the view? There’s also a rooftop restaurant with a terrace, so even if you don’t bag a room with a view, it’s worth staying here.

Doubles from £138 a night, including breakfast (i-escape.com).

Who knew that the desert around Dubai could be so hip?

This hotel in Hatta, a 90-minute drive from the city, may have been created from shipping containers but the result is striking – a series of individual lodges with bathrooms, cool furniture, balconies and barbecues.

There’s no restaurant here but there are food trucks and the hotel can arrange delivery from restaurants in nearby villages.

But you do get nature – and plenty of it – with a staggeringly beautiful natural amphitheatre of mountains to greet you.

Room-only doubles from £112 a night (visithatta.com/en/damani-lodges).

La dolce vita: The stunning vista of Venice’s Grand Canal from the Hotel Galleria, which is a little one-star gem

Most Grand Canal hotels charge a fortune for the view, but not this little one-star gem.

With just nine rooms – all decorated in the traditional Venetian style with damask wallpaper and panache – this hotel was where poet Robert Browning once stayed.

It’s still family-run and just by the Accademia Bridge, at the point that the Grand Canal expands into St Mark’s.

Rooms 5 and 8 are considered to have the best views but all of them allow you to see gondolas, vaporettos and water taxis passing by your windows.

Room-only doubles from £89 a night (hotelgalleria.it).