The Chancellor has delivered a stamp duty giveaway that could save first-time buyers £5,000, but ultimately this will drive up house prices, the Budget watchdog has warned.

Philip Hammond slashed tax bills for first-time buyers today as he removed stamp duty up to £300,000 for all those buying their first home.

But the Office of Budget Responsibility said this would feed through into higher house prices, meaning first-time buyers pay more. Its review said: ‘Thus the main gainers from the policy are people who already own property, not the first-time buyers themselves.’

So will the stamp duty holiday help or hinder first-time buyers? We take a look.

What did first-time buyers get in the Budget?

First-time buyers are in line to save up to £5,000 each after the government permanently scrapped stamp duty up to £300,000 for them.

Buyers purchasing first homes that cost up to £300,000 will pay nothing in stamp duty. The tax will also be slashed for first-time buyers spending up to £500,000, though only the first £300,000 will be stamp duty free.

The dramatic move will mean a first-time buyer who bought on Monday this week and paid £300,000 for their home would have saved themselves a whopping £5,000 if they’d completed the sale tomorrow instead.

Government figures suggest the move will mean 95 per cent of all first-time buyers who pay stamp duty will save money while 80 per cent will pay no stamp duty at all.

Announcing the bold move Chancellor Philip Hammond told a packed House of Commons: ‘I want to take action today to help young people who are saving to own a home.

‘One of the biggest challenges facing young first-time buyers is the cash required up front. With effect from today, for all first-time buyer purchases up to £300,000, I am abolishing stamp duty altogether.

‘To ensure that this relief also helps first-time buyers in very high price areas like London, it will also be available on the first £300,000 of the purchase price of properties up to £500,000. Meaning an effective reduction of £5,000.’

A review of stamp duty had been widely trailed in the weeks leading up to today’s Autumn Budget, though most commentators were expecting a temporary stamp duty holiday for first-time buyers or a small rise of the initial threshold.

But Hammond said: ‘That would only help those ready to purchase now. And would offer nothing for the many who will need to save for years.’

How does the stamp duty cut work?

The government has said that from today it will introduce a new permanent relief for certain first-time buyers that will cut stamp duty land tax to zero on properties up to £300,000.

First-time buyers who buy a property for £500,001 or more will not benefit from the relief at all.

What will you save?

Research firm Jeffries estimates that the average first-time buyer spends around £165,000 on their first home.  The stamp duty cut will save them £800.

Jeffries analyst Anthony Codling said: ‘Stamp duty is not, in our view, the barrier to home ownership; deposits are.

‘The most attractive mortgage rates are for those with more than a 25 per cent deposit – or £41,250 in our example – more than 50 times  the stamp duty saved.

‘If the goal of the Budget was to help increase homeownership, the wrong lever has been pulled.’

Because stamp duty is paid by buyers, it makes the upfront cost of buying a property higher than it would be without the tax.

But as prices step up so do bills, substantially.

In London and the South East house price inflation has been rampant over the past 20 years or so, with the average property value in the capital now at £484,000.

To buy this property, a 10 per cent deposit would run to a cool £48,400 in cash – and a buyer needs to find another £14,200 to pay the stamp duty, not to mention the legal, mortgage and valuation fees and moving costs.

One of the biggest barriers to getting on the housing ladder in the first place is the length of time it takes would-be homeowners to save such large sums.

In areas of the country where house prices are high, rents are also usually high, which puts additional pressure on their finances and reduces their ability to save.

Will the stamp duty cut drive up house prices?

The stamp duty exemption should save first-time buyers some money and mean they can afford to buy sooner as they’ll have less to save to pay their deposit, tax, fees and moving costs.

However the OBR claims it’s also likely to push house prices up – by around 0.3 per cent according to its analysis based on an HMRC evaluation of the stamp duty holiday after the financial crisis.

The OBR said: ‘The effect of this reduction in future stamp duty costs would be expected to feed through into house prices – to be ‘capitalised’ – relatively quickly. Since the relief frees up first-time buyers’ savings to put towards higher deposits, these higher prices can be paid.

‘We assume that a temporary relief would feed one-for-one into house prices, but a permanent one will have twice that effect. On this basis, post-stamp duty prices paid by first-time buyers would actually be higher with the relief than without it.’

So, according to the OBR, first-time buyers who should save money on stamp duty may actually find they end up paying more for the property, and therefore don’t save anything.

First-time buyers who should save money on stamp duty may actually find they end up paying more for the property.

At the same time, the OBR suggested that homeowners should be happy first-timers are being allowed to skip out on stamp duty while they’ve been given no such help to move up the ladder.

The OBR statement claimed: ‘The main gainers from the policy are people who already own property, not the first-time buyers themselves.’

Whether or not you think this is true is down to your perspective.

Those selling properties to first-time buyers who qualify for the relief are still going to have to pay stamp duty on their next home.

The benefit of being able to charge 0.3 per cent more for their home may not feel like much solace if they’re faced with their own stamp duty bill on what is likely to be a bigger and more expensive home. 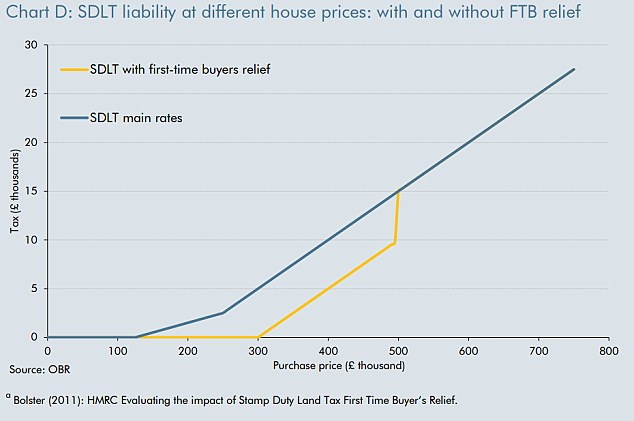 The OBR claims it’s likely to push house prices up by around 0.3 per cent

The Budget watchdog also warned that the new stamp duty relief will ‘distort the housing market at prices around £500,000’.

Chart D (above) shows the jump in the effective tax rate at that price, which the OBR warned will reduce tax receipts as first-time buyer transactions bunch below the threshold.

The OBR also said it’s likely that some first-time purchases will displace second-time buyers who would have paid more stamp duty on the equivalent purchase.

Who will the stamp duty cut help?

The key thing to watch out for is whether or not you actually qualify as a first-time buyer.

There are strict rules around this – if you’ve owned a property previously but have sold and don’t currently own, you’re not going to benefit from this tax relief.

You also don’t count as a first-time buyer if you’ve owned a major share of a property in the past.

If you’ve owned any property anywhere in the world, you won’t qualify for the tax relief either.

However, you will qualify for the relief if you’ve only ever owned commercial property such as a shop, office or other commercial building.

If you’re buying together with a partner, family member or friend, you’ll both have to meet these criteria otherwise stamp duty will be payable at normal rates.

Property firm HouseSimple looked at 80 major UK towns and cities and found that 49.6 per cent of properties currently for sale will now be stamp duty exempt for first-time buyers.

Those living in the South East and London have far less choice.

Will the stamp duty cut fix the housing market?

This was bolder than a temporary stamp duty holiday but it fell far short of what many housing experts, economists and academics warned was needed.

Simon Gerrard, a past president of the National Association of Estate Agents, called Hammond’s collection of housing policies ‘patchy’ and warned they would ‘ultimately fail to address many of the underlying problems facing our housing market’.

‘He has done nothing to help improve transactional volumes and, while obviously intended as a final flourish, his announcement on a stamp duty exemption for first-time buyers still does nothing to boost the rest of the property chain,’ he said.

While on the surface stamp duty exemption for some may seem like a gift, it fails to consider the fact that second steppers, who will be moving out of the homes first time buyers wish to live in, are in exactly the same situation. They can’t afford the stamp duty either.

If they aren’t moving out and up the chain then what are these first-time buyers going to purchase?

Downsizers were also ignored and many are reluctant to pay large stamp duty bills and therefore don’t move, thereby freeing up homes for sale either.

Mortgage expert Ray Boulger, of broker John Charcol, said: ‘The Chancellor has also recreated a problem that his predecessor changed when he belatedly removed the cliff edge problem by abolishing the slab tax model.