Builder, 51, is named as the winner of a £76 million EuroMillions jackpot

Andrew Clark, 51, from Boston in Lincolnshire has been named as the winner of the £76 million EuroMillions jackpot

A self-employed builder drove around for six weeks with a £76 million EuroMillions ticket tucked in the visor of his van without realising.

Andrew Clark, from Boston in Lincolnshire, worked through weeks of bitterly cold weather with the winning ticket sitting inside his Peugeot Expert.

The grandfather-of-three scooped the 12th biggest win ever in the UK after buying the ticket in his local Post Office.

Christmas has come early for the 51-year-old, who announced he will now be taking early retirement.

Referring to himself as ‘the man who nearly lost £76 million’, Mr Clark revealed he stockpiled lottery tickets in the visor of his van and only checked after his girlfriend Trisha Fairhurst, 51, nagged him to.

Mr Clark has bought a four-bed house, an £80,000 Mercedes-Benz AMG C 63 and a Nissan Qashqai since he found out he was the winner last week.

He said he and his family will stay in the UK over the festive period and enjoy dinner in a restaurant in Skegness on New Year’s Eve.

Mr Clark also revealed that he will be sharing his millions with more than 20 people in his family, including Trisha’s 14-year-old daughter, who has special needs.

He said: ‘She will be set up for life. Any care she needs she will have.’ 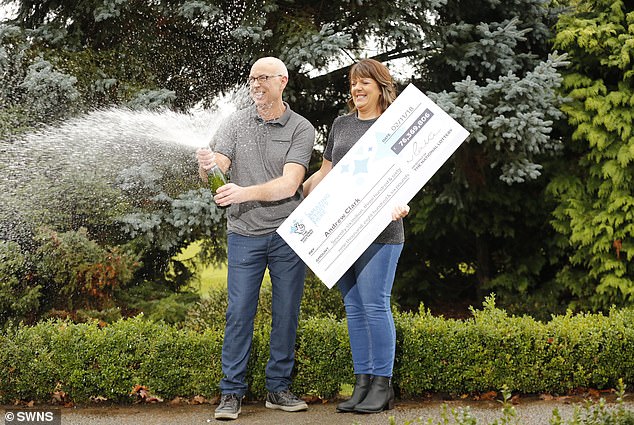 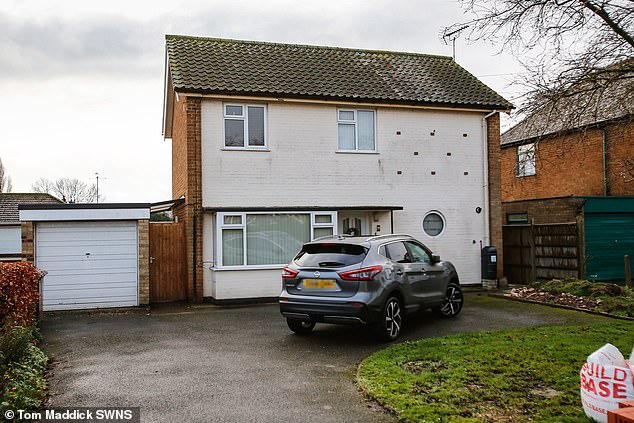 Mr Clark has bought a house, a Mercedes-Benz AMG C 63 and a Nissan Qashqai (pictured outside the couple’s current home) since he found out he was the winner last week 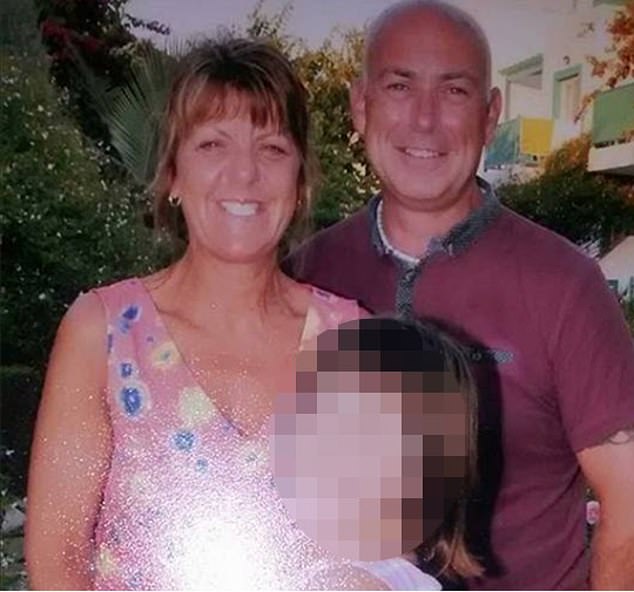 Mr Clark said he only checked through his tickets after his partner Trisha, left, told him to. He also revealed that he will be sharing his millions with more than 20 people in his family, including Trisha’s 14-year-old daughter, who has special needs 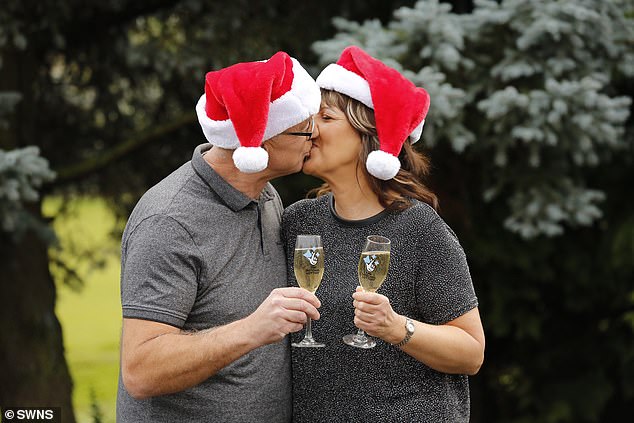 Self-employed Mr Clark revealed himself as the winner at a press conference in Grantham this morning.

Mr Clark has two sons from a previous relationship and three granddaughters aged nine, six, and two. He has put £200 each in his grandchildren’s Christmas cards, adding they would all be ‘well looked after.’ 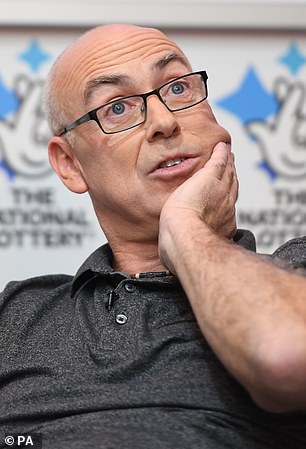 He said: ‘They’ll not want for anything.’

Asked if he and Trisha, who met on an online dating site, would be set to get married, he replied: ‘There are no plans for a wedding at the moment.’

He said he realised he was the winner after he ‘finally gave in’ and began working his way through his stash of tickets one evening.

He said: ‘Trisha kept telling me to check the tickets, and her niece Louise, who I was building an extension for, was also in on it once she’d heard about the unclaimed prize in the news.

‘It was something of a standing joke that I had all these tickets while there was a local prize outstanding, so for weeks they were on at me to check.’

‘I finally gave in, got the bundle out of the van and started to work my way through them, methodically from the oldest to the most recent, starting with Lotto, before moving into my EuroMillions tickets.

‘I said I will leave the Euro one for tomorrow but Louise said “no check it now.” 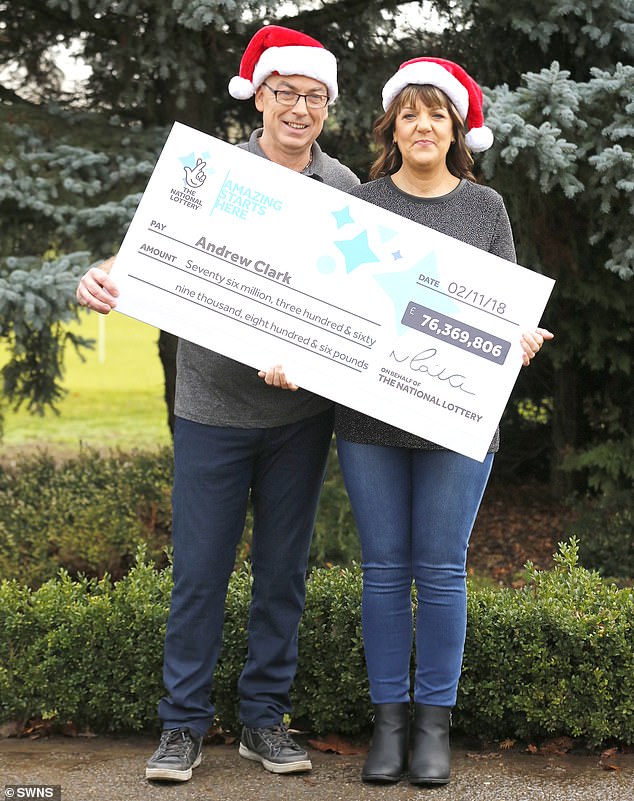 Referring to himself as ‘the man who nearly lost £76 million’, he said he realised he was the mystery winner after he ‘finally gave in’ and began working his way through his stash of tickets one evening 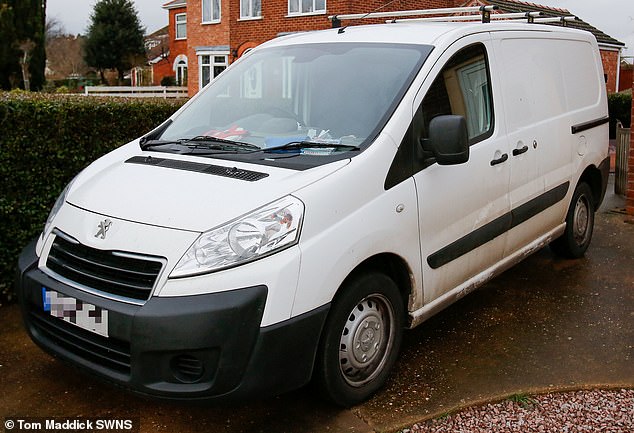 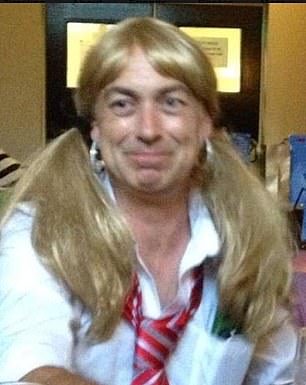 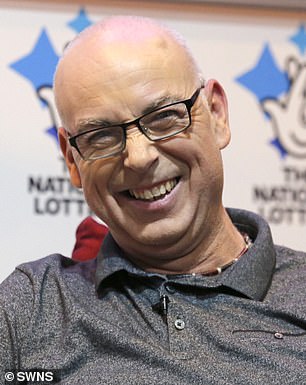 Mr Clark, pictured left on social media, said: ‘I’ve been self-employed for 10 years. I’m going to start working on my own projects’

Mr Clark said the Nissan dealer said to them, ‘are you those £76 million winners?’ as they purchased their new car, but they decided to stay quiet.

He currently lives in a home worth around £200,000 but has put a deposit down on a new four-bed house.

‘We haven’t gone too extravagant,’ he said. ‘It’s a nice, bigger family home.’

But Ms Fairhurst said she has no immediate plans to give up her job as a catering assistant at Boston Pilgrim Hospital.

She said the win will make a huge difference to her 14-year-old daughter who has special needs and will need help to live independently when she is older.

‘This will set her up for life,’ she said. ‘I can pay for private care for her and residential care when she gets a bit older.’

Mr Clark, meanwhile, is taking time off until the spring.

He said he has never like working in the winter and is now looking forward to planning holidays to destinations like Mauritius, the Maldives and Hawaii.

He said: ‘I’ve been self-employed for 10 years. I’m going to start working on my own projects.’

He had been building an extension for his niece Louise, but said: ‘I’m going to stop doing that now. She will understand. She is going to benefit a lot from the money.

‘They will get other people in to do the extension. It will probably get done a lot quicker.’ 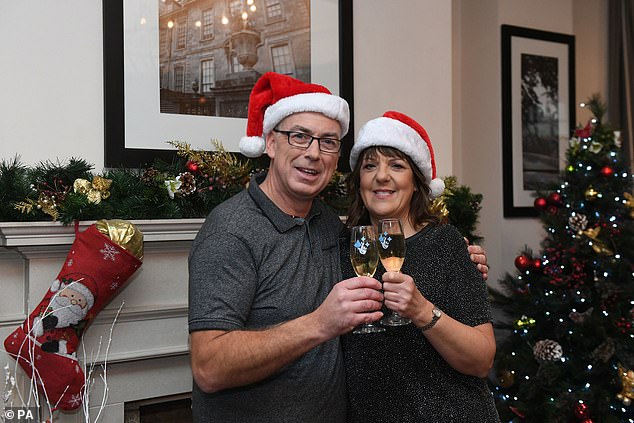 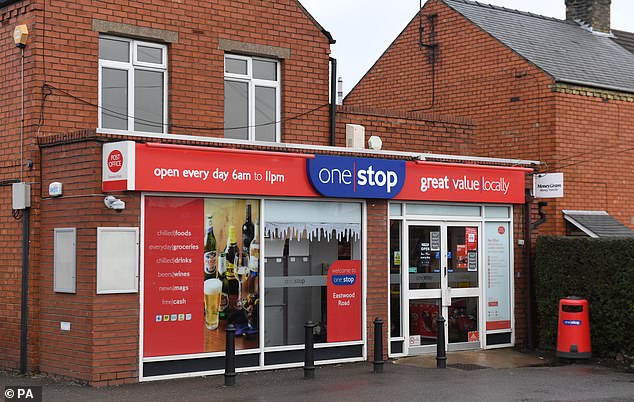 He and Trisha said ‘the best thing about the win is how we can help all our family’.

Mr Clark added: ‘It almost feels like some magical Christmas story, the man who nearly lost £76 million! For all our family, I’m very pleased that Trisha and Louise nagged me to check those tickets.

‘This Christmas is going to be a quiet affair, but next year will be a different story. 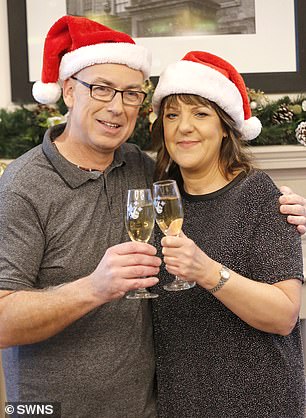 ‘Trisha and I have this vision of hiring a big lodge or hotel so that the whole family can get together and swap stories about how they’ve spent their share over the past 12 months.

‘This win isn’t just about Christmas magic, it’s about creating a lifetime of magical moments for all those around us.’

The builder said despite his £76million haul, he will continue to play the lottery, adding: ‘I won’t stop doing the lottery.

‘I don’t do any other gambling but I will still buy my £1 scratch card.’

When asked about being relaxed about the win, he said: ‘This is me. We’re very down to earth people. Trish will keep me grounded.’

He added: ‘Trish bought a Nissan Quashquai. She’s not a car person but that’s what she wanted.’

Mr Clark, who used to make parts for Mercedes Formula One, added: ‘Perhaps now I can buy one.’

He admitted his new house has a big garage so he can now indulge his love of cars and bikes.

Asked about Christmas presents, he said: ‘Everyone will still get the same pair of socks that they were all supposed to get.’

Trisha added: ‘I’m sure they will help us spend it. They money will benefit them for life.’ 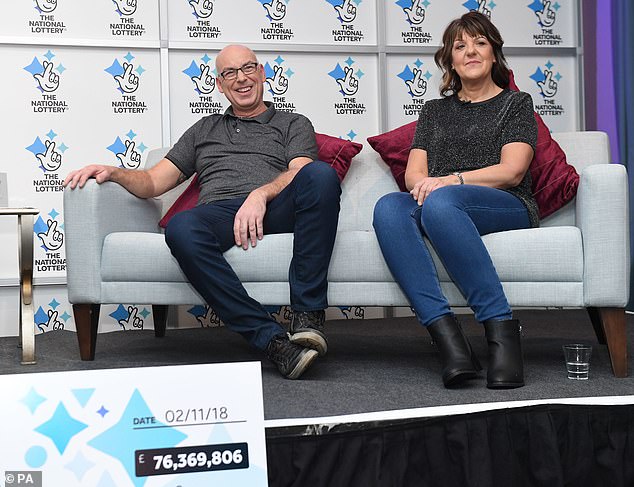 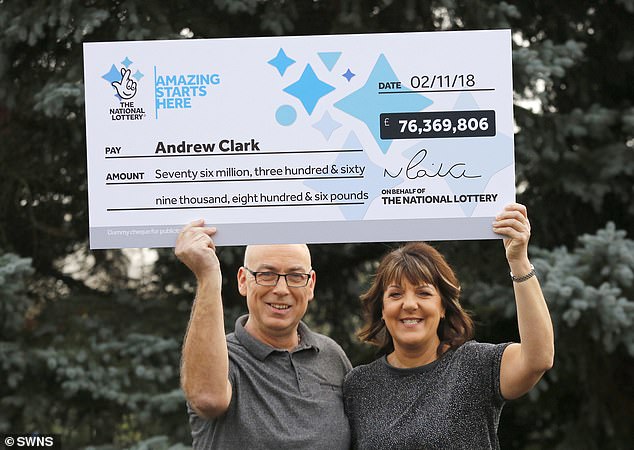 The ticket was bought from Eastwood Road Post Office in Boston on November 2.

With Andrew claiming the ticket, a frantic six-week search for the winner comes to an end.

The National Lottery deployed ad vans to the area to encourage the winner to come forward, and even enlisted local town crier Steve O’Dare to spread the news.

The biggest winners on the EuroMillions lottery so far in the UK were Colin and Chris Weir, from Largs, North Ayrshire, who took home £161 million in July 2011.

Earlier this year, one lucky ticket-holder, who chose to remain anonymous, banked a £121 million jackpot in April while another took home just over £77 million in February.

Fred and Lesley Higgins, from Aberdeenshire, scooped the £57 million jackpot in the draw on July 10. 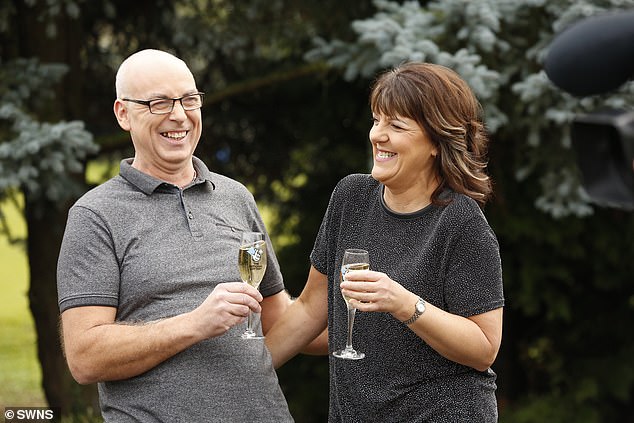 With Andrew claiming the ticket, a frantic six-week search for the winner comes to an end 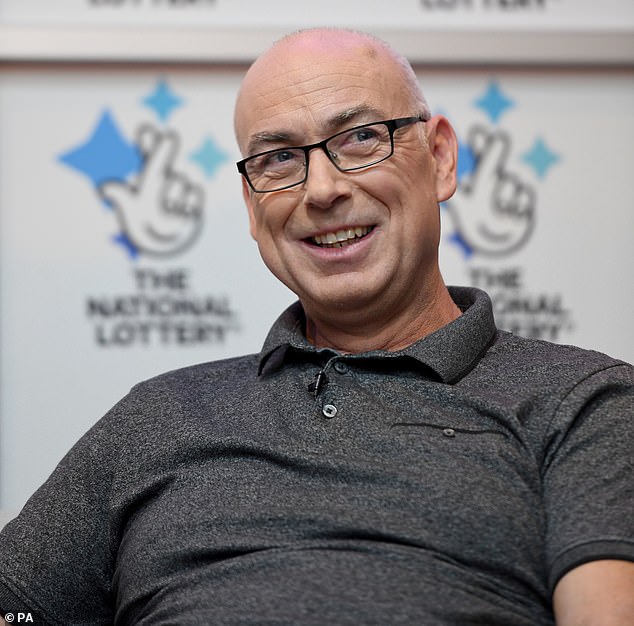 It will be a very happy Christmas for Mr Clark, who is the recipient of the 12th biggest win ever in the UK

Who is the biggest ever UK lottery winner? Two couples and a former car mechanic top list

The couple, who have been married for 30 years, said they were ‘not scared’ of the wealth because they were going to have ‘so much fun’ with the money.

The pair, a retired TV cameraman and a retired psychiatric nurse, from Largs, in Ayrshire, said their children Carly, a photography student, and Jamie, a call centre worker, would be bought their own homes and cars.

The family made a £1million donation to the SNP shortly after winning.

The marriage ended just 15 months into their new jackpot winning lives, citing the stress of the money as the reason they needed to split.

At the time, a spokesman for Mrs Bayford said: ‘Gillian Bayford confirms that her marriage to Adrian has broken down irretrievably and they have separated.’

It came after Mrs Bayford was forced to deny she had an affair with the couple’s gardener, Chris Tovey.

Adrian and Gillian Bayford, from Suffolk, took home more than £148 million in August 2012

3. An unnamed ticket-holder claimed just over £113million in October 2010, and chose not go public.

Neighbours in Croydon described he and partner Nicky Ottaway moved out ‘almost overnight’ after they scooped the EuroMillions jackpot last March.

Mr Trotter admitted at the time that he was like his namesake, Del Boy Trotter from Only Fools And Horses.

5. A couple from Cambridgeshire, Dave and Angela Dawes, won more than £101million on their third go on the EuroMillions draw in October 2011.

Mr Dawes said he ‘didn’t sleep a wink’ the night of the win, as it was too late to call Camelot after the couple checked their numbers.

Last year, the couple were taken to court by his son, an Afghanistan veteran, Michael Dawes, 32, who said he was ‘ungenerous in spirit’.

But a judge ruled the millionaire father does not need to keep bailing out his son, who burnt through £1.6million in two years, and came back for more, failing to heed his stepmother’s advice to stop eating at the Ritz and go to McDonald’s instead.