A builder sparked a security alert by leaving top secret designs for Parliament at a Greggs in Westminster Tube station.

A member of staff at the bakery chain is thought to have picked up the plans and skimmed over them, before deciding to give them to the police.

The documents have since been passed along to workers at Westminster, who are investigating the security breach.

The Palace of Westminster is undergoing a restoration and renewal, after Parliament spent over £369million on maintenance work since 2016.

A member of staff at the bakery chain is thought to have picked up the plans and skimmed over them, before deciding to give them to the police (file photo)

Builders were sent to pick up the plans from the bakery on Thursday morning, one day after they were left by the worker, but they had already been given to the police.

A House of Commons spokesperson said: ‘Documents were left by a contractor outside of the parliamentary estate but have now been returned.

‘The House of Commons takes the matter seriously and is currently investigating this incident.’

A friend of the Greggs worker told The Sun: ‘As soon as they realised what it was they handed it in – luckily no member of the public saw what was inside.’

A Met Police spokesperson said: ‘On 12 August, a police officer at the Palace of Westminster took receipt of documents found by a member of public.

‘These were passed to staff at the Palace of Westminster who are investigating the incident.’

Inspections and surveys have started at the Palace and will take place over the next two years, with urgent work also being undertaken to protect its heritage.

Once the architectural designs have been agreed upon and investigations are complete, the plans and costs will be passed to the House of Commons and House of Lords for a final decision.

The location has previously been the target of a terrorist attack, after PC Keith Palmer was stabbed to death while guarding the main vehicle entrance — Carriage Gates — by terrorist Khalid Masood on March 22, 2017.

During the attack Masood, 52, also killed four pedestrians and injured around 40 on Westminster Bridge by ramming a car into them. 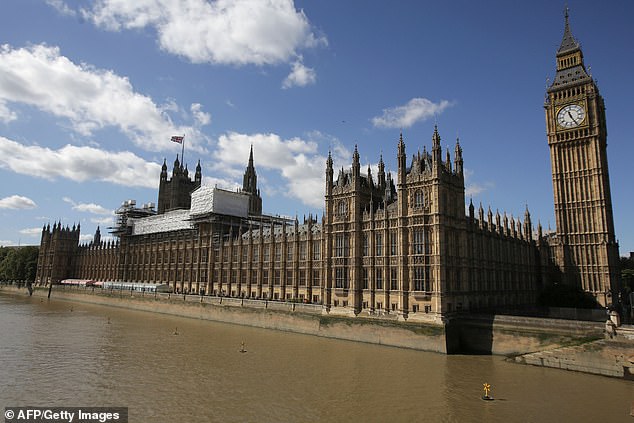 Inspections and surveys have started at the Palace of Westminster and will take place over the next two years, with urgent work also being undertaken to protect its heritage (file photo)

It was the first of a number of fatal Islamist attacks carried out on or close to bridges over the Thames between 2017 and 2019.

Deputy Speaker Lindsay Hoyle told MPs that afternoon: ‘The House is now suspended, but please wait here.’ The main entrance was closed off and the sitting remained suspended for another 35 minutes.

Once proceedings resumed, the former Leader of the House of Commons, David Lidington, said: ‘I hope the House would agree that, in the current circumstances, it would not be right to continue with today’s business’, before they were adjourned.

On April Fool’s Day last year, semi-naked climate change protestors stormed the public gallery and glued themselves to the glass.

Three days later, the House of Commons session was suspended when water flooded into the chamber due to a roof leak.

During Prime Minister’s Questions in May 2004, then-PM Tony Blair was hit with condoms full of purple flour, lobbed from the galleries by Fathers 4 Justice activists.

The group said they carried out the stunt to draw attention to MPs’ apparent inaction when it came to helping fathers get access to their kids through courts. The Sitting was suspended for over an hour by the Speaker.