Bulgarian Prime Minister Boyko Borissov has become the latest leader to test positive for coronavirus as the eastern European country grapples with a spike in new coronavirus infections.

The European leader, 61, who had self-isolated late on Friday, said today he would stay at home for any treatment, as recommended by his doctors, after testing positive for the virus.

Mr Borissov, who met Keith Krach, U.S. undersecretary of state for economic affairs, on Friday has informed the U.S. Embassy in Sofia of the situation, the head of Sofia health inspectorate said.

The announcement comes as Bulgaria, like many other European Union countries, saw a steep rise in new infections.

On Sunday there were 1,043 new cases reported in the country of seven million people, bringing the total number of positive cases to 37,562 and the number of deaths to 1,084.

Bulgarian Prime Minister Boyko Borissov, 61, said on Sunday he would stay at home after testing positive for coronavirus

It also comes as Europe’s daily cases crossed 200,000 in a day on Friday after doubling in just ten days, with many countries setting records and governments torn between fighting the virus and keeping the economy alive.

The government press office said Mr Borissov would be able to carry out his duties and was in constant contact with his ministers.

Mr Borissov had self-isolated late on Friday after he was informed that a deputy minister who he had been in contact with five days ago had tested positive.

Health authorities lifted the Prime Minister’s quarantine late on Saturday after two negative results from coronavirus tests, but then he tested positive on Sunday.

In a post on his official Facebook account, Mr Borrissov said: ‘Although my quarantine was lifted, since Friday I have postponed all my meetings and planned public appearances for the coming days.

‘After two PCR tests, as of today I am positive with COVID-19,’ he said. ‘I have a general malaise. For the moment, on the doctors’ discretion, I remain on home treatment.’

It was not immediately clear if he was already receiving a specific treatment.

Health Minister Kostadin Angelov said on Facebook he was self-isolating because he met Mr Borissov on Friday.

Meanwhile Energy Minister Temenuzhka Petkova and Transport Minister Rosen Zhelyazkov, who attended the meeting with the U.S. official, said they too were self-isolating. 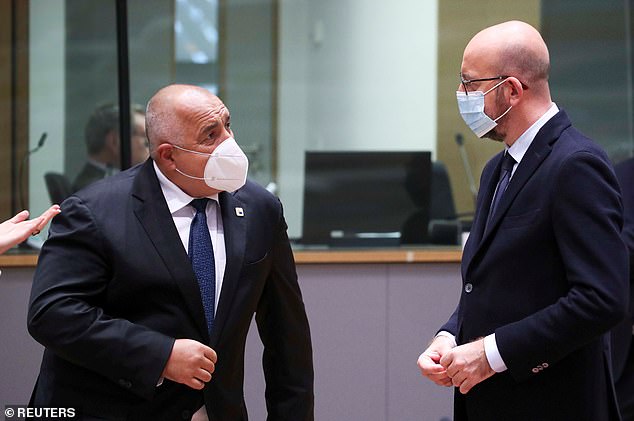 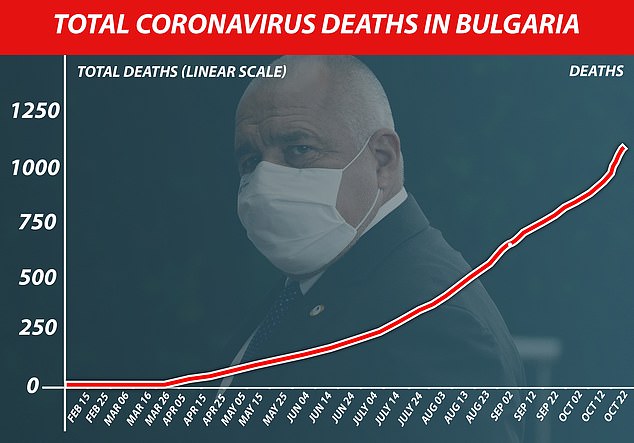 The eastern European nation has seen a spike in coronavirus cases and has recorded a total of  1,084 deaths so far 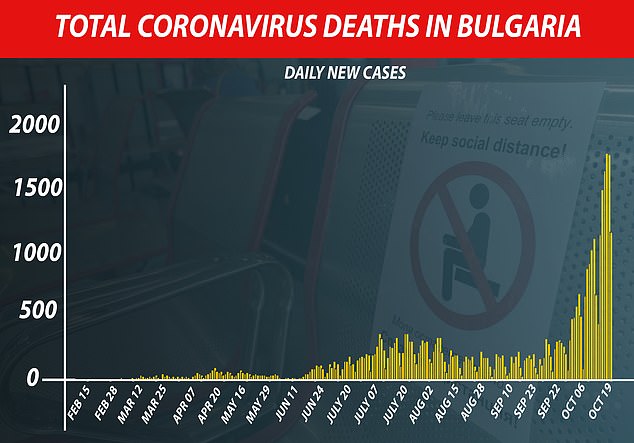 On Sunday there were 1,043 new cases reported in the country, bringing the total number of positive cases to 37,562

Bulgaria’s capital Sofia and other cities across the country have closed nightclubs for two weeks.

Mr Duda, 48, said on Saturday in a recording published on Twitter that he was not experiencing coronavirus symptoms ‘but unfortunately, the test result is absolutely unambiguous.’

In a message on social media the leader said: ‘I would like to apologise to all those who are exposed to quarantine procedures because of meeting me in recent days.

‘If I had had any symptoms of coronavirus, please believe me, all meetings would have been cancelled.’

The president’s diagnosis comes amid a surge in confirmed cases of coronavirus-related deaths in Poland, a nation of 38 million that saw very low infection rates in the spring. 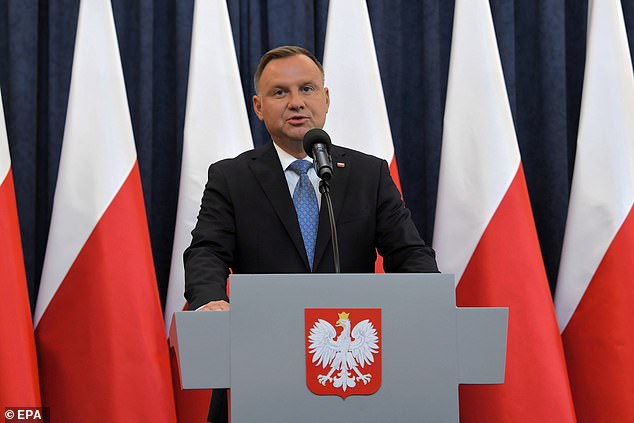 It comes just a day after Polish President Andrzej Duda, 48, said that he had tested positive for coronavirus

Poland on Saturday reported 13,628 new confirmed cases and a record 179 daily number of Covid-19 deaths. The daily case count was the nation’s second-highest of the pandemic after a record number set Friday.

On Friday, the Polish leader visited the National Stadium in Warsaw, which is being transformed into one of the field hospitals.

He also bestowed state honours on Iga Swiatek, the 19-year-old Polish tennis player who won the French Open this month, and her father and trainer, Tomasz Swiatek.

Duda and the Swiateks wore masks and gloves but stood very close and shook hands as the president fastened honorary pins on them.

Iga Swiatek said she and others on her team had no symptoms but would go into quarantine following Duda’s positive test. She said they are tested regularly and would be tested again in three days.